The classic dungeon crawler returns with a fresh visual style and lots of changes.

If Pokemon Sword and Shield haven’t been to your liking or you just simply want more Pokemon, then Pokemon Mystery Dungeon: Rescue Team DX should suffice. It’s out on March 6th for the Nintendo Switch and serves as a remake of Pokemon Mystery Dungeon: Red Rescue Team and Blue Rescue Team. These are a pair of dungeon crawlers where the player leads teams of Pokemon into different missions. These take part in dungeons which are randomized and full of wild Pokemon to battle. Throw in hunger mechanics, housing, and much more and you have a fairly different experience from the mainline Pokemon games.

For veteran players though, what’s changed in Rescue Team DX? Let’s take a look at 15 of the biggest differences between the remake and the originals. 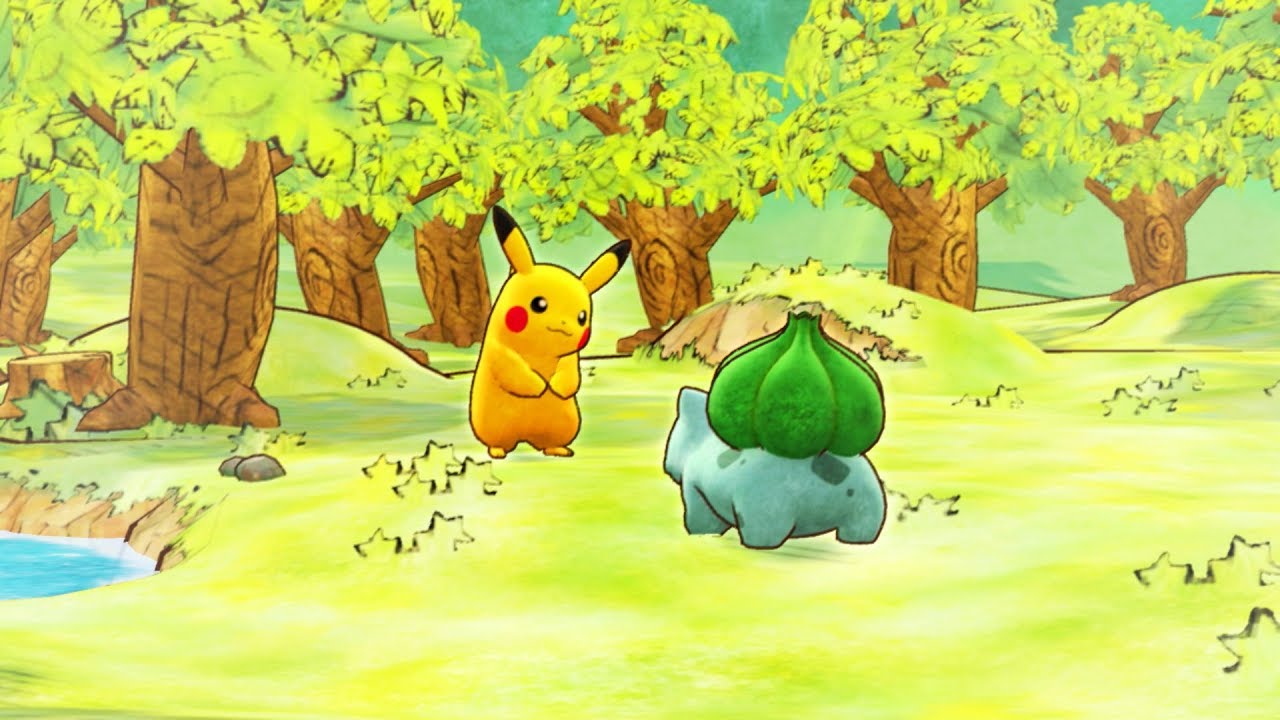 Obviously the biggest change is the visuals. Utilizing fully 3D graphics, the art-style is a mix of watercolor-like textures and a bright palette. The effect makes for more vibrant looking environments, which helps liven up the combat and exploration in equal measure. Pokemon also look more detailed and have better animations, which is a given with the jump in styles. 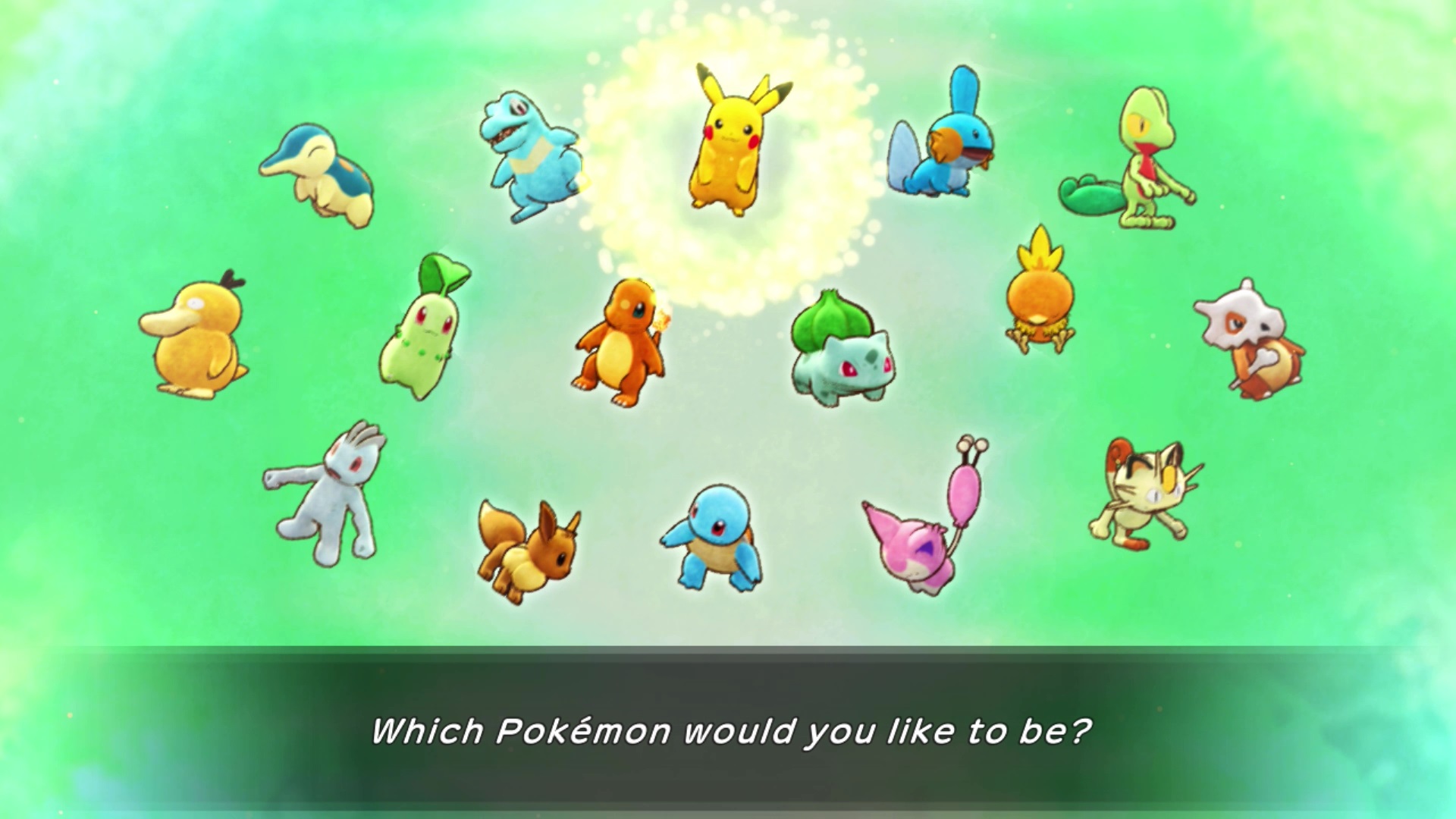 The good ol’ quiz returns in Rescue Team DX, allowing players to determine which Pokemon is best suited for them by answering different questions.  You can manually choose as well so don’t worry. Unlike the original games though, the name of the main character, your partner and the rescue team members can be changed. 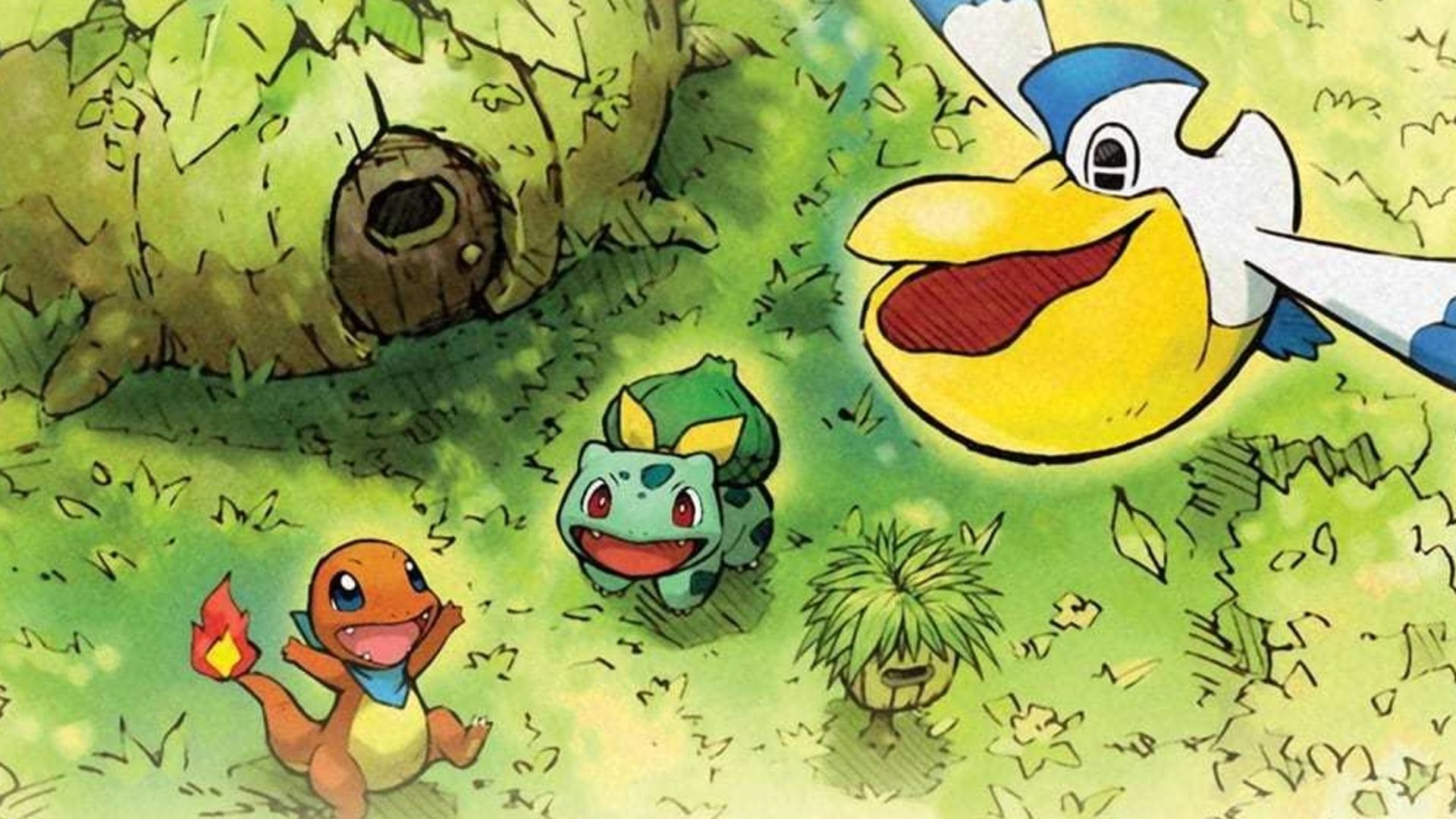 If you’re on the fence about picking up the title, then there’s a free demo on the Nintendo eShop. Reports indicate that it’s almost two hours long. That’s enough time to see the prologue and do quite a bit of dungeon crawling. The demo ends before fighting the first boss but that should be just enough time to try out the gameplay. 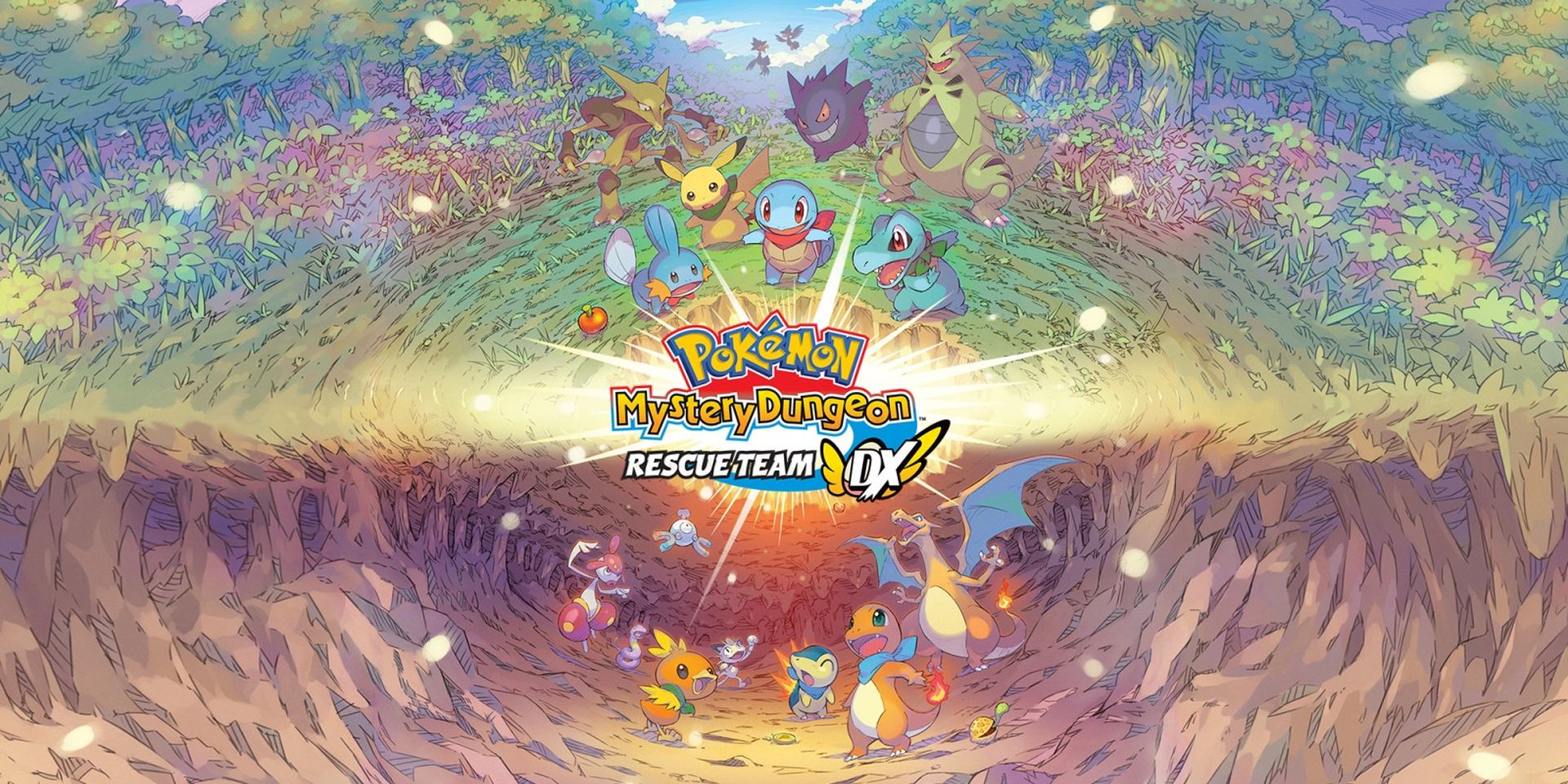 Like with the mainstream Pokemon titles, Pokemon Mystery Dungeon: Rescue Team had two versions – Red Rescue Team and Blue Rescue Team – each with their own exclusive Pokemon. Rescue Team DX seemingly combines both rosters while introducing plenty of new Pokemon to shake things up. 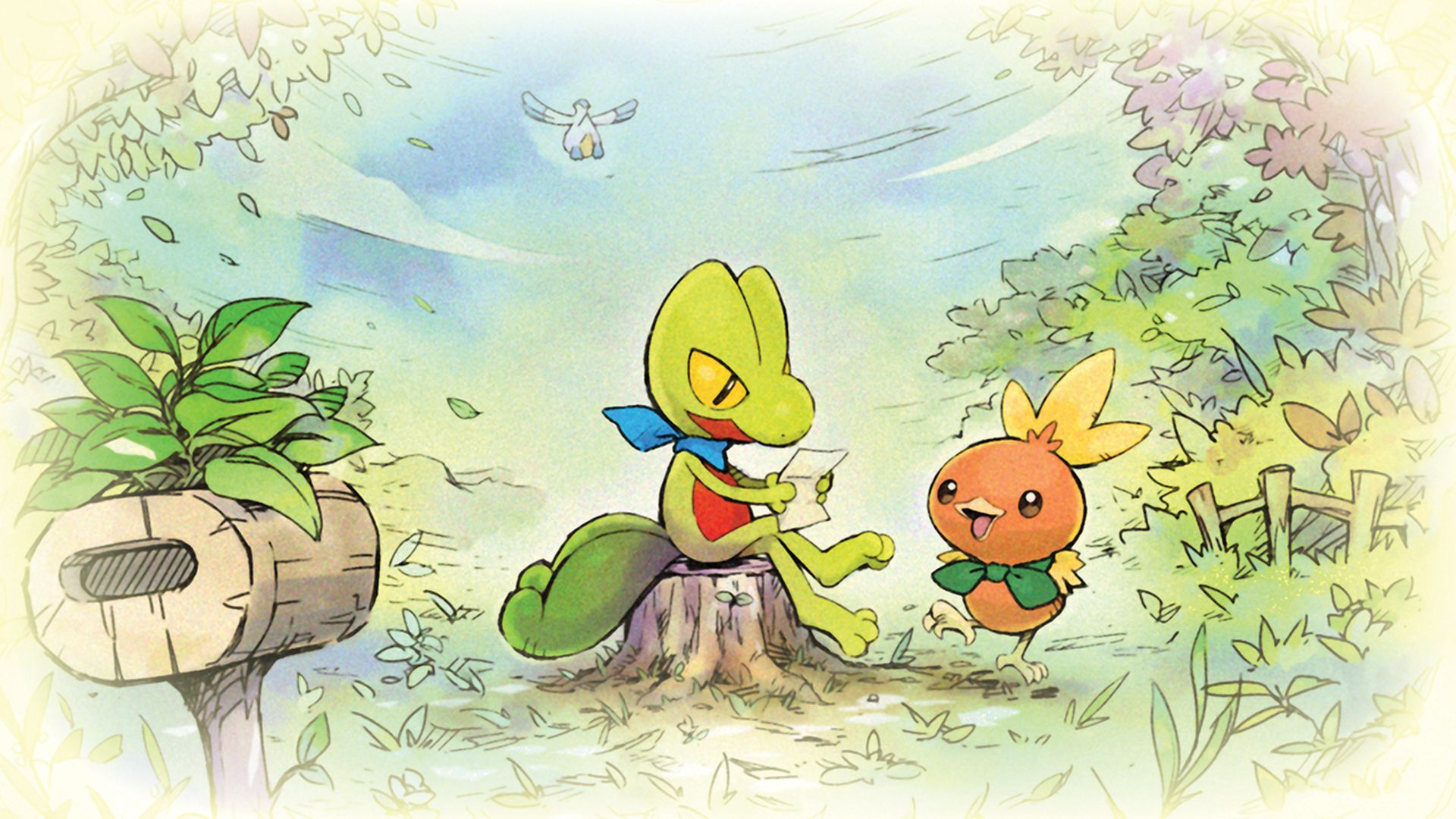 We’ve learned of some of the new Pokemon added to the remake. We saw Lucario, who was previously in the original titles as a statue, being recruitable with other new additions including Porygon-Z, Sylveon and Honchkrow. A number of Pokemon have also been added thanks to another unannounced feature, namely…. 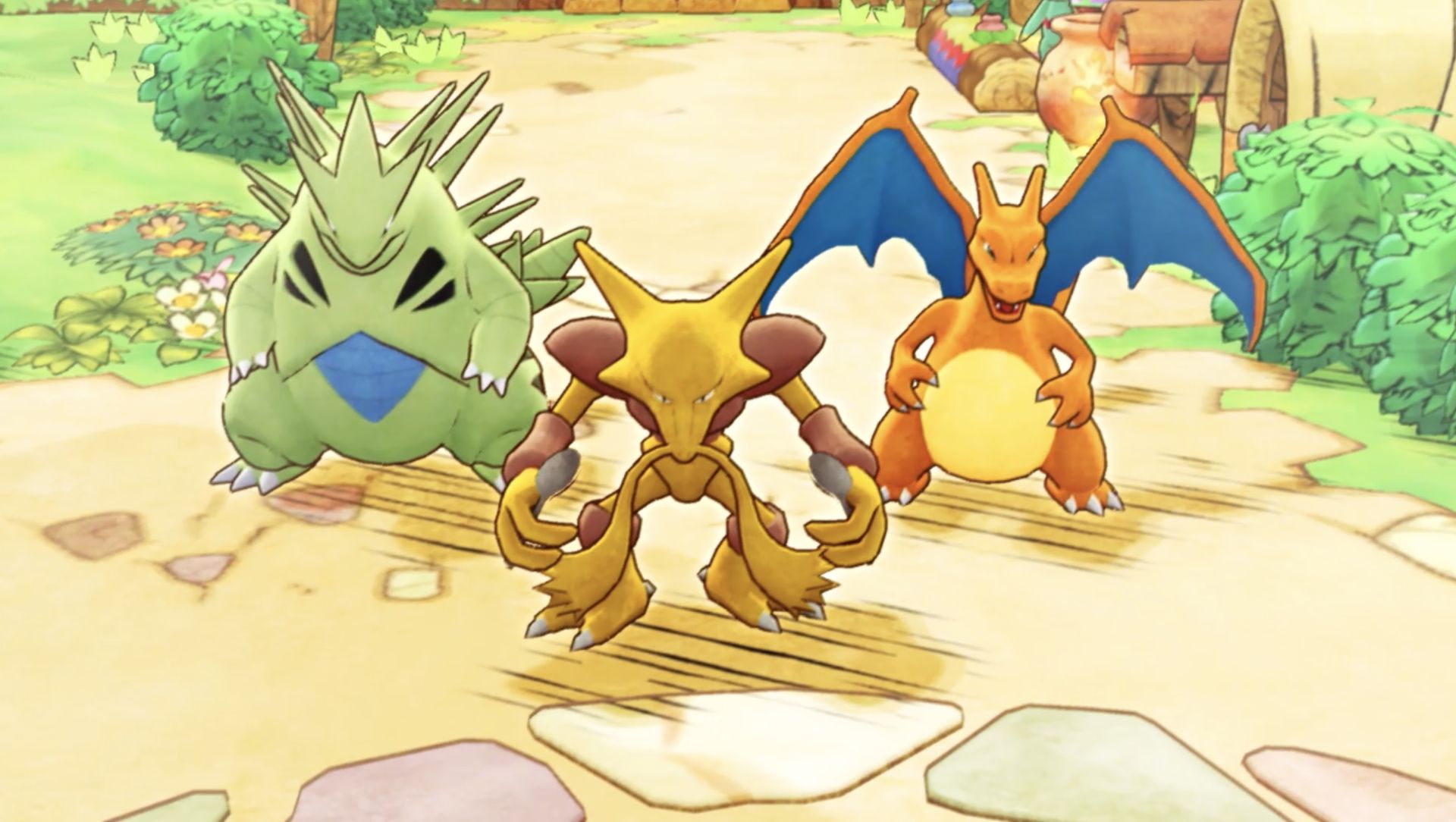 The Pokemon Company hasn’t officially announced it yet but Mega Evolutions are in Rescue Team DX. It makes sense when you consider that Pokemon Super Mystery Dungeon, a later game in the franchise, added them in. So look forward to Mega Evolutions of Venusaur, Gengar, Pidgeot, Charizard and many, many more. 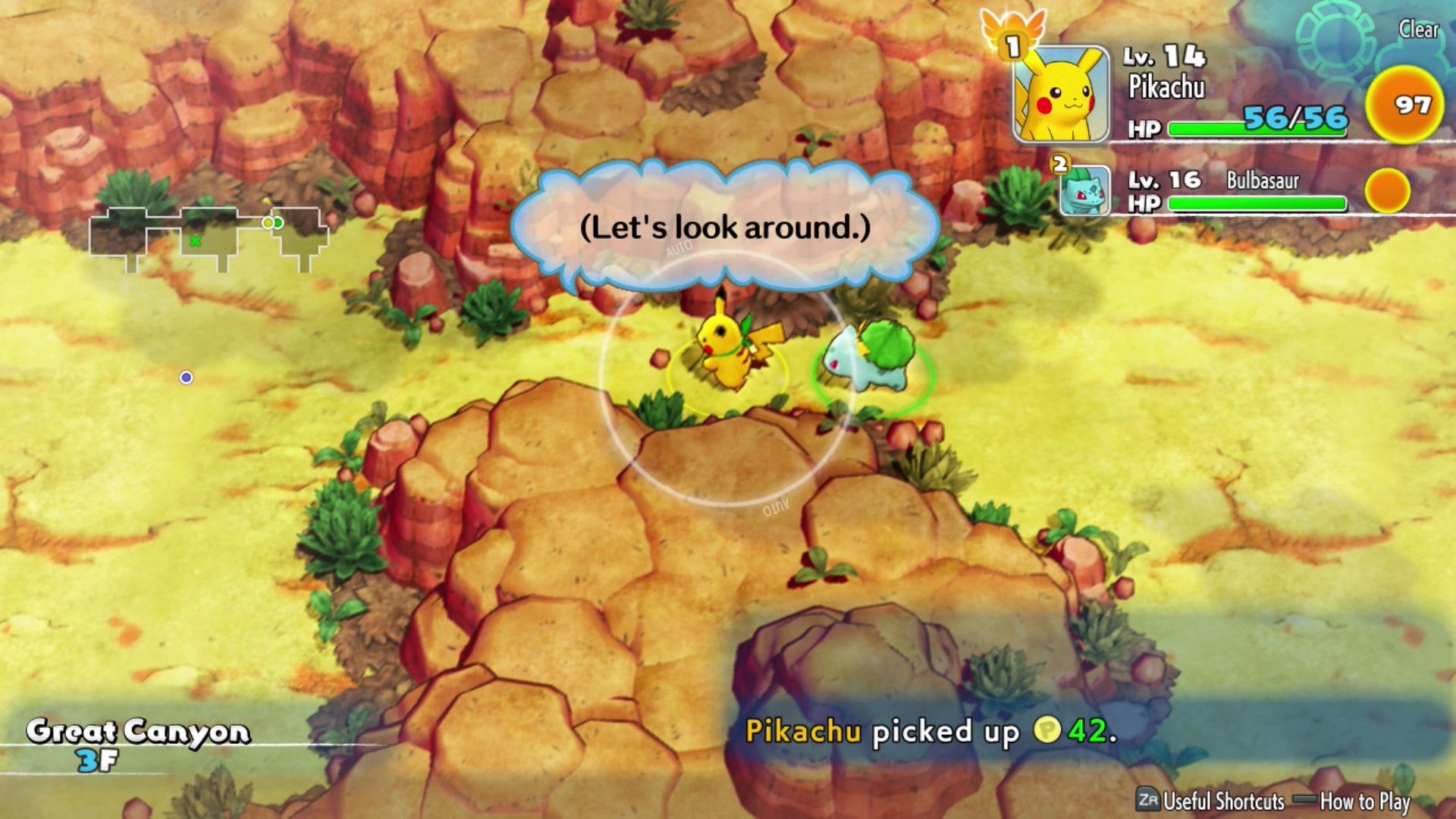 Praise be to auto save, which is now a core feature. No longer will you need to open a menu and find the “Save” button to keep progress. The manual save option is still available though, if you want to be extra careful. Simply press X, select the “Others” menu, then “Save and Go to Main Menu” and you’re good. 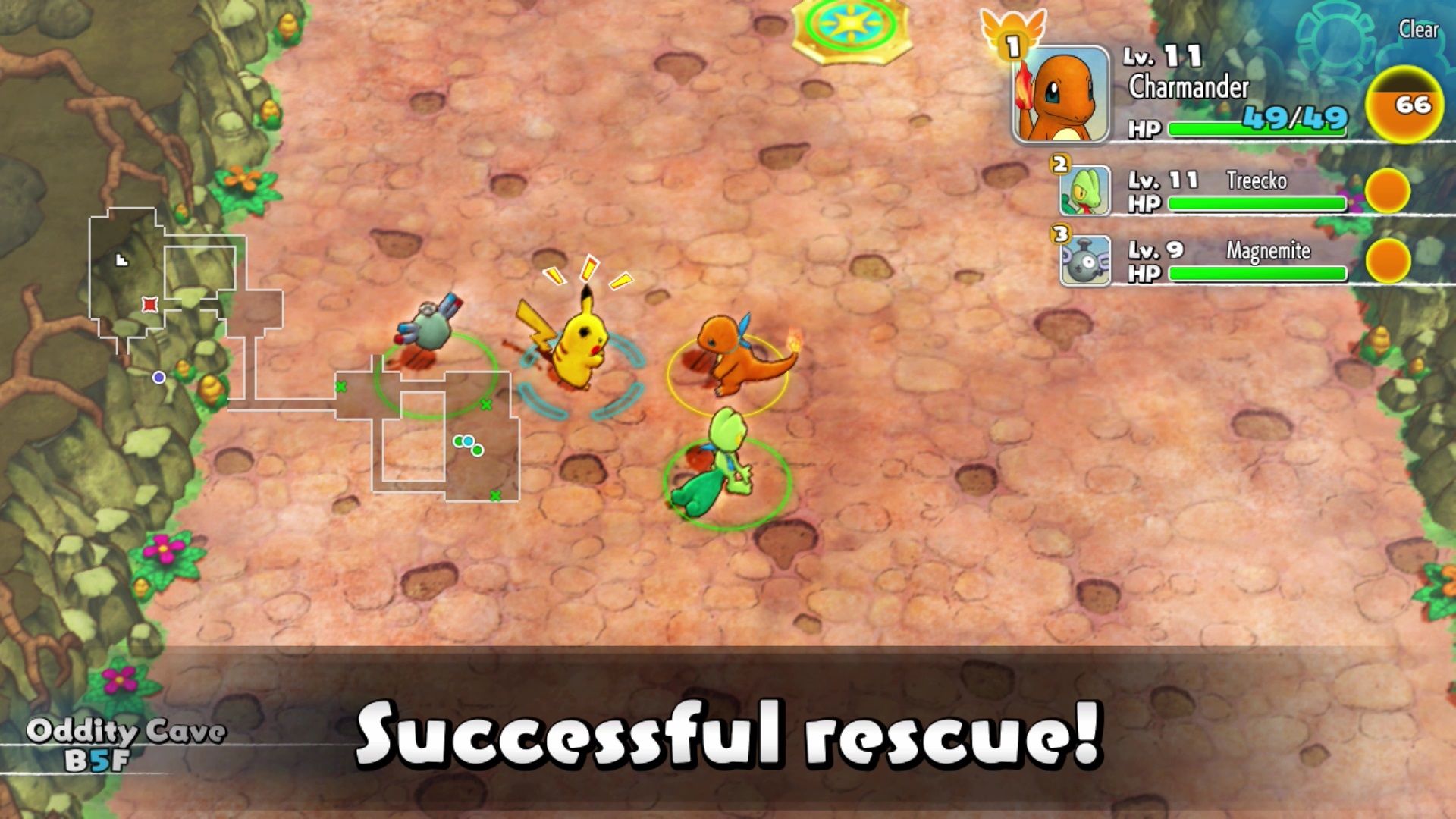 While you can move through areas in the same tile-based sense, you can also use Auto Mode. By pressing ZL, your team will move “efficiently”, which means they’ll keep moving without your input. If you encounter an enemy, Auto Mode is turned off and you’ll proceed as per normal. Auto Mode can be switched on and off as per one’s preference.

Press A to Win

Not sure which is the best attack to use on an enemy? Rescue Team DX helps simplify things. By pressing A, you’ll automatically select the most optimal move in a battle. It’s not a bad option especially for those who want some chilled out dungeon crawling. This can be disabled if you’d prefer doing things the old-fashioned way. 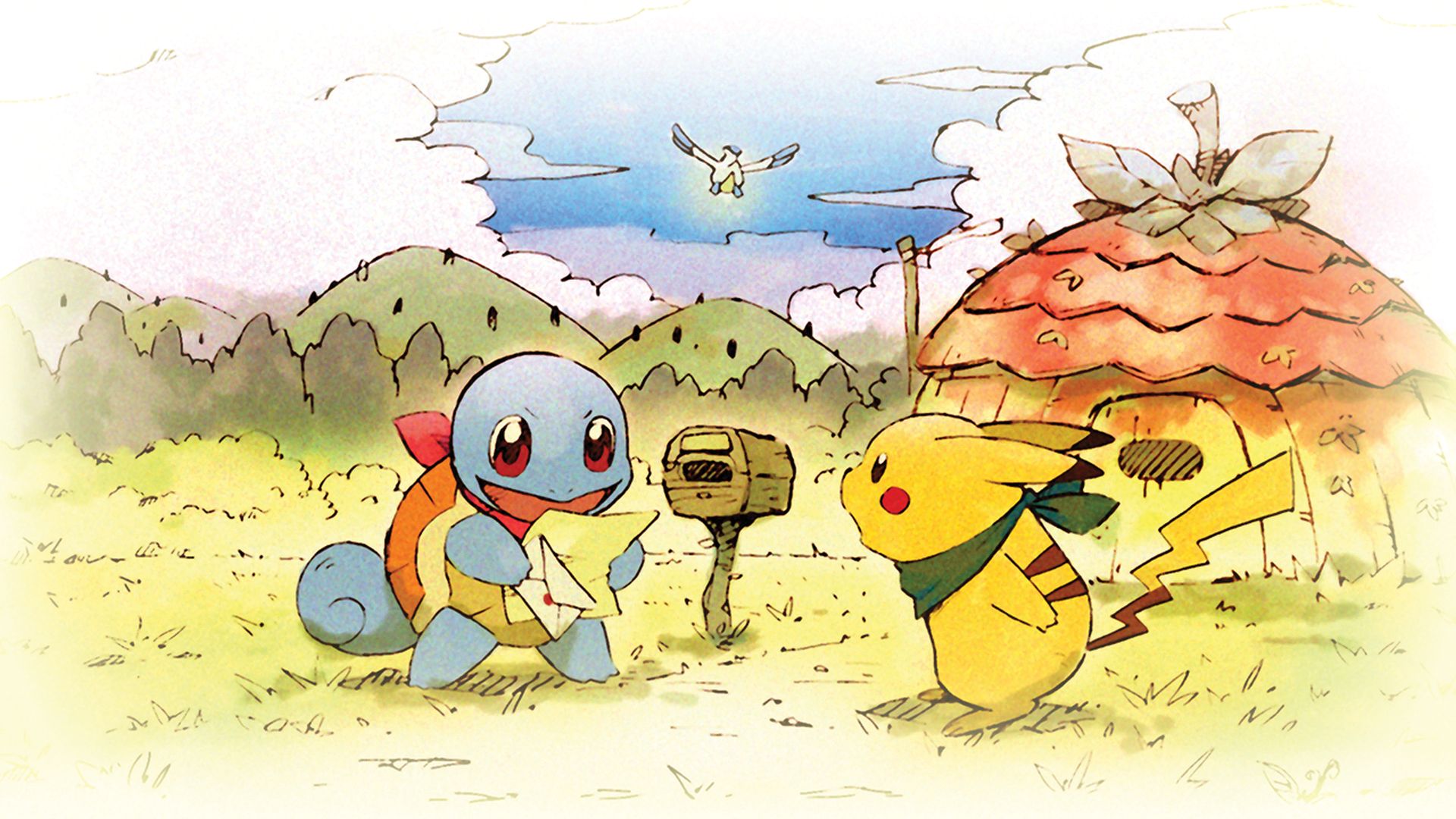 In the original games, the Friend Bow was a special item. Found at Mount Faraway, it would increase the recruitment rate of Pokemon by 10 percent. In Rescue Team DX, it serves the same purpose. However, the description states, “It’s also said that Shiny Pokemon will want to join you, too.” It’s not yet known whether each recruitable Pokemon has an increased chance to be a Shiny with the Friend Bow equipped or whether Shinies can acquired by other means. But they’re definitely in the remake. 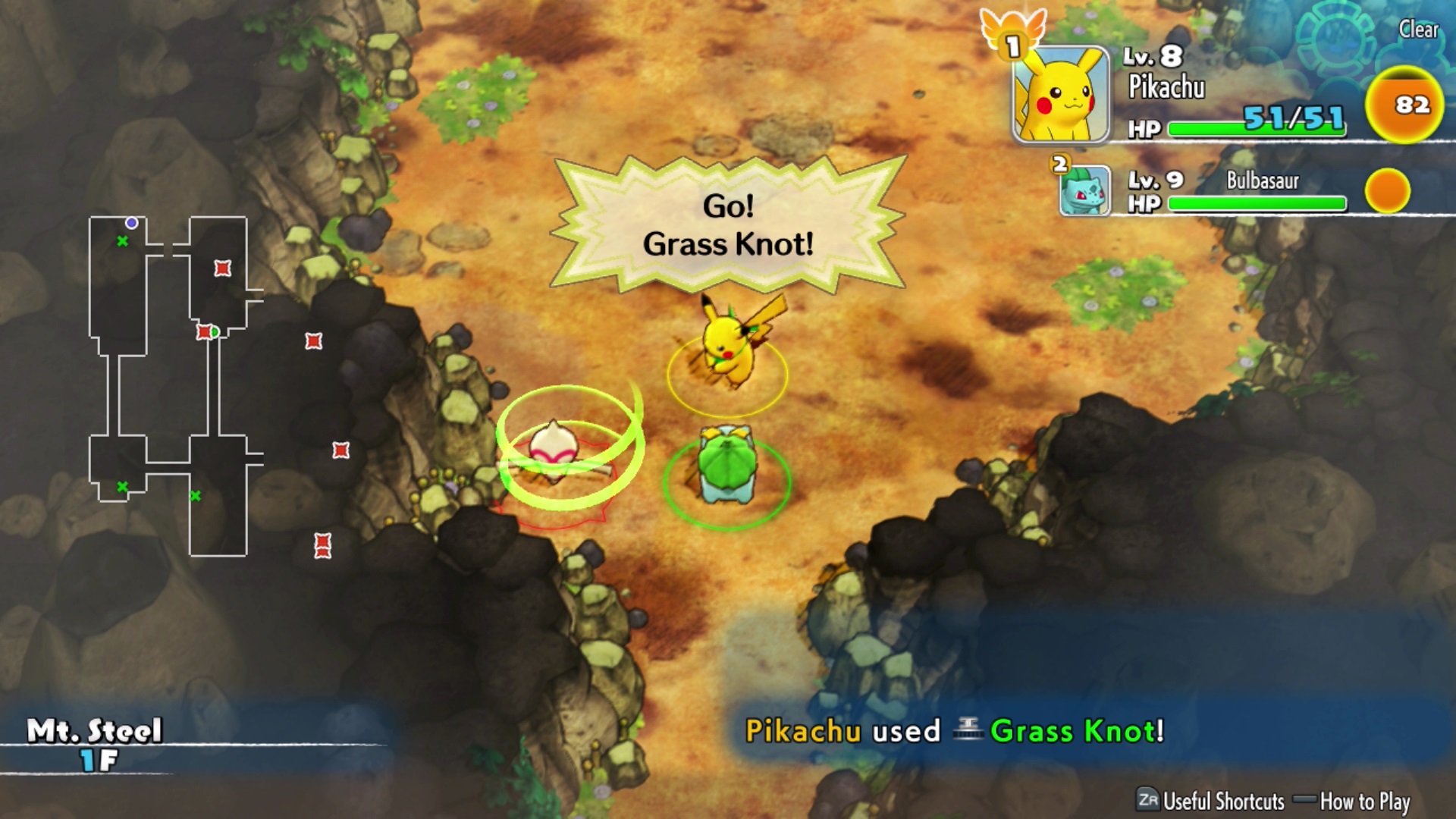 The previous games allowed for the leader Pokemon aka you to venture into dungeons with only two other teammates. With Rescue Team DX, it’s possible to bring five more teammates along for a total squad of eight Pokemon. Overkill? Perhaps but on the other hand, who doesn’t want to roll up with the squad and stomp out foes? Besides, it’s only an option – those who prefer more challenging runs can go with the original three. 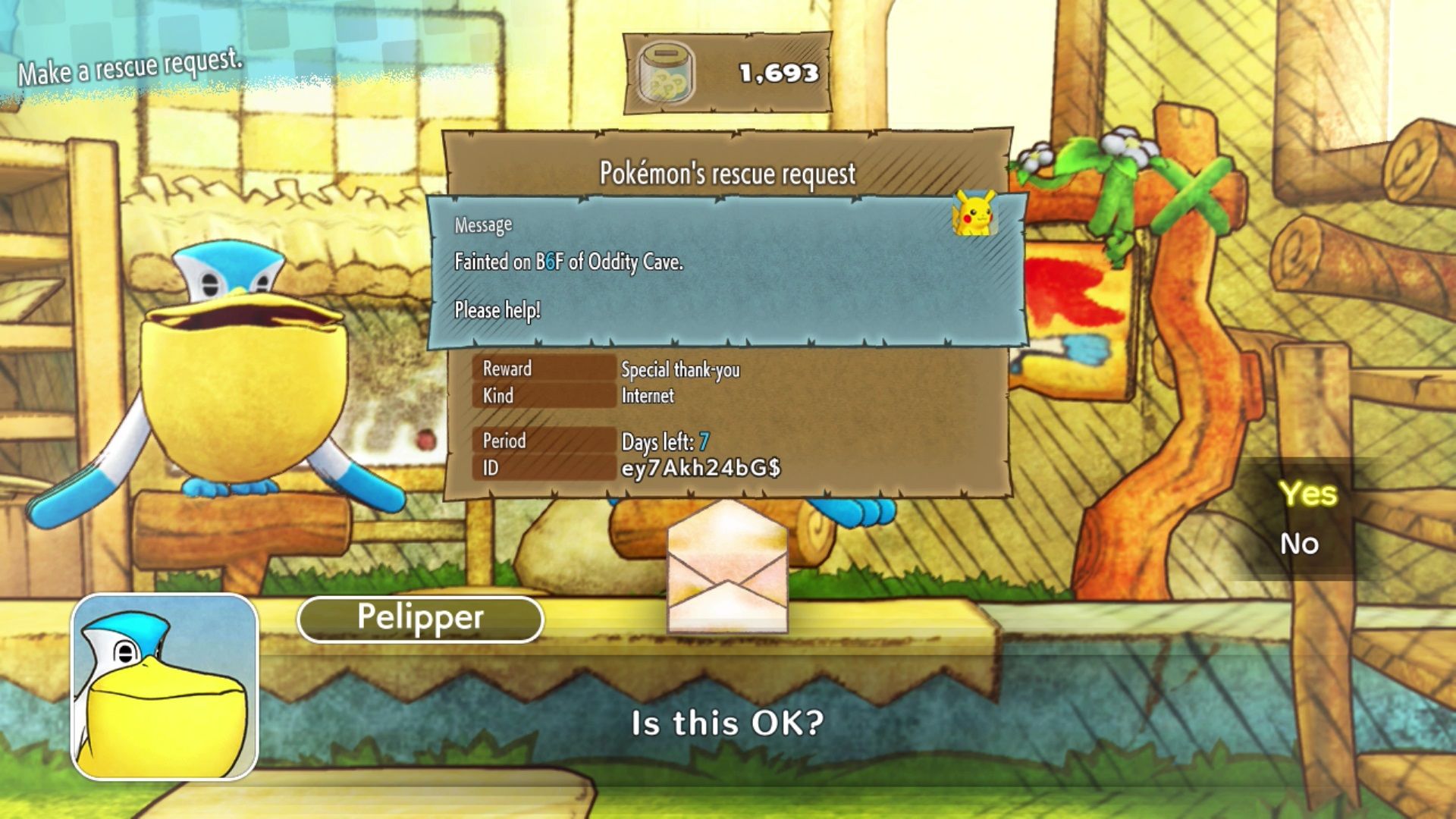 Throughout the story, you’ll take on different tasks to rescue different Pokemon. Who rescues you, if you happen to fall? The good news is that you can either have another team go in and save you or call other players for a rescue. Though the feature is new to Rescue Team DX, it’s actually from Pokemon Super Mystery Dungeon. 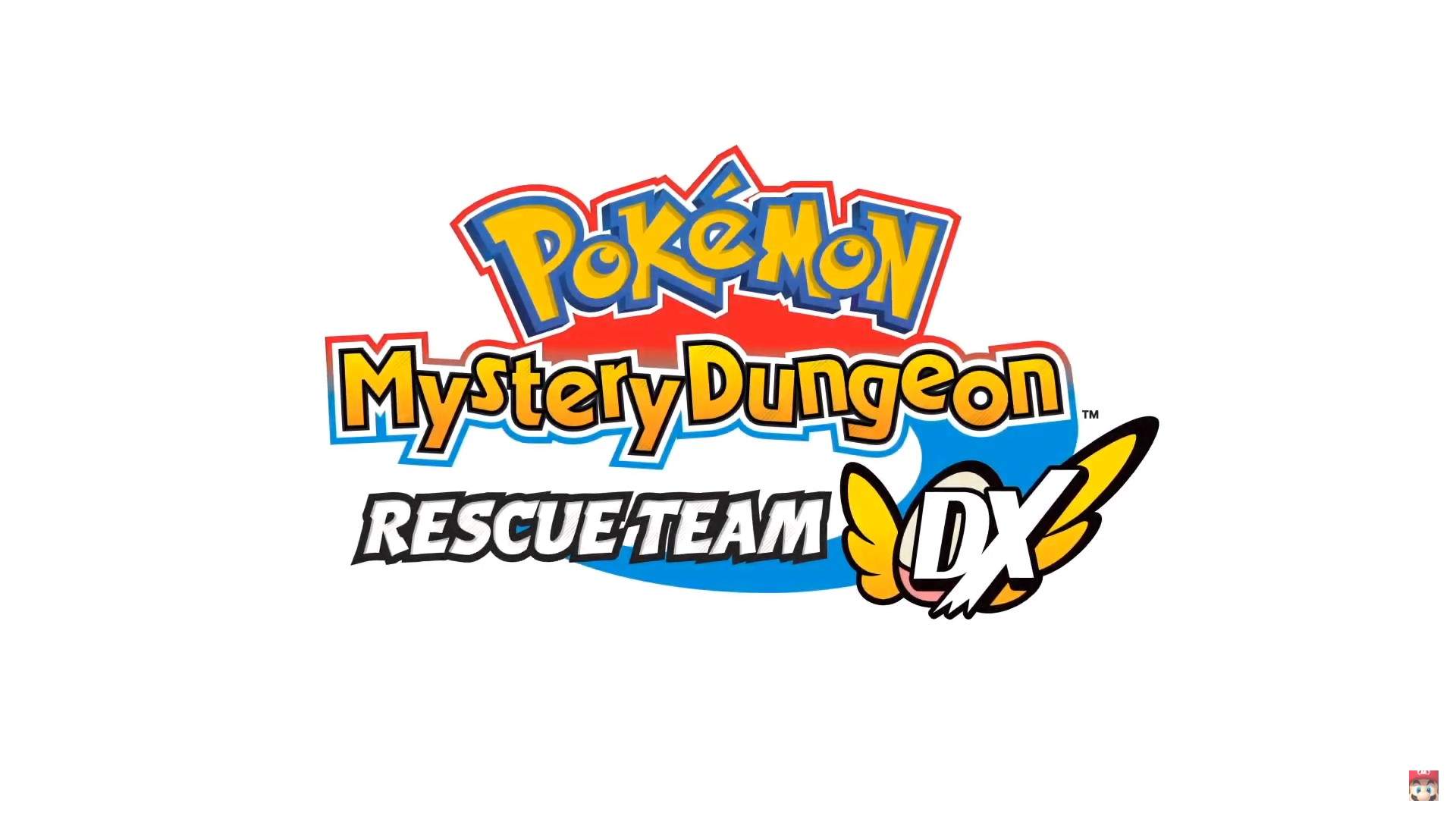 The Makuhita Dojo in Rescue Team offers several different mazes for Pokemon to battle through. Players can’t recruit any of the Pokemon battled in these mazes but they can recruit the boss Pokemon. More mazes are unlocked as one progresses through the game and they’re fairly decent challenges. In Rescue Team DX, the Makuhita Dojo is largely the same but offers increased experience. However, now only one Pokemon can enter and you have a time limit. Different tickets can influence conditions and it’s now seemingly more of a challenging side-activity, which is nice. 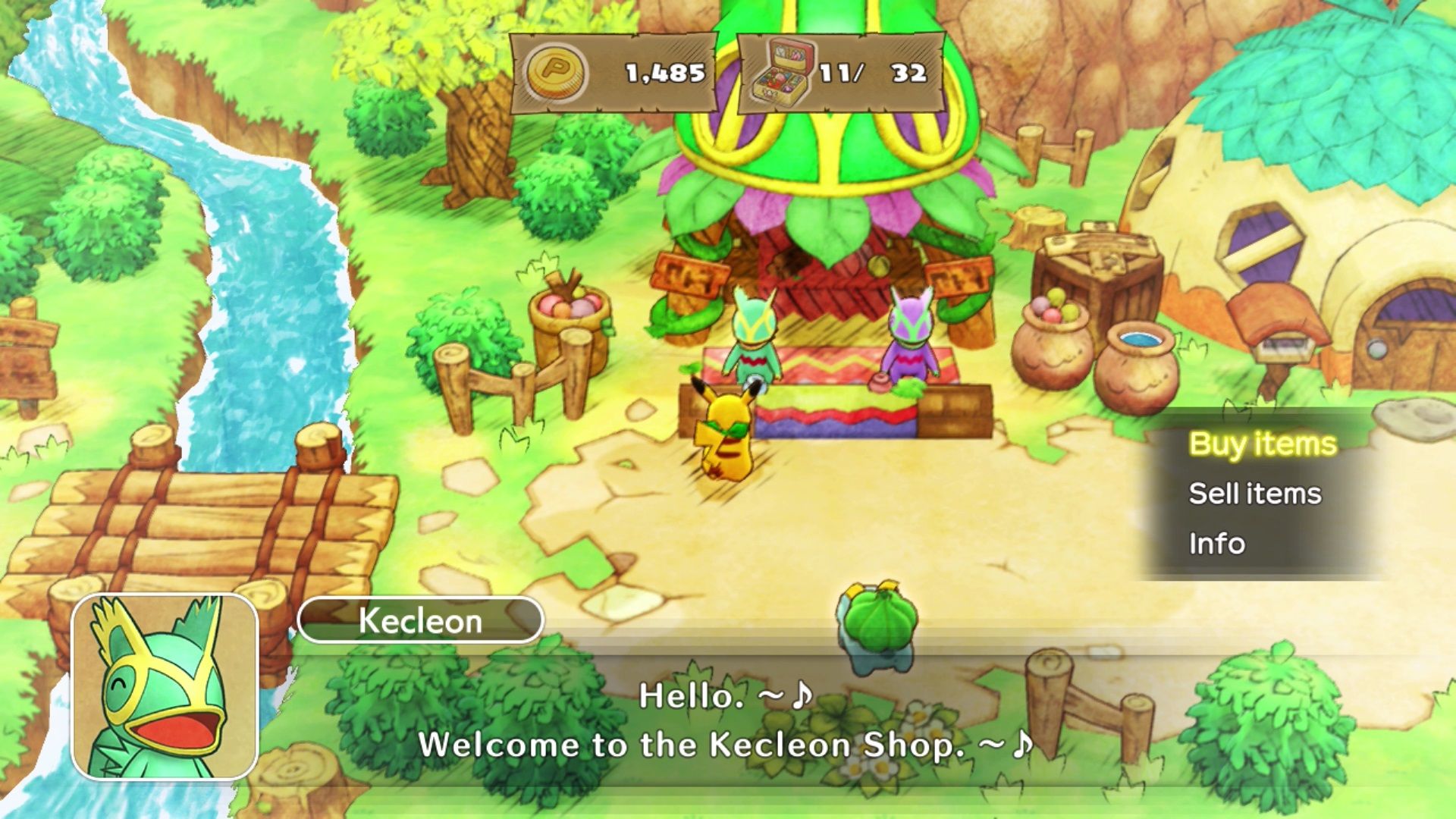 Other gameplay changes can be seen in the recycling of Technical Machines or TMs and Plain Seeds. The former can no longer be recycled and are instead destroyed. As for Plain Seeds, recycling them results in a different Seed being produced. Alternatively, you can also get an Oran Berry which increases max health for a dungeon by 10 if a Pokemon’s HP is full (though it can also be eaten to restore 100 health).

No Basic Attacks or IQ Skills

Of course, not every change is going to be met positively. Basic Attacks are out completely and the IQ Skills have been replaced with Rare Qualities. The latter is gained when eating Rainbow or DX Gummis and confer different passive buffs to Pokemon. Examples include Blast Control, which reduces team damage from explosions, Funnel Fun to greatly speed up natural health recovery in corridors and much more. It’s a nice system to help specialize Pokemon all the more.