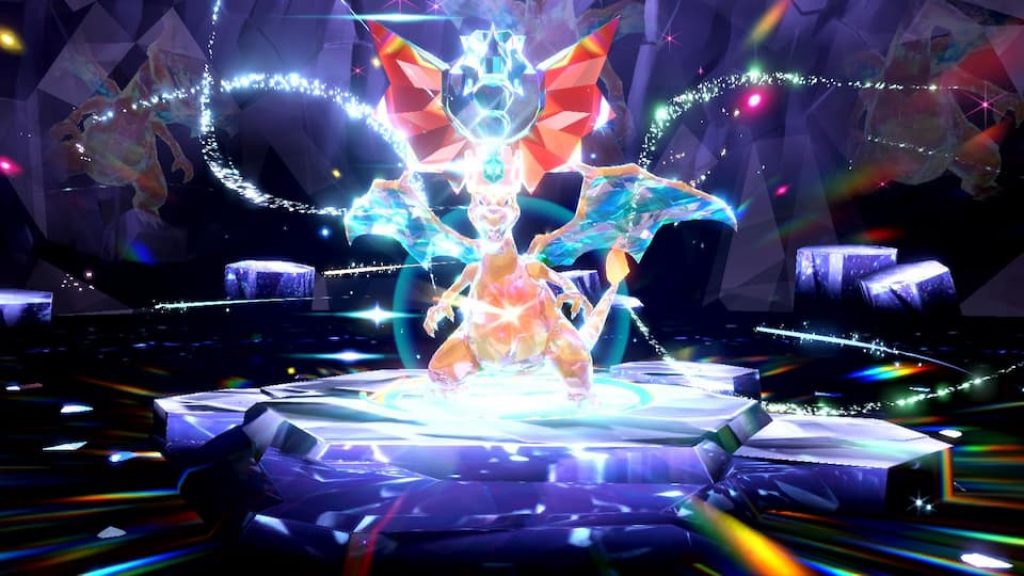 In addition to premiering a new trailer for the upcoming Pokemon Scarlet and Violet, over on the official Pokemon website, Nintendo and The Pokemon Company have also revealed details on the new Black Crystal Tera Raid Battles, post-launch raid events, and more.

Tera Raid Battles have, of course, been detailed previously, and as their name suggests, Black Crystal Tera Raid Battles will be unique variations accessible via black crystals found throughout the Paldea region. These battles will allow players to take on specific Pokemon or specific Tera Types of Pokemon, and as you might expect, they will be much tougher than regular Tera Raid Battles and offer much better rewards.

The first Pokemon to be added to Pokemon Scarlet and Violet will be Charizard with the Mightest Mark, which will be found at black crystals in a post-launch event across two periods- December 1-4 and December 15-18. “Charizard cannot normally be encountered in Paldea, and the Charizard appearing during this event has Dragon as its Tera Type, making it a formidable foe and powerful ally,” The Pokemon Company explains.

Meanwhile, Pokemon Scarlet and Violet will also see frequent post-launch Tera Raid Battle events. Accessible via crystals shining with a “mysterious aura”, these will also allow players to take on specific Pokemon or specific Tera Types of Pokemon. It’s also been revealed that the first Tera Raid Battle event will focus on Grass, Fire, and Water types for Eevee, and will run from November 24-27.

Finally, it’s also been confirmed that if you have save data from any previous Switch Pokemon title – Pokemon Sword and Shield, Pokemon Legends: Arceus, Pokemon Brilliant Diamond and Shining Pearl, and Pokemon Let’s Go, Pikcahu! and Let’s Go, Eevee! – you will also receive special in-game Rotom Phone cases in Scarlet and Violet with designs inspired by whichever game you have save data for.

Pokemon Scarlet and Violet are launching for the Nintendo Switch on November 18.