Being a business mogul is hard work. There are long hours, financial risks, and a lot of bumps along the road. You never know if a risk will pay off, and if it doesn’t, you could be financially ruined. Now take all of that responsibility and transfer it back 500 years to the colonial days of the Caribbean, and that’s where you find yourself in Port Royale 4. You’re in charge of trading, managing towns, and even navigating countries at war and naval battles to ultimately make your business as successful as possible. On paper, it’s an intricate set of systems to keep yourself and your country on top, but in practice, it’s too often a slow, repetitive journey whose long stretches of downtime overshadow sparse exciting moments.

As the head of your 16th century business, you play as a god hand over the ships, convoys, and towns in the region. After a long-winded set of detailed tutorials, you’re given free reign to begin a campaign or create a sandbox free play world. In the end, Port Royale 4 is effectively a business simulator, so your goal is to make money and keep your entrepreneurial dreams alive. To do this, you have a few options. First and foremost, you are in charge of trading commodities between towns. In the classic economic idea of supply and demand, the lower the supply of a commodity in a town, the more that town is willing to pay for it. Towns that have higher supply, especially those that produce a commodity, will sell it at a lower cost, allowing you to buy and sell at a profit. Though there are some deeper systems at play, this mechanic is not particularly complicated. If a town’s supply of a commodity has two green bars, they’re at an optimal level. Any more than two and they want to sell; any fewer than two and they want to buy.

"On paper, it’s an intricate set of systems to keep yourself and your country on top, but in practice, it’s too often a slow, repetitive journey whose long stretches of downtime overshadow sparse exciting moments."

Trading is straightforward enough, but being the best way to profit, it’s easily the most important and fleshed out mechanic. To ramp up your trading, you can set up trade routes for your convoys of ships, automating and expanding your trading capabilities while forcing you to be mindful of the impressive dynamic wind cycles that slow down or speed up your ship’s movement. You can have as many of these going at once as you’d like, and once you find profitable routes, they become gold mines.

What I don’t like about trading is its simplicity and repetition. Even when done manually, it can almost entirely be boiled down to seeing which towns have fewer green bars for certain commodities and selling to them. There’s little nuance and little to truly manage, and even though you are finally allowed to set manual prices and could probably spend hours tinkering with prices and quantities to optimize trade routes, default buying and selling values are almost always enough to make a profit. It’s certainly satisfying to watch your cash increase as you sit back, which you’ll have to do a lot because of how slow the default fast forward options can be, but it’s little more than watching a number climb.

Also part of your managerial duties is the oversight of towns and local businesses. Towns around the area are each under the purview of one of the four major powers of the time: Spain, England, France, and the Netherlands, one of which you affiliate with before each campaign or at the start of your free play. All towns allow you to build sites for production of different commodities, both increasing the supply of that commodity in the town and employing a set number of workers. At a certain point, you can speak with the relevant viceroy and buy the right to be the administrator and take over all town responsibilities, which encompasses keeping residents happy, growing town populations, and avoiding problems like plagues and overcrowding. 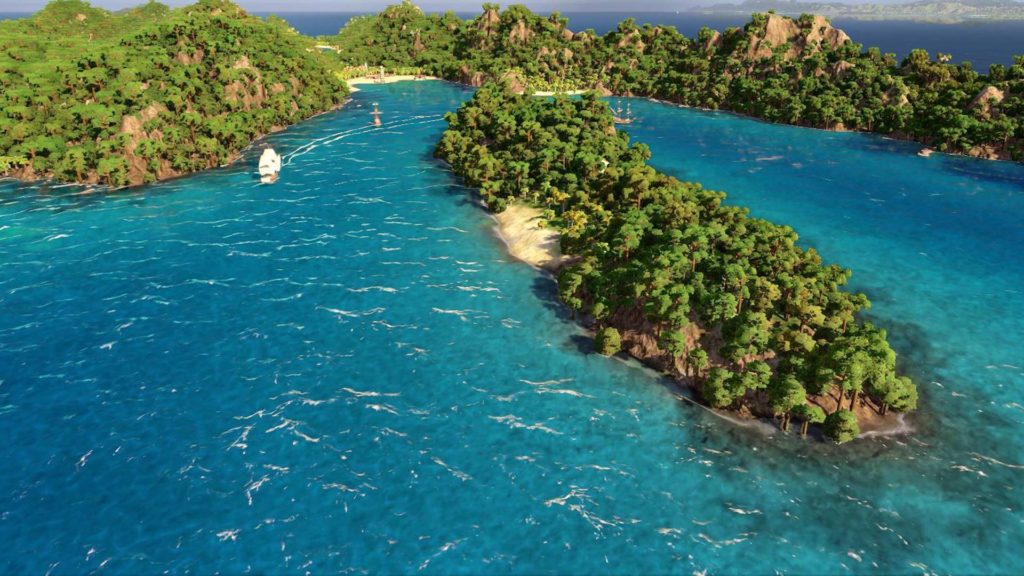 "What I don’t like about trading is its simplicity and repetition. Even when done manually, it can almost entirely be boiled down to seeing which towns have fewer green bars for certain commodities and selling to them."

Though I spent more time trading, I enjoyed the management of towns the most of any mechanic. Population satisfaction accounts for a lot of factors, and it’s an interesting challenge to manage producing enough commodities without angering the population and keeping enough happiness-inducing areas to keep them there. When managing multiple cities, it only ramps up the amount that you have to think about what should be produced where, especially because every town has a limit on commodity production. Sometimes the game will make it evident what you should do, but having so many miniature town simulators with such interplay makes it feel more like you’re truly running the show.

Naval battles are also part of the action, allowing you to fight either roaming pirates or captains from a country with which you’re at war, but this feels more like a forgotten mechanic than an important factor in gameplay, as battles usually boil down to which side has the higher strength number. If you do, you might as well automate the battle because you’re most likely to win, and if you don’t, you should probably back out and get stronger. If you do decide to take battles manually, you’ll find a pretty standard turn-based system. Each ship has an allotted number of spots it can move and can shoot from both sides of its ship. Ships can also perform set tactics, anything from repairing a ship to sending a kraken on the enemy, and the ultimate blow is to board a ship and take it out of the fight entirely. You can loot ships and take some resources, but any benefit from these battles is almost negligible, and I found these fights uninspired and took almost any opportunity to avoid them.

The campaigns, one for each country, are much more structured. After a brief starting cutscene, each starts small in scope and broadens along the way, giving you some series of tasks to improve your business and build your empire. For the most part, though, the on-rails nature of many of the tasks makes it difficult to come out of your shell and make it your own. Most tasks, given by your country’s viceroy, give very specific instructions for what to do next, instead of allowing you to figure out a way to do so on your own. It’s usually “build X number of Y production sites in town Z” instead of anything that gives you much freedom to choose your path. As the four campaigns can take upwards of 20 hours total to finish, it’s frustrating to have such a large part of it feel so linear and allow you to go through the motions without much thought. There are a few parts that strike a great balance between allowing you freedom to operate and giving you a set goal, but it often misses the mark. The campaign is clearly meant to be a stepping stone to get your feet wet before going into free mode, but it’s hard to ignore how much of its long playtime is so underwhelming. 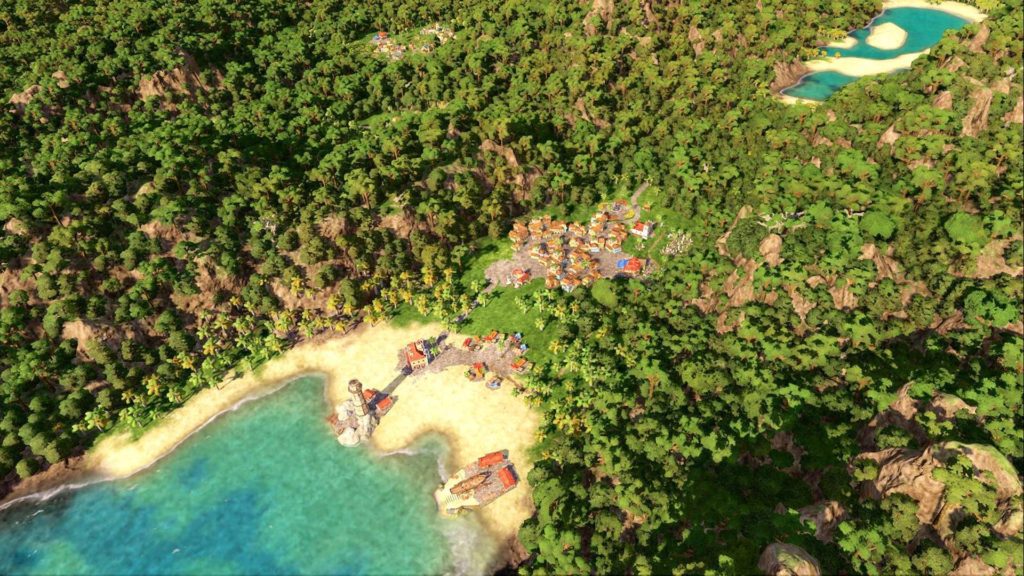 "Naval battles are also part of the action, allowing you to fight either roaming pirates or captains from a country with which you’re at war, but this mechanic feels more like a forgotten step-child than an important factor in gameplay."

The free mode is where the game gives you freedom to set your own goals and create your own successes. It’s very unstructured and allows you to set your own course without much interference from the higher powers, and it’s the clear end game for anyone who wants to play this game for a longer period of time. Having less structure, it’s naturally less clear how to get going, but this is much more of a satisfying long-term experience, especially when you start to take over the entire region.

When it comes down to it, though, all of Port Royale 4’s gameplay is held back by the fact that I didn’t really enjoy any single aspect, and a lot of it can get either boring or completely static. Moments like the one where I had to literally put the controller down and wait for the computer to make enough money through trade routes for me to proceed with the campaign happen frustratingly often. Even though there are a lot of things to do, almost none of them really stood out as the game’s core strength. I’d trade here and build some production sites there, and some of the benefits can be mildly invigorating, but the vast majority of it was some combination of trading and waiting that I rarely felt invested in continuing. Even looking past the underwhelming parts of the campaigns, I was never really excited about coming back to the 16th century Caribbean. There are certainly a lot of complicated and dynamic systems at play in Port Royale 4, but too much of my time was spent looking for things that weren’t particularly worth finding.

Final Verdict:
AVERAGE
The complex systems at Port Royale 4’s core never flourish under the weight of its uninspired moment-to-moment gameplay and lack of structural balance.
A copy of this game was provided by Developer/Publisher/Distributor/PR Agency for review purposes. Click here to know more about our Reviews Policy.