Often imitated but never duplicated, Minecraft is a key player in gaming today and inarguably influential as it inspired the last several years of crafting elements in games. Portal Knights is one of the latest to be taking many obvious leafs from Minecraft, but decidedly puts its own RPG spin on it.

Most immediately, unlike Minecraft, there is some narrative structure to Portal Knights. A cataclysmic event shattered the world into many floating pieces, that are now connected through portals. You are a portal knight who travels through those portals in…well they refrain from giving you a specific quest for doing this, likely to encourage the kind of freeform approach Minecraft channels so effortlessly. 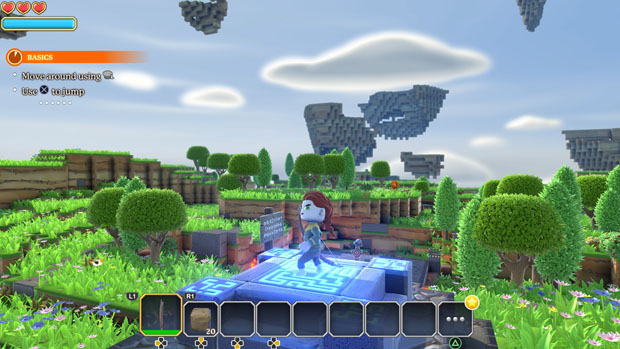 "There is the mining, crafting and what have you, but that’s also there in service of the light RPG elements at play."

As a blocky looking sandbox with building elements, the comparisons are impossible to avoid. However, Portal Knights does more than a few things of its own that both help and hinder the two distinct parts of its design. There is the mining, crafting and what have you, but that’s also there in service of the light RPG elements at play.

Before you begin, you’ll pick from three classes that dictate your style of combat and proficiencies, and design a custom avatar to represent you. You’re quickly dropped into your first world to learn all the usual basics of the crafting games in a freeform tutorial that shows the ropes of creating the basics and how to harvest key materials before trusting you to figure out further recipes on your own.

There are several different varieties of biome in the game that each randomly generate a different environment, giving a lot of visual variety and new things to find on each portal jump. Certain resources can only be found or grown in specific habitats, and it’s worth a cursory look around each floating island for a while before moving on to see every natural resource it has to offer. 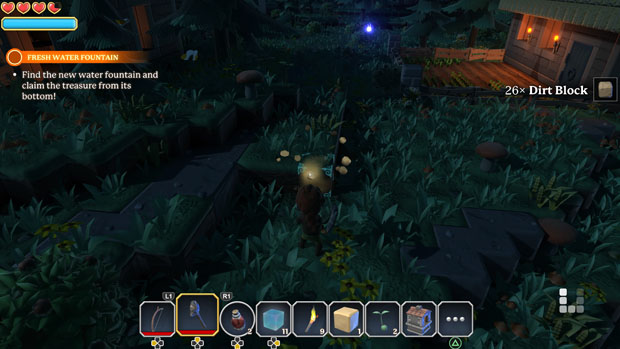 "The mobs might if anything, not be quite aggressive enough to match your combat ability."

Within the handful of environments that randomly generate each island, different mobs ranging from blobs of slime to spooky scary skeletons spawn in to ruin your day. The lock on combat system Portal Knights employs to allow you to take them on feels along the lines of 3D Zelda combat, if a little more simplified. The simple, yet satisfying combat loop of maintaining a good range then rolling out of the way is good for what it is, and building experience slowly adds new abilities and perks on top of that.

The mobs might if anything, not be quite aggressive enough to match your combat ability. You’ve got to get in fairly close or directly attack enemies to aggro them, and then they only ever go after you. Rarely did the situation ever call for an immediate potion and even if I did die all that it cost me was some of the money the monsters drop constantly.

The islands are naturally far smaller than any Minecraft world, and seem to be less dependant on specific rules as to where resources are found. This is one of several ways in which Portal Knights unfortunately trips over itself and contradicts its own mechanics. The local wildlife of each biome is totally uninterested in your stuff, just you. 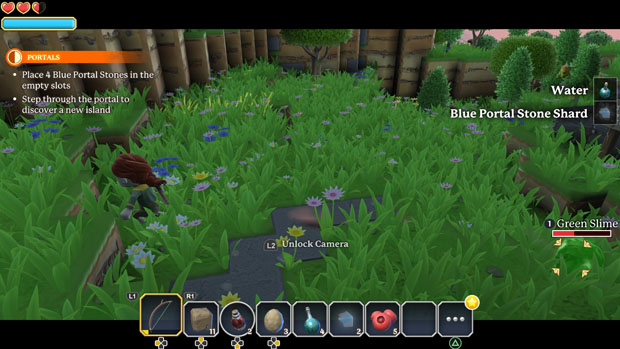 "Considering that with the lack of punishment for death and the nomadic nature of the game, Portal Knights never really fosters that ownership found in purer building games."

Considering that with the lack of punishment for death and the nomadic nature of the game, Portal Knights never really fosters that ownership found in purer building games. It’s far more productive to strip the lands of what you need, pack up any and all crafting tables and move forward. There are occasionally NPCs on the islands to ask fetch quests of you and boost your experience, which will be needed for the boss islands you’ll come across later which actually put some life in the combat, but outside of those the gameplay loop never changes and you’re never really incentivized to put down roots.

You have the ability to set a “home island” and might even return occasionally to previous levels for specific drops or resources, but there is rarely any surprise in doing so. If you do choose to put down roots, the game helps automatically apply pleasing texture to repeated blocks to take some of the effort out of making your castle look nice. The reasons for building any kind of grand structure at all however, as we’ve established, need to be more self-satisfying than normal. The enemy design literally doesn’t demand a home like other genre staples.

The art style has loads of colour and personality, giving even similar environments a unique identity through shading alone. It is basic, sure, but the deliberate style has its charm. The actual character models might be a little too basic, the chibi designs landing somewhere between the generic MySims and maliciously twee World of Final Fantasy, but it luckily doesn’t take too much away. The game controls smooth enough even on a controller, but just like king Minecraft, it comes across as more clunky and natural than a mouse. 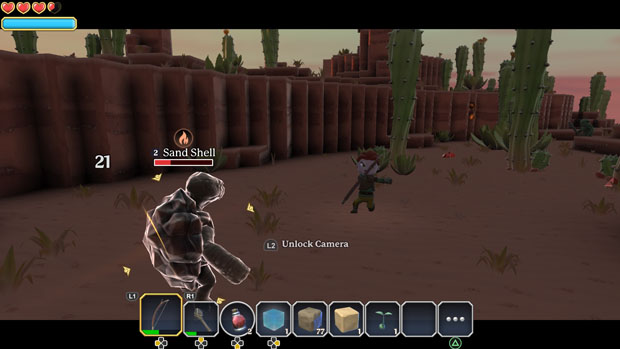 "Portal Knights is a solid effort at taking a super freeform genre and always giving the player something concrete to do, but that also places it at odds with itself in some strange ways."

Portal Knights is a solid effort at taking a super freeform genre and always giving the player something concrete to do, but that also places it at odds with itself in some strange ways. Some more aggressive enemies and the need to defend your stuff from them to create that ownership the genre excels at would have gone a long way to fixing it, but as a casual, relaxing little RPG, Portal Knights offers a good time.

Simple but effective combat reminiscent of 3D Zelda, colourful and varied world design, the RPG elements always give the player something to do...

…But what tasks the player is given to do aren’t always interesting. There is little point putting down roots and taking ownership of a project or home as the level based structure always pushes you forward and the docile enemy mobs don’t threaten your stuff.

Final Verdict:
GOOD
Portal Knights is not completely unpalatable or unsavable, it just also isn’t super elegant in the same way the heaviest hitters of the crafting genre marry together all of their systems. Revisions or sequels that totally rebalance this could create something special, but for now, Portal Knights is just kind of there.
A copy of this game was provided by Developer/Publisher/Distributor/PR Agency for review purposes. Click here to know more about our Reviews Policy.