Konami’s football flagship is a fairly pretty spectacle on consoles but bombs miserably on PC.

For all the controversies that Konami has faced this year, Pro Evolution Soccer is actually one the publisher’s most stable franchises. Pro Evolution Soccer or PES is available in 62 countries worldwide and its overall sales figures since the first game’s debut in 2001 make it one of the best-selling franchises in all of gaming. Not bad for a series that’s long considered to be living in the shadow of EA Sports’ FIFA games.

Pro Evolution Soccer 2014, released in September 2013, was the year the series began its most significant shift in visuals yet. It began to use a modified version of Kojima Productions’ FOX Engine and Havok physics. Metal Gear Solid 5: Ground Zeroes would debut roughly six months later and better showcase the engine’s potential on current gen platforms like the Xbox One and PS4. Sure enough, PES 2015 showcased the series’ improvement in terms of better skin shaders, more realistic emotion on display from players on the field, better animations and more believable ball and player collision physics.

We now come to Pro Evolution Soccer 2016 which is available on the PS4, Xbox One and PC along with Xbox 360 and PS3. It seems that this year’s iteration has a lot more to live up to, especially after Kojima Productions’ upped its efforts with the FOX Engine following the release of Metal Gear Solid 5: The Phantom Pain. So what kind of visual improvements can players look forward to in PES 2016?

Head to head comparison between PS4, Xbox One and PC versions of PES 2016. Please select 1080p and 60fps for the best possible video playback quality.

First, it’s important to point out the rather strange resolutions on the Xbox One compared to PS4. While the PS4 runs at 1920×1080 resolution, the Xbox One’s resolution is rendered at 1360×1080. Why the odd choice, especially when FIFA 16 can maintain a full HD native resolution? Maybe the FOX Engine just scales better on the PS4, though even Metal Gear Solid 5: The Phantom Pain’s resolution was 1600×900 on the Xbox One. Perhaps Konami is just better at optimizing the FOX Engine for PS4 in this particular instance but that’s just our guess.

Still, the decision for a sub-1080p resolution in the Xbox One version is interesting. Many other games like The Witcher 3: Wild Hunt and Call of Duty Advanced Warfare employed dynamic resolutions. The choice to stick with 1360×1080 feels somewhat better in this case, especially since the engine isn’t switching pixels depending on available GPU resources. It’s also much better than the 720p resolution we saw with PES 2015 last year or in the majority of the Xbox One’s launch titles. Microsoft has surely come a long way with its console’s SDK.

Thankfully, as Metal Gear Solid 5: The Phantom Pain’s performance exemplified (and that was no small game by any means), Pro Evolution Soccer 2016’s performance across both platforms is rock solid. Performance can be considered similar to FIFA with a locked 60 frames per second and V-Sync employed. There are some frame drops during a match’s opening ceremony or when camera angles are switched but unlike the replays and celebrations in FIFA 16 which run at 30 FPS, PES 2016 runs at 60 FPS.

The PS4 version sports better texture filtering, as noticed on player socks and attire. Overall, character models are excellent and identical across both the PS4 and Xbox One. There’s plenty of depth of field especially in replays which only adds to the sense of adrenaline and certainly helps PES stand on its own. But Konami’s football title stands apart from FIFA 16 with fantastic animations and physics; to some extent, even the character models look better. While the presentation may feel a bit flat compared to FIFA 16, the action on field looks better. There are no jerky animations and player movement doesn’t seem stiff or robotic at all. Players with ball possession look and run realistically though we did note some slight delays when the ball connected with a player’s shoe. In some ways, the latter animation comes across as a more natural reaction to the first. If you’re expecting great looking crowds though, we’ve got some bad news – the crowds in PES 2016 look terrible compared to those in FIFA 16.

Head to head screenshot comparison between PS4 followed by Xbox One version of PES 16. 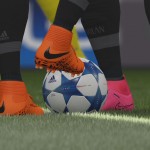 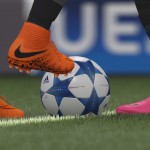 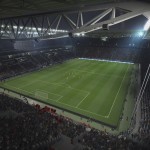 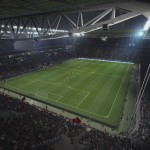 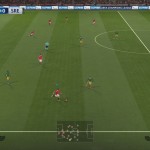 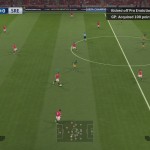 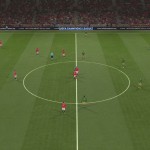 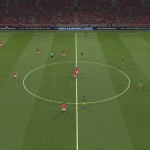 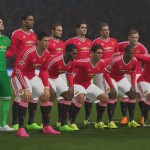 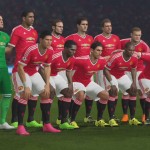 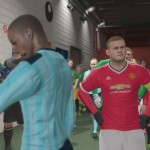 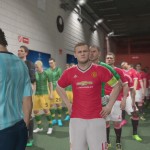 Head to head screenshot comparison between PS4 followed by PC version of PES 2016. 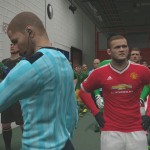 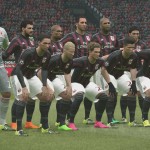 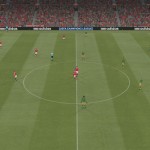 As noted with analysis on The Phantom Pain, the FOX Engine uses a custom, hardware-based anti-aliasing solution that’s closer to custom FXAA. Since PES 2016 isn’t as demanding as Metal Gear Solid 5: The Phantom Pain, the custom AA works so much better here. Weather effects like rain and day/night matches have been included though fans won’t find much different from last year’s iteration. The FOX Engine’s lighting tech looks stunning during night matches and is once again the star of the show.

Now think about how good PES 2016 looks on PS4 and Xbox One, and compare it to how Metal Gear Solid 5: The Phantom Pain looked on consoles while translating great to PC. Surely Konami kept the same level of quality in the PC version of PES 2016?

Unfortunately, no. The graphics in PES 2016 on the PC are simply disappointing, coming across as more of an updated port from the previous generation rather than an entity separate from the PS4 and Xbox One.

Texture filtering is vastly inferior to both console versions. Shader quality on character models seems to have dropped significantly. The lighting is flat and the crowds look akin to PS2-level paintings than 3D polygons. What’s worse is that there are only three graphical presets to choose from – low, medium and high – and nothing more. Sure it’s priced the same as previous gen versions but is it really worth it in this case?

Our hardware consisted of an Intel Core i7-5960X with 16 GB of RAM and a Radeon R290 2x GPU. There weren’t any performance issues with PES 2016 per say but it’s just a huge letdown when you consider the tons of different graphical options that The Phantom Pain shipped with.

In the end, it’s easy to recommend the PS4 version of PES 2016 over Xbox One though the improvements seen in the latter just go to show you how scalable the console can be. As such, the overall quality of the Xbox One version is still miles ahead of the PC version. The biggest irony is that the PC version using the exact same engine as Metal Gear Solid 5: The Phantom Pain and yet these are the results. Check out the PC version only if you have no other choice.