As it turns out, social deception and desperate survival mix rather well together.

Project Winter first launched for PC back in early 2019, and within the small but dedicated fanbase it has garnered since then, it’s built up a solid reputation as a fun social deception game that mixes elements of that genre with survival mechanics rather well. Now, in an industry where Among Us’ massive popularity has shot the social deception genre full of renewed life, Project Winter comes to Xbox consoles, hoping to rake in even more players. And while the very nature of the game might mean that it probably won’t end up having as much mass appeal as its developers might want, there’s little doubt that those who can find their feet here will be satisfied with what’s on offer.

Every match in Project Winter sees a group of eight players stuck on top of a snow-capped mountain, and while the bulk of that group is made up of Survivors who’re trying to call for help and get off the mountain alive, there are also a few Traitors in the group whose sole purpose is to sabotage those attempts and ensure that nobody leaves with their lives intact. The setup is classic social deception affair, but what sets Project Winter apart is its survival elements.

"While the very nature of the game might mean that it probably won’t end up having as much mass appeal as its developers might want, there’s little doubt that those who can find their feet here will be satisfied with what’s on offer."

Seeing as you’re trapped on top of a frigid mountain, it makes sense that there’s no shortage of ways to get killed. There is, of course, the ever-present threat of the unknown traitors within your group who might corner you and take you out when no one else is around, whether that’s through deviously placed traps or through sheer brute force and multiple swings of an axe. On top of that, however, you also constantly have to keep an eye on your hunger and your warmth, and if ever one of those meters hits zero, you begin losing health. The mountaintop is also home to wildlife, from wolves to bears, which means exploring is also never quite safe- though getting a healthy chunk of meat off a dead animal might just prove to be the difference between life and death when you’re running low on food.

Global events also sweep the map every now and then, and you never want to get caught outside when a blizzard comes rolling in, which not only makes that warmth meter deplete that much faster, but also reduces visibility, making it more difficult to find your way around. A central hut in the map serves as your hub location where you can return to warmth (unless you have the resources to build a fire) and to cook food, while the tools and weapons and other items that you need to craft to complete objectives can also only be crafted at a crafting table in the hut.

Clearly, there’s a lot going on in Project Winter, which means the game does stave off the feeling of monotony across matches very well (up to a certain point, at the very least). Having to contend with surviving against the elements, properly playing the role of either a survivor or a traitor, collecting resources to help craft new tools and weapons, and constantly managing your hunger and warmth meters means that you’re constantly juggling a lot of balls in the air at any given time. That level of depth is, as you might guess, a big plus. While those looking for casual fun – for Among Us wrapped in a different skin – might be put off, players who’re looking to sink their teeth into something meatier will find plenty to keep them busy. 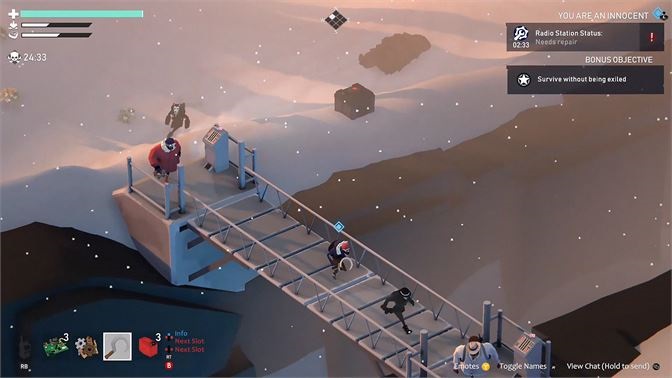 "While those looking for casual fun – for Among Us wrapped in a different skin – might be put off, players who’re looking to sink their teeth into something meatier will find plenty to keep them busy."

That can also be a bit of a double-edged sword though. Having to balance your attention across all of those attentions is a key part of the experience, but it also means that you can feel a bit too overwhelmed at times, especially in the early hours when you’re still getting to grips with all the systems and mechanics. Perhaps having separate modes that put their focus on specific parts of the experience is something that the developers should consider, not only to add more variety to the experience, but also so that those who want to, say, focus on the social deception more than the survival elements, have the option to do that.

Another area where Project Winter needs work is the balancing, in that the game tends to favour Traitors very heavily. From easier communication to easier (and almost instant) to powerful weapons, from having much more efficient means of traversing the map to just having a lot more ways to get hands on crucial resources, Traitors seem to almost have an unfair advantage, to the extent where matches where Survivors actually manage to win the match by successfully completing their objectives, calling for help, and then escaping from the map before the Traitors have killed every single one of them are extremely rare.

I also wonder how much longevity Project Winter is going to have in its current state. Things such as global events and unique roles within groups do bring in some welcome dynamism, but the game doesn’t see a lot of changes in other areas such as the environments you’re traversing, while your objectives also generally tend to be similar in nature to each other (especially when you’re playing as a Survivor), which means playing Project Winter for a sustained period of time doesn’t seem like such an attractive prospect right now. Hopefully, the developers will keep adding to the game to inject more variety in the experience in order to encourage players to stick around. 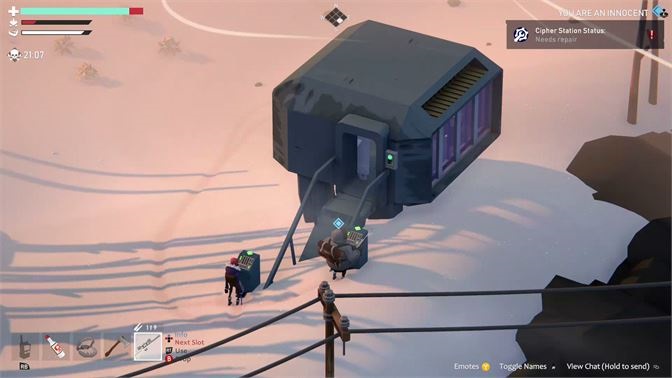 "Traitors seem to almost have an unfair advantage, to the extent where matches where Survivors actually manage to win the match by successfully completing their objectives, calling for help, and then escaping from the map before the Traitors have killed every single one of them are extremely rare."

Meanwhile, where the visuals and performance are concerned, there’s little to complain about here. Project Winter has a very simplistic look, but it suits the game and its aesthetic well, and in my time with the game, I haven’t run into any performance issues either. One small console-specific issue that is worth mentioning is how imprecise and sluggish aiming with projectile weapons feels, which can be a pretty major knock against you if you find yourself playing against PC players (which happens often, thanks to full cross-play support). Thankfully though, the game doesn’t suffer from any connectivity issues, which, of course, is crucial in an experience such as this one.

Project Winter is, on the whole, a solid, enjoyable multiplayer experience. Its blend of survival and social deception is executed largely well, and though its various mechanics can often pile on top of each other to overwhelm the player, when all of them are working in harmony, it’s hard not to have fun. Here’s hoping Other Ocean keep supporting the game and building upon it, because the core idea here is one that can flourish with a little more work.

Central premise serves as a solid framework for social deception shenanigans; Survival elements and social deception mechanics tend to mix well most of the time; Lots of depth on offer; Looks good and runs well.

Juggling all the mechanics can be a bit overwhelming at times; Balancing issues; Needs a bit more variety to ensure players keep coming back.

Final Verdict:
GOOD
Project Winter is a solid, enjoyable multiplayer experience. Its blend of survival and social deception is executed largely well, and though its various mechanics can often pile on top of each other to overwhelm the player, when all of them are working in harmony, it's hard not to have fun.
A copy of this game was provided by Developer/Publisher/Distributor/PR Agency for review purposes. Click here to know more about our Reviews Policy.