Prototype takes place in New York city where the entire population has been infected with an unknown virus. The player takes up the role of Alex Mercer who too is been infected with the virus. The story shows how Alex is found to be dead at first, raises from his death in to human being which is being infected with virus. At first Alex is totally confused with himself, he seems to have lost his memory and wants to find out who did this to him. The entire plot surrounds over the fact of Alex’s orgins and how his former company Gentek is involved in the virus that as devasted New York city. The game starts off with Alex mindlessly killing the people and the government officials involved in fighting against the virus infected human beings. Later on he’s able to find his sister Dana Mercer. She helps him to find that how his previous employers GENTEK are involved in this. Later in the game he makes contact with his ex-girlfriend Karen Parker who then helps her to find genetic materials so that she could examine them which leads GENTEK to believe that Karen is involved with Alex which throws a number of missions where the player has to protect the safe house in which Karen is residing. In later parts of the game, Alex is infected with cancer due to Captain Cross injecting something in his back. Alex’s power than becomes less effective however he can use them as normally as he did before. Karen than gives Alex the address of Dr. Ragland who is the only one who can sure Alex of his disease. What ensues further is how Elizabeth Greene, with whom Alex met in the earlier part of the plot, is forced to change her genetic code. After realizing his mysterious pasts Alex Mercer vows for revenge for the people who are responsible for his current state. The plot really does suck you in and thats one of the reasons why gamer could easily spend about 10-12 hours non stop with Prototype. 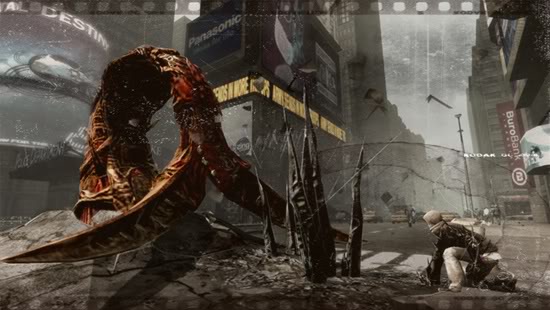 Alex Mercner has a great arsenal of moves. In the starting the game will show how you can use them and most of the attacks are really deadly. Alex can turn his hands in to a pair of slicers, this is pretty usefufl against fighting off The Hunters which are found somehwere in the middle of the plot. Alex can also turn one of his hands in to a shield, however after taking enough hits from rocket launchers the Shield degenerates. The most convinicing move that Alex can perform is the way he can dig his hands right down in the ground and blow off any enemy. Also as the player progresses through the game, Alex will be able to transform his hands in to shape similar to pair of hammers. This specially useful for taking down armor tanks later in a section where Alex has to save a hive building. Alex’s most powerful and awesome moves are the devastators. In one of the scenes Alex is able to attack similar to the whipfist that sends dozens of razor-sharp tendrils shooting in every direction from Alex’s body to absorb or destroy all nearby foes, the second is a variation of the ground-spike attack, in which Alex shoves his biomass into the ground, causing many large spikes to erupt from the ground in an expanding circle around him, sending foes flying. 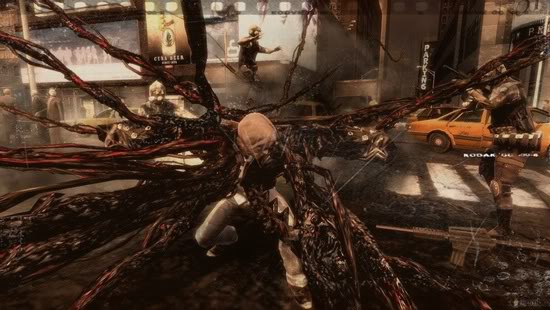 Another really cool move that Alex can perform is that he can mutate his hands to reach abt 50 feet in the air, grabbling near by cars , tanks and even helicopters. He can use this to cause terrible destruction along the streets of New York and can take out loads of enemies together. Alex will be able to grab about any object like cars, generators which is useful when the military calls the strike team. Alex will also be able to transform himself into commanding officers giving him access to restricted areas. But first Alex would have to consume them. Consuming is a key element in the gameplay where after consuming key people the player is able to see the memories and experiences that the consumed one has gone through. This gives Alex enough hints about whats going to happen next. Alex will also be able to run over buildings, fly over the sky, for a limited time though. Besides the moves there is also a stealth meter where an indicator is given to represent whether the player is hidden from the military or not. There are many vehicle seesions in the game. You will be piloting armor tanks and helicopters in Prototype. Handling is pretty neat for most part. But the aiming and shooting system is pretty cumbersome. I had many moments in my gameplay where i was not able to shoot at the required target. Camera in such cases was pretty bad which meant that the screen did not snap back when I changed my target. But such issues did not held me back for the awesome gameplay fun that i had with Prototype. There is also an upgrade system where the player can upgrade Alex’s combat skills. The player can unlock those by gaining EP , also called as Evolution points. Also in the start menu you will find a tab called as WEB where all the memories of the people he consumed and including his are stored. This gives the player a great insight on the life of the protagonist.

The world of Prototype is big and open. Players can take whetever route they want, to reach their objectives. There are side missions where the player can enhance the gameplay value of the game. The visuals are pretty good for an open ended world game. But the most important thing is that the frame rate is very stable indeed. There will be more than one occasion where the player will be facing hunderds of people and enemies around Alex but the developers have done a great job of the visuals. You will be blowing a lot of stuff in the game and the explosions looks spectucular. The game is gory and bloody but the players need not take the gory approach to wrap up the game.

Sound is very good in the game. Voice acting is superb and the script is awesome. It really keeps the player involved about whats wrong with Alex Mercner. You will be scaling huge towers and climbing roof tops. One of the thing i am pretty disappointed is the sense of scale. The world is big but it doesnt have a sense of scale to it. Prototype is not a game without faults. But the number of faults just get over weighed by awesome gameplay to be found in the game. If you rush through you should finish the game in about 10 hours. But if you are of the exploring type than Prototype is one game that will ensure that you dont leave your gaming couch for some time.

Vehicle combat controls feel awkward, Some bland animations, Camera sometimes is not able to keep up with the action

Final Verdict:
EDITOR’S CHOICE
Prototype is one very good reason to be an anti hero this summer.
A copy of this game was provided by Developer/Publisher/Distributor/PR Agency for review purposes. Click here to know more about our Reviews Policy.