PS4 being worked on by Sony since August 2010 – Report 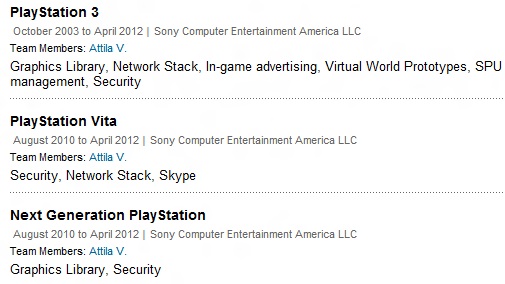 In what could be a proper confirmation that the successor to the PS3 is indeed in development, a Linkedin CV of an ex-SCEA R&D director has outed some vital information that won’t please Sony. It’s funny that the CV still has Next Generation PlayStation listed there, or maybe since he left Sony, he can do whatever he wants.

According to his CV:  “In 1998 I started as the first engineer in the Playstation US R&D. During the past years, I worked on graphics ( COLLADA, PSGL ) and a lot of network related technologies ( advertising, telemetry, PVRs ) for the Playstation2/3, PSP and Next Generation platforms.

“Platform security is occupying most of my time at the moment… I am comfortable with both low- and high-level coding for experimentations and product development, but I do a fair amount of setting directions and managing partnerships as well.”

He apparently worked on the graphics library and security of the next generation PlayStation from August 2010 to April 2012.