The casual gaming scene is one of those phenomena that has escalated quickly over the past few years, and I’ll admit that I fail to understand where the enjoyment lies in the whole thing. Solitaire is about as casual a game as I’ll ever play, and I mainly play that one because it was free. When I first heard about Puzzle Quest: Challenge of the Warlords attempting to merge the match three gameplay of bejewelled with more hardcore RPG elements, I laughed heartily at the absurdity of the idea. That was until I played it. Six months later and I’m still playing it regularly, but I must stop now for one reason and one reason only. Puzzle Quest 2 has just been released and it’s just as fun and just as addictive as the first. Having had a lapse in popularity with the mediocre Puzzle Quest: Galactrix, Infinite Interactive return to give fans the true sequel they have been waiting for. I have also had the unusual pleasure of being able to try both the version for Xbox Live Arcade and DS, so expect comparisons throughout the review.

The main bulk of the game comes in the single-player quest mode. The adventure begins with you showing up in the town of Verloren for some reason. After defending it from a surprise goblin attack you begin searching for the cause of said attack. Don’t think about the story too much, it’s so paper thin that it’ll probably rip if you even look at it funny. It’s a problem I found with the first Puzzle Quest which the sequel unfortunately retains. The plot, characters and world are all very generic. Goblins are green, barbarians wear loincloths, wizards have pointy hats… You get the picture. It’s a shame it’s so by the book, as a little creativity would’ve gone a long way. It’s not all bad as the world does have a colourful and fun style to it. The way you explore the game world is also leagues ahead of PQ1. Whereas in the original game you just had a world map and clicked to venture to the ice caves, you now get to actually quest within the ice caves. It’s much more free-roaming and gives the game a real sense of adventure that its predecessor lacked. 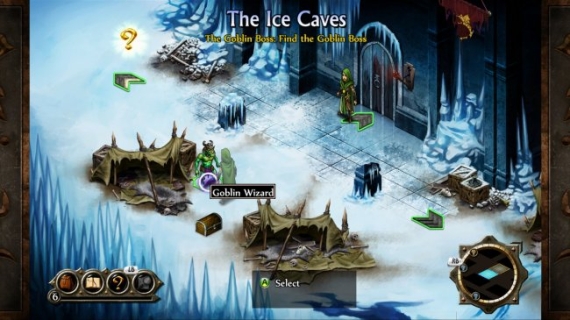 Even though the story might not be up to scratch, this isn’t a book we’re reading. It’s a game and the gameplay is definitely where it’s at. The core mechanics of PQ2 follow in the vein of the first game. You match three gems horizontally or vertically, with each type of gem affecting the game in different ways. Skulls drain your opponents health points and different coloured gems add to the corresponding colour of mana in your reserves. You can use this mana to cast your spells (see the RPG parts creeping in now?) that also have their own uses, whether it be affecting gems on the boards, buffing defence or just dealing a few more points of damage. Changes in the original come in the removal of the experience and gold gems. They’ve been replaced with a new colour of mana and gauntlets that provide your character with action points. These can be used to utilize pieces of equipment in each hand. Whether it be a health restoring potion, a sword for damage, or a buckler to raise your defence. It’s a very versatile system that really adds depth to the game.

So there we have the core mechanics of Puzzle Quest 2 in a nutshell. They may not sound like much but they really grab a hold of you in unexpected ways. It’s a simple and addictive game mechanic with a surprising amount of depth. There are tonnes of different spells and pieces of equipment that allow for a plethora of different tactics and play styles. It’s a highly customizable experience to say the least. It offers the game a surprising amount of variety, which is also compounded by the mini-games. These come into play for most actions, from putting out a fire, to picking a lock on a door. They always revolve around the match three approach and, even though they aren’t hugely different to the main game, they help keep the experience fresh throughout. To top it all off the gameplay experience is completed by some pretty intuitive controls on the whole. The DS obviously wins out this one as using the stylus to flick the gems around just makes a lot of sense, that said the controls on Xbox are very good as well and make the game a very smooth ride indeed.

Though the DS may have the edge in terms of controls, the 360 conversion definitely wins out in terms of multiplayer modes. Both ports offer a one on one match up with each person’s respective hero, but the Xbox version offers play both locally and online, whilst on the DS this mode can only be played via wi-fi. On the Xbox players are also given another versus mode missing in the DS version: the tournament mode. Each player selects four monsters from the game’s quest mode, each one more powerful than the last. You then battle each in turn as normal until only one monster remains. It’s a nice addition, even if the match-ups can take a very long time to finish. Despite the lack of modes on DS, the versus modes are fun distraction, but it’s clear that the main appeal is in the single-player. 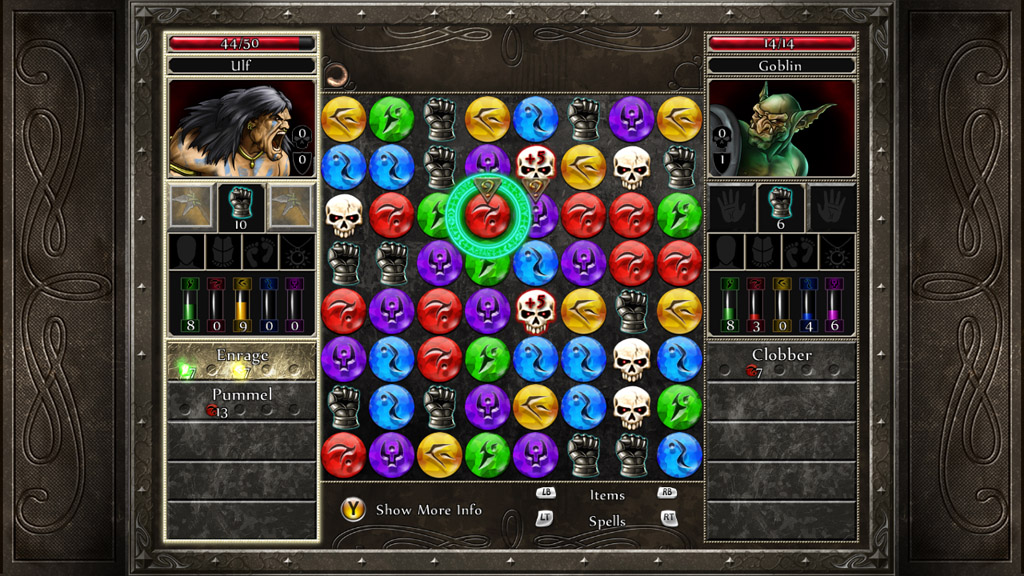 Visuals aren’t exactly paramount to the enjoyment of a puzzle title, but the graphics are surprisingly good on the whole… For the Xbox version at least. Another point definitely goes to the 360 version for it’s graphics. The sprites are smooth, colourful and full of life. By comparison I found the DS version to have quite blurry visuals that weren’t very inspiring at all. It’s not a big deal either way, as the visuals aren’t bad enough to ruin the experience, but take note that the visuals on the 360 are much better.

The aural side of the presentation spectrum is one of the weaker aspects of Puzzle Quest 2. Characters and monsters have little voice clips which are repetitive and quite annoying, but these aren’t present on the DS version. The Background music isn’t necessarily bad, but it’s very generic and mediocre at best, especially in comparison to the rather catchy melodies of PQ1. The only thing that stops this being a game best played on mute are the snappy sound effects. They’re oddly satisfying and it makes matching gems all the more enjoyable. Whilst the sound doesn’t break the deal, it certainly wouldn’t be missed if it were gone. 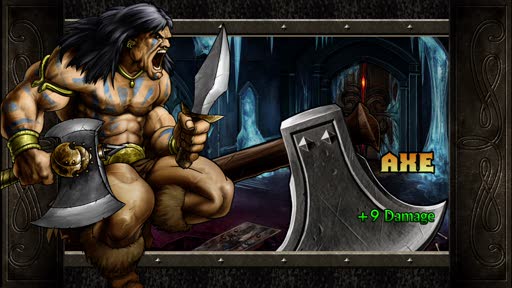 It makes sense being able to use your weapons now, what with being an axe wielding barbarian and all…

Should you decide to purchase Puzzle Quest 2 it’s worth ensuring that you have the next few weekends cleared of other pursuits. This game will take you ages to finish, and you’re not going to want to stop until it’s all done. The main quest itself is a real beast, and the amount of side-quests make 100% completion little more than a fantasy. One thing that is also highly commendable is just how different each character class is. The different approaches required for each will definitely warrant multiple play-throughs. Once you’re done with all this you can always fall back on the versus modes, they might not hold your attention for long, but it’s nice having them around anyway. The only aspect of lifespan I found to be a let down were the achievements for 360. The titles have a certain wit, playing off of gamer culture, but the actual achievements range from boring quest completion affairs to utterly ridiculous ones that are just not very fun to go for. Despite this it’s unlikely you’ll be done with Puzzle Quest 2 any time soon.

How they made PQ2 more addictive than the first I’ll never know, but they have. The merge of hardcore and casual game mechanics give the game a wide appeal that I would recommend everyone try, especially when you consider that the demo is free on Xbox Live. In short: Get it. As to which version I would recommend, I must say the Xbox conversion won me over in the end. The touch controls and portability of the DS give it a head start, but the smoother graphics, extra multiplayer modes and cheaper price make the XBLA version my favourite of the two and the one I would recommend you get. Don’t hesitate to try it, you will be pleasantly surprised.

This game was reviewed on the Xbox 360 and Nintendo DS.

Audio is uninspired, Game world is quite generic, Might eat up a bit too much of your time...

Final Verdict:
SUPERB
The worlds of casual and hardcore gaming collide to bring you Puzzle Quest 2: A game so enjoyable and addictive I almost felt guilty playing it
A copy of this game was provided by Developer/Publisher/Distributor/PR Agency for review purposes. Click here to know more about our Reviews Policy.