Posted By Alex Jackson | On 02nd, May. 2017 Under Article, Previews | Follow This Author @teh_jackson

As one of the many who fell in love with DOOM when it violently struck the gaming landscape in 2016, I hoped and prayed it would signal something of a rebirth to the stagnant shooter genre. After way too many ‘me too’ pretenders to the Call of Duty crown, it was a refreshingly retro and kinetic shooter that still holds the bar for my expectations of the genre.

Yet, DOOM wasn’t the only game making waves within shooters last year. MOBA inspired Overwatch set the world on fire itself with a diverse cast of quirky gunslingers and inspired map design all its own. The absorbing nature of the meta game captivated players the world over, perhaps to be expected by Blizzard, who tend to make the kind of games that players spend decades on. 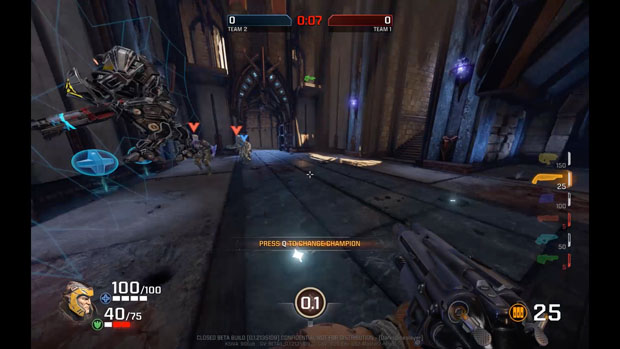 "The brutal, over the top and riotous combat brought to life first in DOOM takes centre stage,"

Whether intentionally following in the footsteps of the character shooter made famous by Overwatch or not, Bethesda hopes to grab back your attention with Quake Champions. Presented for your consideration as a new age classic multiplayer shooter that only the PC could handle, the game takes the shooting and speedy movement from DOOM and folds in select ideas from Overwatch to try to bring some extra depth to the game, such as a selection of playable characters with abilities to change the tide of battle.

The brutal, over the top and riotous combat brought to life first in DOOM takes centre stage, borrowing many of the concepts that game leveraged to its credit. You are expected to move at the speed of a low flying aircraft as you would expect from an arena shooter, ignoring mechanics that would slow down the shooting such as reloading or melee. Players are encouraged to stay on the move to avoid getting pinned down and nailed by a gauss cannon, or in range of an unfriendly shotgun. There is no regenerating health or free ammo either, demanding that players stay on the lookout not only for enemies that will end your life, but those sweet, sweet pickups to prolong it.

The armoury in Quake Champions has enough firepower behind it to recall the excellent weapons in DOOM. Basic staples like the machine gun, shotgun and rocket launcher work as expected, but the heavy hitters like the Nailgun, Lightning gun and Railgun bring that wonderful sci-fi feel and require a lot of skill to make the most of. As a unique take on a sniper, the Railgun rewards those who have the coordination to connect a shot with the opponent rolling around at the speed of sound, but with a huge cool down between shots makes you vulnerable if you whiff. 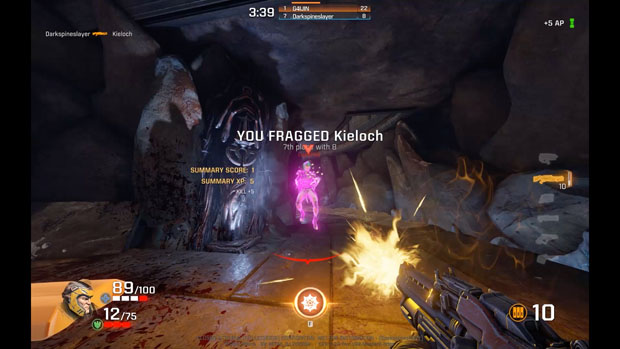 "Within a few games you’ll have got the layout of each map down to a T and know where all the chokepoints and weapons can be found to give yourself an edge."

The few arenas I had the chance to play in the beta were multilayered playgrounds that brought out the best of the speedy gameplay, seeing players bouncing around interconnected hallways and up jump pads like pinballs. The perfect size to never feel crowded, yet making sure you didn’t go too long without a shootout. One had many segmented rooms of many levels to chase foes downwards, but only a handful of avenues to get back up to health and ammo. The other mixed claustrophobic close quarters undergrounds with plenty of walls to put between yourself in a firefight with an above ground open courtyard that you would always seem to loop back to.

These environments were brought to life with great detail too, with towering gothic castle architecture and abstract horrors such as a giant eyeball to landmark various areas within the maps. Within a few games you’ll have got the layout of each map down to a T and know where all the chokepoints and weapons can be found to give yourself an edge. The art direction is pleasing to the eye, recalling the look of the classics while avoiding treading too close to DOOM territory and its depiction of Hell. Pickups hover as holograms just above the floor, making them immediately identifiable even at speed, which is hugely important for maintaining the kinetic action.

I’ve just gushed about the gameplay and the different facets within for a while, and while I’ve fallen very much in love with the gameplay of Quake Champions, it’s not without concerns. Where the game begins to trip is not with the elements borrowed from id Software’s best, but rather what it decides to bring from Overwatch. 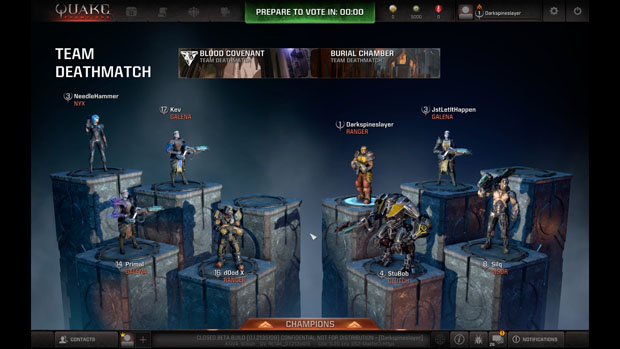 "The mechanics currently behind unlocking and using heroes other than the default Ranger seem suspect at best."

The execution of having different heroes is much the same as Overwatch, with each of the characters balanced to fill a different niche. I was only able to spend time with the default Ranger class, who was rounded and well suited to a frontal assault without particularly specializing in anything. Passive skills give heroes a specific boost, and active abilities offer a unique twist to the heroes play style, such as the Ranger’s Dire Orb. A grenade that players can toss towards walls, or throw and teleport to on a whim, perhaps reappearing within a foe and shredding him from the inside out.

The mechanics currently behind unlocking and using heroes other than the default Ranger seem suspect at best, which is why I didn’t spend any time with them. You may use in game currency to rent individual characters for a single day, but a permanent unlock seems to require premium currency obtained through microtransactions. I simply never accumulated the credit for a rental.

When asked for comment, Bethesda informed us that this isn’t necessarily representative of the final game and the specifics are still being tested. I do appreciate that the rental feature does offer players an avenue to test drive the heroes and see who they enjoy most, but in the current form I feel it undermines the point of being a hero shooter to start with, borders toward pay to win and is easily the major complaint I had with my experience. 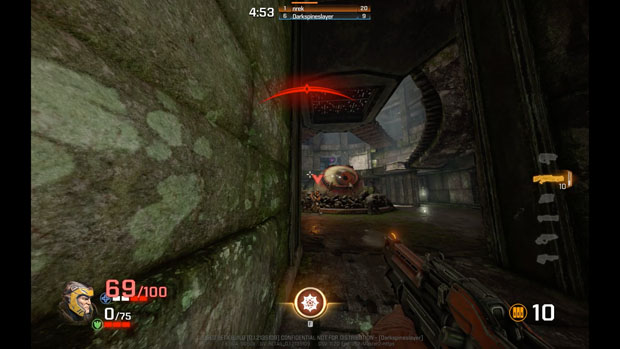 "I have no problem giving Quake Champions a hearty recommendation based completely off of the gameplay as it is now."

Finally, the loot box system seems to have been lifted from Overwatch almost completely, with players able to purchase different levels of them, or earn the lower tiers from playing. They unlock an assortment of different skins, nameplates and paraphernalia, but with no promise that you’ll be able to use it without purchasing the characters tied to it first. Take the inclusion of this system as you will, but if you found it upsetting in Overwatch, you’ll likely not enjoy it here either.

While still regarding iffy monetization that could very easily completely change before release, I have no problem giving Quake Champions a hearty recommendation based completely off of the gameplay as it is now. The runaway action and strong shooting is addicting to play and complimented with nice art and level design, and at the end of it, that core gameplay has me as a fan, waiting with bated breath to see what awaits us in the final game.