Is the world out of ideas? Hold on a second. Let me rephrase that and say; is the video games industry out of ideas and innovations? I highly doubt that the answer is yes. But after playing through Quantum Theory it makes me wonder why can’t people innovate and come up with fresh ideas. Let me be honest, when I saw the game about a year ago I was really excited since a game based on Gears of War style suits me, but I am extremely disappointed that Quantum Theory is really a very bad rip off of Epic’s Gears of War franchise. 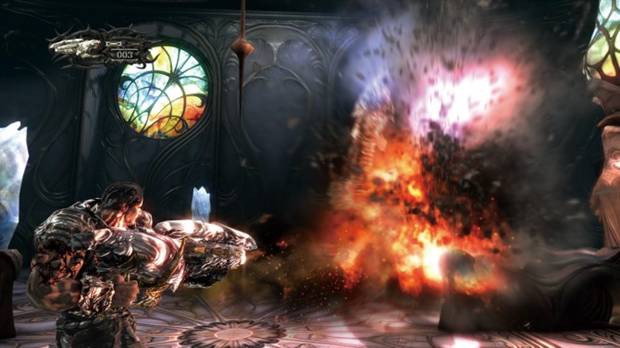 This looks mind blowing, but trust me it is not.

Let’s talk about the game’s story first. The game begins with a future flash back with the main protagonist Syd and his ultra acrobatic female fatale Filena are fighting off in a mysterious living tower. Filena loses in between (I won’t say the reason, since that will spoil for the players who are going to play this game) and Syd moves on and he latches on one of the deformable environments. The plot then diverts back to the present with Syd and a whole lot of fat looking soldiers fighting against the main enemies of the game, the Diablosis. Throughout the game your mission is that you have to take out that “living tower” since its taking too many lives and converting human beings in to Diablosis. No logical explanation is given as to how the hell that tower came in to existence, the player is simply thrown in to game and expected to shoot around things. In all, the story absolutely goes nowhere.

The game play just like the story, does not innovates at all. It’s a well known fact that Quantum Theory borrows various game play mechanics with Gears of War and one of them is the cover mechanics. The cover system in Gears of War was revolutionary but the same system in Quantum Theory is laughable. You can slide in to cover just like Gears, but you can’t change from cover to cover, which I think was a brilliant feature. Sometimes the cover system would go for a toss and Syd would not go in to cover fast enough. Next up is the shooting. There is actually nothing to speak about it since it’s basically the same thing that we have seen for the last two years or so. Pop and shoot seems to be the mantra here as well, however having said that some shooting sections are highly enjoyable, specially one area in the game where you are inside a dark area and the Diablosis would attack you from anywhere. Unfortunately enjoyable sections like these are few and far away which meant that the game was extremely repetitive and unevenly paced. 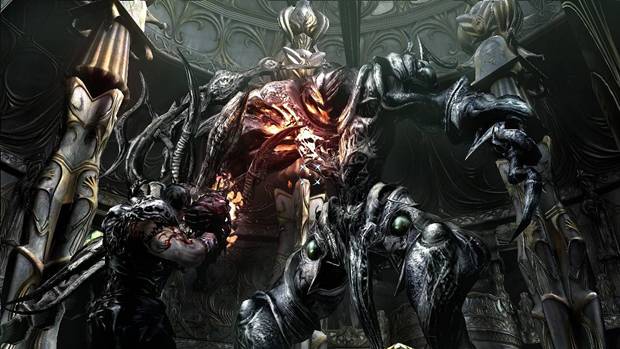 The Diablosis are more interesting than the really bland hero

One of the few good points about Quantum Theory is the bad guys. It’s actually a bit surprising that I found Syd to be lame as compared to the Diablosis. You will fight off various types of Diablosis, some take less shots to take them out, some a few more. Again their resemblance with the Locusts can’t be ignored, but at least they were much more interesting then the boring protagonist. There are tons of weapons to be found in the game and they are huge and massive. But it’s really sad to say that none of them are satisfying. Whenever I used to pick up a gun in the game, I felt like “wow, this is gonna be crazy.” In the end it was a mess! One of the brighter points and the only thing that sets it apart from Gears of War is the double character approach. Syd can use Filena as a projectile and throw her towards the Diablosis for maximum damage. The two can also perform combo attacks when Syd initiates a melee attack which is followed by Filena doing double damage to your foes. Syd can also jump and cling onto deformable and moving environments. At first these elements are exciting but later on it just loses its importance as a major game play element.

The visuals are uninspiring and the artwork is discouraging. Some of the environments are good looking but most of the time you will be living your life inside that bland tower. Story elements are told via a number of impressive looking cut scenes. Voice acting is horrible; the music does not increase the adrenaline. All in all the three major elements of the game have been poorly developed.

Quantum Theory is great example of how Japanese games are trying to impress the Western audience. But simply borrowing ideas from a western game and implementing them in an under average fashion won’t work. Quantum Theory is not the game I was expecting it to be when I saw it all those months ago, the game is a disappointment.

Some sections of the game are enjoyable; variety of enemies to kill in the game, two character approach is interesting.

Final Verdict:
POOR
Quantum Theory tries to do too much, but in the end it is nothing but a below average, extremely mediocre shooter.
A copy of this game was provided by Developer/Publisher/Distributor/PR Agency for review purposes. Click here to know more about our Reviews Policy.