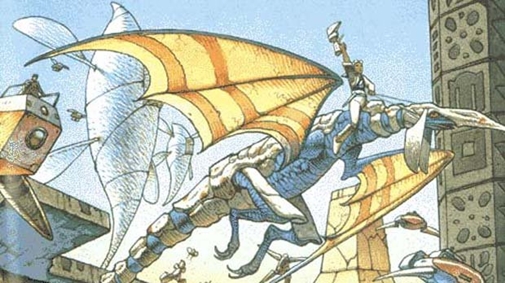 Comics are a big deal in France, sometime referred to there as ‘the 9th art’, and in French comics Moebius is about as big a deal as you can get. Sadly, Moebius (a.k.a Jean Giraud) passed away this weekend. His position in the history of the graphic novel is pretty much cemented, but Jean Giraud also held sway over the world of computer games…

Directly: He drew the cover art for 1995’s Fade to Black, worked as Character Designer on the adventure game Pilgrim: Faith as a Weapon and, alongside drawing the Japanese cover art for the first Panzer Dragoon, helped forge the visual identity of the entire Panzer Dragoon series.

Indirectly, it should not be underestimated how much of Moebius’ film work subtly permeated the world of computer games: He provided concept designs and story boards for Alien, Tron, The Fifth Element and The Abyss. It should also be noted that Ridley Scott and Hayo Miyazaki have also acknowledged Moebius’ influence – Ridley Scott surrounded himself with Moebius comics during Blade Runner‘s production and Myazaki admitted to directing Nausicaa of the Valley of the Wind under the influence of Moebius. Just think of any video games influenced by those films/artists and a little bit of Moebius might well have slipped in there too.

Big thanks to Luke Plunkett’s Kotaku article on Moebius