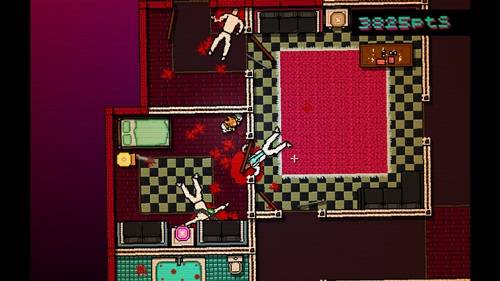 Hotline Miami 2, the sequel to the celebrated indie hit from last year, has a rape scene, and scenes of other sexual violence, to reinforce its message; as always, this has drawn the ire of critics, who flat out oppose its inclusion in the game.

PCGamer, when previewing the game, was attacking an unnamed female enemy on screen; the words ‘FINISH HER’ flashed on the screen, and so he proceeded to attack her, at which point the character undid his trousers and pinned her, the implication being that he was raping her.

Of course, even within the game, the rape is purely fictional, as it is a scene being shot on the sets of a movie (in fact, the director shouts ‘CUT’ shortly after the rape scene). However, that hasn’t stopped many from criticizing what is an uncharacteristically bold scene to include in a video game.

“I stroll up to finish the job. Instead, the control is taken from me by the game, and my character, the Pig Butcher, pins her down and drops his trousers,” said Cara Ellision, the previewer of the original build. “This is it, I think. I am feeling betrayal. I feel betrayed by something I love”.

Whereas no one condones rape, and I certainly do not, there is something to be said about the hypocrisy that lets rape scenes in other mediums, such as books, movies, and television (including the much celebrated Breaking Bad in the case of the latter, which includes repeated instances of spousal rape in its fifth season) slide for artistic integrity, but not video games. If critics are serious about video games growing as a legitimate medium of storytelling and an artform, then the same concessions need to be made to them that are made to other mediums as well.

The developers of Hotline Miami 2 remained unavailable for comment. We’ll keep you posted on how this story develops.