Ratchet and Clank make a convincing return on the PlayStation 4.

The current generation of consoles has been an unusual one. It’s not necessarily a step above the last one in terms of gameplay innovation and design but rather an era where developers are still perfecting what they learned during last gen. Furthermore, this generation of consoles has also been characterized by remasters and remakes in the form of some sloppy ones like Saints Row IV and some brilliant ones like The Last of Us and Gears of War Ultimate Edition. But Insomniac Games’ Ratchet and Clank is a different beast in its own right.

It isn’t exactly a remaster nor a remake but it is a fully fledged re-imagining based on the plot of the original while integrating modern gameplay mechanics that we have witnessed in previous games in the series. It also tightly integrates the plot from the upcoming animated movie and should not be confused with 2002’s Ratchet and Clank for the PlayStation 2.

"The game features a variety of locations, each of them dazzling with intricate details and amazing lighting effects that are a testament to the PlayStation 4’s graphical prowess."

Ratchet and Clank games have always featured sci-fi visuals that somewhat rival those to what we see in a movie developed by the likes of Pixar. The moment you start playing the game, you can’t help but wonder how close this title’s visual quality comes close to modern animated flims. The game features over 60 minutes of in-engine cutscenes and around 20 minutes of footage from the movie which have been meticulously crafted to capture the essence of the long running series.

The game features a variety of locations, each of them dazzling with intricate details and amazing lighting effects that are a testament to the PlayStation 4’s graphical prowess. Right from the individual fur strands on our favorite Lombax’s body to the metallic sheen on Clank, Insomniac Games have literally poured their heart and soul into what is mostly a game developed on a low budget compared to other games in the series. The re-imagining is by far one of the best looking games on the PlayStation 4. It is not an Uncharted 4 and is certainly no match for The Order: 1886, but the graphics remain true to the series’ roots.

If Insomniac Games have left no stone unturned in the graphics department, they have also made sure that this is a Ratchet and Clank title in gameplay as well. As I mentioned above, the game features several gameplay mechanics that have been utilized in the more recent entries in the series. Several RPG mechanics such as health and weapon upgrades return in the game. Players will be able to use raritanium to not only upgrade weapons but also Holocards. These cards can be collected during the game’s playthrough and they are different for different weapons and planets. They are not used to unlock weapons in the game but they can affect the raritanium and bolt drop rates, improving Ratchet’s wrench strength and a host of other things. "You will also be able to play as Clank in the game and although these sections are short and sweet, they give the player a break from the heavy action sequences when Ratchet is involved."

The weapon upgrade system is largely similar to previous entries and each of them can be upgraded to improve their rate of fire, bonus bolts, the area of effect, impact of damage and so and so forth. You can also use this upgrade system to unlock the rate at which you can find Holocards. Overall, the system will feel largely similar to veterans of the series and it goes to show that developers don’t necessarily need to fix something when it’s not broken.

And it won’t be an Insomniac game if it did not had crazy and over the top weapons. Let me begin my mentioning the Pixelizer, which as the name suggests will turn your enemies into 8-bit pixels! And when they die they will be blown into little pieces of pixels. Furthermore, you can use the Pyrocitor to burn your enemies or fusion grenades to simply blow them away. Then there are some old classic gadgets like the Groovitron which makes your enemies dance giving you the perfect opportunity to take them down. The in-depth weapon and gadget system and the RPG like progression and upgrading features goes a long way in encouraging the player to collect more bolts, find raritanium and Holocards.

You will also be able to play as Clank in the game and although these sections are short and sweet, they give the player a break from the heavy action sequences when Ratchet is involved. Without spoiling much, the bosses are in line with the previous entries in the game so expect a reasonable amount of challenge if you are not well equipped. 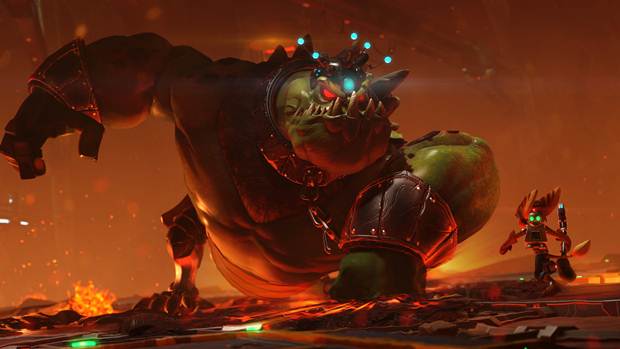 "Overall, Ratchet and Clank is a nostalgic experience. It features a fairly long campaign, excellent and funny voice acting, top notch production values, and a ton of things to unlock, upgrade and collect."

If there is one thing where this remake falters is that it may feel and play quite similar to the previous games. Although visual effects are a step above anything we have seen in the franchise, the core gameplay is largely similar. You will still be collecting bolts, solving mini puzzles, taking out crazy enemies, using the swingshot to swing across gaps and quickly slide during on the rail sections to save Ratchet and Clank from danger.

There is no true innovation here and although what is present is really done well, we can’t help wonder whether the mechanics are getting old especially given that this is the first major Ratchet and Clank game in the last two years (if one does not consider the spin offs). We also came across a few technical issues like frame rate drops but honestly, you won’t even notice them and these instances are very rare.

No true innovation in gameplay and feels largely similar to previous entries.

Final Verdict:
GREAT
Insomniac Games have crafted a beautiful reimagining of the original game that must be experienced by every fan of the series. It may not impress old fans of the series due to it being largely similar to previous entries but it will certainly impress new comers.
A copy of this game was purchased by author for review purposes. Click here to know more about our Reviews Policy.