Ratchet & Clank: Into The Nexus Wiki – Everything you need to know about the game

Everything you need to know about Ratchet & Clank: Into the Nexus.

Ratchet and Clank: Into The Nexus is the latest and highly anticipated upcoming action adventure platforming game from famed video game developers, Insomniac Games. In the Ratchet and Clank timeline this is set to be the 12th instalment in the franchise and the fourth (as well as final) game in the “Future” series of games.

This close to release it is rather uncommon for so little development information to be available to the press and media outlets, but what few details we do know are certainly very important. A long standing characteristic of the Ratchet and Clank games has been a commitment to solid gameplay without sacrificing what is, in essence a platforming game. This has always been accomplished through the implementation of a refined control scheme and clever in game mechanics that allow the player to manipulate the world around them in various ways in order to progress forward in the game.

To help this decidedly more modern Ratchet and Clank games retain their traditional standard. Insomniac Games have made sure to let players know that despite this games location in the “future” series, it will still be taking place in exotic locations with unique and original designs that can only be found in the R&C universe. The implementation of new weapons for our heroes to wield allows them to dispatch their enemies in various ways, bringing back the much loved Skill Point mechanic for improving your experience as you go relative to you skill level.

The illusive element, Raritainium will be put to use as a gameplay mechanic that goes hand in hand with the skill points. Raritainium will be used to upgrade the various weapons that you gain access to throughout your far reaching quest. Clank will be used in new ways now, being used to solve puzzles and navigate his way through dangerous mazes to help add another layer of depth to the already exceptional Ratchet and Clank Gameplay. 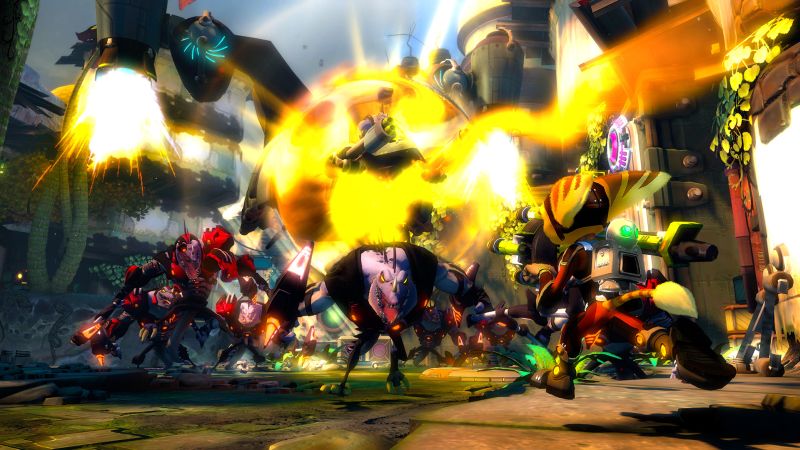 The story opens with our two heroes, Ratchet and Clank providing an escort for two captured and highly dangerous villains that go by the names of Vendra and Neftin Prog. The two criminals are being transported to a high secrutiy prison called the Vartax Detention Center, where they are expected to spend a great deal of time locked away. The two genius criminals somehow manage to engineer an escape plan and escape amidst the chaos of a mass jailbreak. It’s in the ensuing chaos that our two unfortunate main characters find themselves stranded and lost at the edge of the galaxy in a long abandoned sector of space.

With the intent of tracking down and serving justice to Vendra and Netfin, the duo tracks the couple to the planet Yerek where they hope to capture the escaped convicts. Little did they know that the planet Yerek plays host to a series of once haunted city states. After a series of unfortunate events and unforeseeable circumstances the pair stumble across an inter-dimensional “crisis” that has the potential to threaten the existence of our known universe, forcing our heroes to leap into action yet again to save existence as we know it from complete and utter destruction. But what choices our heroes will make along the way are a mystery for now. 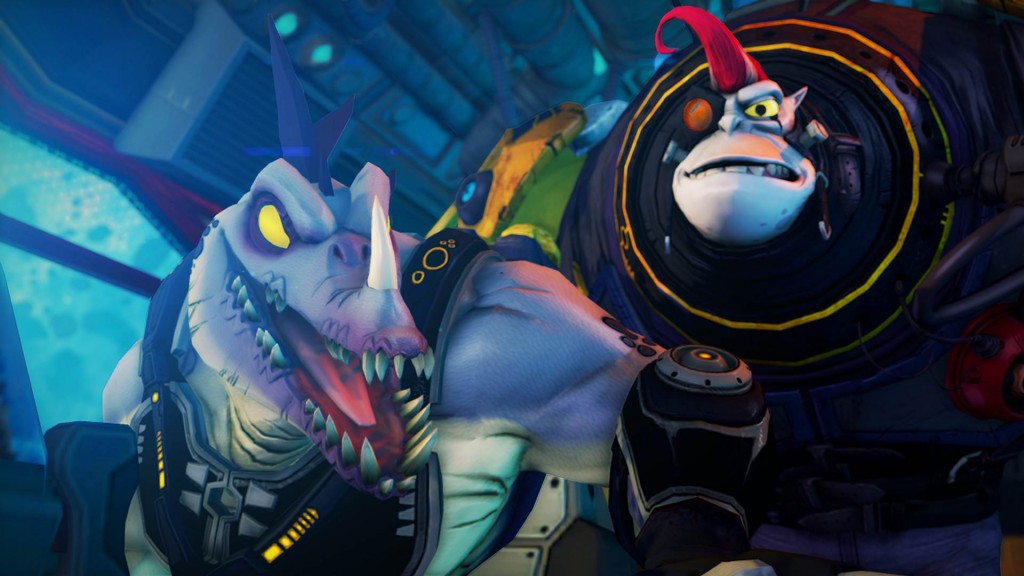 Ratchet – Ratchet is one of the Lombax, a race of bipedal anthropomorphized cats that share strikingly similar traits with human beings. Ratchet started out as a lowly mechanic wishing for adventure and bigger, better things. This and more came true when he met a strange little robot by the name of Clank.

Clank – Clank is a small little robot, no bigger than a backpack that escaped from a robot plant on the planet Quartu. After a failure to properly escape in a high speed chase with his once owners, he crashes close to a large plateau on the planet Veldin, the same planet that Ratchet resides on. Clank turns out to be the catalyst that sparks the chain of events that leads to a less than ordinary life alongside his Lombax friend.

Vendra and Neftin Prog – A pair once captured, now escaped and wanted convicts who were originally intended to arrive at Vartax Detention Centre where they would do their jail time. This tricky couple escaped from the clutches of the law and are now on the run, hiding out on the planet Yerek and being protected by the Thugs-4-Less organization. 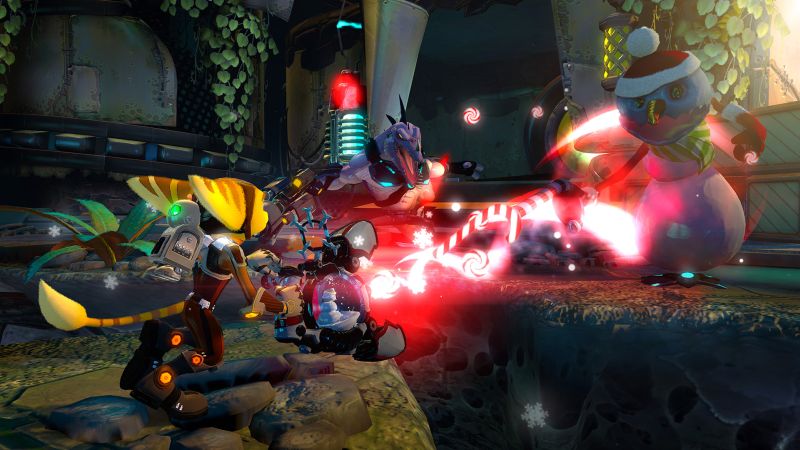 Something the Ratchet and Clank series has always had in spades is a diverse and interesting array of weapons and gadgets for the players to use. Some classic fan favourites will be making a return to the series in “Into The Nexus” such as the fusion grenades, alongside the aptly named “warmonger”. But fanservice is only acceptable up to a point, and from there on you need new pieces of equipment for the player to use. That’s why Into The Nexus introduces new weaponry such as the vortex cannon.

Once this cannon has been deployed in a fight, it will generate black holes which will suck your foe straight into another dimension. There’s the OmniBlaster, which is fundamentally just a fancy shotgun. The Winterizer is icy cold weapon that blurts out freezing gold tornadoes, quickly rendering your target immobile and turning them into snowmen. This latest game in the series also introduces the player to “The Nightmare Box”, a simple yet devious creation that scares enemies stiff, leaving Ratchet with plenty of time to eliminate them with the various tools at his disposal.

And what arsenal would be complete, without a Repulsor? The Repulsor suspends the enemy in mid-air through the use of strange technologies leaving them vulnerable to Ratchets attacks. But this is just a taste of what lies in wait in the full game.