Posted By George Reith | On 11th, Jan. 2012 Under Reviews | Follow This Author @GNReith

Rayman is one of the more instantly recognisable figures in gaming history, yet his time in the industry has been up and down over the years. Initially starring in his own 2D platformer, it was the subsequent 3D sequels that went on to define Rayman’s place in gaming. After he somehow got mixed up in the Raving Rabbids franchise back in 2006, fans had begun to lose hope of seeing any new Rayman games that weren’t a part of the party genre. It’s nice to see Rayman back to his roots in Rayman Origins then, a game that is able to bring the 2D platformer into the modern generation of gaming with minimal levels of compromise.

As far as plot goes we’re left with a fairly classic Rayman experience; a plot that is thin enough to let the Rayman universe and its wacky charms take centre stage. Rayman and his buddies are hanging out at the snoring tree snoring away (unsurprisingly) until an old granny, disturbed by their noisy napping, unleashes evil upon the world. Rayman and a core selection of allies set out to free the imprisoned electoons who can restore the world, along with Betilla the nymph and her sisters.

The first thing one notices about Rayman Origins is the game’s art style. Powered by Ubisoft’s new art engine, Origins is an intense visual foray into a crazy world of hand drawn backgrounds and lush animations. It’s hard to describe in words, but a quick glance at a trailer will show you the technical and artistic competence of the new visual style. I never thought I’d hear myself say it, but a Rayman game may well have had the best visual style of 2011. These tasty graphics are complemented by some suiting music that offers a series of bouncy and memorable tunes that are complementary of the game’s bright and vivid aesthetic. 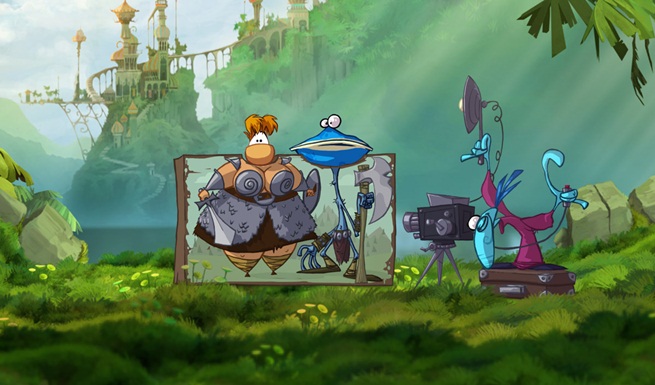 Rayman is one of those odd franchises that has seen a huge amount of change over the years. Though he began as a 2D platformer, it was his 3D adventures that gained Rayman a majority of his fame and acceptance. It seems odd then that Rayman’s big return to form would be in 2D, and it seems stranger still that such a simplistic 2D platformer could justify a full retail price. These issues become moot whenever you get the controller in your hand though, for Origins plays as smoothly as it looks. In fact, its simplicity is part of its charm, with only a handful of actions being available to the player. This is a game that justifies itself on skill alone, a fact that becomes all too evident as the difficulty ramps up in later stages. The game’s pacing is generally spot on, with levels getting suitably more challenging as you progress, and with a new world and set of powers opening up to the player just as things start to slow down. There are a few odd boss battles and individual levels that break from the game’s usually steady learning curve, and it arguably takes a little too long to gain some of the game’s more interesting and memorable abilities, but there’s no doubt that Ubisoft were at the top of their game when designing Rayman Origin’s gameplay.

The smooth and satisfying platforming is really brought out by the game’s levels, an impressive mix of visuals innovation and classic platforming at its best. The individual worlds offer an impressive visual spectacle, with various themes that are suitably zany and weird. The usual tropes like jungle and ice worlds show up with their own Rayman twist, but levels like a desert made out of musical instruments offer an originality that a lot of platformers lack. The levels perform well on a technical level as well, with enough memorable sections that stand out alongside a series of well placed secret areas that allow the player to free more electoons. Though the player needs a certain amount of electoons to progress to later levels of the game, there is often little incentive to recover electoons outside of this. That said, despite usually being the type who’s too lazy to bother with in-game collectibles, I found it oddly rewarding to collect the extra electoons. Even though there was no great reason to do so, Rayman Origins is one of these odd games that compels you to explore its inner depths. Maybe its the level design, maybe its the smooth gameplay and buckets of charm. Either way, Origins remains strangely addictive throughout, even if you can never quite work out why this is. 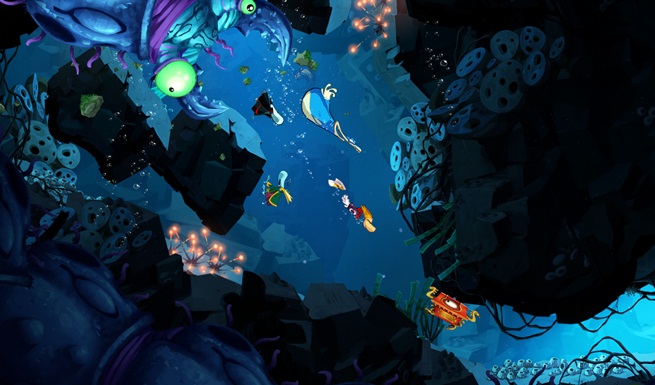 The level design remains spot on throughout the game

What really gives Origins the edge over other contemporary titles in the platforming genre is the inclusion of four player co-op. Though there is no option for online multiplayer of any kind, Origins offers classic couch co-op gameplay that is easy to get into. It’s drop in/drop out, making for an easy game to set up, and the simplistic gameplay style and bright visuals mean gamers and non-gamers alike are going to enjoy getting involved in a session of Rayman Origins. If you aren’t too prudish about getting smacked around, Origins is infinitely more enjoyable with multiple players, even though the levels don’t really change in any meaningful way. It also gives the already impressive amount of levels greater replay value, making for a game that, despite its simplicity, is well worth the price of entry.

Rayman Origins is an easy game to recommend to anyone. Its simple but satisfying mechanics and colourful visuals make it appealing to adults and children and to casual and core gamers alike. The awesome four player co-op allows for groups to get involved together, and I can sure as hell see Origins being a better family title than anything on the Kinect or PS Move at the moment. It’s just a shame that it released at such a hectic time of year alongside so many triple A titles. Let’s just hope that consumers are able to still take note of Rayman Origin’s quality over other contemporary titles that may be better advertised.

This game was reviewed on the PlayStation 3 and Xbox 360.

Learning Curve is a bit messy, Can get repetitive, Might be too simple for some initially

A graceful and refined execution of an old-school platformer for the modern generation, Origin's creative visuals and elegant simplicity make it a game for everyone and not just fans of the genre

A copy of this game was provided by developer/publisher for review purposes. Click here to know more about our Reviews Policy.
Tagged With: ps3, rayman origins, Ubisoft, Wii, xbox 360