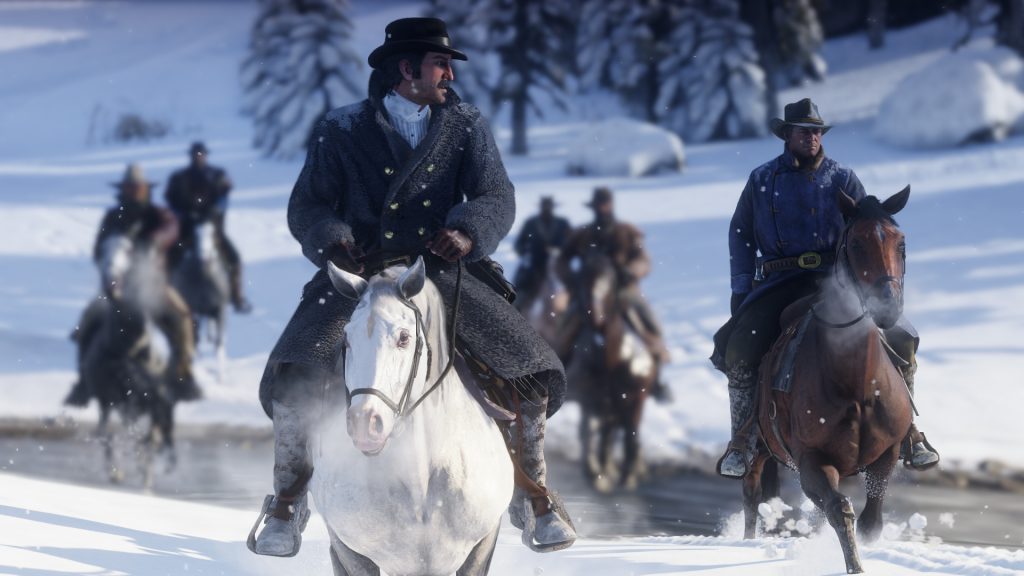 Red Dead Redemption 2 definitely seems to be the most ambitious and detailed game Rockstar have ever made – which is saying a lot, by the way – and that has become very apparent since new details on the game have started emerging over the last few days. We now have information on several other things in the game, from its NPC interactions, to the way the game handles player agency, to indoor environments in the game, and this information is definitely very encouraging.

“Being immersed in a credible world with a captivating story, capable of engaging the player, while giving them the freedom to lose themselves, then returning to the main quest in a natural way, is something important for us,” Rockstar co-president Rob Nelson said in an interview with JeuxActu. “And that was our main goal for Red Dead Redemption 2, to erase the boundaries between all these aspects to make it coherent and organic. Everything must appear natural, without any transition or lag, to reinforce the sense of immersion and connection between each mission.”

This led Nelson to speak about what looks like one of the most impressive things in the game, which is dynamic interactions with NPCs, and how these can lead to emergent gameplay moments. “For example, in the camp, a simple conversation with an NPC can result in a bank robbery,” Nelson said, “or reveal important details about the story, background, and thus trigger a new mission that the player may want to do right away or later. Simply leaving the camp to search for supplies may allow the player to discover other interesting activities or other goals. Everything is done to reinforce the feeling of embodying the character Arthur, an outlaw who is part of a famous gang, not to mention that everything must remain as entertaining as possible.”

“The gang needs money to do this, you will have to carry out missions as diverse as various to rob banks, intercept trains, steal from people, hunt, but also resell,” he continued, then delving deeper into the aspect of player choice and agency in the game. “There are 1001 ways to make money, even outside missions, in an honorable way, and less respectable too, to let the player do what he wants. You can kill people to steal their money, but you can also threaten them and extract their currency less violently. To leave the choice to the player is very important for us. It is not a Manichean system, it is not good against evil, everything is nuanced. Of course, we play Arthur and he has his own character, but you are given the opportunity to shape his way of behaving a bit.”

This balance between player choice and having a more hand-crafted and guided experience, in fact, is something that is apparent in the open world gameplay itself. For instance, you can’t change the environment too much based on your actions in the game, something that other recent open world games like Breath of the Wild, The Phantom Pain, and Far Cry 5 have actively encouraged. For instance, IGN asked Nelson in an interview if, for example, players would be able to set fires to entire forests and structures, to which Nelson said, “It would be nice, but no. Because it’s not practical. You could burn structures down, but a forest fire would change the map in such a way it would change the feeling of the world and the things that are in there.”

In fact, Rockstar even played around with the idea of procedurally generation optional missions for companion characters, but decided against it because they felt it would be contrary to the kind of hand-crafted open world experience they’re trying to build. “We played around with those ideas of procedural companion missions,” Nelson told IGN. “We did have that in there and we found that we could not get the level of connectedness and sophistication that we wanted for those sort of experiences. […] I suppose you could do it, but […] the way that we make these worlds is [to] basically handcraft them. And so that would be some sort of procedural thing that would happen, and the content there – it’s just not practical. [For it to] feel consistent with what we’re trying to achieve with the world.”

One other thing that Nelson spoke of was the indoor environments in the game. If there is one thing Rockstar’s open world games have always been criticized for, it’s that in spite of being huge and incredibly detailed, they are either completely lacking in any indoor environments, or the ones that do exist are lacking in any real detail. That, however, seemingly won’t be the case with Red Dead Redemption 2. “For Red Dead Redemption 2, we tried to go further in the interiors,” Nelson said in the aforementioned interview with JeuxActu. “You can go into a house, open the drawers, take the jewelry in the drawers. Small things in even smaller things, so that the world is the deepest and most credible possible. From big coffers to small pockets in people’s jackets, you can steal everything, without ever knowing what you’re going to fall on. We tried to create a consistent world in which it is possible to jump and hold onto a train running at full speed, enter the cars, find a bag, open it and take what’s inside, come out the train without being spotted, all this will be possible.”

Red Dead Redemption 2 launches on the PS4 and Xbox One on October 26. Stay tuned to GamingBolt for more coverage on the game.