Rekoil is best described as a game where you spent ninety percent of your playtime questioning its existence. Waiting in the lobby for the best part of an hour with one other player with a third dropping in and out, I had to double check whether or not people were aware of its release. After gambling on the aspect of taking a coffee break in the hopes a match would be loaded upon my return, I found myself alone without a hope in hell of finding a match. Deciding to load up a custom match in which I was the only person on the map I figured it was best to familiarize myself with controls and map layout for the one in ten chance I might find a match later on in the lobby.

When I came back to the online lobby my unknown friend had returned and after waiting another twenty minutes in the sheer desperation that we might get to actually play, two messages later we quit the game and went off and played something else. Rekoil is a game that would best be known as Reject, the lack of people actually aware of the game’s existence which was limited to the amount of digits on my hand, borders the realm of trouble and worrisome. If people don’t start embracing the game or the publisher doesn’t do something unique to make people more aware of the game, it will undoubtedly burn out very quickly. 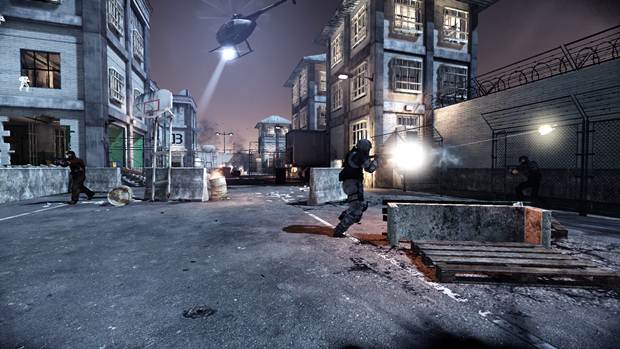 "However, when I finally did get round to playing with other people I was joined by the very same people who had abandoned me earlier on, plus a poor soul who had decided to join in on the game. If clan names had been available I would have taken lead and appropriately named us The Lonely Nerds Club."

However, when I finally did get round to playing with other people I was joined by the very same people who had abandoned me earlier on, plus a poor soul who had decided to join in on the game. If clan names had been available I would have taken lead and appropriately named us The Lonely Nerds Club.

The game modes available to the player don’t do much if anything at all in providing you with choice, let alone a selling a point as to why you should be playing this, rather than a certain popular shooter that it tries so hard to imitate. The amount of desperate attempts, flaw imitations, poor-man substitutes, and generic run of the mill shooters that over-saturate and pull down this genre of game, seems to be scrapping the bottom of the dutch pot for what can served up the following year.

Where the majority of free-to-play shooters try their hardest at being unique from each other, and setting themselves apart from their full priced, triple-A,  retail store competitors, Rekoil doesn’t even bother. There are ten maps available to play on, all generically named after something fairly similar that we’ve all seen and heard in other games. Village, Prison, City Park, Subway, and what ever else comes to mind. The choice of game modes here are also a disappointment and fail to bring anything new or inspiring. You have your Deathmatch, Team Deathmatch, Domination, Free for all…yes you get the idea of where this is going. The only mode worth mentioning and whether or not it’s worth playing is down to how you’re feeling after reading this review, Rekondite. 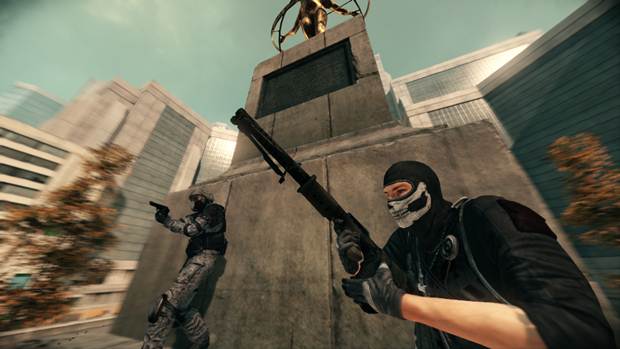 "Getting a feel for the guns is a failure of the mechanics in itself, as to whether or not the bullets decide to land on your opponent is entirely their own decision."

This basically puts one of the players in the match into the shoes of an invisible large creature of some sort and has you stalking the other players with a knife. As the game doesn’t back this concept up with a single-player story mode I had no idea why it was even implemented in the first place. Character classes don’t provide any background information to the game’s universe neither. As far as I’m aware I can change between four to six different character classes at any point in the match, change any weapon loadout at any point in the match, and the fact that I even called this a weapon loadout is a stretch too far.

The word “Basic” clearly doesn’t cut it here, I think the word “Quick” is more appropriate, and this would sound insulting if it wasn’t true. The entire game feels and plays like it was developed over the weekend as if it was some kind of developer’s side project resulting from a lost bet with a work collegue. Gameplay and control mechanics are lackluster and simplified to the point of being awful, and there’s nothing within any of the weapon choices that standout strategically wise in providing you with an advantage or game-plan.

Getting a feel for the guns is a failure of the mechanics in itself, as to whether or not the bullets decide to land on your opponent is entirely their own decision. The guns carry no feeling of strength or accuracy and firing from the hip seems to be just as effective as aiming down your sights. There’s a huge aura surrounding the game and it’s called “Why Bother?” You don’t gain any sense of achievement or progression in your skills and questioning the topic of whether or not you actually have any skills, versus the more highly and likely case of broken mechanics earning you that head shot is probably the best answer to go with. 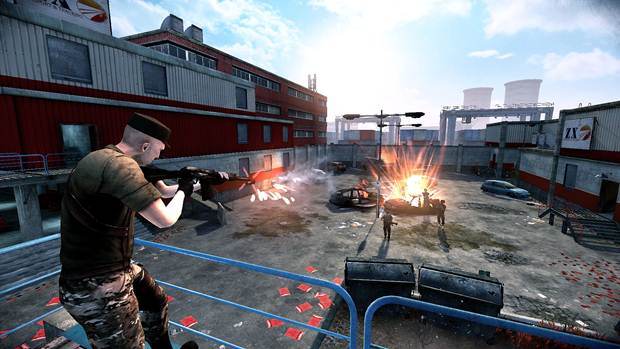 "Rekoil is by no means a bad game, assuming you follow Michael Jackson's lore that bad is the new good. but for the more traditional speaking people out there if you was to ask Who's Bad? Then Rekoil is your answer."

The bland selection of weapons and non-existing factors of strategy also go hand in hand with the game’s poor level design. Everything looks and behaves like the props of a movie set. Flaming barrels are immune to explosion, hanging cloths are frozen in time, trees are bullet-proof yet stone walls are pierced by gun fire, nothing here makes any sense. To top things off, Rekoil doesn’t fair well in the visual department neither.

Muddy textures, minimal details, and washed colour palette is prominent. The game also has a blocky-like appearance to it as well which extends past the level design into its character models and guns. Rekoil doesn’t look dated in anyway, it looks alpha, frankly I’ve played and seen better first-person shooters on the PlayStation 2 and the original Xbox.

Rekoil is by no means a bad game, assuming you follow Michael Jackson’s lore that bad is the new good. but for the more traditional speaking people out there if you was to ask Who’s Bad? Then Rekoil is your answer.

The potential for an indie game that pokes fun at generic first-person shooters is a promising idea, thanks to games like Rekoil.

Final Verdict:
POOR
All jokes to one side, Rekoil is a game that worries me as to where first-person shooters are heading if they keep handing out the word Innovate, without actually knowing what the word entails. Avoid at all costs.
A copy of this game was provided by Developer/Publisher/Distributor/PR Agency for review purposes. Click here to know more about our Reviews Policy.