A forgettable game let down by an abundance of crucial flaws.

One of the things that’s been the most pleasing to see in the games industry these last few years is the comeback of the horror genre. For a good few years, it seemed as if developers and publishers in the industry had collectively decided that horror games no longer have an audience, and instead started leaving in more heavily on action-oriented stories and experiences. These last few years, the pendulum has swung back, and horror is back strong than ever.

But while we’ve seen an influx of incredible games in the genre of late, not all of them have been home runs. Indie developer Stormind Games’ Remothered: Broken Porcelain belongs in that category, sadly enough. Acting as a sequel (and at times prequel) to 2018’s Remothered: Torment Fathers, a game that, from what I understand, has the reputation of being, at the very least, a solid horror experience. Broken Porcelain had the opportunity to iron out its predecessor’s rough edges, double down on its strengths, and deliver something even better, more well-rounded, more confident.

I haven’t played the first game, so I can’t tell how if Broken Procelain improves upon it. I can tell you what I feel about it in particular though- which isn’t anything good. Like so, so many games that swing and miss the way this one does, there are some good ideas in Broken Porcelain, but they’re all too often let down not only by rote gameplay, but also by an incoherent mess of a story and by an abundance of frustrating technical issues.

"Remothered: Broken Porcelain has some interesting ideas, but they’re all too often let down not only by rote gameplay, but also by an incoherent mess of a story and by an abundance of frustrating technical issues."

In Remothered: Broken Porcelain, you play as Jennifer, a young girl who gets expelled from boarding school, and is sent to serve as a maid at the Ashmann Inn. Things at the inn, however, quickly begin going horribly wrong, and Jennifer finds herself desperately looking for a way out of the inn while trying to stay hidden from people trying to kill her. It’s a mess of a plot, and the game does about as good a job explaining it as I did. It hurriedly throws in new elements on a constant basis, never really caring to explain them too much. Characters keep talking about things that it’s hard to care about, and the game doesn’t do a very good job why you should care about them.

The way Remothered: Broken Porcelain chooses to tell this jumbled, incoherent plot only serves to make things worse. Writing, for starters is clumsy at best, with dialogue that sounds unnatural and far too many conversations that have a tendency to drone on without ever really revealing anything that could be meaningful for the story. Characters themselves aren’t anything worth rooting for, while the stilted voice acting sounds like it’s been lifted right out of a game that released fifteen years ago. Cutscenes also all too often end abruptly, sometimes with abrupt hard cuts to black, sometimes with the camera suddenly jumping right into gameplay and showing your character from an awkward angle.

I wish Remothered: Broken Porcelain had better storytelling, but sometimes, it does show glimpses of a game that could have been genuinely scary. The way it uses its music and audio effects impressed me at least a few times. It almost made the audio feel like a dynamic part of the experience, and I really appreciate that in a horror game. The environments also mostly look good (though things do get a little blurry when you look closer, character models especially), and Broken Porcelain usually does a decent job of using its music, lighting, and environments to build up some atmosphere. 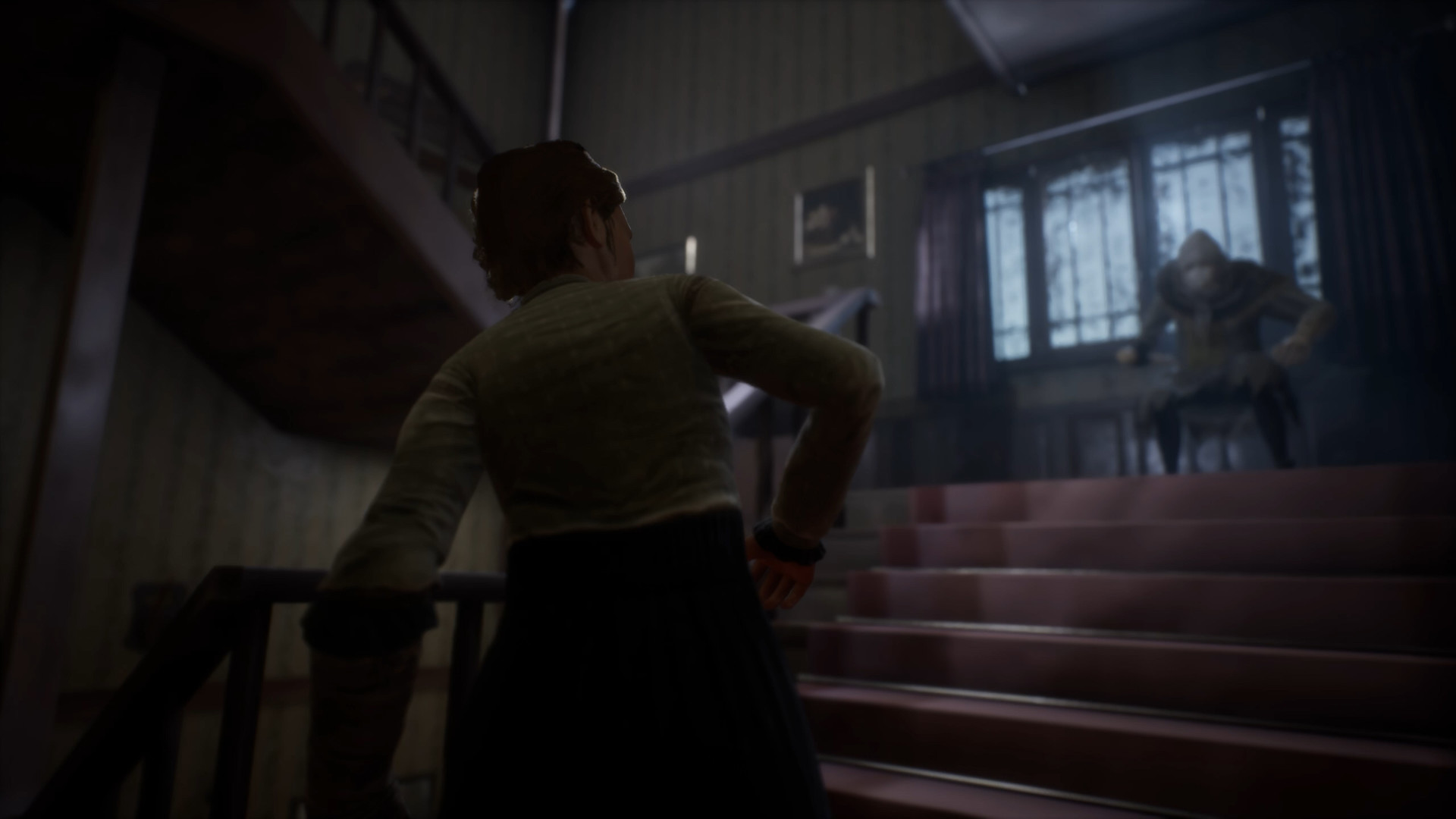 "Remothered: Broken Porcelain’s gameplay is rather bland and tedious."

The actual gameplay, however, is an exhausting mess, and absolutely kills any potential this game may have had as an effective horror title. Remothered: Broken Porcelain puts a lot of its eggs in the stalker horror trope, and as countless genre classics have proven – including recent ones like Resident Evil 2 and Alien Isolation – that can be a powerful tool to create tension and thrills. However, it also hinges on effective execution, which is where Broken Porcelain fails horribly.

Enemy AI, which is crucial in any game that relies on stealth and stalker mechanics as much as this one does, is abysmal. Sometimes, enemies are hyper sensitive to any sound you make, and can even spot you from around impossible corners or through covers. Other times, they’re unbelievably dumb, and they might stand still for a couple of seconds and allow you to escape or run circles around them. It’s also all too easy to cheese this poor AI and manipulate enemies’ movement patters, or how easily and abruptly they often decide to give up looking for you, allowing you to re-enter stealth. It destroys the illusion of tension and horror completely.

Outside of that, Remothered: Broken Porcelain’s gameplay is rather bland and tedious. There are some puzzles that tend to be rather straightforward, though the game often has a tendency to be frustratingly vague about what you’re supposed to do. Often, the objectives you get (call someone for help, get into the lobby, and the like) don’t really much to you, because the game doesn’t provide you with enough context for any of it. 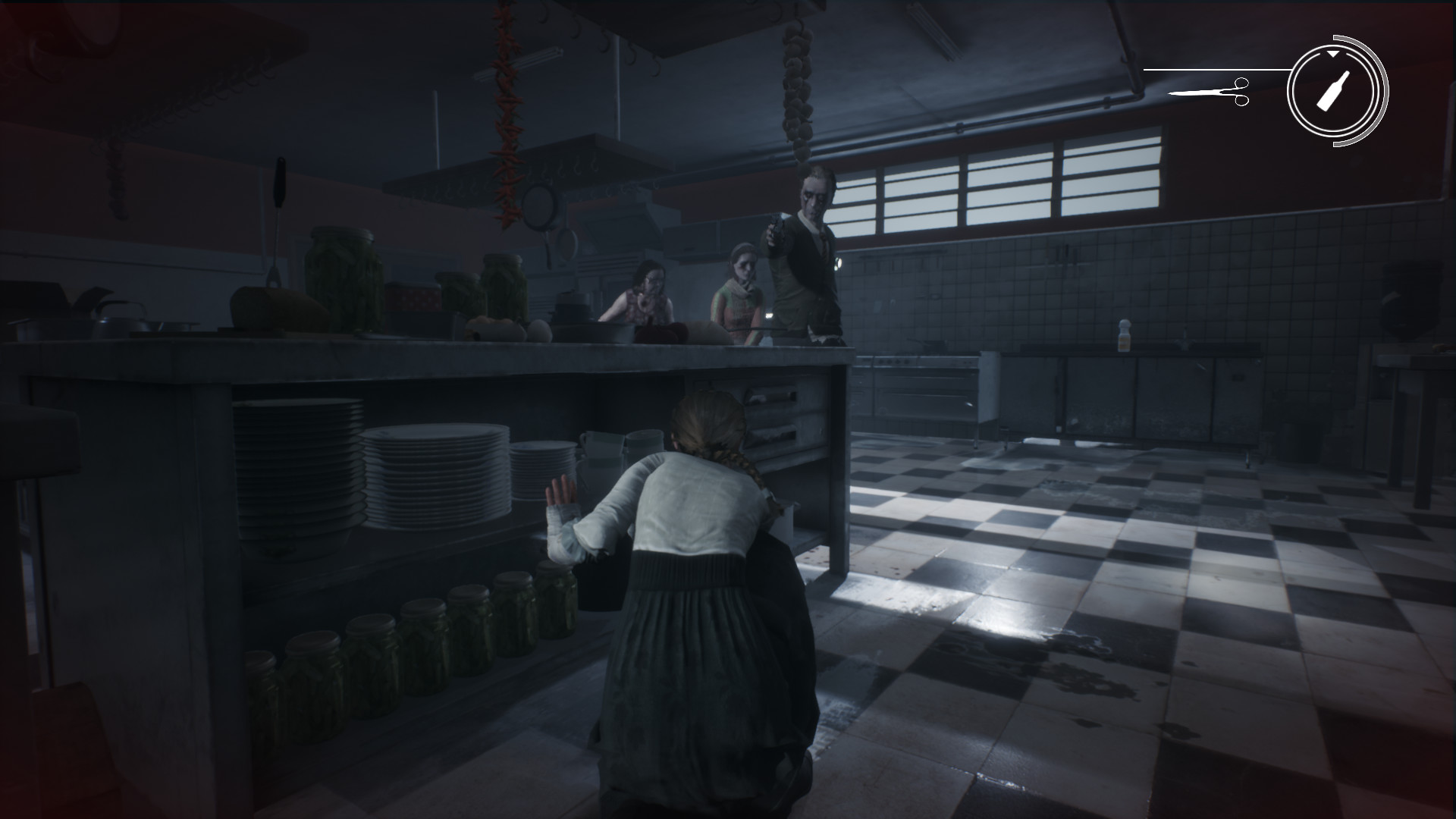 "A bevy of technical issues also interferes with gameplay frequently and in consistently frustrating ways."

It doesn’t help that a bevy of technical issues also interferes with gameplay frequently and in consistently frustrating ways. For starters, hitboxes and collisions are completely broken. I can’t tell you how many times I got stuck on some object, or in the geometry of the environment, even though there was nothing visibly blocking my movement. Several times, this happened while I was being chased by enemies. At times, the enemies would even block me between themselves and simple things like tables and chairs, and before I could scramble hard enough to get myself unstuck, I’d be dead. There are also audio issues (particularly with wildly inconsistent volume), frequent load times, texture pop in, and several other problems, all of which collectively make for a game that is very, very unpolished. Technical issues are never fun to grapple with, of course, but when they actively get in the way of the actual gameplay, the can be particularly grating.

Remothered: Broken Porcelain fails at most things it sets out to do. Its story is a convoluted and incomprehensible mess, its gameplay is bland and boring and let down by poor AI, and all of its technical issues only make things worse. If there are any redeeming qualities here, they’re not good enough to make up for all the ways the game keeps finding to frustrate its players. Investing time in it makes about as much sense as its name.

Final Verdict:
POOR
Investing time in Remothered: Broken Porcelain makes about as much sense as its name.
A copy of this game was provided by Developer/Publisher/Distributor/PR Agency for review purposes. Click here to know more about our Reviews Policy.