Opening with a killer punchline that sets the dark mood and unsettling tone for the rest of the game, it’s clear that players will be in for one  creepy and disturbing adventure as they explore the dark and grizzly future of this dystopian nightmare. After receiving an urgent phone call from a young Lady by the name of Hope, who’s clearly going through severe stress and nerve-wrenching panic, players will be placed in control of a distant hacker going by the name of Cooper.

By playing host as her eyes and ears throughout this point and click adventure, it’s Cooper’s priority within the game to take advantage of the networking and surveillance systems enforced by a power-hungry Government, so that Hope can be freed and bought to safety away from the clutches of this brash and corrupt totalitarian enforced state.

Where the game does so well in blending its narrative and gameplay mechanics, it’s best to think of it as “Watch Dogs Phone Simulator”. Take away the glitches and the trench coat wearing revenge cliché, who thinks it’s sexy to stroll across traffic while it’s pouring down with rain, and that’s essentially what you have. A game about hacking that makes itself evident throughout the entire aesthetic of the overall game. 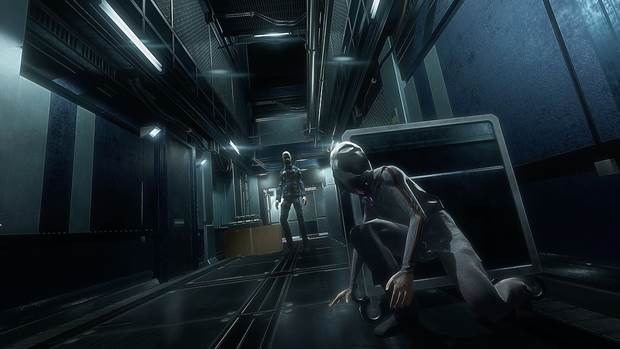 "Where the game does so well in blending it's narrative and gameplay mechanics, it's best to think of it as "Watch Dogs Phone Simulator". "

Upon entering the game where an introductory cut-scene sets up the narrative for the game, something stood out to me that some may consider very specific and personal in regards to my own experience. The game is over-confident in terms of how intuitive it thinks it actually is.

During this first five minutes of the game, players will find no tutorial system for how to play the game and how the control scheme actually functions. While it’s not anything of a major issue, tapping the keys and discovering what each key does when there’s actually little to nothing to do in this opening section of the game does indeed feel strange, if not left unfinished.

This feeling of left being unfinished is even more evident within the game’s main menu and options, where toggling various setting holds no explanation whatsoever as to whether or not you’ve set the particular option on or off. Along with non-rebindable keys in-conjunction with the game’s non-existent tutorial, having to tap keys and pause the game to find out what exactly each one does, just feels unpolished.

This theme of minimalism takes itself to far in some places and I sense this has something to do with the game’s overall theme for disregarding text in favour of icons in an attempt to look stylish and modern. Frankly it just looks like an overblown iPhone display and it would do well to make use of text, something of which I feel it could have incorporated successfully without actually harming its overall aesthetic of appearing minimalistic. 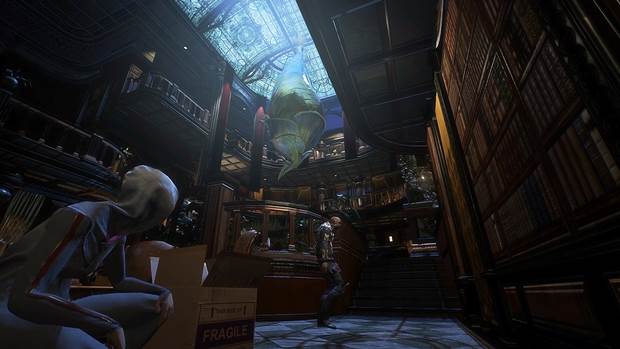 "This theme of minimalism takes itself to far in some places and I sense this has something to do with the game's overall theme for disregarding text in favour for icons in an attempt to look stylish and modern. "

After the opening of the game however it does make up for the lack off introductory tutorials, as it introduces the player’s character and how he or she is required to play the game from here on out. With all that being said it would seem as though giving the player control, during the introduction of the game seems quite pointless, as there’s nothing of importance they’ll be required to do but sit back and watch.

Once the game gets underway however it doesn’t disappoint. One of the game’s biggest stand-out points which helps the game differentiate itself from other games on the market is the way in which it tells its story, in reference to who the player’s main character actually is.

Where the game gives no real explanation as to what’s taking place within its narrative, which is done in order to deliver a sense of mystery. The main character in the game is not actually being controlled by the player. The player is simply a guide, a guide of significant importance that the main protagonist is highly dependent upon as the player is required to keep her alive.

One thing that is quite attractive about the game’s aesthetic and theme is the way in which it’s connected to elements both in-game and outside of the game. Pausing the game for example brings up a display titled “Connection Lost”, and due to the game’s mechanics of interacting with the main character and other elements of the game from a semi top-down perspective, the game does well in invoking a sense of great immersion, which makes you feel as though you’ve never really left the game even when it’s paused. 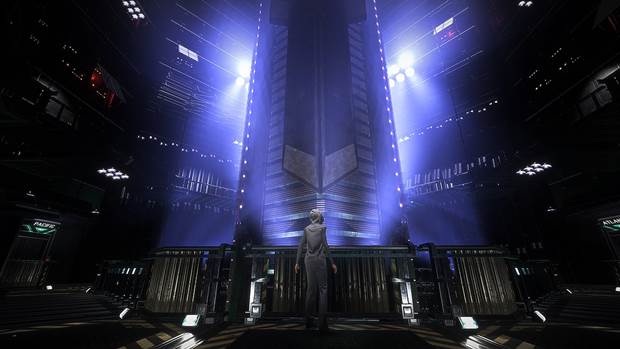 "One thing that is quite attractive about the game's aesthetic and theme is the way in which it's connected to elements both in-game and outside of the game. "

There’s something worthy to be said of the game’s camera angles and how it relates to the player’s control scheme. Switching through different perspectives through the surveillance system of the game’s levels, hold an amazing cinematic quality without actually taking anything away from the player.

This leads on to the game’s tremendous use of character voice acting and personality, that is both convincing and interesting to listen to as it succeeds in keeping the player interested in the game’s narrative. While it’s fair to say the game delivers on an immensely satisfying and detailed feeling of immersion, it does fall short in some places and sadly enough it breaks its own mold which leaves both the player and itself in a place of contradiction.

As the player comes across new objects to interact with within the game some such as audio notes, documents, PIN codes, and other things of interest within the environment.  The player’s own character which is best described as remote-assistance, fails to present itself in a believable manner in reference to the rest of the game’s connected theme and aesthetics. 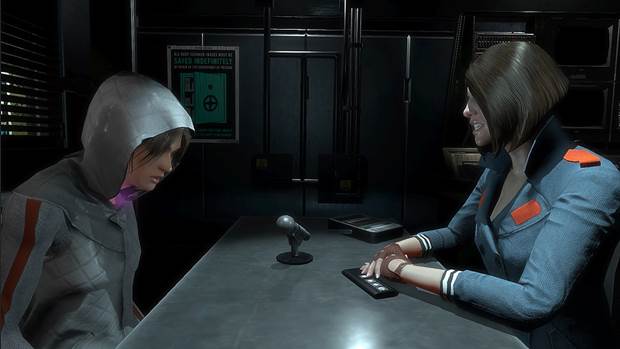 "There's some worthy to be said of the game's camera angles and how it relates to the player's control scheme."

As Cooper explains these items of interest along with their use-case within the game by speaking directly to the player, there’s a constant switching of first and third person perspective which leads the player into thinking that Cooper isn’t actually the character they’re controlling.

It seems as though Cooper is just explaining things to himself and this is highly evident throughout various interactions that the player will come across during the first section of the game. Interacting with charging stations where Hope is required to keep her phone battery sufficient so that Cooper, the player, can remain in contact with her is a prime example of where the game snaps its own sense of immersion.

Since Cooper explains these mechanics by talking directly to the player it just comes off silly and distracting, leaving the player in a bit of a muddle as to why he’s talking to himself about things he already knows. While the explanation of game mechanics is necessary for obvious reasons, had the design decision to have Cooper explain these things to Hope as a simple reminder as opposed to instructing the player, then it would have strengthened its narrative and its own character interactions between Hope and Cooper.

As the game places an immense amount of detail and focus towards its game mechanics and narrative through a system of point and click, there’s no attention being placed on enemy interactions by the way of combat, which believe it or not is actually a good thing. The level of intensity being delivered by the game as Hope is required to remain undetected as the player guides her through hallways and corridors of such, means that patience and precise timing through the use of stealth is key to the success of progressing through the game. 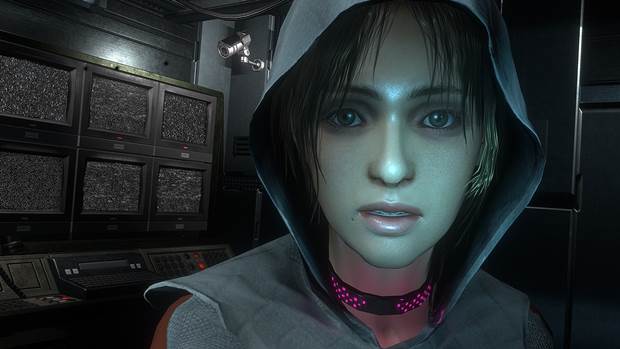 "Since Cooper explains these mechanics by talking to directly to the player it just comes off silly and distracting, leaving the player in a bit of a muddle as to why he's talking to himself about things he already knows."

Hope does have a few tricks up her sleeve however, and this comes in the form of simple gadgets and physical interaction by the way of pepper spray and tasers. While progressing through these lengthy missions the player is also required to solve puzzles and collect key items.

Working alongside Hope the player can distract guards using objects within the environment, keeping them busy while they lead her to safety. Where there is some entertainment to be found amongst its intriguing storyline and fascinating gameplay mechanics, the game isn’t without it’s one or two faults, which are predominantly down to its level design and pacing.

Guiding Hope through the game’s stunning atmosphere brings to mind an artistic direction reminiscent of Deus-EX, Remember Me, and the original Metal Gear Solid. Where these games hold strength in keeping the player’s attention by mixing up environments and delivering something new to see, Republique Remastered unfortunately fails.

Corridors and hallways that break themselves up through the use of kitchens and dining rooms bring about a sense of limitation and linearity. This doesn’t bold so well when the player has no real sense of direction as to where they’re supposed to be going, and this can lead to pointless pacing and backtracking. More times than none I found myself burnt-out through certain areas of the game where pacing issues let the game down and its objectives overstay their welcome.

"Working alongside Hope the player can distract guards using objects within the environment, keeping them busy while they lead her to safety."

The game’s visual presence is fairly decent when looking back to it’s original release back on the iOS platform. The game delivers enough graphical settings to tweak and mess with, and performance proves to be rock solid while still being scalable down to the lowest-end of PC hardware.

That being said the game does look amazing and this is primarily down to its art direction. It’s just a shame this is restricted to linear interiors of prison hallways and bland stairways. République Remastered is a game may be well worthy of anybody’s time should they find interest in rich gameplay mechanics and a compelling narrative.

Being told through a point and click adventure divided through episodes, with an emphasis on stealth and pacing there’s certainly a lot of depth and detail, replayability to a certain extent also. Should the pacing issues that some players may experience with the game be refined in upcoming episodes, then I feel the game could potentially become more enjoyable and hold the player’s interest for a greater amount of time.

Solid gameplay mechanics is where the game holds a great deal of strength.

Pacing issues stun the game's progress as well as the player's own interest.

République Remastered's combination of storytelling and visuals do not outweigh its faults.

A copy of this game was provided by developer/publisher for review purposes. Click here to know more about our Reviews Policy.
Tagged With: android, camouflaj, iOS, Logan Games, Mac, others, pc, republique remastered