An unexpected adventure awaits you.

It’s funny how Capcom’s Resident Evil 4 has aged over the years since its initial release in 2005. Back then were the blissful days of games telling stories of worlds we could only dream of. What makes it so funny, however, is the fact that Resident Evil 4’s story hasn’t aged well at all. Back in the day most gamers would consider the story so groundbreaking that it felt like Shakespearean poetry. But now, “I’m looking for the president’s daughter,” as Leon tells a couple of sketchy drivers on the way to a small town…it just doesn’t maintain that sense of realism any longer. I mean, who goes around touting about his secret mission? But besides the hilarious one-liners we have all come to familiarize with the Resident Evil franchise, the game, still to this day, doesn’t miss a beat gameplay wise.

For those unfamiliar with the story — or the legacy in which this game is considered to be the best of the series by many — you play in a third person perspective as Leon Kennedy, a former Raccoon City police officer in a series of events that take place six years after those of Resident Evil 2. A cult have kidnapped the president’s daughter and taken her to a small town in Spain. From there, Leon finds out about the strange goings on about the cult Los Illuminados, and their plot for control and some more eeriness you’d have to see to believe.

"For a game that’s well over a decade old and slapped with higher definition detail, Resident Evil 4 holds up surprising well in the visuals department."

For a game that’s well over a decade old and slapped with higher definition detail, Resident Evil 4 holds up surprising well in the visuals department. Some may be astonished that a game nearly 12 years old still looks pretty fresh, but others may realize that 2005 (when the game was released) was nearing the end of the GameCube generation — and graphics near the end of a generation are usually at their peak. Every blade of grass is as crisp and clear as any modern day game. You won’t find any smudge or muddy moments throughout the entire experience. Even in the pause menu, it’s nearly possible to see every detail on Leon’s classic brown, leather jacket.

Of course this game has improved definition and not an overhaul of graphics (aka remaster), so there will be those unfortunately sharp edges on items you’d expect to be smooth, or shapes in some places that are just out current standards. Back when games would have a graphical fade-in effect, Resident Evil 4 suffers from none of that. As far as the eyes can see, there are highly detailed backdrops that are instantly visible without an ominous fog casting its ugly gaze over a beautiful landscape. Everywhere you look there will be something — and it’s not fog (unless, of course, you’re in a foggy location).

Another aspect of the original game was its stellar voice cast that really made the characters jump out and be someone. Even back in 2005 voice over casts were just beginning to become mainstream for most games. Again, Resident Evil 4’s voice cast holds up spectacularly. From the laid back yet moody Leon Kennedy to the secretive and seductive Ada Wong, there isn’t a beat missed from any single performance. 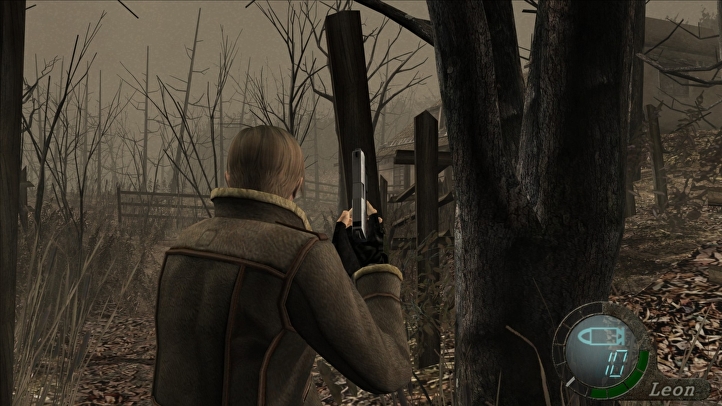 "The Resident Evil franchise has always been a fetch quest series: “run to this location, find crank, now run over there, put crank it, and the next door opens.” And Resident Evil 4 follows suit, to a much lesser degree."

The Resident Evil franchise has always been a fetch quest series: “run to this location, find crank, now run over there, put crank it, and the next door opens.” And Resident Evil 4 follows suit, to a much lesser degree. There are plenty of quests to do something trivial just to get to the next location, but the game changes the experience by adding in an AI co-op partner later on in the game. For those familiar with the original release and still true in the HD version is that the AI co-op partner actually does its job (notice how unspecific I am about who this partner is?). In-game situations will force Leon to protect his partner while the partner does a task that allows the duo to move forward in the game.

One of my fondest memories of the original release of Resident Evil 4 was its unique and often terrifying atmospheres. I’m not usually scared by horror games generally, but there’s something about quietly scampering around a sewer system knowing there are monsters waiting to pop out.

As the series takes an unusual spin by placing the fourth game in Spain, there are some rather outlandish landscapes: rural villages, condemned castles, humid lakes, and all out spooky locales. From unsettles hues of browns and grays, to pitch blacks and bloody reds, every moment holds up in many all-too-real moments throughout the entire experience. 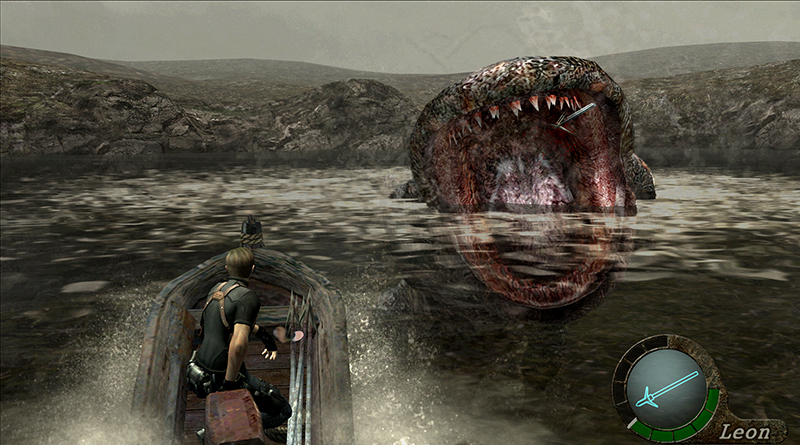 "What hit me as an unusual, and for the most part unfortunate, was Capcom’s lack of improvement on the overall controller layout."

What hit me as an unusual, and for the most part unfortunate, was Capcom’s lack of improvement on the overall controller layout. The controls are absolutely sluggish. Aiming takes the tap of the left trigger while the right analog stick is used to position Leon and his gun, rifle, or knife. Controlling the movement after pulling the left trigger is eye gouging slow. Sure, Resident Evil is supposed to be a slow paced horror game, but modernized games have proven that a game can be terrifying with speedy controls. On top of that the camera was never updated and modernized itself. You get a left pan, right pan, and it always goes back to center, over the shoulder perspective. It works, but it isn’t comfortable. If Capcom would have unlocked the camera and allowed for a full 360 degree rotation then this game would have been nearly completely modernized.

When you’ve completed the journey there’s bonus content waiting for you. The “Separate Ways” campaign lets you play as Ada Wong who’s mission takes place in parallel with the events of Leon in the main story. The Mercenaries mode is pretty much Horde: gear up and take out as many enemies to earn a high score. These additions, some of which were later included in the PlayStation 2 version, are a nice additive but do little to add much more to an already excellent game.

For a game that’s well over a decade old, Resident Evil 4 holds up extremely well. Its fantastic pacing, more-than-creepy locales, and abundance of terrific thrills allows this fourth game in the main series to hold the crown as the best game in the franchise. There are awkward and unnecessary moments in the story from time to time, and an unbalanced control system, but overall this game is still one of the greatest games of all time. It’s kind of a shame that the developers did not put in more effort to improve the visuals even more (other than the optional motion blur effect which honestly is quite bad) but looking back Capcom really hit their stride with this entry in the beloved series, I just wish they could do it again with the upcoming Resident Evil 7.

The story has its share of awkward moments. Also the controls are a tad old school.

Resident Evil 4 holds its crown as the best game in the series. A great voice cast can't always cover up some awkward story moments, but the atmosphere and experience alone should have almost everyone playing this game sometime in his or her life.

A copy of this game was provided by developer/publisher for review purposes. Click here to know more about our Reviews Policy.
Tagged With: capcom, ps4, Resident Evil 4 HD, Xbox One