Resonance of Fate (known in Japan as End of Eternity) is a JRPG set on a futuristic Earth, poisoned by an environmental phenomenon, where most of the remaining humans live on/in a gigantic construct called Basel. The game was developed by tri-Ace and published by Sega. It runs on the proprietary ASKA engine and is available on Microsoft’s Xbox 360 and Sony’s PlayStation 3.

Basel is a giant purifying machine buried within the Earth, and extending miles above it – the complete assembly is the Zenith System. In order to defeat the various plagues and cancers, humanity started constructing a city around the stem of Basel itself. However, this was not enough, and so human lives are tied to Zenith via Quartzes, which protect against illness but come with the downside of a set lifespan for humans.

The game’s plot revolves around the conflict between the ‘pure’ humans inside Basel, and the ‘impure’ outside. These outsiders have mutated to overcome the adverse conditions, and believe they are the next step for Mankind. The effort of scientists to gain power over Zenith is another plot-strand: they seek to able to resurrect the dead and free Humanity from having to live within the confines of Basel. 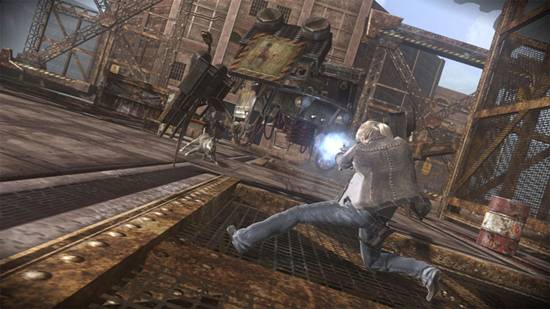 Combat is a combination of turn-based and realtime.

Resonance of Fate follows several staples of the RPG genre, such as a single-character party avatar (one character moving around the game representing the whole party) and fixed non-combat camera. However, the similarities end there.

Whilst moving around safe areas (such as the starting settlement) the camera is semi-fixed, and runs on rails following the player’s movement from the side; and the level designs reflect this: they are very linear, with only occasional intersections to other paths. In the world map – accessed by running to the edge of a safe area – the camera can be panned and zoomed around the ‘anchor’. This is what the player uses to set travel destinations, and movement paths in combat. In order to move around the world map, the player must set “energy hexes” into the map in order to unlock paths. These ‘hexes’ come in a variety of shapes and colours, and some even act as save points. Hexes can be dropped by defeated enemies, although some are granted by quest completion. Coloured hexes are necessary to unlock corresponding hexes on the map, and different shapes are needed to unlock different paths. This puzzle element to the game is pretty unique, and whilst the player is hovering around the map solving it, they are open to random encounters with enemies, as well as finding items and locations when placing hexes.

The Combat in Resonance of Fate is incredibly complex, so I’m going to devote some time to explaining it (or trying to) as the tutorials are somewhat lacking. The game uses the tri-Attack system: a mixture of turn-based and real-time combat. Players are able to move about and attack in real time, but doing so uses up ‘action points’. The character’s turn is over when these reach zero, or following a successful attack. Enemies are able to move whilst the player moves, but will not attack until after the character’s action points are exhausted. The player is able to switch between characters that have not yet had a turn (more on this in a moment).  Attacks need to charge before they can be unleashed, and during this time the character will be depleting action points. The time taken to charge an attack is proportional to the characters distance from the enemy, and higher level characters are able to charge more than one attack per turn for extra damage. 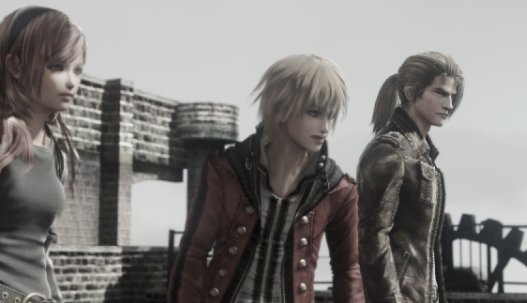 From L-R: Leanne, Zephyr and Vashyron are the playable characters

The player is also able to set a pre-determined path for the character to move along whilst attacking – this gives the character access to the Hero Move. Hero Moves do more damage, allow the character to charge attacks quicker and can be used to set up a Tri-Attack (more on this in a moment). Using these attacks will drain the Hero Bar, however, and this can only be replenished by defeating enemies. If the Hero Bar should become depleted, Critical Condition is entered: movement speed & attack power become almost zero, and any damage taken becomes Direct Damage.

In Resonance of Fate there are two kinds of damage: Direct Damage and Scratch Damage. Direct Damage is caused by Pistols and Grenades, and is immediately deducted from an enemy’s HP gauge; whereas Scratch damage is caused by Machine Guns, and is not deducted. However, should you cause Scratch Damage to an enemy followed by Direct Damage, the cumulative damage will be deducted from the enemy’s HP gauge. Therefore, Scratch Damage is best thought of as ‘Potential Damage’. This means that it is quite easy to one-hit-kill an enemy with a gauge full of scratch damage using even a weak pistol attack. Should a player character’s gauge become full of scratch damage, Critical Condition is triggered (regardless of the state of the Hero Gauge). The ability to set enemies up for a one-hit kill, and the fact that you start with one character who deals scratch damage and two who don’t, means that care should be taken when switching between characters – in order to deal the max damage possible in the fewest shots.

Tri-Attacks need resonance points (gained by running between two other player characters during a Hero Move) to happen. When a Tri-Attack is started, the player characters will run along the paths the attack has set, in a triangle based on their current positions. Anything within the triangle will be attacked for massive damage. However, each character needs to have at least 1 resonance point, and a full action gauge, to participate. The finishing position after each character’s Hero Move should be placed to allow a successful Tri-Attack. This means the player will need to think a couple of turns ahead to pull this off. Many of the random encounters will not give the player sufficient time to set up a Tri-Attack, so it is usually reserved for dungeons. 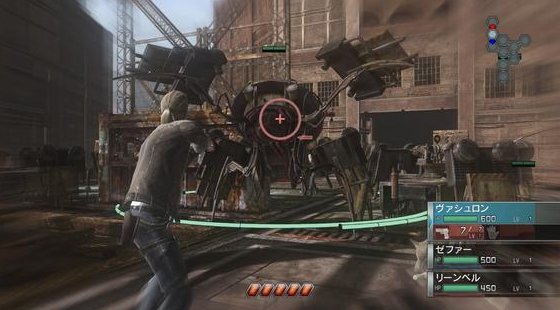 Attacks charge quicker the closer you are to an enemy.

Which brings me smoothly to the dungeons. I had a love-hate relationship with these: I spent equal amounts of time gnashing my teeth and dancing around the room after making the right sequence of moves to clear a boss. In Resonance of Fate, dungeons are not so much a level map with random encounters, but rather each hex (or stage) consists of a combat encounter, with some items available to collect. After each clearing each stage, the party can progress to the next. Boss stages are outlined in White on the dungeon map – this confused me at first, because on the world map safe areas are indicated by a white hex next to the name – so saving before entering these is advised.

Another interesting game mechanic is the passage of time. Whilst moving the anchor about the world map (without necessarily setting a destination) the player will see a cog-wheel moving in the upper-right corner of the screen. The coloured sections of this wheel are linked to the time of day: Purple is night, Green is morning and Gold is daytime. Some NPC’s are only present at certain types of day, and the random encounters are affected by the time too. This means the player will often have to waste spend time on the world map waiting for the day/night cycle to move on.

Movement is dealt with by using the analogue sticks. Y brings up the menu, and Start pauses the game. The combat controls are broadly the same, but the menu is disabled. The bumpers toggle between targets, B skips that character’s turn, A begins charging an attack (and triggers it once the charge is full), X brings up the hero move anchor (assuming the hero gauge is not depleted) and places it. During a Hero Move X also causes the character to jump into the air, leading to increased damage and cinematic display. However, the combat tutorials – which are optional – are presented as screens of text, before requiring the player to perform the action a set number of times to progress. This could be confusing to the new player due to the radical nature of the game’s combat system and its complexity, and detracts from enjoyment of the game. 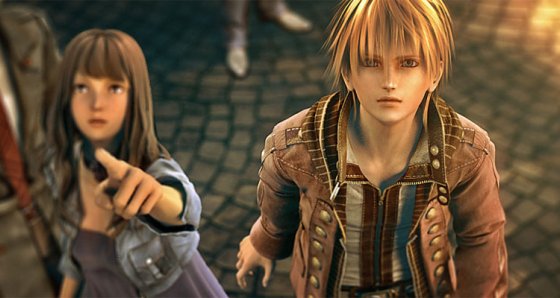 The pre-rendered cutscenes are truely a joy to behold; and the FMV isn’t bad either.

RoF’s graphics are great. The pre-rendered cutscenes are up to the usual high standard, but the in-game graphics and FMV sequences are also not too shabby. No woeful Prince of Persia differences here. The characters are well-realised and incredibly life-like. Clothes and Hair have their own animation/physics during battle scenes, rather than remaining static. And if you play your JRPG for the protagonist who could be male or female, there’s one of those too. RoF stands alone in the gaming market for portraying the Steampunk sub-culture in mainstream media, as seen by the many cogs and wheels which literally adorn the environment as you wander around Basel. A muted, washed-out colour pallet (apart from the characters’ outfits) adds to this feel; and makes a nice change from the usual frenetic/bright pallets seen in other examples of the genre. The day/night cycle makes its presence felt graphically too: colours become deeper and darker during night, then lighten and brighten (relatively speaking) during the day.  Sound plays the usual role in RoF as it does in other RPG’s – the soundtrack swells and dips at the appropriate moments during cut-scenes, and the battle theme is particularly generic. However, the combat music DOES change when Critical Condition is entered; and if I had my way, I’d make this tune the default battle music, as it’s raunchy guitar riffs are far more appealing to the player.

RoF is another game catering to the JRPG market – only without swords. The winding plot and slow pace mean that perhaps only serious fans of the genre would get maximum entertainment from the game. Which is not to say that it is a bad game; but probably one to rent before you buy.

RoF is another game catering to the JRPG market – only without swords. The winding plot and slow pace mean that perhaps only serious fans of the genre would get maximum entertainment from the game. Which is not to say that it is a bad game; but probably one to rent before you buy.

A copy of this game was provided by developer/publisher for review purposes. Click here to know more about our Reviews Policy.
Tagged With: JRPG, ps3, Resonance of Fate, Sega, tri-Ace, xbox 360