Marielle is a descendant of previous Star Ocean legends and serves as the vice-captain of the Astoria, which shot down Raymond's ship.

Star Ocean: The Divine Force Demo is Out Now for Xbox One, Xbox Series X/S, PS4, and PS5

The free demo follows the beginning of Raymond's story and offers roughly two hours of content. Progress can't be transferred to the full game.

Nina is a healer searching for a cure to a deadly disease, while Midas is a semiomancer and engineer for the Aucerian Kingdom.

Along with enhancing and learning new skills, players can also upgrade the robot D.U.M.A. to provide more benefits in combat.

Raymond is the caring albeit reckless captain of the Ydas while Laeticia is the resolute princess of the Kingdom of Aucerius.

After an encounter with the Astoria, Raymond and his crew evacuate to the fourth planet of the Aster star system where a new journey awaits.

The "Star Ocean Program Special Edition" will air at 4 AM PST on Wednesday. The RPG launches this year for consoles and PC.

Developer tri-Ace apologized for the delay in new information and revealed that it's "working hard to meet your expectations."

From a futuristic city to a massive kingdom with lush buildings, there's quite the range of environments in tri-Ace's next RPG.

The newest entry in the action RPG series debuts with a significant look at its world and story and gameplay elements. 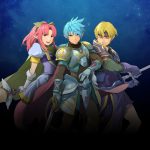 The studio's last original game, Star Ocean: Integrity and Faithlessness, released on the PS4 in 2016 to middling critical reception.

The remaster of the game gets a special launch trailer.

The lost RPG will come westward near the end of the year.

Star Ocean: First Departure R Gets First Details And Screenshots, Will Be At Tokyo Game Show

A first look at the upcoming remake.

The remake is getting a modern makeover.