You got your eight-bit in my grand-theft!

There’s something that has to be said about Retro City Rampage’s parody warning screen, prior to the ridiculous montage mayhem that later develops. Its crazy and it knows that. Crazy can be a good thing, especially since developer Vblank Entertainment tries to emulate what makes open-world games like Grand Theft Auto so interesting, all the while poking some fun. I certainly don’t mind it in games like Saints Row The Third. However, how much of what is essentially satire can really hold you over?

Retro City Rampage doesn’t take itself seriously, because the whole thing is a joke. And that’s the point. Your protagonist, simply called the “Player” who lives in the cutely-pixelated locality of Theftropolis City (Ho ho!), finds himself botching a bank heist right out of a certain super hero film starring William Fichtner for approximately a whole of five minutes.

The Player ends up running into Doc Choc and his time machining car, which is now broken because… well, because you broke it. So its upto the player, to take the role of the Player, and help the Doc get the parts he needs to fix up the time-travelling vehicle to… well, I guess to go back in time and stuff. Back to the Future, something something. Oh, and one of the villains looks like Dr. Eggman from Sonic the Hedgehog.

If only the game supported a way for the player to interact and point out every reference it ever uses from a TV show, cartoon series, movie, and video game that ever came out of the 80s. Because every time I saw a reference that I’m able to recognize, I tried to make a mental note on the total count. Then I end up losing count.

As far as the references and cameos themselves go, sometimes its done in a charming way, sometimes a bit too obvious. Whether or not this is the kind of the thing that amuses you to great degrees is entirely subjective, but its rather immediate that not everyone will appreciate the kind of attention that goes into get these cheesy one-liners or nostalgia trips. But for a game that’s solely built exactly on that, Retro City Rampage is definitely one of a kind. 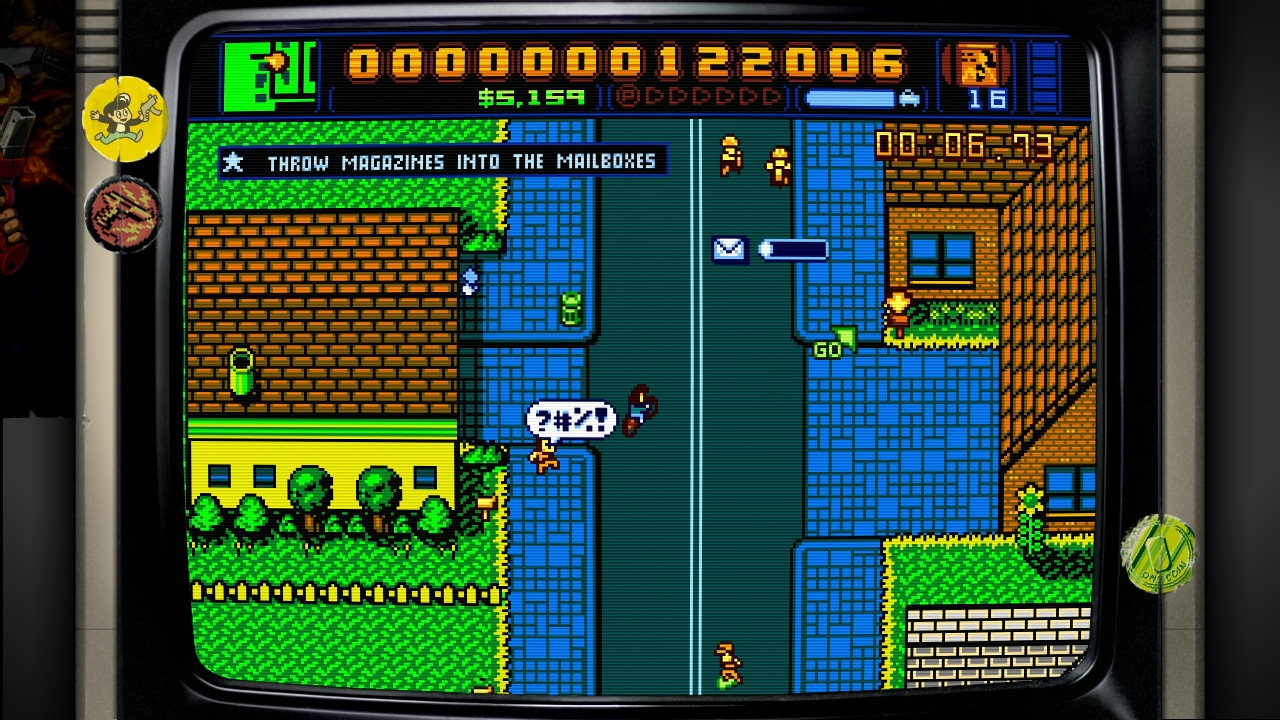 Its the look and feel of the game that makes it stand out, obviously channelling the spirits of the NES and Genesis generation of console gaming. Theftropolis City is a fun place to drive around in, when you’re not spending too much time mow-downing the colorful looking denizens. This is especially notable when you’ve been assigned missions to specific areas that you may have not visited before. As more missions are completed, new arcade-style challenges unlock, where you’ll be given a pre-determined weapon, and asked to rack up the kill count before time runs out. Missions tied to the story will help you progress further to unlock more missions and side-activities. But more on that later!

For the most part, Retro City Rampage is played from a top-down perspective view. Shooting in the game has a familiar feel, mimicking something you’d see in a twin-stick shooter. You can either use the right thumbstick on the control pad to shoot in all directions, or hold down on the X button to lock on a specific target. Projectile-based weapons provide good thrills, but you won’t find anything truly outrageous to complement the overall crazy tone. Melee-weapons, though, say otherwise, at least on the surface. But punching and swinging with them doesn’t share the kind of gleefulness that you get from a peashooter. Great variety of drivable vehicles though, especially if you like piloting a giant ape. Just don’t expect any aircrafts. 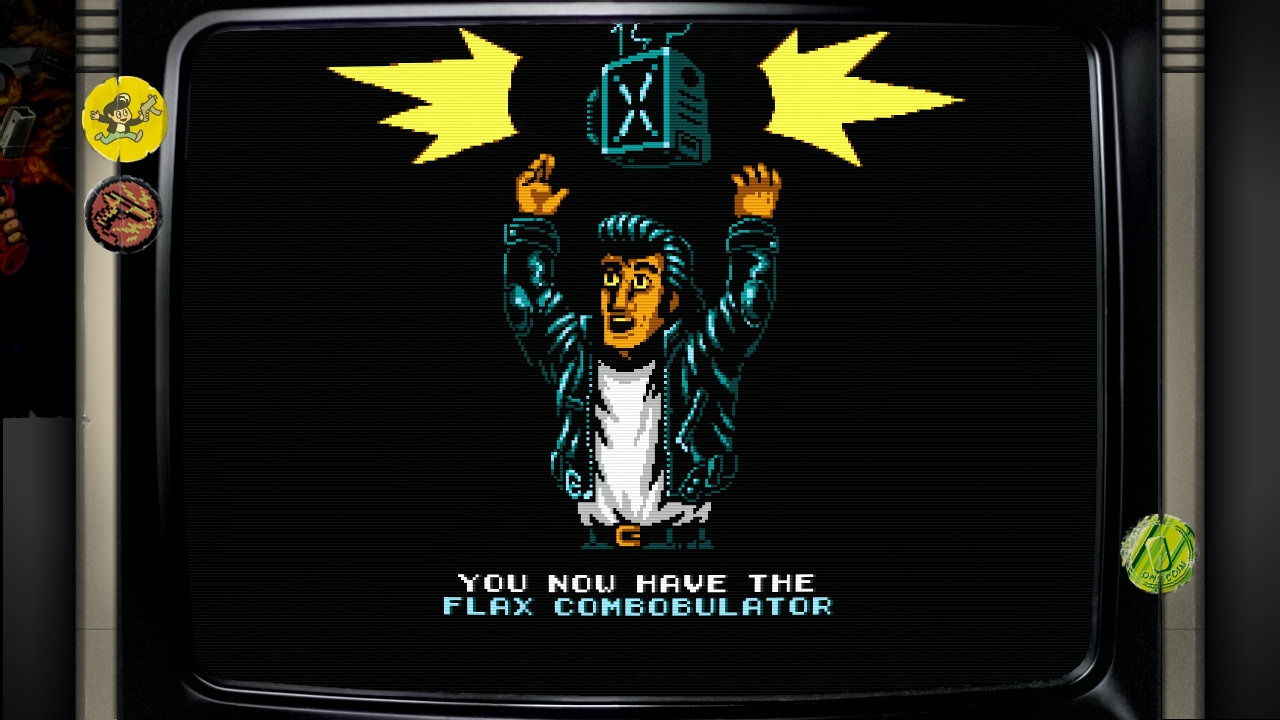 And speaking of relying on close-combat, I wasn’t really a fan of the jump-stomp. This was particularly annoying towards the end game, fighting wave after wave of enemies with your bare fists, then having to use a baseball. Sorry, but once you’ve given me a proton pack with a room filled with demonic gogo dancers, I’m already spoiled. Much of this can be said about the missions. Some of them have quirky set pieces and ideas, others feel repetitive. There’s only so many “Go to this location, deck this guy, here’s some witty banter, now go here” I can really put up with. Thought I do greatly enjoy one particular homage to a certain platformer from Twisted Pixel Games.

Art wise, it’s still impressive to see how a lot of the older 8-bit/16-bit titles are translated, yet seemingly tied together. While a lot of the game still takes place in Theftropolis City, more exotic locations can either be found on the outskirts, or through specific missions. The scenery is littered with detailed sprites, complemented by snarky signboards and hey, there’s even a subway system! If you’re a fan of chiptunes, Retro City Rampage provides a good assortment of beats. You can even download a free “Demo Mixtape” at their website.

Humorous tone. Theftopolis is a swanky place to drive around in. Sometimes creative missions. Excellent work put into the look, sound and feel.

Not everyone will get the jokes. Some missions aren’t all that interesting. Close-quarters combat isn’t too rad. Why can’t I shoot and jump at the same time?

Final Verdict:
GOOD
Those who don’t mind a steady dose of self-referential humor or waltzing down memory lanes can find a wonderful wet-dream in Vblank Entertainment’s downloadable action affair. Agreed, its not for everyone, but if you ever wondered what growing up two pop-culture decades ago looked like through another vision, Retro City Rampage more than fits the bill.
A copy of this game was provided by Developer/Publisher/Distributor/PR Agency for review purposes. Click here to know more about our Reviews Policy.