The Monkey Island franchise has been dormant for a long time, but in its absence, its legend has only grown. A standard bearer for all point-and-click adventure games, the classic series has aged amazingly well, with everything from its consistently sharp writing and absurd yet delightful sense of humour to its satisfying puzzle-solving loop and endearing cast of characters contributing to its unwavering legacy.

Marking the series’ return to the limelight for the first time in years, Return to Monkey Island is a significant milestone- but doubly so, of course, because it also brings back series creator Ron Gilbert into the mix. Alongside series veterans like writer Dave Grossman, voice actors Dominic Armato and Alexandra Boyd, composers Michael Land, Peter McConnell, and Clint Bajakian, and others, Gilbert leads a dream team of returning talent, and with this game, together they prove with stellar results that the charms of Monkey Island truly are timeless. While the franchise has surely delivered some excellent content even in the absence of some of that leading talent – most notably Gilbert himself – Return to Monkey Island feels like a return to form- an authentic experience that tugs the nostalgia bone perfectly, while also ensuring that it doesn’t rely on that one element too much. 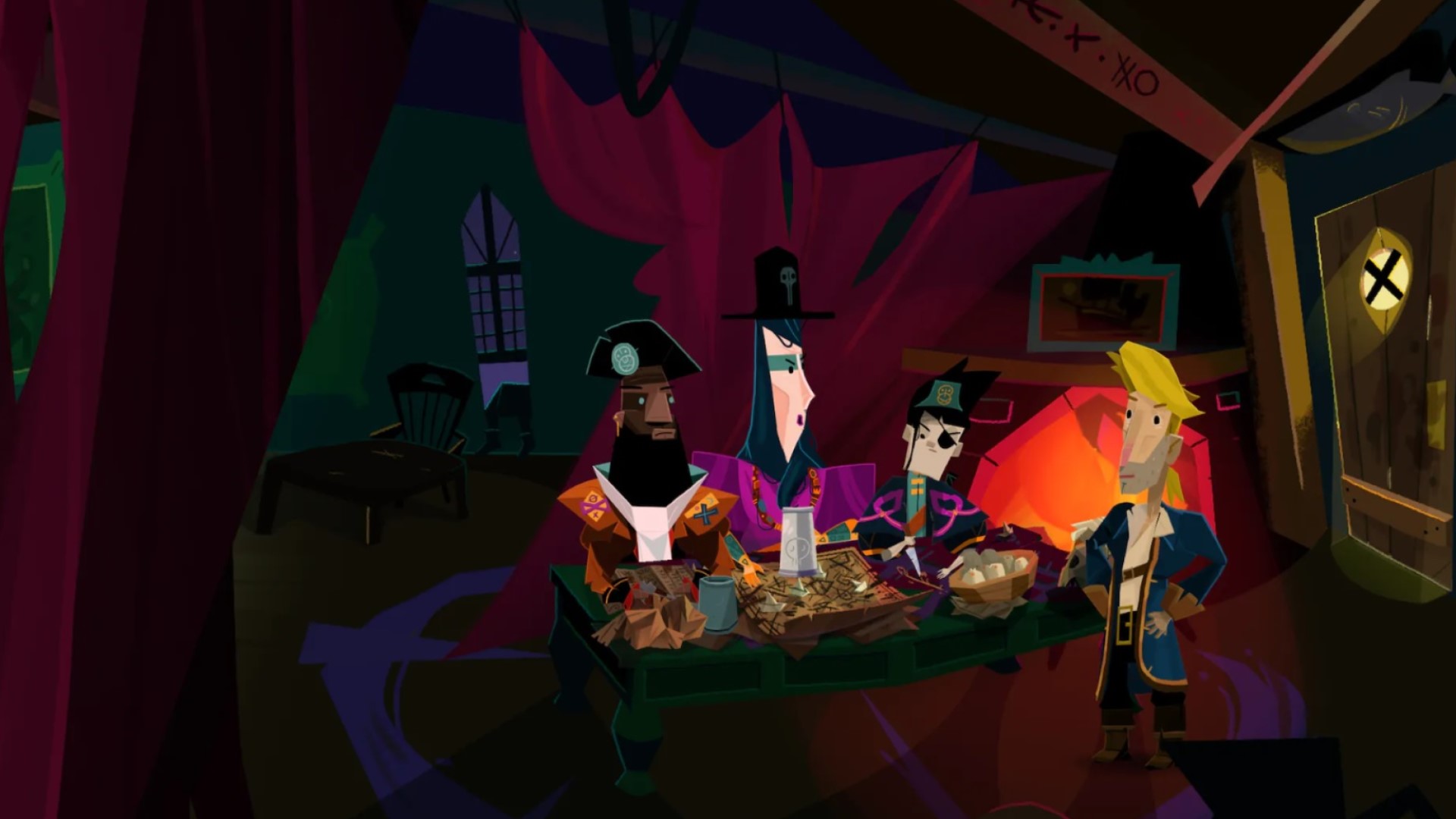 "Return to Monkey Island is an authentic experience that tugs the nostalgia bone perfectly, while also ensuring that it doesn’t rely on that one element too much."

Striking a balance between nostalgia and self-sufficient modernity is no easy task, as we’ve seen time and again with franchise revivals across all media more than a few times over the years, but Return to Monkey Island walks that tightrope with confidence. Returning characters, a soundtrack that would feel right at home in the series’ early days, jokes and gags referring to major events and obscure instances from past instalments, and of course, a story that respects the canon- all of this comes together to make you feel like it’s been no time at all since we last saw lovable protagonist Guybrush Threepwood and his cohorts.

At the same time, the game knows that it cannot simply bring over the Monkey Island formula as is and expect it to work in today’s day and age as well as it did in the 90s- and that’s not just because point-and-click adventure games have severely diminished in popularity since then. No, you can be damn sure that if a new adventure title released in 2022 with the same obscure puzzles, complete lack of hand-holding, and moments of frustration where you feel like you’ve been beating your head against a wall for hours, it would bomb spectacularly (not to mention the fact that the internet has made a lot of that thoroughly obsolete).

Return to Monkey Island is well aware of that, and it introduces smart quality-of-life improvements to iron out those kinks. The most fundamental of these is being able to play the game on one of two difficulties, one of which lowers the frequency of puzzles while also making them less challenging. Then there’s the hint book, which will dole out, well, hints that are just vague enough so as not to spell out everything you need to do at any given time, while also being genuinely helpful. These hints are presented to you one after the other- so if you feel that the hint you’re currently looking at is enough to prod you in the right direction, you can choose not to ask for any further help. Of course, for those who want no help whatsoever, the hint book is something that can be ignored entirely. 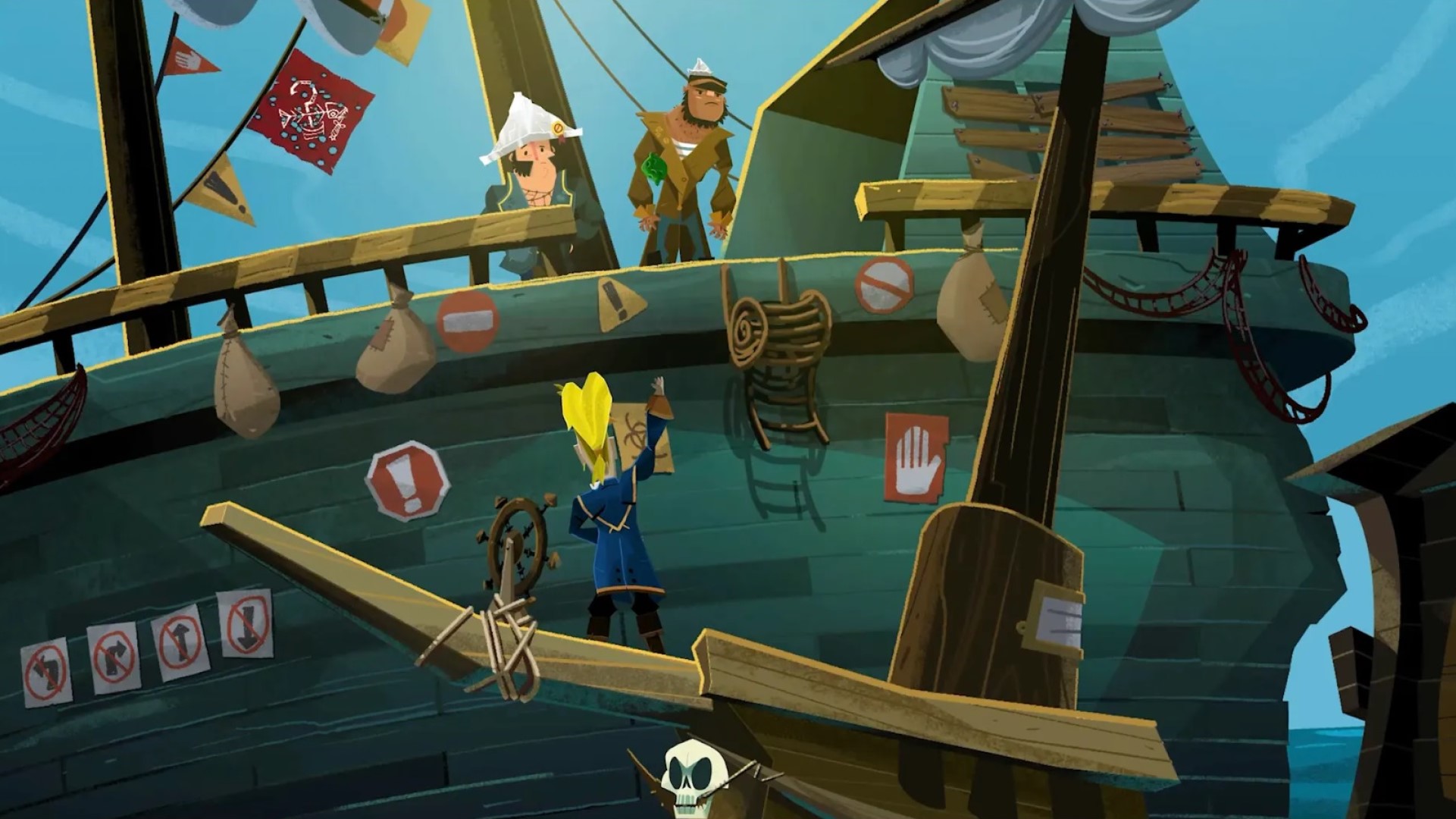 "Return to Monkey Island’s puzzles are clever and challenging, and they mingle with the game’s humour, writing, and storytelling in consistently excellent ways."

At any time, you can access a to-do list in your inventory, which handily and succinctly lists out your current objectives- and given just how many objectives you’re juggling at any given time more often than not in these games, being able to keep track of them in a simple and effective manner is a huge boost. Finally, the controls, too, have been suitably modernized, and feel organic and easy to use for the most part. Playing on the Switch, I did find using button inputs a little unwieldy for my taste at times- but this is a point-and-click adventure game, of course, and the Switch has a touch screen, so there’s an easy solution to the problem right there that Return to Monkey Island obviously makes use of.

The meat and potatoes of the gameplay experience, as you’d expect, centers entirely around solving puzzles- which takes many forms, from figuring out what items you need, where and how to get them, which of them to combine together, where and when to use them, and often, what order to use them in. As you’d expect, the quality of the puzzles themselves is top-notch. Even with all of the new helpful additions mentioned above, Return to Monkey Island’s puzzles are clever and challenging, and they mingle with the game’s humour, writing, and storytelling in consistently excellent ways. Finally solving a devilishly tricky puzzle remains as immensely satisfying as ever as well. Some puzzle types go get repeated more often than I’d like, and at times there’s a bit too much backtracking involved, but these are minor issues in the grand scheme of things.

And of course, alongside those puzzles, the heart and soul of any Monkey Island game is the story and the way it is told- which is another area where Return to Monkey Island is a rousing success. It serves as a sequel to Monkey Island 2: LeChuck’s Revenge, and at its core, it very much plays to the years-long obsession series fans have had over its ambiguous ending and the fabled Secret of Monkey Island, but it also doesn’t retcon games that released afterward. The way it structures its story to do those things and how it makes those two seemingly unmatchable puzzle pieces fit together is consistently impressive.

The writing, meanwhile, is as sharp as a razor’s edge- which is how you know that this is a proper Monkey Island game at its core. The self-referential nostalgia, the chuckle-worthy and heartwarming interactions between series mainstay characters, the laugh-out-loud jokes, the increasingly absurd twists and turns- all of it is pulled off immaculately. Getting humour right is no easy task- it’s an incredibly subjective thing, and stories across all media have fallen flat on their face more than a few times in their attempt to do so. Return to Monkey Island, however, goes about it with a confident ease- not unlike its predecessors. 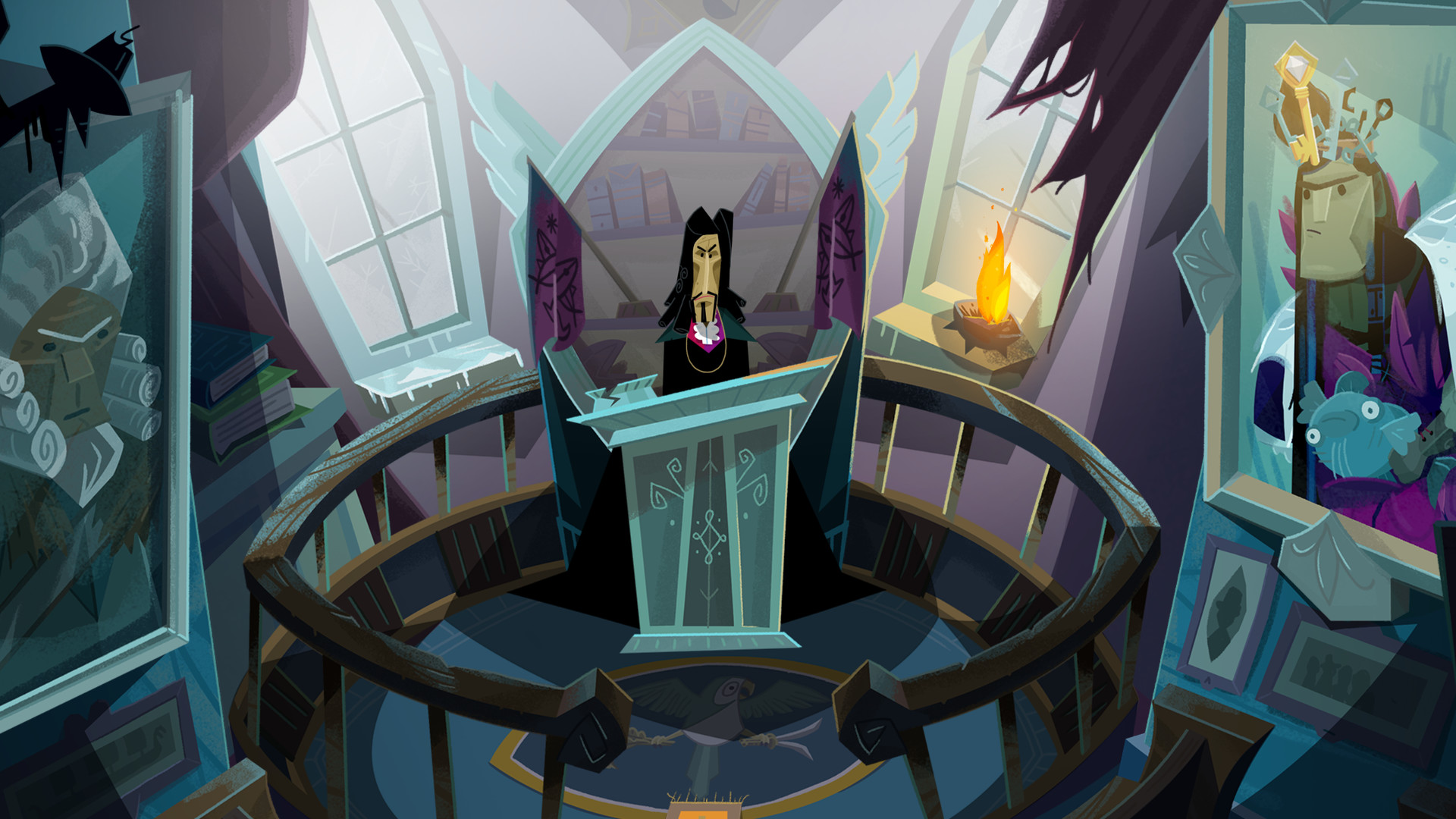 "Getting humour right is no easy task- it’s an incredibly subjective thing, and stories across all media have fallen flat on their face more than a few times in their attempt to do so. Return to Monkey Island, however, goes about it with a confident ease."

The game’s art style bears mentioning as well. Unfortunately, it’s been something of a topic of controversy in the lead-up to Return’s launch, and not everybody has reacted to the new look kindly, given how radically different it looks from the older games. But it works. This is a gorgeous game with a vibrant, colourful, and eye-popping aesthetic, and everything from the detailed environments to the characters and how they animate to even the items in your inventory are beautiful to look at, and – much like the rest of the game – brimming with charm and personality.

Given how easy it was for Return to Monkey Island to go disastrously wrong, it would very honestly be tempting to call it nothing short of a miracle that it is as amazing as it is- but honestly, that would be doing a disservice to Ron Gilbert and the team he’s assembled, and the incredible work and passion they’ve put on display here. They have all come together to deliver what mostly felt truly impossible at this point in time: a true, new, modern Monkey Island game, one that is so convincing at recreating the heights of the series’ heyday, it feels like that heyday never ended.

Some puzzle repetition; Backtracking can be occasionally annoying.

Final Verdict:
AMAZING
Return to Monkey Island is well worth the wait. This is a quest for booty you don't want to miss.
A copy of this game was purchased by author for review purposes. Click here to know more about our Reviews Policy.