Blacklight: Tango Down is a first person shooter that is set in the near future.  The Blacklight Team is sent in to attack The Order’s headquarters to find the missing Colonel Klein and his Blacklight team in the city of Balik.  Balik, which is covered in Russian signs and in game advertisements, has broken out in war after the rebel group ‘The Order’ assassinated the president and presumably captured Colonel Klein and his team. Once your team arrives to get the job done, command informs you that civilians have been infected with an unknown virus, causing them to attack both The Order and the Blacklight Tango team.

The game is mainly based around its multiplayer.  There are four missions that can be played by yourself or co-op with three other people.  They are fun missions but nothing really super amazing about them.  Your basic kill spawning enemies while you occasionally hack a terminal to progress through the mission.  You can also gain experience to level up during these missions. 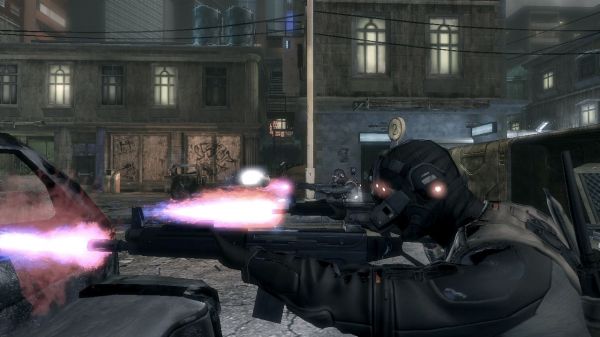 Multiplayer in Blacklight: Tango Down is really where the fun is.  Most people are probably saying to themselves, do we really need another FPS.  The answer is yes when it comes to Blacklight.  First off this is a downloadable arcade game that you can purchase for $15.00 on Xbox Live, Playstation 3 or the PC.  It is hard to tell this is a downloadable arcade game at times with the graphics being so good.  The mechanics of the gameplay are very familiar and easy to jump right into.  Everything flows very smoothly with enemies only taking a few bullets to take them down online.

The customization in the multiplayer is nearly endless.  As you rank up you will gain new weapons, weapon parts, scopes and some of the scopes are rather ‘near future’ looking which is cool.  You can unlock grips, armor, armor camo and each weapon will let you put a custom tag on it.  These tags are little trinkets that hang off the side of your weapon, but are not just for show.  As you level up you will unlock tags that when equipped to a weapons can either give you more health, more damage or more speed.  The customization as you level up keeps going with 100 tags that you can unlock and much more. 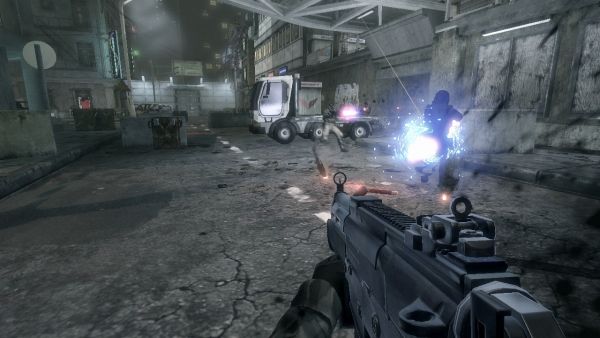 One of the biggest highlights about the game in my opinion is that this is a straight forward first person shooter, with no added perks, vehicles or killstreak rewards, just gun fights.  It is a nice change of pace from todays common shooters with out any over powered weapons.  At a low level you will have a slight disadvantage to higher level player as they will have more efficient ways of killing you and staying alive longer, but that is all the more reason to get to playing and rank up as quick as you can.  You can also rank up in the single player/co-op missions as well if you get discouraged playing online as a low level.  A down side of the game is that there is no party system to play with your friends although if you invite them into a lobby, odds are they will be on your team.. strange and worthy of an update.

Blacklight: Tango Down brings even more longevity to the game with a ton of different online modes to keep you busy or just find you favorite one and stick to it.  Here are your choices when it comes to multiplayer modes:

Deathmatch – Free for All

Retrieval – Each team defends their own data canister.  Your objective is to steal the enemy canister and take it to your base.  You can’t score though if your teams canister is in the hands of the enemy.  Capture the Flag type game mode.

Detonate – A neutral bomb in the center of the map must be obtained by your team and the planted only to then defend it until it goes off.

Domination – Their are a number of control points that your team must capture.  You can either capture them by standing in their radius until it is controlled by your team or you can hack it which is like a quick time simon says style event.

Last Man Standing – Free for all with no respawns.

Overall the game is great especially considering the price of $15.  The only down side of the game is it takes a little while to get used to how to customize you loadouts and such.  Some games can rarely be laggy, but that usually only lasts for a moment because the game then host migrates which is again above and beyond as far as arcade games go.  Blacklight: Tango Down also seems like it would be likely to have DLC in the future depending on how well it does but as far as right now this game is kind of an under the radar killer game that you should check out, especially if you are an FPS fan.  Worth the buy yes.  Don’t believe me; play the timed trial which lets you play anything in the game for 60 minutes.

Amazing graphics and mechanics for an acrcade game and the price is a steal. Plus the future setting really sets it apart from other first person shooters.

No party system to team up and play with friends. Initially confusing when it comes to the customizing and some game can be laggy until host migration takes place.

Final Verdict:
EDITOR’S CHOICE
The game is great especially considering the price of $15. The only down side of the game is it takes a little while to get used to how to customize you loadouts and such.
A copy of this game was provided by Developer/Publisher/Distributor/PR Agency for review purposes. Click here to know more about our Reviews Policy.