If you’re a fan of racing games of any kind, then you’ll be interested to know about Ride 3. The game comes with 230 different motorcycles and 30 tracks, so you’ll never be left wanting for any kind of  variety. You will also be able to customize your vehicles in many ways as there will more than 500 customizable parts to choose from.

To learn more about the game’s development, Gamingbolt reached out to the developers with some questions and they provided the following answers. 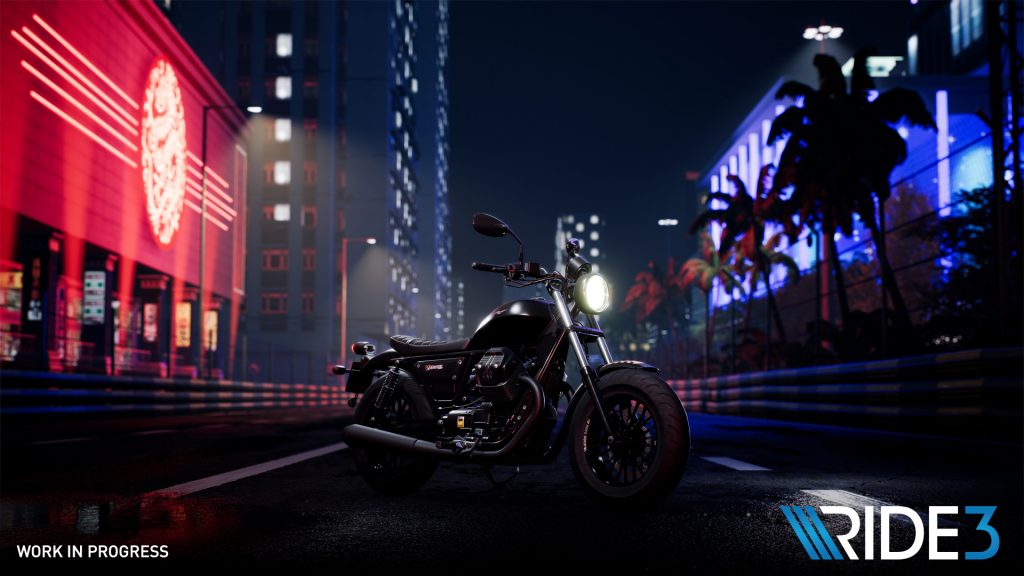 "Too many games mix old and new, vehicles made with different philosophies, with no difference, no highlight. Instead, every bike in Ride3 has been chosen with a purpose, and we’d like to make it evident."

We’ve learnt that the game’s career mode will deliver stories about bike categories, manufacturers, and more. Can you elaborate on how exactly this works?

The idea is that the career mode will revolve around different “volumes”. These volumes mimic actual books, or maybe magazines, like those that bike petrolheads crave. You’ll unlock them, throughout game progression, and you’ll open it, finding challenges and races bound by common themes, but also a proper setting for them in the form of a brief but informative description. This, without being a boring school lesson, goes way beyond the usual “take a bike/car and win”. It could be “the best sports bike of the ‘80s” or “the history of Ducati”, but there’s a lot to learn and play with.

What made you go with such a unique approach to a career mode in a racing game?

It’s the natural evolution of the previous Ride, just pushed a step or two further. It’s a game for motorbike fans, so we decided to add context, perspective, and allow them to play with these ideas. Too many games mix old and new, vehicles made with different philosophies, with no difference, no highlight. Instead, every bike in Ride3 has been chosen with a purpose, and we’d like to make it evident.

What are some of the customization possibilities we can expect to see in the game?

Ride2 was a record-setting title for customization, but Ride3 goes well beyond it –  and then some more. We have performance-only customizations, that affect the engine, or the transmission. Than we have others that affect both performance and visuals, like changing the exhaust, disc brakes and calipers, rims, tires. There are thousands of parts, and all of them are real and licensed from actual manufacturers. Then there’s another plethora of things that have pure cosmetic impact, like changing levers’ or other parts’ color. This sounds like a lot of options, but Ride3 adds some more extreme customizations on selected models, developed with real life custom builders: here the transformation can be complete, including gas tank shape, seat, tail. A recurring favorite is the option to covert some of the most performing sports bikes to racing models: it’s a non-reversible process that turns a street-legal machine into a track day beast. And finally, we’re going to offer a livery editor, to create custom paintings for the bikes, allowing to share them online. It’s one of the big requests from the fans, that are eager to recreate historic styles or to create completely brand new ones.

It looks like achieving a sense of realism has been one of your top priorities with RIDE 3. How exactly did you work towards achieving this goal?

Realism has many meanings in a such complex game. We aim for realistic yet manageable physics and handling: we offer a series of helps you can gradually remove while you get familiar with the game.  Realistic – or better, real-  are the many of the circuits in the game, while for those that are fictional, we started from real locations, trying to capture their feeling and to create some interesting layouts, but following the spirit of the place.

Realistic are the AI riders, and the bikes they use challenging the player: we wanted to create believable shoulder to shoulder battles, and give context and background whenever possible.  It’s a big mechanism where all the cogs and gears have to smoothly work together, to keep the game thrilling and fun, while firmly anchored to reality.

What are some of the improvements that have been made to the AI?

We have worked to enhance the performance of the AI on each single track of the game, improving racing trajectory and brake/acceleration behaviors. At the same time we are giving the player the possibility to select the AI level thanks to a percentage bar so to make easier for the player to find a level that suit their skills. Last but not least, we have worked a lot on the “detection” skills of the opponents (i.e. the perception they have of the player and of the other riders), so to make races more realistic and fun to play.

What made you decide to include a day/night system for the first time?

It’s been one of the most frequent requests from the fans, and some tracks just look gorgeous at night. Also, there’s a very different challenge in this, you have to learn again corner by corner to properly race at night, so it’s a natural addition to the series. 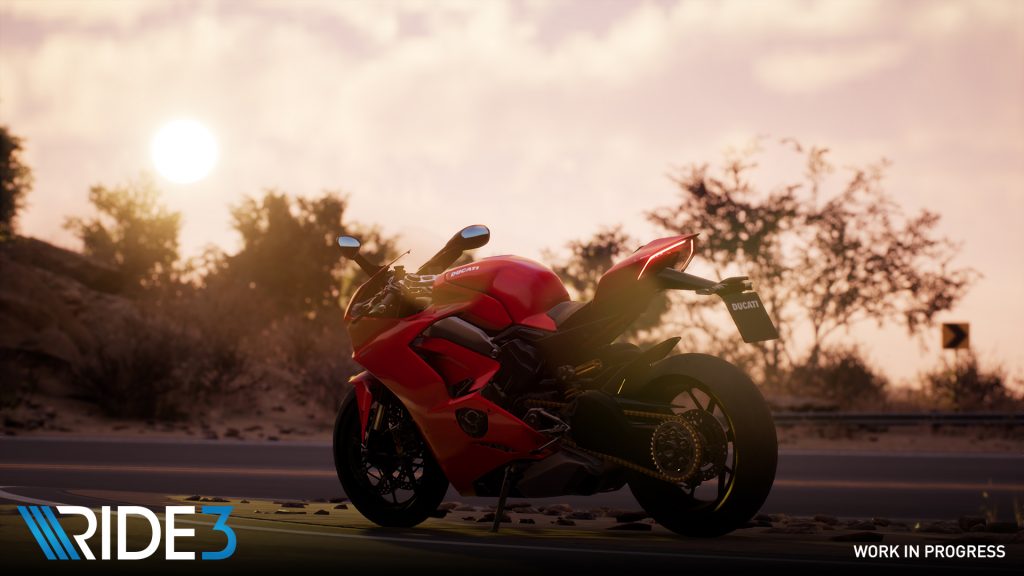 "The goals of the physics system are quite ambitious: we want to represent widely different bikes, from small displacement two strokes to big and powerful modern superbikes, and from different eras, when bikes performed in very different way"

With over 230 bikes, how have you worked to ensure that each of them remain unique?

It all begins with a perfect 3D model, sometimes it’s very hard to find a rare model, or a racing bike, and to be able to take all the needed pictures of it (easily hundreds) or to record its sound, but it’s absolutely needed to capture the visuals and the audio. Then we insert the real data (mass, torque, gear ratios and some other dozens of parameters) in our physics engine: quite often the results are good from the beginning, so we can reproduce the dynamic performance of the bike. A lot of work then goes into the test riding, to ensure that all works fine, that the performance customization applies correctly, and many other things. There are no shortcuts, there’s a ton of work to implement every detail: does the top speed match? Do the braking lights work? (and everything in between).

What can you tell us about the improved collision system?

We have already spoken about realism, and we think that the management of in-race collisions is essential to offer the players a good and fair race. Details like this are very important, especially during online races.

What exactly does the new physics simulation mean in terms of gameplay?

The goals of the physics system are quite ambitious: we want to represent widely different bikes, from small displacement two strokes to big and powerful modern superbikes, and from different eras, when bikes performed in very different ways. We have electric bikes, Supermoto, cafè racers, enduro bikes, so we have to be quite flexible. We can make no assumption, and keep the system generic and rooted in real physics. But then we add a layer of riding helps that are meant for newcomers, or returning players that don’t always want a brutally realistic challenge. These helps interact with the physics, trying not to add impossible forces or granting superior powers to the player, but anticipating or smoothing reactions, something that makes the difference from a fall to a save. There’s a lot going on, barely visible to the player, but the key ideas are always “realistic”, “deep”, and “fun”.

What’s next for Milestone and for the RIDE series?

We want to keep improving as a publisher and our goal is to make our key franchises better and better, year after year, and Ride is definitely among those.
Brainstorming on the next chapter of Ride have already started, but right now the whole team is focused on closing Ride 3 in the best way possible, to make it the great game we want it to be.

We have something up our sleeves, but it’s not the time to talk about this yet.

We have something up our sleeves for PS4 Pro too, but it’s not the time to talk about this yet. 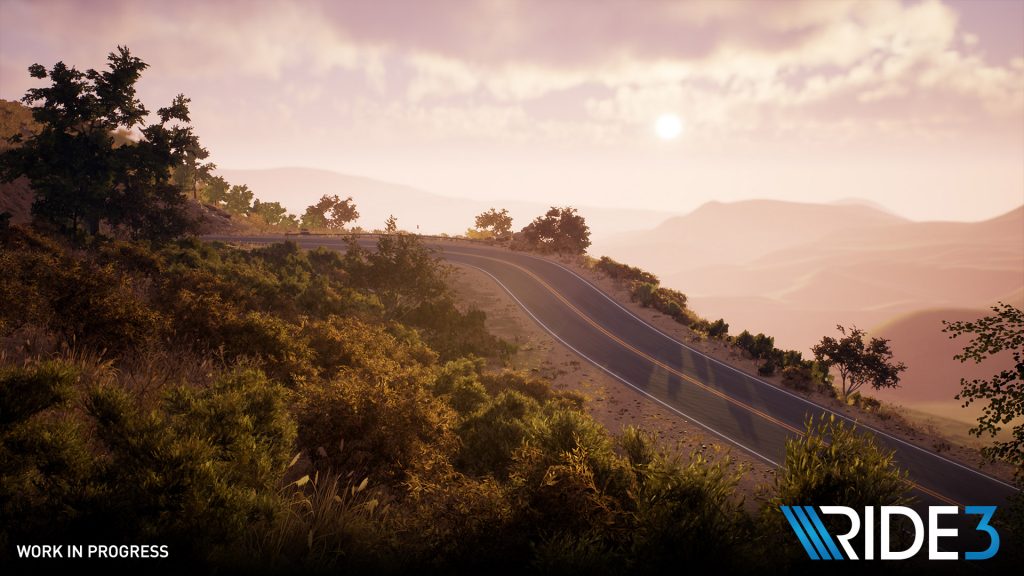 "There’s a lot of curiosity, the mid-generation consoles have heated expectations, sure we’ll have mandatory 4K HDR, easier to achieve 60fps with more power available, but also what are Microsoft and Sony going to do about VR?"

It’s an amazing machine, for sure. Modern titles rely on GPU power but also need a lot of CPU power, and memory bandwidth as well, as the two increase. That said, Xbox One X improves on all of these areas, and more, so we can achieve much better visuals, but we have to strike a good balance of resources use, so we can at the same time increase resolution, quality of 3D models at mid and far distances, quality of animations and visual effects (post-process ones).  The result is crisper, more vibrant, and gorgeous in HDR.

We’re aiming to 1080p (so full HD) at 30fps. Ride 3 has rich environments, very complex bikes in terms of rendering (even AI riders can and will customize their bikes!) and so 30fps is a good and solid point.

Unfortunately, not. We love the platform, we’ve made other titles for it, like the recent MotoGP18, but Ride3 is bigger in terms of data storage, heavier for graphics, and we didn’t want to compromise on some details to run on Switch.

There’s a lot of curiosity, the mid-generation consoles have heated expectations, sure we’ll have mandatory 4K HDR, easier to achieve 60fps with more power available, but also what are Microsoft and Sony going to do about VR? And it’s not only about the hardware, but also cross-platform play, new ways to share content and experiences: the trends are already evident but how will they take the challenge? Even timing will be more important then ever, and first-wave exclusives too.  It’s going to be a fantastic Ride.