Riders Republic proves that the open-ended racing format can still work, while simultaneously reminding us of how it can come up short.

Just when the typical open-world format has really started to get stale for some, Riders Republic has come along to demonstrate why it still needs to exist. When done right, open-world racing can offer addicting loops made up of fun events that feed into unlockables and upgrades that feed back into said events and so on. It might not be everybody’s cup of tea these days, as the format has been beaten to death over the last decade or so, but there is no question that the developer has mastered it with Riders Republic – at least in the macro sense. Upon closer inspection, the game does have a few bumps in the road that still allow other, more narrowly-focused racers to leave it in the dust in some ways. Still, if you like your racers vast, varied, and a bit silly, Riders Republic might just be up your alley.

After a rather lengthy series of introductory races where the game shepherds you through the basics, and beats you over the head with its presentation, it does take the training wheels off and pretty much lets you go wherever you want, however you want. You want to ride a snowmobile in a skate park bowl? Go for it. Why not? The variety here is a fun hook that Riders Republic heavily leans on to great effect. Most events at first focus on a single mode – whether it be mountain biking, snowboarding, wingsuits, skiing, it’s all here and most of it all becomes available within the first few hours of playing. All of the different modes feel distinct enough and do force you to approach them with slightly different mindsets, but as you find yourself getting tired of racking up points on grid rails in snowy mountains, you can effortlessly switch over to a biking race against over 50 other players down a treacherous mountain path. The varied locals and terrain types complement the different events nicely.

"Upon closer inspection, the game does have a few bumps in the road that still allow other, more narrowly-focused racers to leave it in the dust in some ways. Still, if you like your racers vast, varied, and a bit silly, Riders Republic might just be up your alley."

You can also experience everything at your leisure in the “zen” mode where your progression is not affected and you can just mess around. Normally this is a mode I would probably ignore but here it’s a worthy distraction and pretty helpful when you’re getting used to things. Where the variety shines brightest though is in the more ridiculous vehicles like the rocket powered wingsuits and rocket sleds that can apparently travel across rocky deserts, and the events that switch between multiple modes of racing in real time. These events don’t make a lot of sense, but they do realize the potential of Riders Republic in a big way – and effectively make the game stand out.

As you might expect, there is a bit of a tradeoff here. The game’s remarkable diversity does come at the cost of some depth. It stops short of ever feeling too arcadey to be challenging, but the simplicity of most events does mean that switching around to different modes will eventually become more of a necessity to keep things interesting than an organic leisurely exploration of the game’s many ideas. Now, you can change a few options around and even alter the playstyle to give you a bit more control over the racing itself, but more control over the same handful of superficial nuances doesn’t go as far as I would have liked with keeping things challenging. That’s not to say there aren’t challenges to be found in Riders Republic, but once you’ve mastered each of the game’s devices, which frankly doesn’t take very long at all, you’ll inevitably start to bump your head on their relatively low ceilings. The game seems totally fine with paying this price though, and for the sheer number of things there are to do, and how fun they can be, I wouldn’t call it a bad deal overall. Riders Republic clearly isn’t interested in being a particularly technical racer, nor is it about mastering some sort of huge learning curve. It’s about dressing up as a unicorn, joining up with equally ridiculously-dressed people online, and having some light-hearted racing fun.

And for that, it’s impossible to not admire it. Of course, with a racer that is less focused on the technical aspects, you will run the risk of running face first into some issues. Depending on the event, it can be hard to tell if certain rock formations are obstacles or can double as ramps until it’s too late for it to matter. It can also be tough to find the end of a combo spin where you level back out if you haven’t perfectly memorized that particular animation. And the score-focused trick events can quickly go from being a breeze with the game guiding you from one grind rail to another – to being very unforgiving when you try to grind on something that looks grindable, but apparently isn’t. Lacking nuance and being focused on it are both fine in my book, but inexplicably going back and forth between those two philosophies is not a fun road to go down and sort of flies in the face of the fun light-hearted elevator pitch of the game. I also found it a bit odd that they included a rewinding mechanic that allows you to backtrack if you screw up, given that the races include other people online and therefore can’t rewind them. That makes the feature a risky move that can easily do more harm than good. Oftentimes, you’re probably better off just course-correcting in real-time.

Warts and all, the game runs great on the PS5. This is expected given the fairly mediocre graphics and conservative number of environmental effects, but even still, I have no major hitches or frame drops to report and that matters most in a game like this. 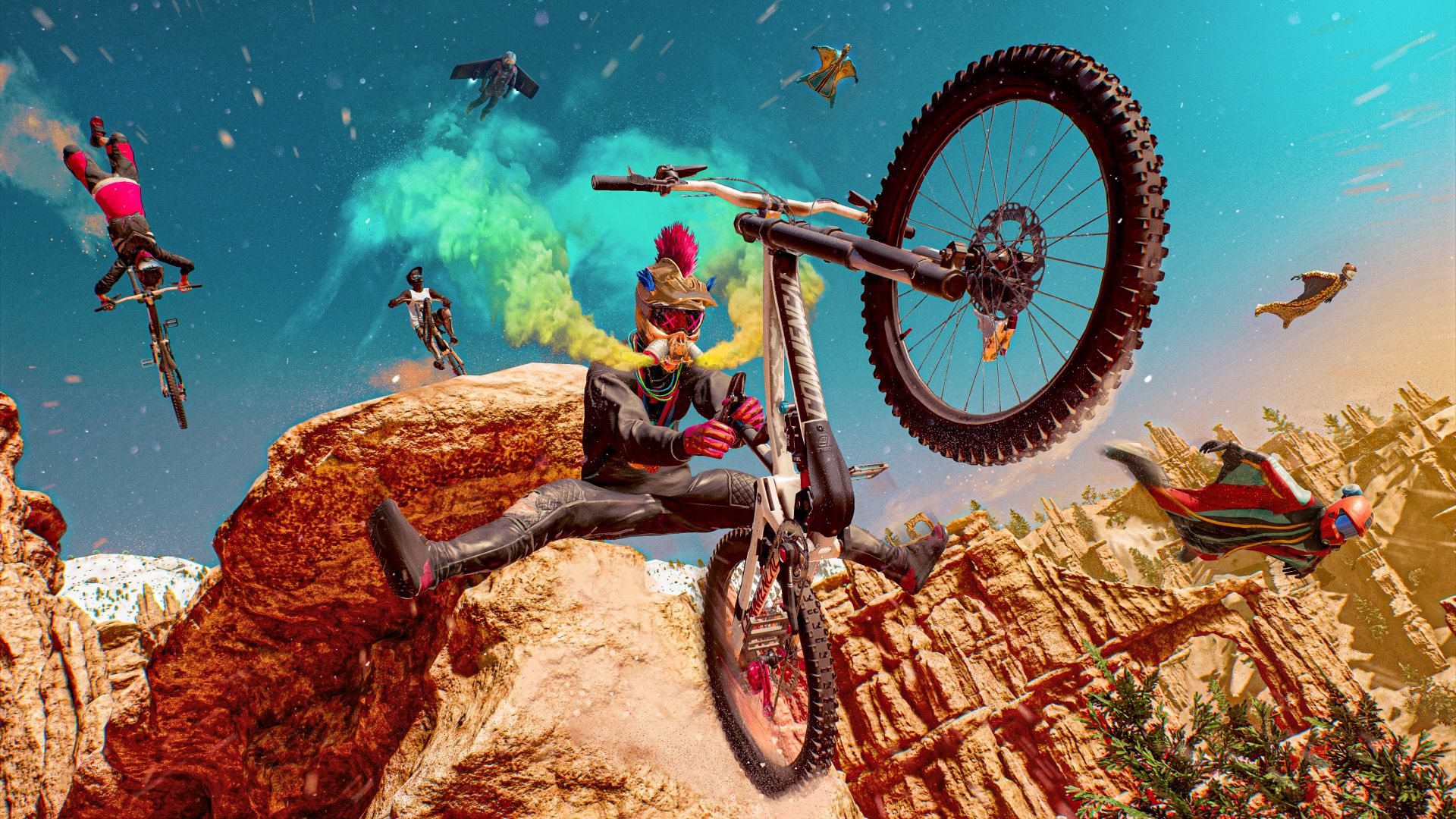 "The attitude of the gameplay and overall thrust of what it wants to be is an admirable attempt at a fun, social, arcadey open world racing experience with plenty to see and do."

Customization is also an area where you would correctly expect this game to be paying mind. Everything from the character’s face, hair, clothes, masks, and more are up to you to customize. It’s not as deep as a typical RPG might be, but for a game primarily about racing, it’s not a bad selection of options. Much of the better costumes and other items are clearly designed to interest you in buying the in-game currency with real money, but it’s not too bad. If you play the game as much as it’s designed to be played, you’ll find yourself able to afford most things within a reasonable amount of time. Especially if you go for the three sub-challenges each event has.

The attitude of the gameplay and overall thrust of what it wants to be is an admirable attempt at a fun, social, arcadey open world racing experience with plenty to see and do. It has its fair share of stumbling blocks and they are mostly in areas you would expect like short-sighted design choices and gameplay that can feel a bit shallow once you’ve learned the ropes. But just as notably, it excels in the exact areas it aims to with plenty of customization, a massive online world, and plenty of functionality to back it up like cross platform play and letting you create a group of up to five friends so you can challenge each other in the game’s many different events. Overall, I don’t expect hardcore racing game aficionados to get a lot of satisfaction out of it, especially ones that don’t care much for social features and online functionality, but for those who do want that and don’t mind refinement being secondary, it’s a solid choice.

Mediocre graphics; Laughable characters; Racing itself can get stale a bit too soon.

Final Verdict:
GOOD
What Riders Republic lacks in depth, it more than makes up for in variety.
A copy of this game was provided by Developer/Publisher/Distributor/PR Agency for review purposes. Click here to know more about our Reviews Policy.