Rise of Nightmares is the first game for the Xbox 360 Kinect that is rated Mature and happens to be the first horror game as well for the Kinect.  Sega has gone through with a lit of trouble to make this a very unique experience, creating a survival horror game that is all bases on your movements through the Kinect.  Whether it is walking, running, turning, picking weapons using them and more, it make for quite an experience when you actually have to physically run away from enemies.  The enemies alone in the game are unique but seem to be inspired for all past horror games and it can seem kind of corny at moments while other parts are pretty damn scary.

With Rise of Nightmares, players that are only into the more hardcore game now have a reason to get up off the couch and use their Kinect or purchase one for that matter. You play as an alcoholic husband named Josh who’s traveling through Eastern Europe with his pregnant wife. Josh’s wife Kate, is kidnapped while their train derails outside the medieval castle/sanctuary inhabited by a mad scientist names Victor, along with his horrific creations you will have to fend off. You will need fight off these creatures by any means whether kicking them, slashing them with a crow bar or throwing explosive viles, among many other means of weaponry to save your wife. 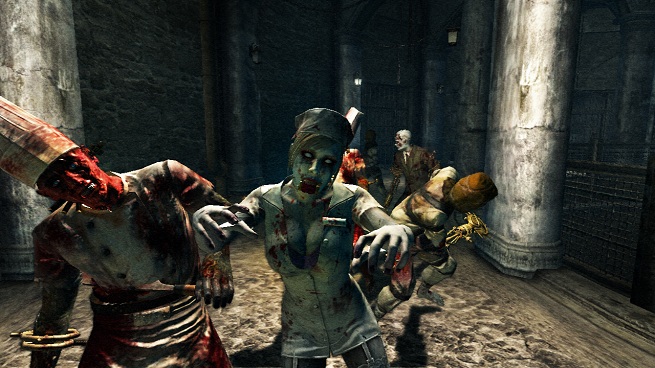 There are plenty of Zombie Maids to kill throughout the game.

The mechanics of the game are fairly simple where walking requires you to put your foot forward and lean which can get annoying after a while.  Other than that all the games mechanics are easy, where turning left or right just requires you to slightly turn your body left or right which can also be done while running or walking, so you do not necessarily have to stop to change the direction you are moving it.  You can even move backwards by lean one of your feet back.  Picking up items are easy as you just hold your hand out at the item until the circular bar quickly fills up and you then have it.  There are a range of different weapons you can use, that can be found or dropped off enemies, but all items do not last forever and you can only hold one weapon at a time.  To kick an enemy is quite literal as well as ducking, jumping, dodging and running requires you to run in place, which sound easy but can be hard than you think.

In the game you would expect a real horror fest which unfortunately just is not quite up to par with other survival horror games.  The story of the game also does not exactly go so deep from what story there is in the game, but there are some very cool plot twists that try to make up for it.  When it comes to epic horror moments there are a few in the game but like I said it does not compare to other horror games in today’s age.  You also have to keep in mind that this is almost a test run to see how well a game in this genre can work with 100% Kinect controls.  The controls are pretty easy when you get the hang of them, but can still be slightly awkward at time.  I am afraid the real problem hear is using the control while you are in the heat of battle as this is when those easy controls become difficult while you are trying to survive.  Also certain weapons are more effective against certain types of walking undead monsters, but not do a degree that you really need to worry about… any weapon will efficiently kill an enemy. 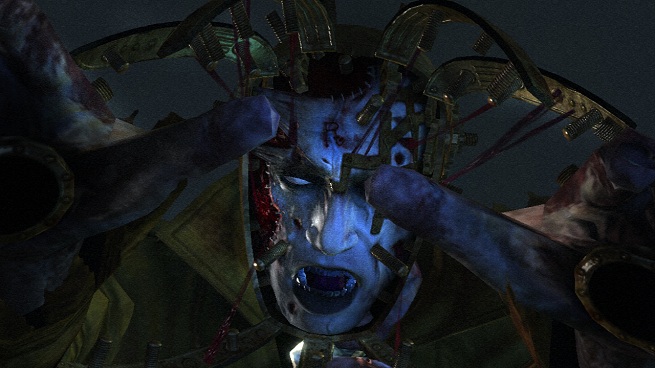 One nasty looking creation from the mad Dr. Victor.

There are a few different types of enemies such as Spitting Zombies (covering your screen with puke), Singing Zombies (you have to cover your ears to avoid damage), Exploding Zombies, and a variety of normal zombies that just need to be hacked away at.  Boss fight are a mixture of quicktime events and more hacking, which are not too difficult.  You are also not limited to hack/slash weapons as you you can obtain a chainsaw, a shotgun, electrifying weapons and more.  The being able to go where ever you want whenever you want which can be kind of a pain in ass at times.  Luckily, holding your right hand up will automatically put you on a rail system, walking you to you destination and although very handy, it will have you walking past areas that might have some cool weapons among others areas with things.

Rise of Nightmares is not a bad game, it is just that it can get boring fairly quick, which is a shame considering the plot twists in it later on.  The game is something you would definitely want to try out especially if you are looking for something different in the Kinect, but I have to look at this as a preview of what is to come from mature games in the future.  With some kinks worked out in the game, it could have been an amazing experience.  Unfortunately I feel that SEGA and Rise of Nightmares got the short end of the stick just because of the game being the first of its kind for the Kinect.  The game is hard to say whether it is a bad game or a good step forward in having mature games for the Kinect.  There is only one true way to understand what the game is like and it is to try if for yourself, so if you own a Kinect, I suggest renting the game while taking our score into consideration.

First mature game for the Xbox 360 Kinect, plot twists and the choice to use a rail system or wonder off on your own.

Not as horrifying as it could have been, controls in the end are difficult to master in the heat of battle.

Final Verdict:
FAIR
You will have to hack, slash, shoot, dodge, duck, run and find a way to save your wife in this giant castle filled with a mad mans zombies creations, all the time using the Xbox 360 Kinect only.
A copy of this game was provided by Developer/Publisher/Distributor/PR Agency for review purposes. Click here to know more about our Reviews Policy.