Rocket Knight Adventures is back and just as good as ever. In this updated version of RKA, many of you may remember from Sega Genesis, Sparkster has a new enemy that resembles something of Sonic and Knuckels.  The back story is that Spark returns to his home castle of Zephyrus to find it in shambles 15 years after the original game. Now he has to suit up in his jet pack in what seems like a much awaited battle against the wolf army. Judging by the sigh at the beginning of the introduction, when Sparkster is tending his farm, he not only wanted something to happen but was probably excited to grab the old blade and hit the road to Zephyrus. 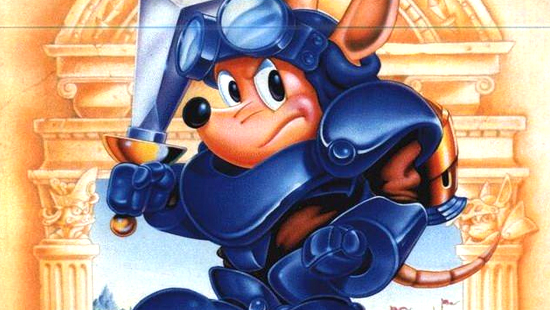 Initially I was into the game because I had played the original quite a bit, and not just in the past but more recently as well. In all of the years that I had owned it I had only seen the final credits one time, and it was not easy to get there. We stayed up all night playing the game over from the beginning time and time again waiting for the one lucky time we could get past the dreaded flying level through the city of flying pigs, which ironically coins the term, “We will beat the game, when pigs fly.”  The theme music set it off and I was instantly stoked to get in and launch myself at enemies.  Although this update seems like an easier version, I’m sure that after the demo levels the difficulty improves greatly.

It’s been a long time since we have gotten our hands on some older titles that have stayed true to the plat-former concept of the 32 bit consoles. Rocket Knight is on the right path for keeping that old school feeling with new updates. The full game is loaded full of challenging levels that you can play in arcade mode, which is playing like the game was designed, or you can just free play which lets you go to any level you have completed to just play or practice. If your like some of the gamers I know, you will love this feature if your trying to beat the game in under 10 minutes or something ridiculous to impress the all the ladies. 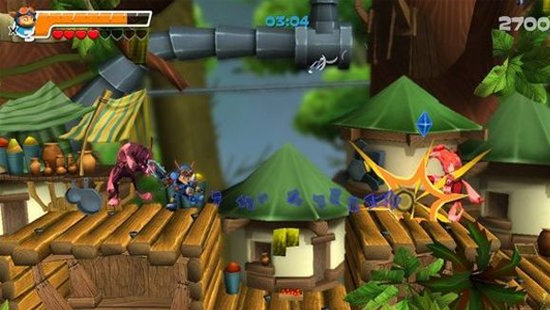 Rocket Knight Adventure’s, plays just like the original, there are only a few new add-ons that you would never know about unless you played the original. The ability to do the cyclone attack is new, as well as the rocket shot which is a ranged attack.  There is also levitation feature that allows Sparkster to jump and hold down jump to float for a second or two.

Sparkster is still always looking for his gems; they are essentially the rings from Sonic. Overall playing this was like playing the original, they throw you right into the same style first stage as the original and next into a flying level, but instead of fighting a giant sea dragon thing, you’re matched up against your un-named evil foe (or knuckles). This is basically an evil looking version of Sparkster but with red equipment. So once again it’s a battle of Red vs. Blue, which for some reason always reminded me of Coke vs. Pepsi. 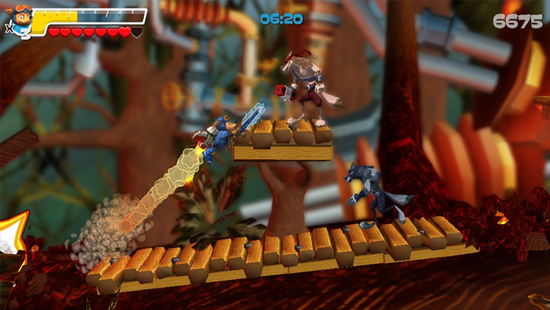 Check out this great new look!

The graphics are fifteen dollar worthy. I don’t personally have anything against cell shaded graphics, but I feel like it’s almost a way for designers to be lazy. I have played a lot of really bad cell shaded games, but Rocket pulls it off. The whole cartoon style relates to the old times and most indefinitely the key demographic for the game back in the 90’s.

I had a really good time playing this, and I’m sure if you’re a fan of the series than you will as well. So as far as it goes for old school Rocket Knight Adventure players, if you liked it then, you’ll love it now. Not to mention it’s so cheap, go ahead and pick this one up.