That takes a few missteps.

The original Rocketbirds from the developers of Ratloop Asia was a harrowing , albeit hilarious, 2D adventure-shooter-platformer that had the player take the role of a avian protagonist and storm the levels trying to hunt down the vile antagonist Putzki. Rocketbirds 2: Evolution revolves around the same dilemma as you quickly learn that Putzki wasn’t actually killed at the end of the last game. Oh, sorry — Spoiler.

What you get in essence of Rocketbirds 2 is the same old uniformed, sometimes cleverly plotted 2D maps like in the first game. The platforming within Rocketbirds 2 is a great addition and I believe it is a little more sophisticated than in the previous version. Every few panels, as the game sometimes moves screen by screen, you see a small text conversation about the troubles being caused by your character as it storms a great big facility reeking havoc along the way. Of course, the levels do change, and it introduces some fun situations such as shooting alarms to stop enemies, making your way through several waves of other enemy birds, and so on.

Although this game is a mindless platformer – twin sticks shooter, what story that is fed from time to time had me chuckle a few times. And I did die from laughter —  literally. Well, literally within the game. And that’s one of the things with this game: you will end up dying quite a bit. This isn’t a family-friendly shooter as it contains dark references, but essentially it’s sometimes just very hard in certain areas. I found myself doing some waves over and over before I was able to over come some of the harder areas the game had to offer. But that’s just me. Some players may find it too easy, some may find it harder than I did. 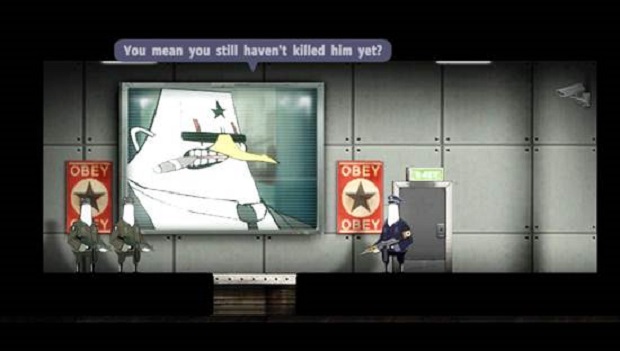 "Although this game is a mindless platformer – twin sticks shooter, what story that is fed from time to time had me chuckle a few times."

What’s cool about Rocketbirds 2 is the incredible weapons the game offers. No, this isn’t Call of Duty quality. But what are available tend to be very entertaining and very accurate. The militaristic bird-hero can wield two weapons at a time but can have a larger arsenal to switch out with. This twin sticks shooter style game has enemies from every angle, and finding out which weapon works best for you is essential to making it through the game properly. I often found the shotgun and assault rifles to be quite entertaining and very well balanced. There are also grenades and other smaller surprises along the way.

Enemies, sometimes  attack in overwhelming swarms, can shoot, throw grenades, carry other heavy weapon rifles and objects and can even come after you with melee. This is quite troubling when you are just one bird and a slew of enemies that sometimes have incredible amounts of health are just pummeling you from every angle. Luckily, there are checkpoints to be earned. But again, these checkpoints are sometimes in bad spots where more waves and even stronger enemies are just ready to pounce. Don’t get me wrong, it’s not awful and most of the time the checkpoints are pretty good. But overall, it’s a little tiresome to die so often.

What’s kind of a disappointment within the second game is the color scheme. Too often you’ll see dull grays, whites, and blacks with very few eye-pleasing colors in between. I enjoy colorful games, though I don’t expect a game such as Gears of War to be full of wonderfully bright colors. But when you have a game that prides itself on its wit, whim, and senseless humor, adding a few colors would have made it a bit more fun. 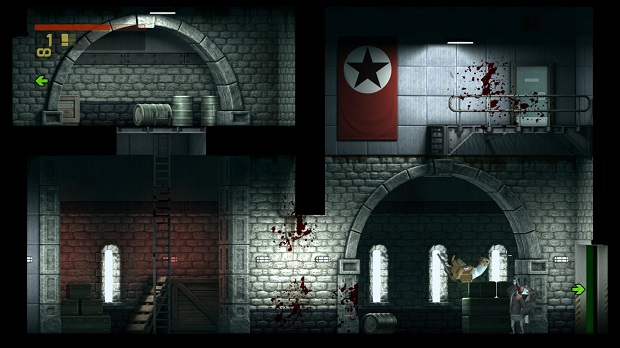 "This twin sticks shooter style game has enemies from every angle, and finding out which weapon works best for you is essential to making it through the game properly."

Now, this is an indie title so you don’t expect any great orchestra settings or lots of great music anywhere. But what Rocketbirds 2 does offer is great for a wartime feel; again, it should be funny but the music doesn’t quite match the writing. With that being said, the music is a great ambient noise for a sometimes crazily intense game.

Overall, I would definitely give Rocketbirds 2 a try, especially if you’ve been wanting to play a shooter-platformer lately. It gives you just the right amount of platforming with a great amount of shooting. The humor is where the game’s strength lies, but it falls short with the sometimes too hard shooting areas.

Checkpoints can be found in not so fun places, you are going to die a lot, platforming isn't quite original.

The game is a good experience for those looking to get a new platformer since they seem to be so few and far between. Just don't expect anything substantial besides the great humor surrounding this interesting world.

A copy of this game was provided by developer/publisher for review purposes. Click here to know more about our Reviews Policy.
Tagged With: ps4, psvita, Ratloop Asia, Rocketbirds 2: Evolution