Romance of the Three Kingdoms XIV offers a completely different brand of strategy, one rarely glimpsed at in the west before.

Strategy games using historical settings are nothing new, and turn based strategy games with historical flavors even less so. Yet the west has missed out on an extremely prolific chapter in the history of strategy games – Koei’s Romance of the Three Kingdoms series is a turn based strategy and tactics series, going back almost four decades now. It’s a rich, unbroken history, but one that the west has flat out not had the chance to experience much – for a confluence of reasons, Romance of the Three Kingdoms games have had few releases outside of Japan.

But the fourteenth (yes, fourteenth) game in the series is available now, and it’s come to the west, thankfully enough. I say thankfully, but that in and of itself should not be construed as an endorsement of quality, or stamp of approval. My appreciation for Romance of the Three Kingdoms 14 borders more on academic than anything else. Indeed, as a long time fan of strategy games, Romance of the Three Kingdoms left me feeling quite cold in a lot of ways.

The biggest stumble the game makes, in my opinion, is the interface. To be perfectly fair, strategy games have labyrinthine interfaces, that can be hard to adapt to the limited inputs consoles provide. However, in an era when we have seen games successfully make the jump to consoles with fine tuned interfaces designed to keep things quick and moving, Romance of the Three Kingdoms started life as a PS4 game, and was then ported to PC as well for the western release. This being a console first game means there is little excuse for the interface to be as bad as it is. 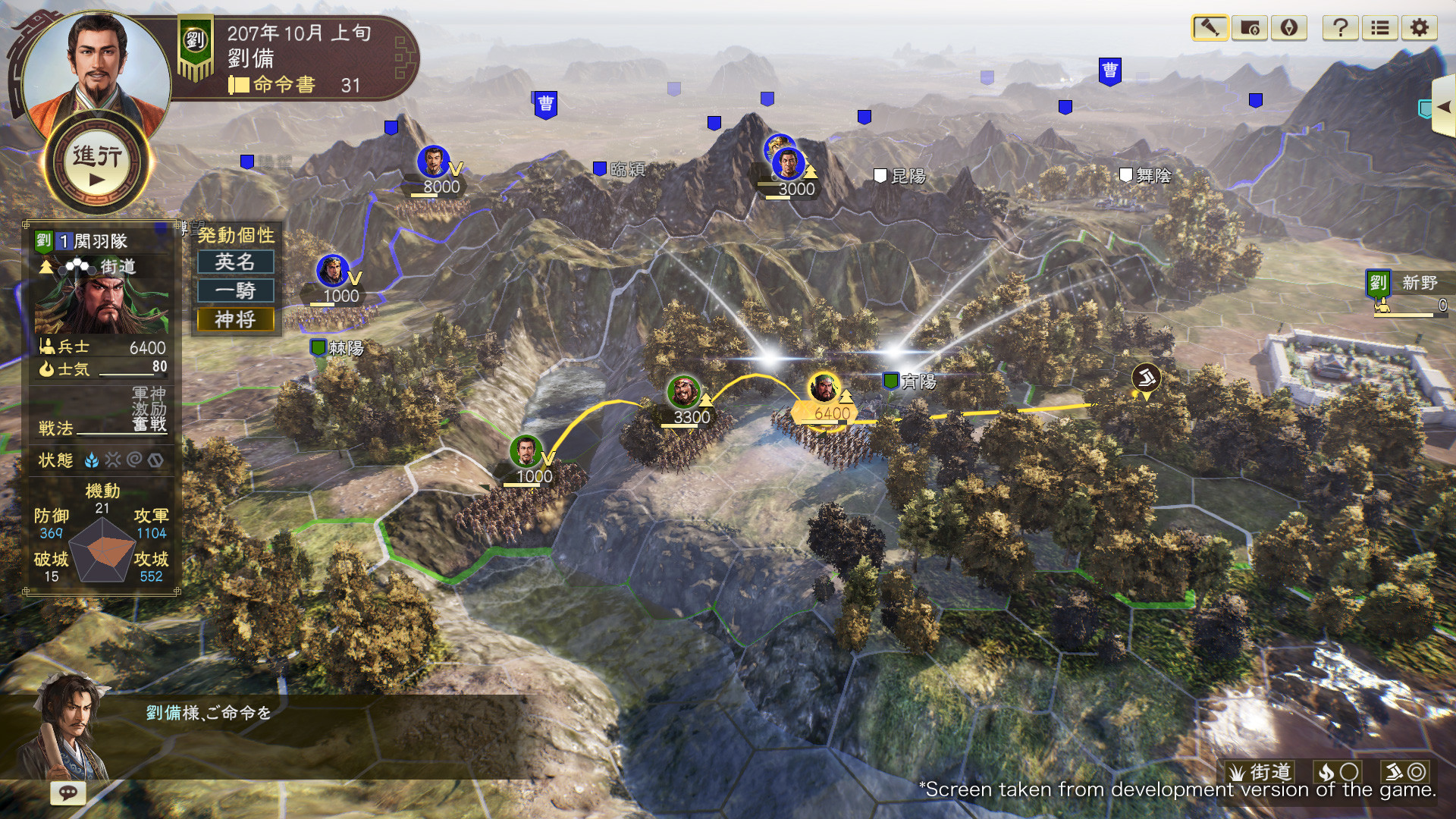 "There are menus and submenus, nestled within one another, mapped to all sorts of unintuitive button presses, and flagrantly disregarding some of the most basic rules of interface design."

And it’s pretty bad, honestly. There are menus and submenus, nestled within one another, mapped to all sorts of unintuitive button presses, and flagrantly disregarding some of the most basic rules of interface design (what is the option in the menu you have selected, the one highlighted in black, or the one in white? Have fun figuring that out, and hopefully you don’t wreck your military as you struggle with getting a handle on this extremely basic UI element). Even something as simple as the confirmation button can change from being Triangle and Square within the same action, just at two separate levels (and most actions in the game require you to confirm things at least twice, which means you better get used to remembering when to press which button to proceed).

There are menus upon menus, and controls that are bizarrely hard to come to grips with, but there is a method to the madness, to be very fair. Romance of the Three Kingdoms actually suffers from UI paradigms and concepts that have been slowly added to it over the 35 year history it has had, which means there are a lot of things it is doing that make total sense to those in the know – and no sense to those not. On the flip side, however, this means that once you do get used to the controls and interface, which can take hours, ultimately it’ll all make sense (either that, or you’ll have internalized its bizarre and perplexing lack of logic). Either way, however, the interface is less of a hang up the more you are used to it.

As frightening as the game’s interface can be – and it can look positively terrifying to the unacquainted newcomer – this game is actually extremely newcomer friendly, with a bunch of tutorials designed to help you come to terms with the game’s basic concept, mechanics, interface, layout, controls, and some fundamental strategies to keep your head above water as you try to unify China. Newcomers are absolutely going to find the tutorials invaluably helpful, and while these are nowhere near as good as Total War, they get the job done very well, and I have no complaints with them.

The actual strategy and tactics part of the game is an interesting paradox of feeling too deep, but not deep enough, often at the same time. Opening up, well, anything in the game will present you with screens and graphs and tables of components and elements for you to consider and ostensibly micromanage. It, again, can look terrifying (and is in line with the positively ghastly UI), but once you have figured out how to maximize the development and stability of your territory, things can become almost disappointingly automatic.

Now, to be very fair, this is a problem most strategy games suffer from (and it’s why my favorite part of any strategy game is the very beginning, where you don’t have much and have to build your way up. So the problem here isn’t unique to Romance of the Three Kingdoms as much as it is endemic to the whole genre – but if all the information and options the game throws at you made you think this one might be a bit different on that front, don’t hold your breath. 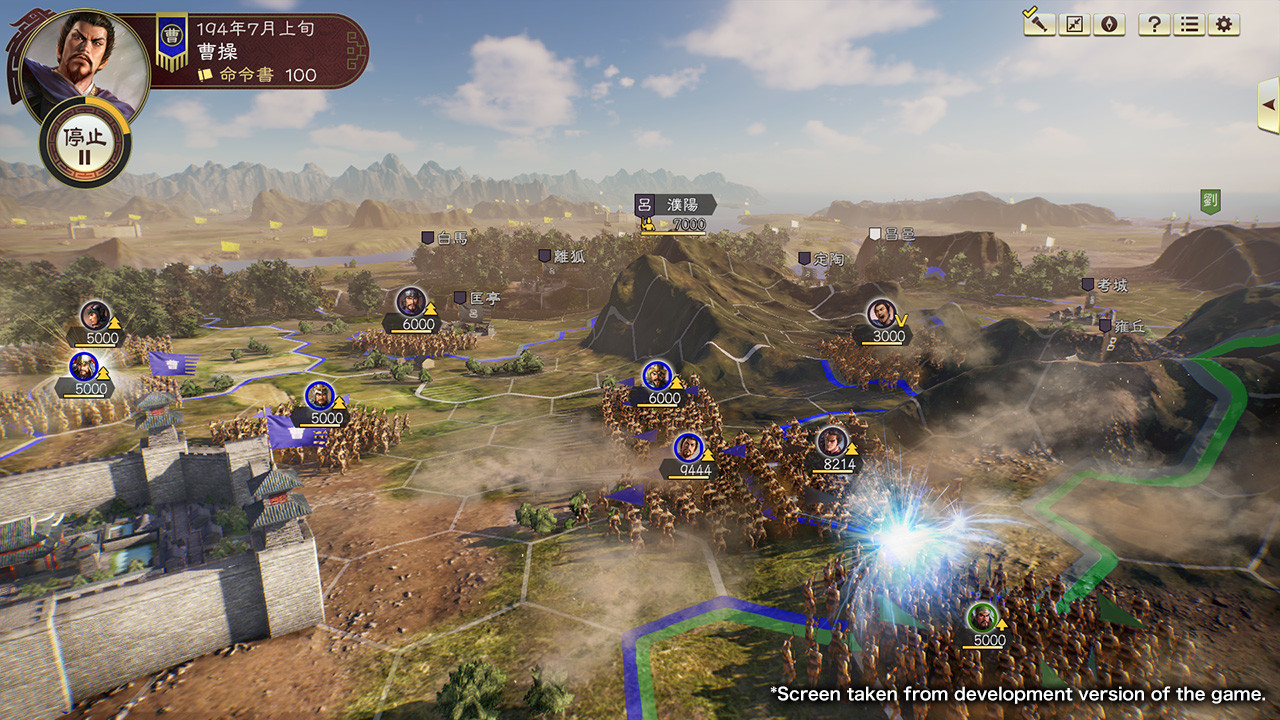 "Once things do click, you will find you have a ridiculous amount of extremely satisfying strategy content to make your way through."

For all my criticisms of the game’s ridiculously bad UI or controls, or even its strategy and tactics, once it all clicks together, it grabs you and doesn’t let go. The actual military side of things is remarkably well fleshed out and while the urban development and economic micromanagement parts of it all aren’t quite as satisfying as the military stuff, they at the very least help to keep things interesting and varied.

Once that happens, and things do click, you will find you have a ridiculous amount of extremely satisfying strategy content to make your way through. There are so many historical and fictitious scenarios for you to play through – once more, just looking at that list can be frightening. Fans of western strategy games, however, will probably be immensely disappointed that the game has no skirmish or random map mode, meaning you have to play through these pre-fabbed scenarios.

To the game’s credit, it does let you create your own custom characters, with their own abilities, family histories, tactics, and more. You can then use these characters as you wish across any campaign in the game, which means that theoretically, you can basically play a custom skirmish. I have to imagine this will find a lot of takers and fans especially in the modding community, but for those not too big on setting up a cavalcade of their own characters (and you will need to make quite a few of your own to truly be able to enjoy a “custom” game), do bear in mind that the pre-existing campaigns are all you get – there isn’t a multiplayer mode either.

In spite of all the shortcomings I have named, however, Romance of the Three Kingdoms 14 is worth it for hardcore fans of strategy games. Many of those will probably – hopefully – get this on PC, where a lot of its control and UI troubles will go away (or at least matter less). But regardless of how much you have to struggle with the controls and UI, under all of the clunkiness and bad habits picked up over 13 games and 35 years, you will find a surprisingly addictive strategy game unlike anything else on the market – if you can put up with it long enough to get to that stage.

The interface is galling; the controls make no sense whatsoever (at least at first); the game can feel cumbersome with the amount of options offered, and yet still feel quite shallow, at least in the non-military aspects; no skirmish or random map mode; no multiplayer mode.

Final Verdict:
GOOD
Under all of the clunkiness and bad habits picked up over 13 games and 35 years, you will find a surprisingly addictive strategy game unlike anything else on the market - if you can put up with it long enough to get to that stage.
A copy of this game was provided by Developer/Publisher/Distributor/PR Agency for review purposes. Click here to know more about our Reviews Policy.