While it’s no secret that the genre has started to roll more eyes than ever before in recent years, Epic Games and Iron Galaxy still insist that there is more blood to squeeze from the battle royale stone. With that, we have the free to play game Rumbleverse, which thrusts its players into an extremely familiar looking, sounding, and playing experience aimed directly at a large player base of gamers who might have found enjoyment in other iconic battle royale games like Fall Guys or Fortnite. The art style, the music, sound effects, and progression systems of Rumbleverse couldn’t feel more derivative in 2022, but it’s the somewhat less-traveled road of a melee combat focus that Rumbleverse bets the farm on to deliver the knockout punch it so clearly wants to.

"The art style, the music, sound effects, and progression systems of Rumbleverse couldn’t feel more derivative in 2022, but it’s the somewhat less-traveled road of a melee combat focus that Rumbleverse bets the farm on to deliver the knockout punch it so clearly wants to."

As noted, but cannot be stressed enough, Rumbleverse seems to intentionally replicate the look and feel of its countless counterparts’ ad nauseum. Character models, environmental objects, visual effects, music, sound, even the UI is strikingly similar to the games it’s currently trying to shepherd players from. Depending on the player this may or may not seem like a negative, as the number of times you have personally engaged with this style of game will be directly proportional to how much you feel it’s either fashionable or passé, but at this point I personally couldn’t shake the feeling that Rumbleverse reminds me of somebody showing up to a house party at 4am, long after everybody else has either passed out or gone home.

Hand-to-hand combat in a large Fortnite-style battle royale environment such as this might sound like a nice way to mix things up, and it can feel that way at times. Jumping into the mix and slamming others around while they do the same to you does produce some silly fun. And landing a perfectly-timed drop kick on an opponent that spent the last 5 minutes terrorizing you is undeniably satisfying. but without a way to take advantage of all of that space to attack enemies or accomplish much of anything else, the large battlefield mostly just dissolves into a series of disjointed pockets of mini battles where a few people are all bashing each other around until a victor emerges and moves on to the next micro-scuffle.

That cycle largely repeats itself until the last skirmish between whoever is left and the ultimate winner remains. As would only make sense, the final moments usually consist of the better players, but other than that, there is little making one fight feel different from any other one, what’s more, the ever-tightening circle of the arena – a mainstay characteristic of the battle royale genre – does almost nothing to change the dynamic of the match or inject much urgency into Rumbleverse‘s battles since players are already close to each other by virtue of the hand-to-hand combat. At most, the shrinking arena does eventually force some campers out of their hiding spots, but it still amounts to little more than an afterthought in a game where space and distance are so thoroughly squandered. Some environmental hazards or a way to close distances faster could have bridged that gap, but as it is, it rarely feels like there are more than three or four players to worry about at any given time, making the battle royale format feel unnecessary more often than not. 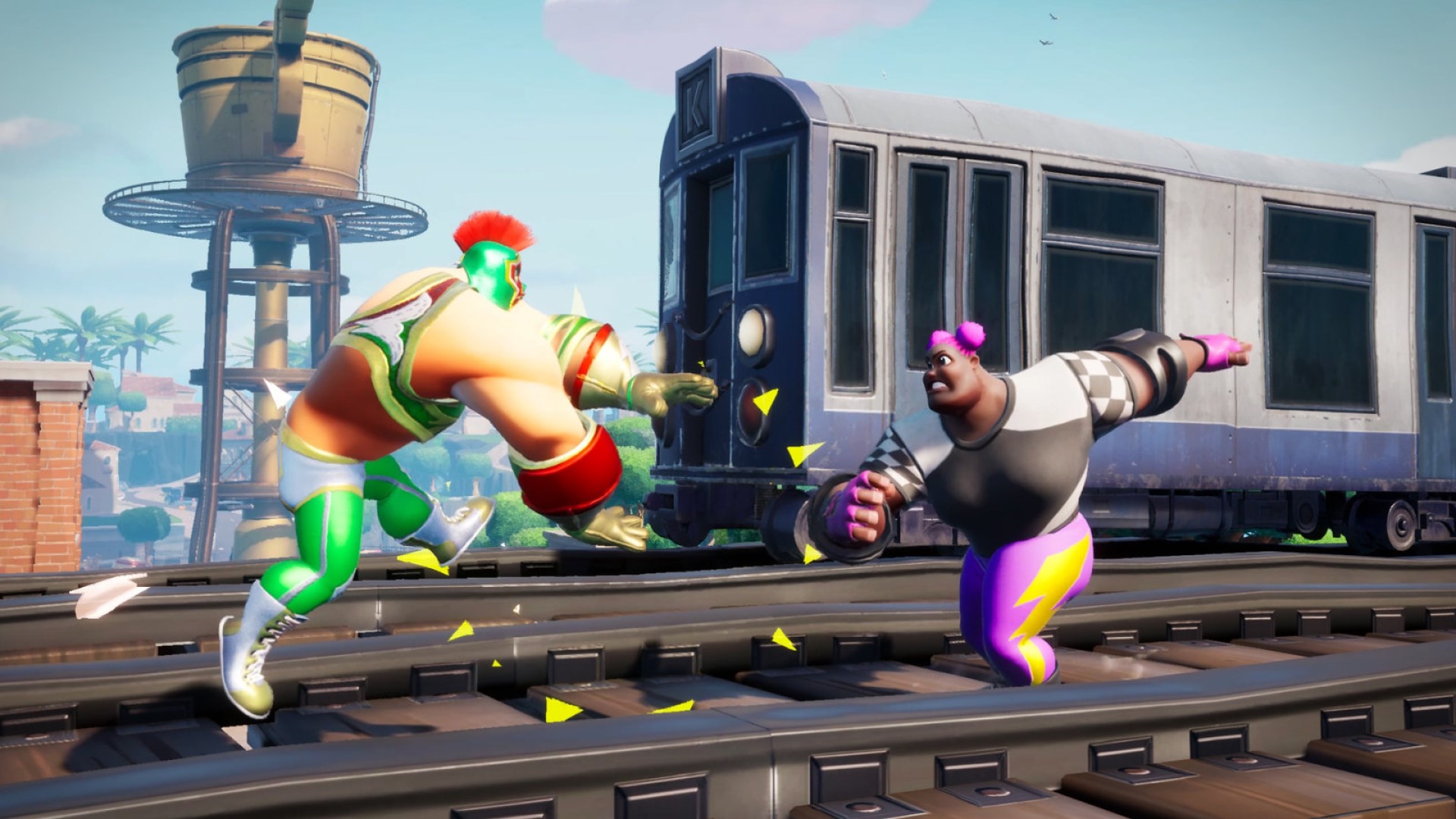 "Some environmental hazards or a way to close distances faster could have bridged that gap, but as it is, it rarely feels like there are more than three or four players to worry about at any given time, making the battle royale format feel unnecessary more often than not."

The melee combat itself is the game’s strongest element. This should come as no surprise given that it’s pretty clearly the only area Iron Galaxy felt the need to stand out, but for what it’s worth it’s a pretty solid system. Wrestling style grab moves, drop kicks, flashy combos, uppercuts, special moves, and even the occasional chair or plank of wood can make these chaotic scraps decidedly amusing. Adding fuel to the fire are various perks that raise your max stamina, health, and other buffs can make some players more well-positioned than others. Leaping head-first into the fray and hoping you come out on top isn’t inherently any worse of a strategy than skulking in the background and picking off opponents as you see fit. I was surprised to see just how well or poorly I could do with just about any approach I could think of, and that’s what you want to see in a game like this as it seems to have room for a good variety of play styles to all flex their skills in the game’s solo or duo matches.

Camping behind cars or other objects for the majority of the match is easily done though, whereas in other games with projectile weaponry, hiding out somewhere balanced out by a sniper potentially picking you off at any moment. Rumbleverse has no such counterweight. I never found myself in a match where more than a few people did this at a time, but I imagine such tactics are an inevitable speedr bump for the game long-term. A bit more variety would have gone much further for the staying power of the experience, as the literature you find scattered throughout the map that teaches you different takedowns rarely makes the combat feel any different by the end of a match, making each cartoonish cloud of lawless nonsense start to resemble the ones before it more and more as time goes on, despite them never totally losing that last bit of goofy charm.

Rumbleverse has a familiar progression system mixed with challenges that you chip away at during matches. These can range from getting a certain number of KOs to racking up a certain amount of time climbing, all of which are similar to what you’ve seen countless times and frankly aren’t that addicting to work on as a result. Also, despite the game being available for the last several days, weekly challenges are not yet available, nor is whatever the battle pass entails. But what certainly is fully functional is the game’s “Brawlla Bills”; Rumbleverse‘s fictional currency that charges $9.99 for its smallest increment of 1,100 Brawlla Bills, which is slightly more than enough to get you a pigeon mask or a mushroom hat. From there, you can pay $19.99 for 2,500 Brawlla Bills, $49.99 for 6500 and $99.99 for 14,000. These aren’t unprecedented price ranges for the genre, but that doesn’t make them any less ridiculous, and grinding away to earn these things for free is a predictably slow crawl that likely won’t feel worth it to most. 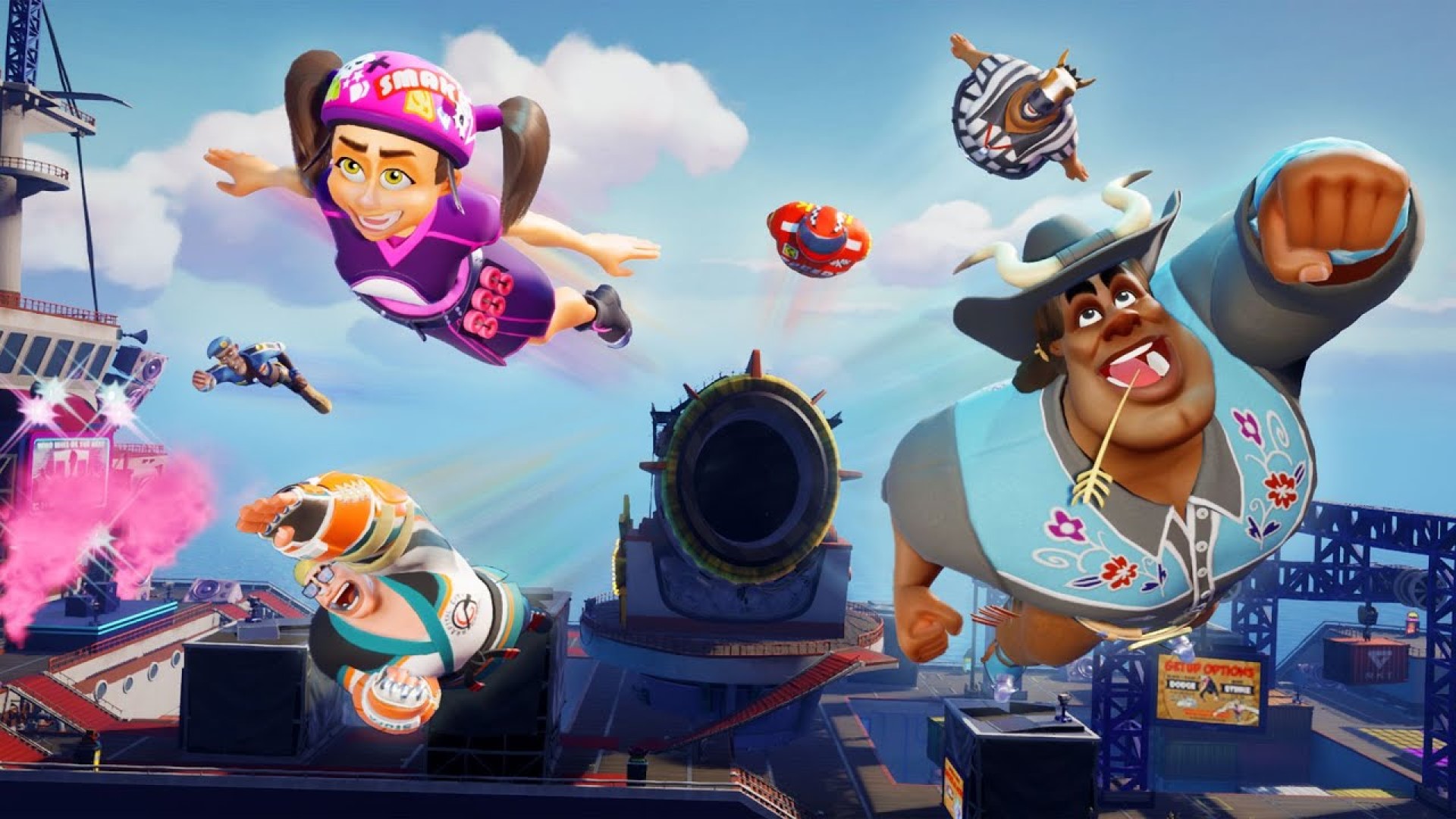 "I can’t walk away from Rumbleverse feeling particularly impressed."

Honestly, I can’t walk away from Rumbleverse feeling particularly impressed. While it manages to replicate the core tenets of its genre to a tee in most areas, and does so in a stable, polished package, it makes a near-fatal mistake in thinking a focus on melee combat is some sort of huge ace in the hole. In fact, it often feels like a mismatch for the genre as the large maps are so often underutilized by the inherent closeness the combat requires. Rumbleverse could have easily been a more standard online brawler that puts 10 fighters in a map a quarter of the size of this for a virtually unchanged experience. As a free to play battle royale game you could certainly do a lot worse, but at the same time, I struggle to imagine who Rumbleverse will hang on to long-term with so few ideas of its own and a combat system that, while charming, is just too shallow to stay fun for more than a short while.

Large maps are unnecessary and inorganic to the combat; Slow and unsatisfying progression; Extremely derivative presentation across the board.

Final Verdict:
FAIR
Despite some decent combat and sustainable charm, Rumbleverse has very little going on to hold your attention beyond one or two sittings.
This is a free-to-play game downloaded by the author for the purposes of this review. Click here to know more about our Reviews Policy.