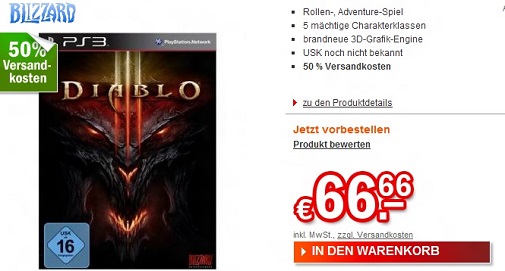 Uh oh, it seems like PSN’s open architecture may prove to be a blessing after all as a German retailer has listed Diablo 3 for the PS3. The game was rumoured for the consoles long time back, but Blizzard had denied working on it explicitly, however they did express interest.

This does seem interesting as the listing contains a box art as well and the price mentioned there is 66 Euros – which is most probably a placeholder price. The game was released on the PC last month, and the only reason why I think this could be exclusive to PS3 on consoles is because of PSN’s open architecture and the willingness of Sony to allow it – see Dust 514.

However, this is still a rumour right now, so take it with a pinch of salt but I wouldn’t be surprised if it indeed heads to the PS3.