Crytek sure knows how to make a good-looking game. An exclusive launch title for the Xbox One, Ryse: Son of Rome has already become the graphical yardstick of the new system. Of all the games I’ve played since getting my hands on my new console, Ryse has become a bit of a guilty pleasure.

Stepping into the sandals of Roman soldier Marius Titus, this third person hack and slash adventure sends us on a mission to save the ailing Empire and wreak revenge for the murder of his family, slain by a horde of brutal barbarians. Starting out as a lowly legionnaire, Titus quickly climbs the ranks before being called upon to protect Emperor Nero himself.

Gawping at the gorgeous graphics, you’ll quickly dismiss the liberties taken with historical accuracy and the repetitive nature of the combat; Ryse, without doubt, is beautiful and a noticeable leap from current gen visuals.From the expansive settings of Britannia and Rome to the very Colosseum itself, Ryse will quickly cement itself as the game of choice to best show off the capabilities of your new hardware. 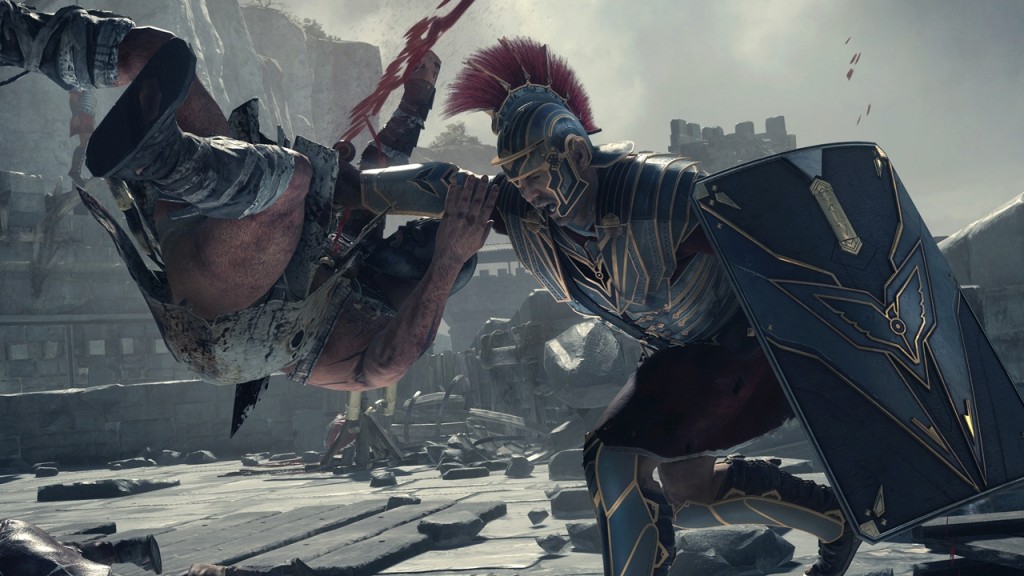 "The in-game visuals are equally attractive. All the characters appear very realistic thanks to Crytek’s efforts with performance capture and choreography. Animations are super smooth and the detailing, lighting, shadows and textures are a delight."

Just like in Dead Rising 3, the grunt of the Xbox One means that loads more can be happening onscreen, and this results in more than 100 AI characters hacking and slashing at each other at any one time, which really adds to the spectacle and sense of scale.

The cut scenes are fantastic – not a phrase I utter often – linking the campaign together nicely and boasting really impressive graphics and voice acting. From the colour and clarity of the legionnaires’ armour and Nero’s flowing robes to the painstaking detail awarded to the awe-inspiring ancient city of Rome, these are cut scenes you’ll not want to skip. Facial details are impressive too, complete with wrinkles, perspiration, stubble and lip synching.

The in-game visuals are equally attractive. All the characters appear very realistic thanks to Crytek’s efforts with performance capture and choreography. Animations are super smooth and the detailing, lighting, shadows and textures are a delight. So much so, you’ll no doubt be demanding Kinect records a few gameplay clips via the inbuilt DVR so you can take it all in at your leisure when you’re done fighting!

But is it all style over substance? Sadly, yes. 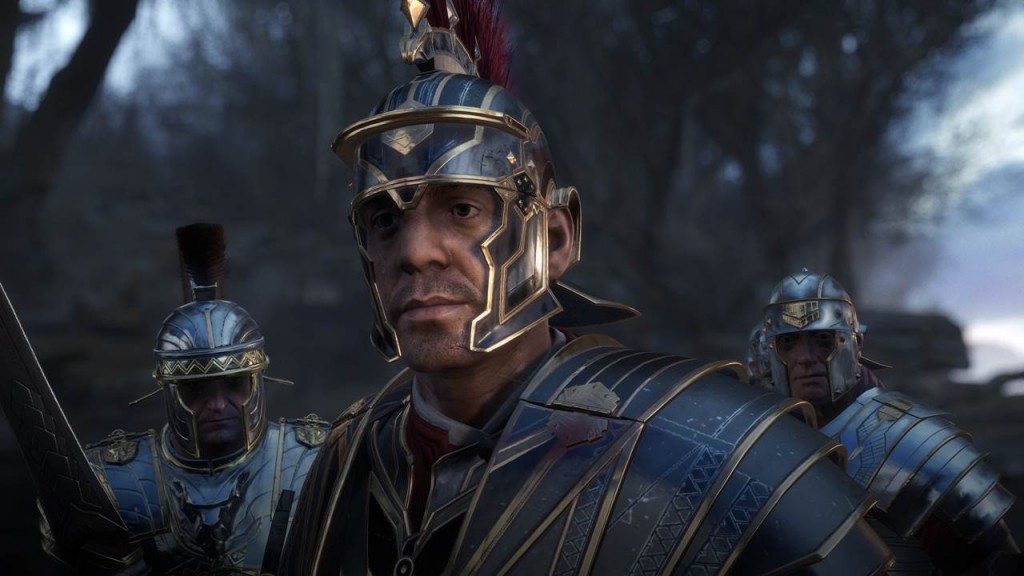 "At any moment, you can select an execution perk via the D-Pad that allows additional XP, health, focus attacks or increased damage to be awarded with each enemy you defeat."

Combat is satisfying – at least initially – with attack combos and well-timed blocks essential to break the guard of your enemies. Tap X to swipe your sword and Y to use your shield, with a prolonged button press launching a heavy attack. The A button blocks while B evades incoming strikes. Weaken a foe sufficiently and a skull symbol appearing above their heads shows they’re ripe for one of 100 gruesome executions. These quick time events are activated with the right trigger and are commonplace, each and every skirmish culminating in a timed button press that needs to match the coloured indicator surrounding the enemy. Pull it off and the throat slitting and limb loppingsequences are satisfyingly gory and really look fantastic. Points are awarded for your efforts, which can be spent in a skills tree that offers unlocks such as new execution moves. Unfortunately, you can’t decide which of these executions you trigger.

If you’re surrounded and are taking a beating, hitting RB will activate a Focus attack, which slows time and gives you a brief opportunity to unleash a series of strikes unopposed.

At any moment, you can select an execution perk via the D-Pad that allows additional XP, health, focus attacks or increased damage to be awarded with each enemy you defeat. If you’re suffering at the hands of the barbarians and your health bar is severely depleted, for example, simply select the relevant perk and it will quickly replenish. 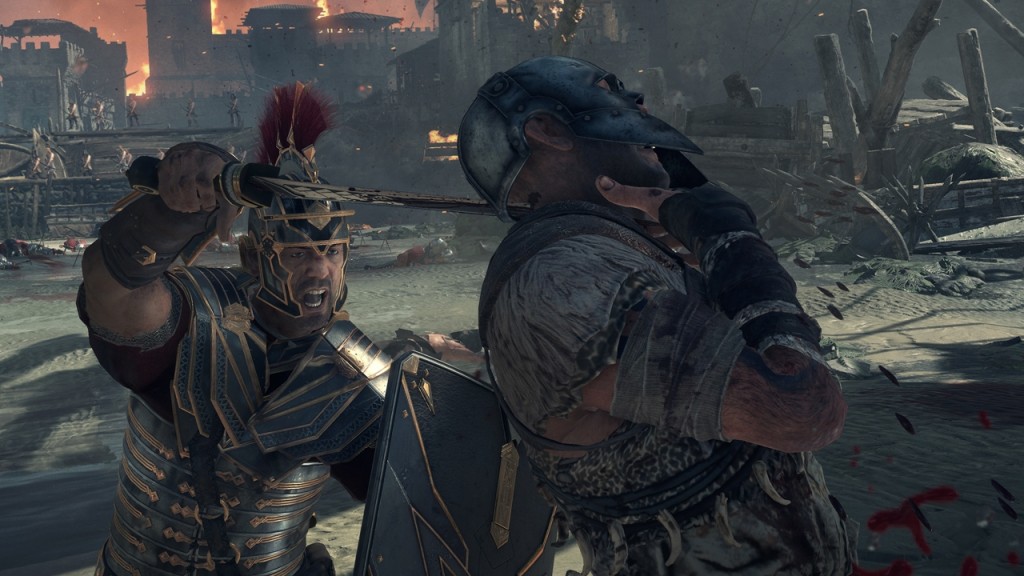 "With the top notch presentation and all the hype, it could have been the stuff of legend but despite its best efforts, the gameplay falls a little flat."

When it comes down to it, however, Ryse does become quite repetitive and you’ll become all too familiar with those sequences of attacks, counters, blocks and brutal executions. Occasionally, you’ll need to throw a pilum or two (that’s a spear to you and me), or order your fellow soldiers to fire arrows or change formation[a nice use of Kinect’s voice recognition]. It’s a real shame too that there are so few character models; having the same tubby bearded barbarian come running at you after you’ve just dispatched his doppelganger can’t help but detract from the experiencea little. The campaign shouldn’t pose too much of a challenge but when you’re done there are a couple of multiplayer modes to dip your blood-soaked toes into. There are three options available from the main menu: Arena, Round to Round and Solo.

Arena requires two players to take part – and if you don’t have a friend to invite, you can get a match up with a like-minded gamer through Xbox Live. Fighting for glory and gold, you’re both thrust into the Colosseum, the iconic amphitheatre that lies at the centre of Rome, to face a series of challenges and a non-stop onslaught of barbarians. The Round to Round option allows you to select which of the many dynamic environments you want to face, whereas Solo lets you take the horde on alone.

The gladiatorial combat is great fun, especially when playing with a friend. Each level comes with a number of challenges such as defeating waves of enemies, repelling flaming arrows, kicking over vats of oil or dousing flames to protect a giant wickerman – all of which help to boost your coffers, the collected coins providing access to upgrades.

As I said, Ryse: Son of Rome has become my guilty pleasure. With the top notch presentation and all the hype, it could have been the stuff of legend but despite its best efforts, the gameplay falls a little flat. Sure, it’s repetitive but it is still great fun… and, for now, it sets the graphical benchmark for Xbox One owners.

Top quality presentation with great visuals and fluid animation. Loads happening onscreen at any one time. Executions are brutal. Co-op mode is good fun and a nice extension of the solo campaign.

Repetitive gameplay lacks a decent challenge and there’s too much QTE running through the game. Combat is simple with very little variety. Character models are not varied enough.

Play your part in protecting the Roman Empire as legionnaire Marius Titus, a man with a thirst for revenge and a penchant for particularly gory execution moves. Ryse Son of Rome could have been a great game but its repetitive gameplay holds it back from greatness.

A copy of this game was provided by developer/publisher for review purposes. Click here to know more about our Reviews Policy.
Tagged With: Crytek, Microsoft, Ryse: Son of Rome, Xbox Live, Xbox One