The Saints Row reboot doesn't rewrite the franchise's playbook, but that doesn't detract from the fact that it is a fun-filled playground of carnage and destruction.

Developer Volition’s Saints Row originally started off as an open-world game that was clearly trying to compete with Grand Theft Auto, but slowly and steadily built its niche by honing in on its slapstick humor and over-the-top action setpieces over the course of multiple entries. Of course, most would agree that Saints Row 4 went a little too overboard with the superhero stuff – and following the divisive reception from critics and fans, the series was put on hold. All these years later, the Saints are back with a bang. Although this shiny new reboot doesn’t really bring anything new to the open world genre, it manages to find a good balance between a sense of groundedness and the franchise’s signature over-the-top action which makes for a thrilling experience through and through.

Upon booting Saints Row for the first time, you are tasked with creating the Boss through the detailed character customizer that allows you to change facial designs, your preferred voice – basically the whole nine yards. Apart from the Boss, there’s Kevin – a part-time disc jockey and a member of the Idols Collective. Then there’s Eli – a simple guy with a knack for setting up businesses and a natural liking for entrepreneurial podcasts. Finally, there’s Neenah – the gearhead getaway driver for the Los Panteros gang. The four of them share a common apartment, and are involved in criminal activity and other not-so-legal side-hustles in an effort to pay their massive student loans and monthly rent.

"Upon booting Saints Row for the first time, you are tasked with creating the Boss through the detailed character customizer that allows you to change facial designs, your preferred voice – basically the whole nine yards."

You start out as a member of the Marshall private military, which sees you undertaking a high-stakes operation to capture a criminal that requires you to plow through hordes of enemies and gang members, blow up bridges, and hijack a ride on a jet all in the span of a few minutes – which sets the tone for what’s to follow. After this action-packed opening sequence, your Boss character takes part in more daring missions – many of which involve coming face to face with your roommates’ gang members. Of course, all hell breaks loose at one point – and the four finally decide to start their own gang in the city which is called the Saints.

The story takes you through a journey from rags to riches, as you set up businesses and cross paths with the other rival gangs in the sun-soaked town of Santo Ileso. There’s the Idols Collective, a group of anarchists with a liking for everything neon and bright pink. Then there’s Los Panteros, a group of muscular thugs that also happen to be gearheads. Finally, there’s Marshall – a private militia that provides protection to anyone affluent enough to pay up its massive fees. The game’s writing itself is filled with profanities and gags – some of which can be hilarious while others fail to stick the landing which can result in an inconsistent experience at times.

It’s not all a one-tone affair- as some story beats will shed a much-needed light on a character’s backstory which adds to their personality and helps in establishing a bond with them. The missions themselves range from intervening in a huge enemy convoy to participating in a violent bloodsport to helping out a friend complete a campaign in live-action roleplaying. All in all, there’s a lot of variety within the missions – but most of them ultimately boil down to mowing down everyone in the room, proceeding to the next area, and doing it all over again. 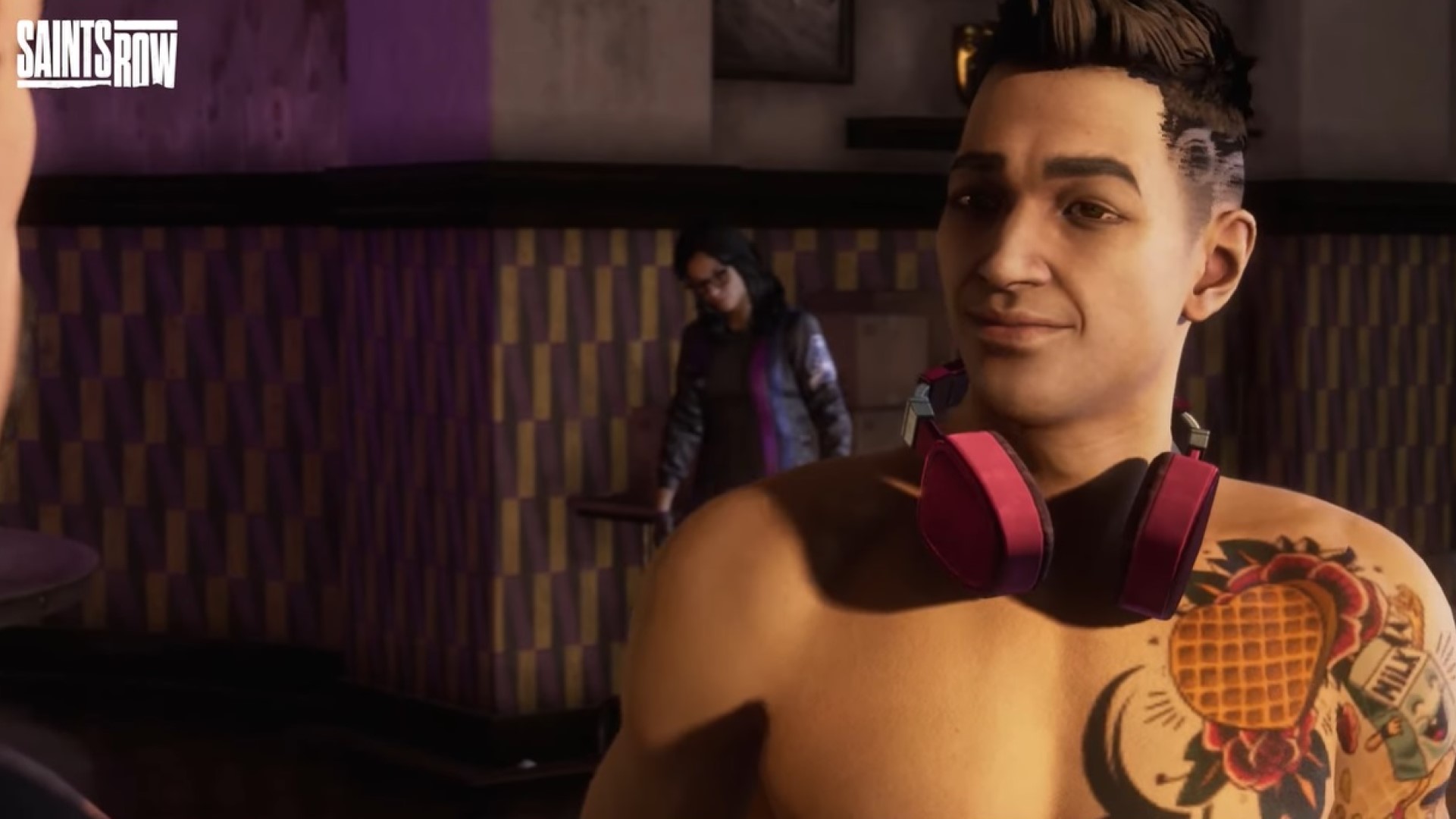 "It’s not all a one-tone affair- as some story beats will shed a much-needed light on a character’s backstory which adds to their personality and helps in establishing a bond with them."

Thankfully though, Saints Row features a simple but effective combat system. The Boss is nimble and efficient with firearms, allowing you to wield anything from a simple pistol to a sniper rifle to a rocket launcher. The combat is pretty fast-paced, as you juggle between different enemies and dodge through gunfire in split seconds. On top of being mostly dumb and inaccurate (at least on the normal difficulty), the enemy AI also tends to glitch out at times which results in an enemy looking the other way around or getting stuck in an endless animation cycle. That said though, the game will often pit you against dozens upon dozens of enemies at any given time – so these issues don’t amount to much in the general heat of battle.

As you wither down your enemies’ health bars, you will accumulate Flow points that allow you to use a few special abilities – which range from chugging a grenade down your enemies’ pants to throwing a landmine to landing an explosive punch. You gather more of these abilities as you level up your character, and active abilities can be swapped through the use of the in-game Skills app on your phone.

Vehicular combat also plays an important role in the majority of Saints Row’s missions and remains an absolute blast – both literally and figuratively. You can ram your opponents to the side of a road or down a cliff, and you can shoot through the window or the roof. The vehicles themselves control really well, and while they can feel a bit too arcadey for some – but it all works well here. You will often find yourself making your way through wrecked cars and jeeps during a getaway, and that kind of mayhem never gets old. There are plenty of options to choose from in terms of vehicles as well – ranging from motorbikes to hoverbikes to monster trucks to helicopters and much more.

"Vehicular combat also plays an important role in the majority of Saints Row’s missions and remains an absolute blast – both literally and figuratively."

Between experiencing the story and shooting down your enemies, you will spend the majority of your time expanding your Saints Empire – and that’s done through the Empire Table in your HQ. You can use your hard-earned cash to start out new businesses within the city which act as fronts for all sorts of activities. These Criminal Ventures provide you with a fixed hourly income, which gives you more cash to set up more of these businesses over time. You also need to complete activities for these Criminal Ventures, which range from delivering trucks with radioactive material into a dump to collecting cars for your garage to defeating rival houses in a game of live-action roleplaying. As you complete these challenges, you advance your Empire Rank – opening up more business opportunities that further your grip within the city. While these side activities do mostly follow the usual open-world model, they can be fun distractions from the main quest nevertheless.

Santo Ileso is a big place, and there’s no shortage of side-hustles to pursue should you wish for some extra cash. You can participate in wingsuit challenges and getaway trails that are peppered throughout the landscape or you could track down Dumpster Hunts which shower you with XP and valuable loot. There are clothes to buy, cars to customize, and guns to buy. Again, this is all pretty formulaic open-world stuff, but works fairly well within the framework of the game. 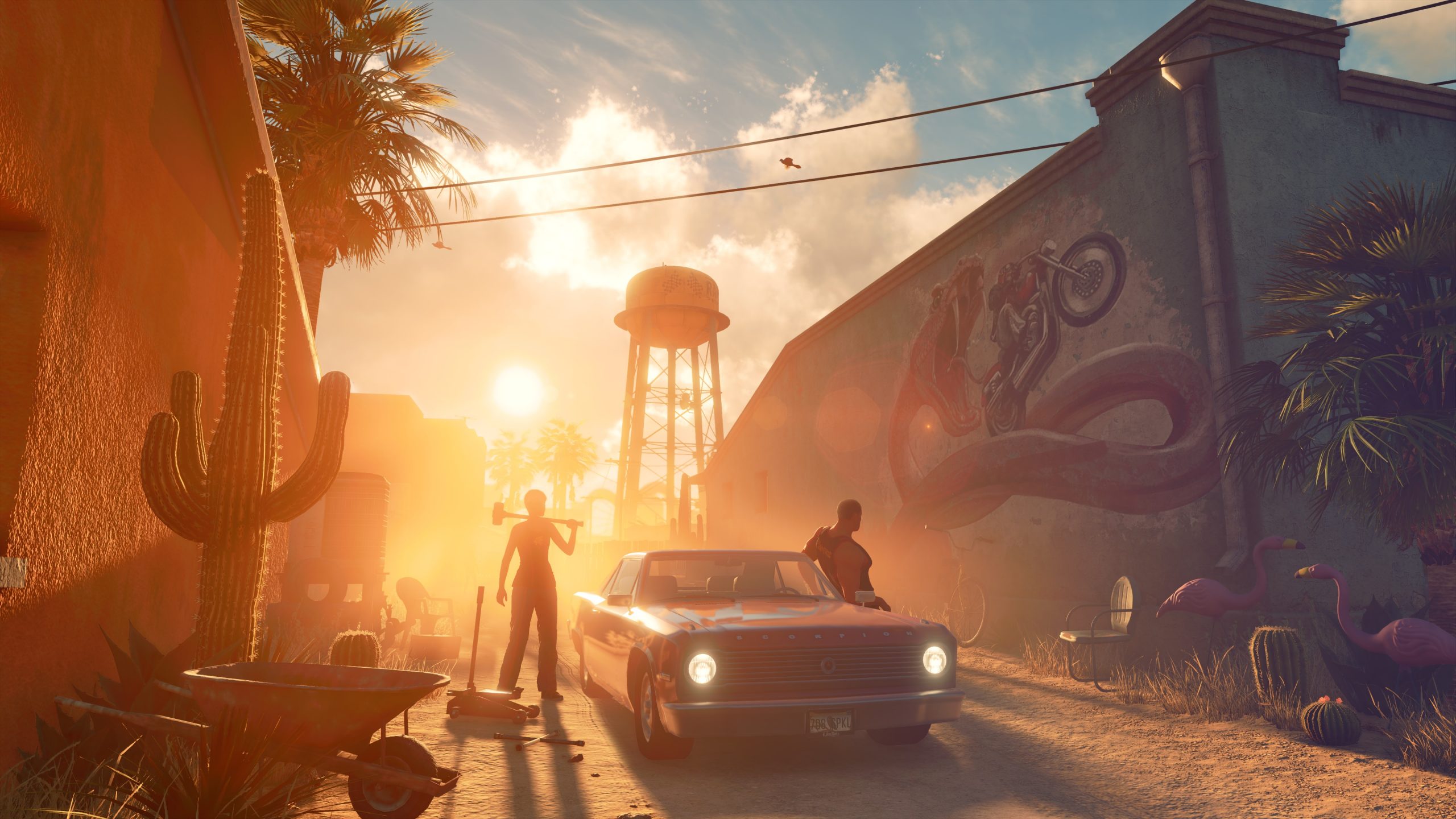 "While these side activities do mostly follow the usual open-world model, they can be fun distractions from the main quest nevertheless. "

Over on the visual front, Saints Row can be a pretty inconsistent game. There are times when the game can look absolutely gorgeous when you are zooming through the streets in a sports car all while the sun shines through your reflective car body, but at other times – you are subjected to blurry and unexpressive character models that are comparable to a seventh-generation console game. Thankfully though, the performance remained mostly solid throughout the experience – and Saints Row offers a decent variety of graphical presets to prioritize resolution or framerate.

All things considered, Saints Row is a worthy reboot for the franchise. It’s not something that reinvents the wheel; it’s a pretty formulaic open world that comes with most of the genre’s trappings. But in the face of its fast and frenzied gameplay loop and varied mission designs, these gripes get reduced to minor inconveniences as you embark on a journey to become the biggest gang in Santo Ileso.

Final Verdict:
GREAT
Despite a couple of shortcomings and genre trappings in its open world department, Saints Row remains a thrill ride through and through - thanks to the supremely enjoyable core gameplay and varied mission locales.
A copy of this game was provided by Developer/Publisher/Distributor/PR Agency for review purposes. Click here to know more about our Reviews Policy.