In discussions about the best game in the Saints Row series, Saints Row: The Third gets brought up more often than most, and so, a chance to revisit its chaotic, bombastic world with a new coat of polish is an exciting prospect for many. What’s even more exciting is that in a time where remasters of older games so often turn out to be disappointingly lazy, with Saints Row: The Third Remastered, developers Sperasoft have gone above and beyond with the improvements they’ve made to the original game. To learn more about these improvements and the work that went into them, we recently interviewed the people behind the gamee- you can read our conversation with lead art director Nikolay Stoyanov of Koch Media below.

"To say that it was quite a lot of work would be an understatement. The game received a full makeover."

From what we have seen of it, the remaster looks like it will make a pretty impressive visual upgrade to the original game. What can you tell us about the tools it uses to deliver better visuals?

The game runs on a custom open world engine that was originally created by Volition. It has been heavily upgraded by Sperasoft for the remaster. Across the engine, there are a number of tools for content production that had to be upgraded to support the new rendering tech as well as everything that relates to world streaming.

What can you tell us about the new lighting engine in the remaster, and what sort of an impact it has on the game’s visuals?

It was one thing to bring the city, characters, cars, weapons, and materials of the game to current generation standards, but for PBR assets to truly shine, introduction of Global Illumination and the right lighting setup was necessary.

We pushed every Time of the Day to enhance the mood. Some, like sunrise or sunset, are completely different than what they were before. Obviously with the introduction of the new rendering tech, this allowed us also to represent the wet surfaces and reflections in a more realistic way which elevates the world immersion.

To support all of this, the team had to implement many different solutions. To name a few besides the Global Illumination, there is fully new sky per setting, reworked in HDR, with eye adaptation and increased level of credibility; Cubemap reflections; Volumetric Fog, which is having dynamic values for height, density, position and all changes are noticeable with the camera movement, and of course having Light Shafts, especially noticeable in downtown.

Recalibrating the palette of the world improved the overall readability of the scene and surroundings, and helped achieve more accurate lighting results.

How much work went into redoing all the assets for this remastered release?

To say that it was quite a lot of work would be an understatement.

The game received a full makeover. The silhouettes of the buildings players can see in Steelport were tweaked and more details were added to the light and shadows to play off them better. The materials and textures were improved, and the geometry of many props were reworked from scratch. Interiors received improvements on materials, adding a more atmospheric and immersive feel thanks to the new rendering approach. Generally, reflective surfaces now show reflections, and lighting for interiors was overhauled.

Vehicles themselves were reworked and improved over the original game’s base models. Their fidelity is increased, with a higher level of detail and poly count. Every single undercarriage, engine, interior, damage model and exploded version of a car was fully remastered. The lights, grills and bumpers have been completely remade with an additional level of detail and more realistic proportions. Some custom rims received a completely fresh redesign, making them more modern. Thanks to the new rendering approach, the materials, colors and decals on the cars respond better to the various lighting conditions.

Another major overhaul received involved all the weapons – they were completely remade from scratch. The models have higher poly counts and an increased level of detail with new, realistic materials. But most importantly, the designs have been adjusted to conform to modern AAA standards as well as push more realistic proportions while keeping the base idea of the weapon close to the original. Those are key assets to the game as they are part of the front facing UI, cutscenes and gameplay. The increased fidelity there greatly improves the overall experience.

"Obviously, with the new visuals and increased density of the world, all the product technical budget became more taxing for the current generation hardware and having split-screen was simply not possible."

Of course, a massive amount of work also went into the characters in the game. For the story characters the assets were completely redone from scratch, based on high poly models, with greatly increased fidelity and high-quality materials. The original game’s more stylized characters underwent an update over their art direction to fashion them more after the original brand vision and communication via the Power Trailer. With the new materials on the main character models the lighting responds much more realistically and that also made the cutscenes shine in a better way.

Secondary characters have also been reworked – they are based on high poly models with highly increased fidelity as well, while staying true to the original concept. This includes any gang members, or the typical SWAT/Army/police guys the player can encounter in the city.

The pedestrians received material adjustments and key assets, like heads or cloth pieces have been remade and updated with overhauled shaders and materials.

Finally, the player character which the players can create themselves received a new high-quality base body. The materials and shaders for the clothes have been improved to bring the game to current generation standards.

It’s been confirmed that Saints Row: The Third Remastered will run at a frame-rate of 30 FPS on consoles, though many were hoping that it would hit a frame rate of 60 FPS. Can you talk to us about that?

For the remaster, assets were brought to a higher resolution or were even remade from scratch with much higher polycounts in mind, especially to be on par with modern standards. That, coupled with a new rendering pipeline with GI and post-processing, makes it more taxing for Generation 8 consoles. However, with extensive optimization in the end we were able to perform with stability on pro consoles above 30FPS, which allowed us to add the option of enabling or disabling the framerate lock on console. This means that players can expect close to 60FPS on Xbox One X, for example.

What was behind the decision to remove split-screen local co-op from the remaster?

Obviously, with the new visuals and increased density of the world, all the product technical budget became more taxing for the current generation hardware and having split-screen was simply not possible.

What kind of QoL upgrades we can expect from that game?

Aside from all the visual improvements, the game also runs more stable on the various platforms and it stutters less even during busy moments. The game UI is also optimized for 4K ensuring a nice, crisp display and the game now sports a brand new, shiny main menu along with a completely new batch of loading screens. We also spent a remarkable amount of time fixing legacy bugs whenever technically possible.

While the gameplay or the content was not touched for the remaster, thanks to these improvements and the visual upgrades it is now the best way to enjoy Saints Row: The Third. 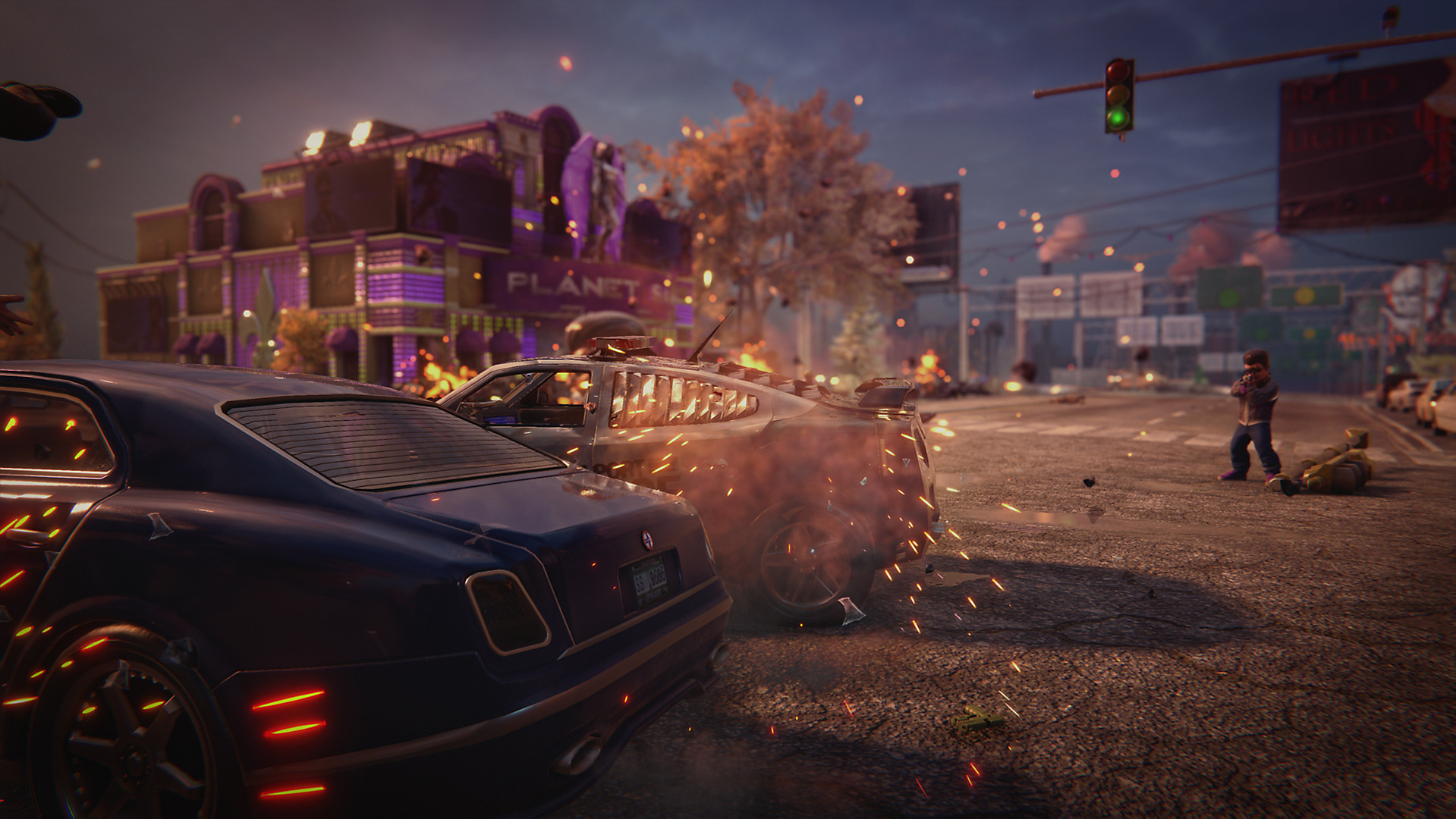 "While the gameplay or the content was not touched for the remaster, thanks to these improvements and the visual upgrades it is now the best way to enjoy Saints Row: The Third."

Nintendo Switch owners got a port of Saints Row: The Third not too long ago- have you given any consideration to putting the remaster on the system as well, perhaps as a cheaper upgrade to those already have the previous release?

At this point in time, there are no plans to port the remaster to the Switch.

Will the game feature Xbox One X and PS4 Pro-specific enhancements? Is 4K on the cards?

The Pro consoles are running at native 1440p (2560×1440), with temporal upsampling to 4K output from 1440p. Regarding the framerate, we offer the option in the game menu to enable or disable the FPS lock to accommodate players’ preferences. Aside from the higher resolution, Pro consoles (and base PS4) also support HDR.

How is the game running on the original Xbox One and PS4, in terms of resolution?

On base consoles, the game is running at native 1080p output at 30 FPS. However, we offer the option to enable or disable the framerate lock on console. Even base console models can enjoy a higher framerate experience.

We are currently focused on releasing the game as best as possible on current generation hardware, and while there are currently no plans for Generation 9, we will closely monitor the market.