Who keeps buying these games year after year? Seriously? I recall playing Dynasty Warriors 2 on the PS2 back in 2000 and it was pretty fun. A decade later and Omega Force has shamelessly re-released the same game about fifteen times over, adding virtually nothing to the existing formula with each new iteration. The newest game in the series, Samurai Warriors 3, isn’t necessarily an awful game. The dated visuals and engine however, combined with the sheer lack of advancement in the gameplay make this mediocre sequel little more than a brand new way for gamers to have their wallets pillaged once again.

Samurai Warriors 3 is loosely based on, not surprisingly, the samurai era of ancient Japan and ties into the great battles of the era with a questionable amount of historical accuracy. Right away the loose basis on historical events is a clear sign that this game will be no different to its prequels, as between Samurai Warriors 2 and 3 it is highly unlikely that this chunk of history has mysteriously changed. The battles you participate in are the same as they were in the previous two SW titles and the gameplay is unchanged from any of the previous Omega Force games: There are loads of bad dudes. Go kill them all. It’s the same basic, but enjoyable third person hack and slash gameplay we knew and loved ten years ago. That said it certainly has become a little stale over the years, and the lack of changes in the gameplay hasn’t helped this one bit. The only key differences in the game are a spirit dash move that can extend your combos and items you can use mid-battle that might boost your stats or give your character a health boost. Aside from these pitiful attempts to improve the formula it’s exactly the same. You still have light and heavy attacks, you can still ride horses, and your super-powered musou attacks still clear the screen. It’s still satisfying fighting through hundreds of AI single-handedly, but this is very lazy game design. 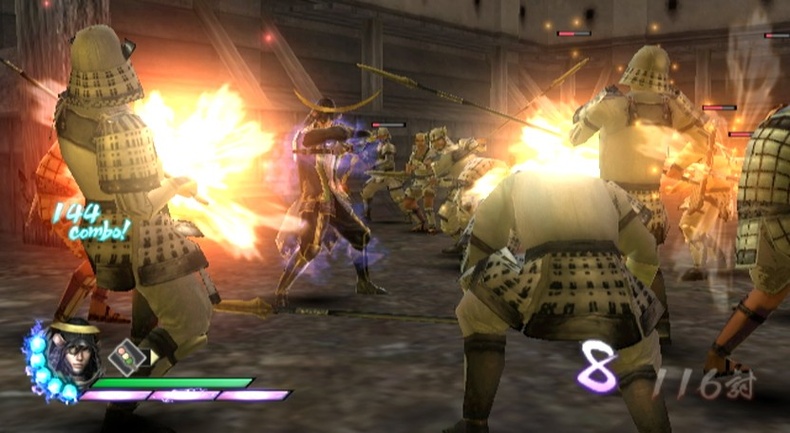 Whoever thought taking down an army single handedly would be as easy as pressing A a lot?

While on the topic of the one man army feeling the series does so well, it must be noted that a key problem that has plagued the series has yet to be fixed. The feeling that you are the only competent member of your army. Too often do you find yourself having to defend countless AI partners and generals, while they sit scratching their heads wondering if they should be helping in any meaningful way. The AI is bad, and in ten years you think this aspect of the series may have been corrected. On the plus side you can play all game modes with a friend in split-screen. It goes a long way to alleviate the repetitive nature of the game’s basic mechanics and playing it with a mate can be a good laugh in small doses. You can also play co-op over the Nintendo Wi-fi connection, (in the Murasame castle mode only for some strange reason) but this isn’t really a valid option. I tried this out in an effort to test it and literally no one was online. I couldn’t even get a single game.

I think the biggest problem with the core mechanics of SW3 is the lack of desire it instils in you to keep playing. 2008 saw the 6th title in the Dynasty Warriors series, which introduced a new engine that made the game feel more fast paced and addictive. This is oddly not present in Samurai Warriors 3 and it all just feels very dull and plodding now in comparison. Not only is the action not particularly inspiring but the plot and dialogue are paper thin and, even though there is a vast roster of characters to choose from, none of them are particularly memorable or three-dimensional.

It’s a shame that the main gameplay of SW3 feels so dated, as a lot of the content on the disc looks very good on paper. There are a lot of different characters to play from, 44 in total, but the rudimentary nature of the combos system means they all feel pretty similar to play as. Likewise you can create your own character as well but the customization options are very limited. There are multiple modes to choose from including a story mode for a large majority of the characters, a historical mode where you take part in key battles in history using a custom character, and Murasame castle mode where you combat demons through individual quests within said castle. It’s a nice touch including multiple modes, but they all boil down to the same boring button mashing combat the series is famous for. The RPG elements of the series are expanded as well with new weapons that can be forged, collected and upgraded as well as new combos that are unlocked as you gain experience, but it all does very little to enhance the experience or change the way you play. There are a huge amount of different maps to go through as well, but they all just merge into each other and are so similar it really makes no difference either way. Samurai Warriors 3 is last years game posing as the new thing. 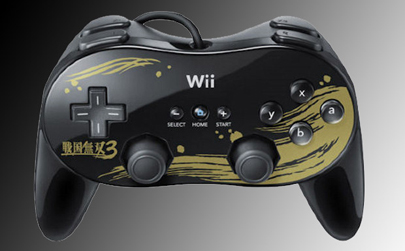 Well, I say it’s “posing as the new thing,” but that would imply the game compares to other contemporary titles graphically. The change from the series being on Xbox 360 and PS3 to the Nintendo Wii means that the sequel’s graphics are worse than its predecessors. It just seems like it has taken a major step back visually. The graphics are technically uninspired and the colour palette on display is horribly dark and bland. To top it all off the frame rate isn’t even particularly steady with major dips in frames per second when lots of AI come on screen. Omega Force seemed to switch platforms in an attempt to breathe new life into the series, but visually speaking, this has done little more than cripple and already limping franchise.

The uninspired audio also contributes to, what is, a poor effort at game presentation. The music is largely unmemorable and seemingly inappropriate as well. Most of the time traditional eastern instruments are used, which makes sense considering the historical Japanese setting, yet some battle music sees an electric guitar led rock arrangement that seems highly out of place. The sound effects are comparatively better adding weight to the lacklustre hacking and slashing going on. Sadly the voice overs don’t continue this momentum and for most characters their voices are just plain annoying or mediocre at best. Cover your ears while you play SW3, you won’t be missing much.

The sheer amount of content on offer actually does pitch Samurai Warriors 3 with a conceivably endless lifespan. That said it’s unlikely that the repetitive nature of the game will hold your attention for very long. In terms of value for money it certainly looks good on paper, but the lack of new features mean that you’d be better off getting one of the older and now cheaper titles in the series. It’s effectively the same game you’d be getting but for a quarter of the price. 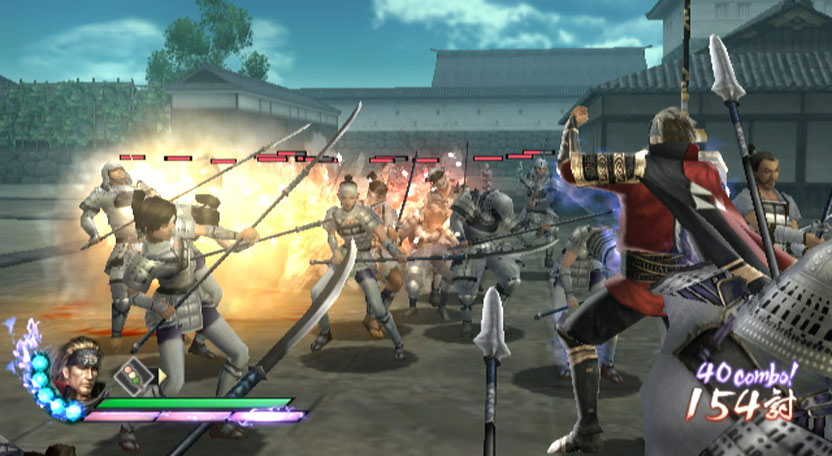 The Dynasty/Samurai Warriors series is not a bad dog. It doesn’t bite and largely does what it’s told. But with this new addition to the series we can see that the dog is getting old and is clearly in a lot of pain. It needs to be put down. SW3 wouldn’t be a complete waste of your time or money, but out of principle I urge you to leave it on the shelf where it belongs. The more copies that get sold, the more Omega Force thinks we are willing to put up with more of this same crap re-packaged over and over again. It is lazy game design and is a malicious attempt to make as much money as they can with as little effort as possible. I felt insulted playing Samurai Warriors 3 and, unless this is your first foray into the Warriors series, it’s likely you’ll feel the same way.

Easy to pick up, Lots of characters and levels, All modes can be played co-op, You can create your own samurai

Final Verdict:
BAD
Omega Force return bringing us yet another title in the Dynasty/Samurai Warriors series which, like its predecessors, adds very little to the standard hack and slash mechanic
A copy of this game was provided by Developer/Publisher/Distributor/PR Agency for review purposes. Click here to know more about our Reviews Policy.