With all the original, award nominated, unique arcade games that have been coming to light lately, Scary Girl is yet another arcade title that is indeed unique from any other game. The game is almost like a children’s story that is narrated in between every level, but has an odd twist to its nature. One that may be compared to something of the like of ‘Alice in Wonderland’ or Tim Burton’s Nightmare Before Christmas film. The unique aspect of the game comes from its art style as well as its very odd and at times hard to follow story. When it comes to the gameplay, Scary Girlis very easy to play no matter what kind of gamer you play, with it almost feeling familiar. 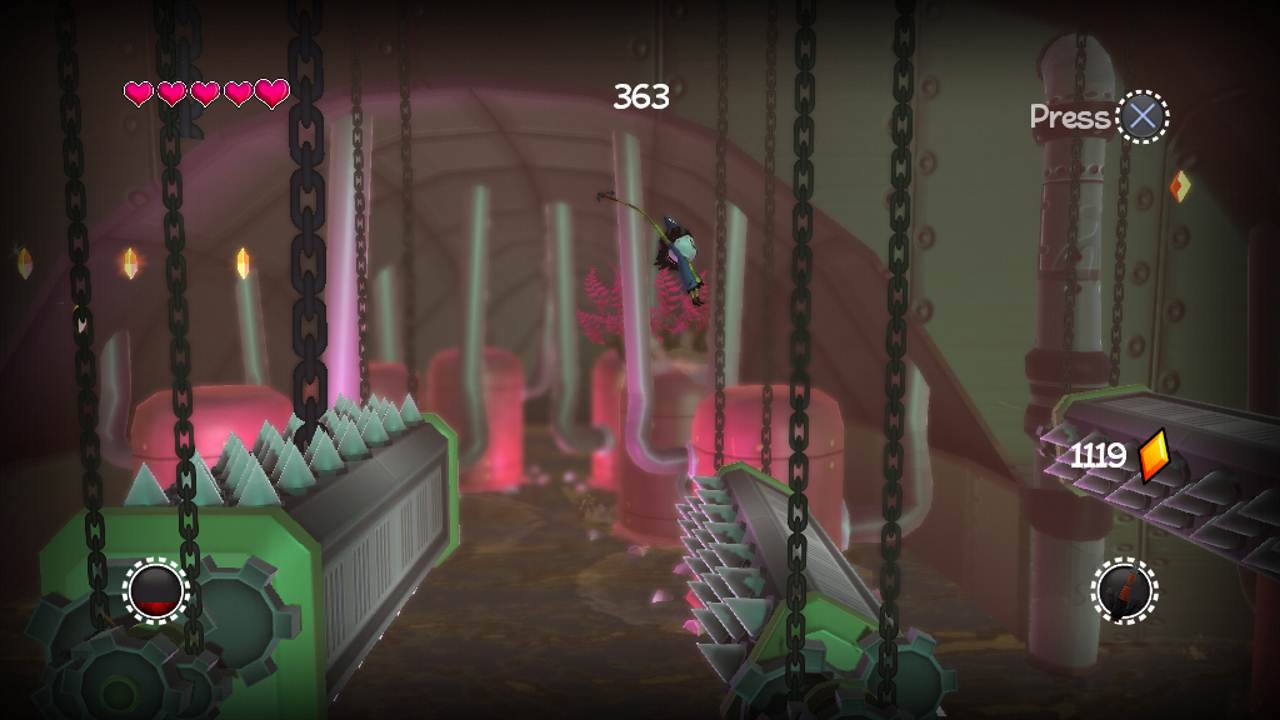 Scary Girl is you basic platformer when it comes down to the gameplay and the enemies. There are bosses that you will encounter throughout the six hour campaign which all have a different technique or strategy you will need to figure out to defeat them. You have a slashing hook/arm that you can use to attack enemies as well as grab on to them and either bash them on the ground on top of other enemies or throw them at enemies is any direction thanks to the left joystick. At times you may need to use enemies to launch them in a direction to progress, where your arm/hook is also used to grab onto vines to swing to a distant location as well as give you a float ability aside from jumping, using as a propeller.

You can upgrade your combat skills and weaponry whenever you come across an oddly looking merchant selling them, which you must use little diamonds you collect throughout the levels, which are the basic currency as they may be compared to coins in other games. Upgrade your hook arm with different attachments is a choice or you can purchase new moves to inflict more damage on enemies with some giving you the upper hand. Scary Girl can also purchase little 3D Vinyl’s of enemies which only serve the purpose of being able to look at them in your collection a top your bed in your little home where you can select levels, continue your campaign or jump into the ‘Onion Bowl’ which is just tutorials on how to play. It makes more sense to purchase upgrades to your arm more than anything as you can buy a feather letting you float farther, which is necessary to collect certain things like heart containers giving you more overall health (much like the Zelda games) and a better hook that has more range, beneficial for all its uses among other upgrades. 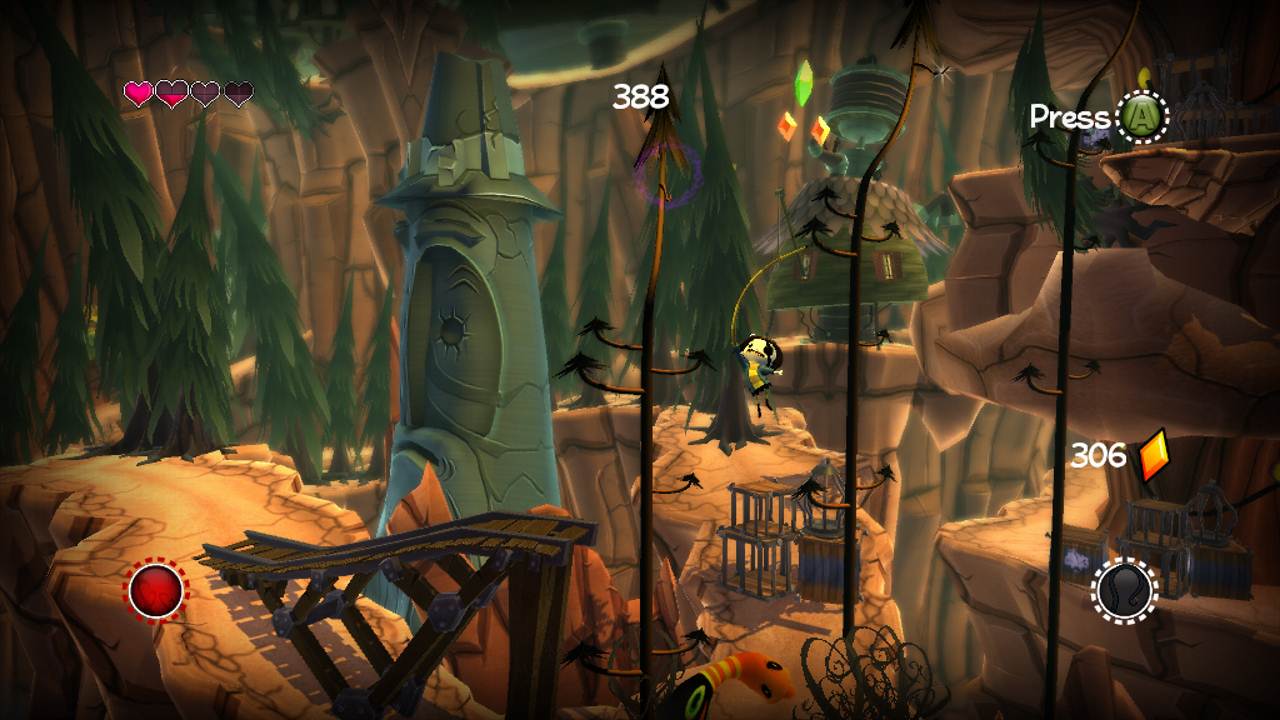 Another odd friend you may come across is a fellow that with give you full health provided you pay the fee. There are plenty of different enemies in the game that you may use different techniques to defeat, like combos (with you having a heavy/light attack as well as your grapple), but most enemies can be killed from just simply button mashing the light attack button. This aspect of combat separates Scary Girl from its other unique, platforms, arcade counterparts in a way that can be looked at as not being creative or difficult enough. However I think it is a great way to bring people that are not platform masters into the type of game as well as making it easy for a younger audience to get enjoyment out of it.

Personally I enjoyed the game, not having the frustration some of the award winning arcade titles that has given me with their challenge. Not everyone appreciates that challenge while Scary Girl is not all easy while I found myself dying throughout different parts of the campaign. The game has 7 levels with 3 stages on each level. As far as the enemies and the backdrop of the game, it was not as impressive as I might have expected. The real unique aspect of Scary Girl is the twisted, yet not evil story and Scary Girl herself as she looks like a sewn together doll that looks like a pirate… something that looks like it came straight out of the mind of Tim Burton if you ask me. 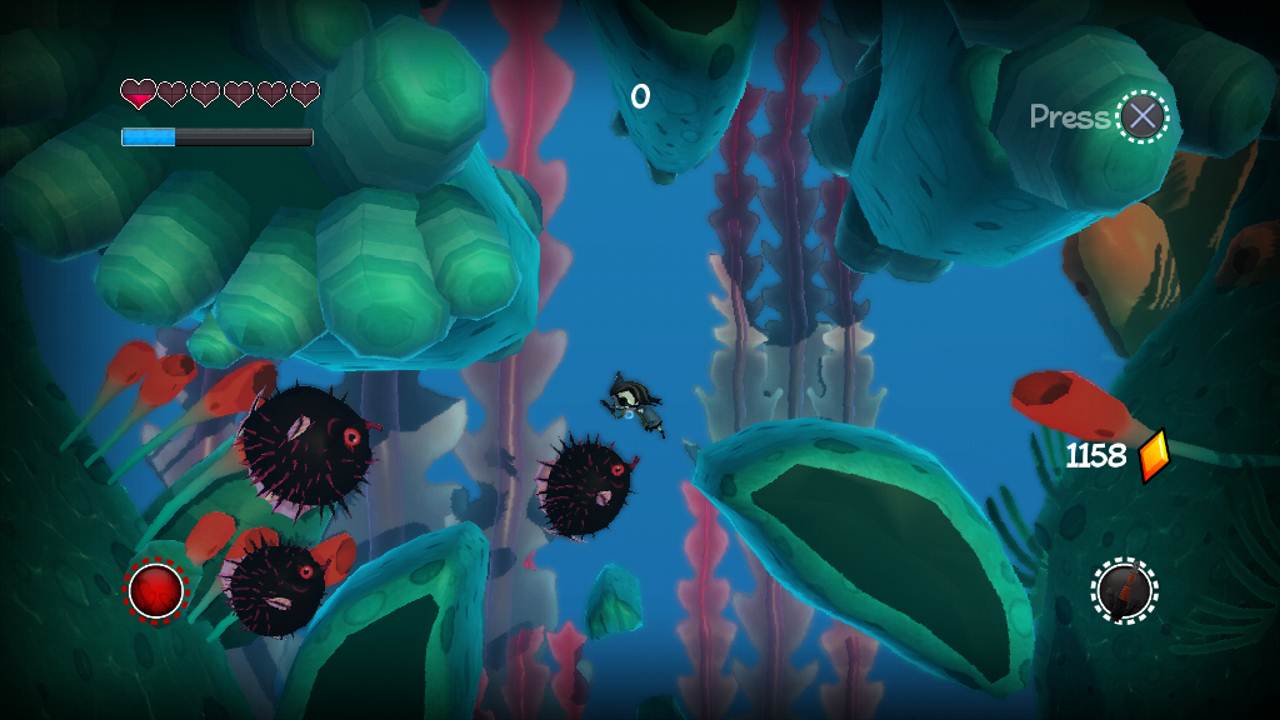 Overall Scary Girl is fun game; it has things here and there that make it new, like having to choose between a fork in the road which in a 2D styled platform game is not usual. However it was things like those that made enough difference to make me appreciate the title along with its twisted style of children narration, its unique art style of the main character and the overall gameplay. You can also play the game in 2 player offline co-op which is a plus as well as a minus. This aspect is great and should have been pushed farther to make it an online co-op title especially with there not being any other multiplayer aspects of the game. If you are looking for something new and fun than Scary Girl is certainly something you should consider purchasing. If you are looking for something to compare or top some of the recently, extremely unique, challenging arcade platformers that have come from indie developers, you may want to look elsewhere. Never the less the game is an enjoyable experience that anyone can jump into.

Unique, twisted looking main character. An entirely new take on storytelling, resembling that of narration from a children’s book. Satisfying gameplay as you may upgrade and purchase moves. Scary Girl is also 2 player couch co-op.

Enemies as well as the backdrop of the game although fitting with the theme can sometimes seem bland. Co-op is strictly offline.

Final Verdict:
GOOD
A unique twisted story of a girl that looks like a rag doll from hell but has some cool abilities with her upgradable, hook like tentacle arm that will be the main basis for combat as well as progression in this arcade platformer, that offers up a game that anyone can enjoy, from children to adults.
A copy of this game was provided by Developer/Publisher/Distributor/PR Agency for review purposes. Click here to know more about our Reviews Policy.