Scathe Review – Weaker than the Sum of its Parts

Scathe is a fast-paced first-person shooter that’s trying to be many things at once: a boomer shooter, a bullet hell, and even a sort of roguelite. How well can it actually manage to fit all of these ideas into a single game, though?

The first major release by indie studio Damage State, Scathe is an ambitious project. It hopes to be a fast-paced shooter and also borrows ideas from other genres, such as bullet hell games, and even roguelites. But the question is if all of these inspirations and ideas come together to form a coherent whole. Before we get to that, let’s get all of the basics out of the way.

Scathe harkens back to a nostalgia for a time when shooters were fast-paced, you didn’t need to aim down sights, and health didn’t just regenerate automatically. What sets Scathe apart from its contemporaries is that it presents some unique twists on the typical shooter formula.

Rather than going through all of the levels in a row as you carve a path of destruction, Scathe actually uses a hub-and-spoke design for its world. You start out in what loosely counts as a hub area with the option to pick your next level. Doing so then locks you into finishing those levels, ultimately exploring the labyrinth of Scathe and coming back to the starting point, hopefully stronger and wiser.

Interestingly, throughout its level structure, Scathe actually makes it quite difficult to gauge your general progress through a section of the map. Rather than letting you know how many levels you’ve finished or how many you still have to get through, Scathe shows you symbols that, over time, start making more sense through sheer repetition. You’re going to be going through these levels quite a bit, you see, so getting used to the symbols that denote levels becomes a somewhat useful skill to pick up. 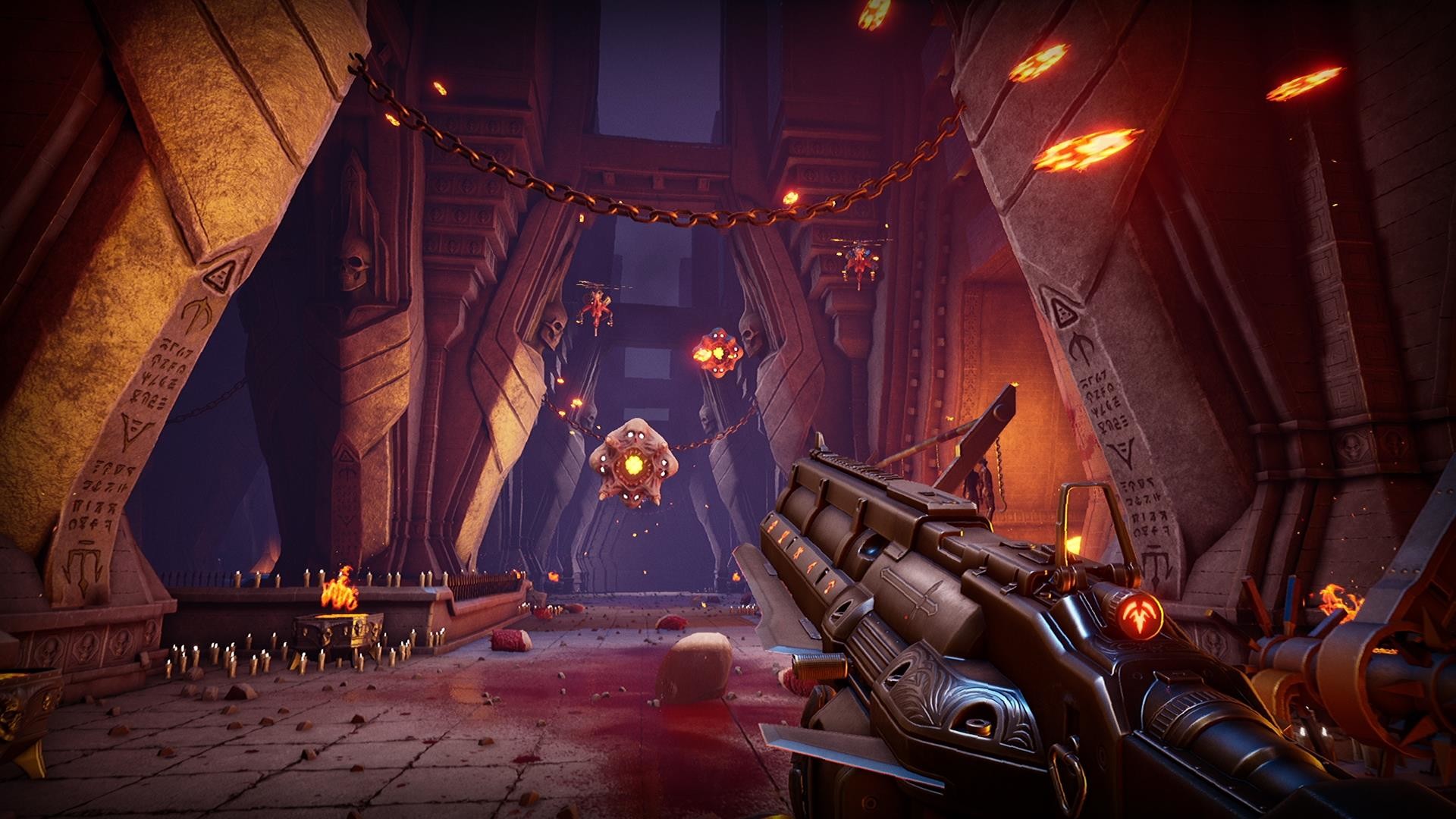 "Scathe harkens back to a nostalgia for a time when shooters were fast-paced, you didn’t need to aim down sights, and health didn’t just regenerate automatically. What sets Scathe apart from its contemporaries is that it presents some unique twists on the typical shooter formula."

When it comes to the shooting, Scathe is incredibly fast-paced. Its speed feels closer to classics like Quake rather than more recent shooters; you’re going to be zipping through levels at immense speeds, dodging and murdering your way through hordes. This speed has a greater purpose than just evoking nostalgia for old-school shooters, however. Scathe’s biggest inspiration is the bullet hell genre.

Enemy attacks are relentless, and you’re going to be constantly on the move to dodge these attacks. Taking this into account, Scathe also expects you to play it how you would play a bullet hell game; keep the attack button pressed while you try and avoid getting hit by enemies. Seriously, accuracy isn’t really a concern here. You’re going to want to focus all of your mental energies on keeping track of where enemies are so you can dodge their attacks.

Scathe is also a good-looking game. Sure, it doesn’t have much in the way of variety in its aesthetics, but it certainly nails the grungy demon-infested industrial look.

Unfortunately, this is where my biggest problem with Scathe comes in. It’s just terrible when it comes to readability. At a certain point, most enemies end up becoming vague collections of pixels that you have to constantly keep shooting at. All of the variety in enemy designs—cool as they often are—feel quite meaningless because of how easily they meld into the backgrounds. Of course, the sheer number of projectiles coming your way certainly doesn’t make things better. Things that you’re supposed to pay close attention to end up just becoming part of the background.

An interesting idea Scathe has is that you also have to constantly keep cleaning your visor, lest it get too messy from enemy gore for you to see. Unfortunately, in a game already plagued with readability owing to its general visual design and aesthetics, yet another thing that obscures vision adds more frustration and tedium than it does interesting gameplay mechanics. It just becomes a boring thing you have to keep remembering to occasionally do. Thankfully, this mechanic is completely optional and can be turned off in the settings. 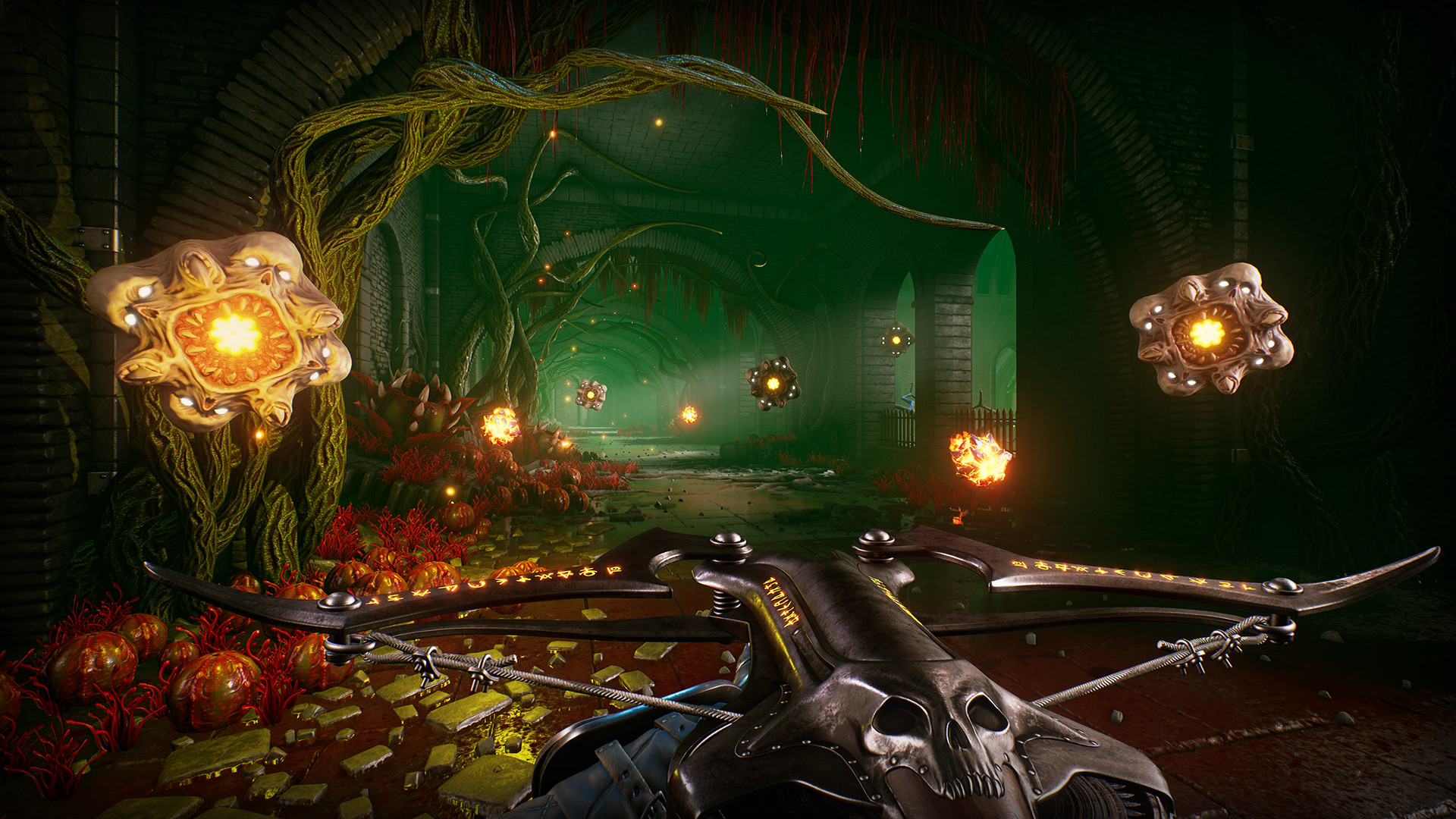 "Scathe is also a good-looking game. Sure, it doesn’t have much in the way of variety in its aesthetics, but it certainly nails the grungy demon-infested industrial look."

Scathe also borrows quite heavily from the roguelite genre. Sure, it doesn’t really have much in the way of randomization in its levels, weapons, or enemy placements, but it does take a few cues from the progression systems we’ve seen in roguelites. It’s also very much a run-based game, encouraging you to maybe try out a couple of levels before putting it down again. Scathe really wants to evoke the idea of “just one more run”. I don’t think it works that well, especially since early progression is quite slow.

It can be a while before you find a new weapon to try out, so you better learn to love the default assault rifle/grenade launcher combo you start out with. Competent as it might be, it’s a far cry from the kind of variety in weapon use you hope to get from this sort of game. You want to constantly be switching weapons depending on the situation as you duck and weave through enemy attacks. And eventually, Scathe does let you play like that. Sadly, it only starts opening up after you’ve already spent what I would consider too much time with the default weapon.

At least when it does start giving you options, the variety’s there. The whole gamut of absurd arena shooter weapons is present, from assault rifles to lightning guns to explosive crossbows. When you’re firing on all cylinders, constantly switching between weapons and taking out hordes of demons all over the place, Scathe can end up being really fun in short bursts.

Ultimately, Scathe’s biggest issue is that the individual parts that make up the whole game all end up falling just slightly short of becoming enjoyable. Its ideas of using bullet hell conventions make it a nightmare when it comes to readability. Its roguelite-styled progression system potentially slows down early-game progress to an agonizing crawl. And visually, Scathe just has a tendency to become a complete mess where not only do you not care about new enemies you fight; you also have to pay more attention to the mundane chore of cleaning up your visor. 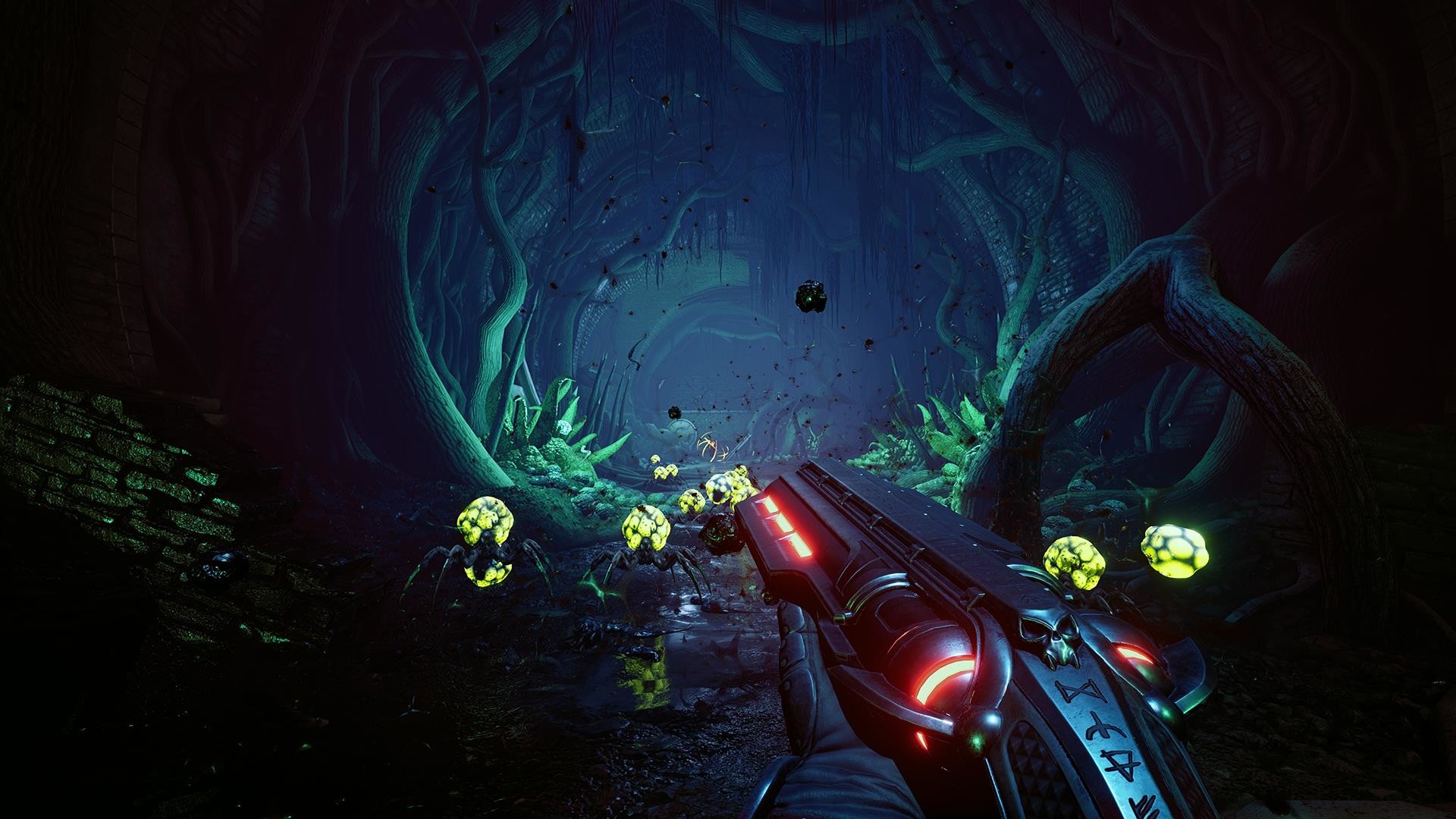 "Ultimately, Scathe’s biggest issue is that the individual parts that make up the whole game all end up falling just slightly short of becoming enjoyable. Its ideas of using bullet hell conventions make it a nightmare when it comes to readability."

Scathe might just be a victim of its ambitions. Somewhere in its hodgepodge of clever ideas lies a fun game. In fact, I imagine that its drop-in/drop-out multiplayer could be incredibly fun. Sadly, I wasn’t able to find anyone to play with for the purposes of this review. I’m also not too sure whether Scathe itself would be vastly improved with multiplayer, or if I’d have just liked the company while playing through this game.

By no means is Scathe a terrible game; it certainly has some clever ideas and genre-melding ambitions that I can appreciate. Unfortunately, it also falls just slightly short on every single count, making it feel more like a chore to play than an actual game. I certainly hope that Damage State can improve on the game as it goes on, because somewhere underneath the messy visuals and tiring progression system is a game that’s bound to be incredibly fun. I just hope that this game can make it out of the ashes of Scathe unscathed.

Visually a mess; Progression is too slow; None of the clever ideas feel fully-realized.

Final Verdict:
FAIR
Scathe has a lot of clever and interesting ideas. Unfortunately, it’s the execution that lets it down. Somewhere underneath the agonizingly-slow progression, pointless plot, and a visual mess as a result of its desire to also be a bullet hell, Scathe is a game with potential that’s sadly never reached.
A copy of this game was provided by Developer/Publisher/Distributor/PR Agency for review purposes. Click here to know more about our Reviews Policy.