An interesting take on the racing genre where the star of the show stands to be the only reason for playing.

Sebastien Loeb Rally strikes me as a title which has a great deal to prove. Launching close to CodeMasters’ DiRT Rally, this isn’t just a new I.P for developer Milestone S.r.l., it’s a competitor. Why play this over DiRT Rally? Is it more authentic or rich in content? Racing games have never had to do much in order to be taken seriously, or quite silly for that matter. With Polyphony Digital’s Gran Turismo you know the deal: simulation-based racing where every manoeuvre, gear-shift and lap-time counts. Criterion Games’ Burnout: Ludicrous car crashes where the aspects of realism fly out of the window, along with your steering wheel.

Sebastien Loeb is regarded as the most successful rally driver in world rally championship history, placing the man’s name on the front of your box means the enthusiasts have a watchful eye on you. If it wasn’t obvious already this is a simulation-based racing game, and in many instances it’s justified. Milestone’s fascination for the motorcycling scene is evident. Most recent titles such as RIDE and MotoGP 15 are some of their finest.

Transitioning to the area of rally it’s an interesting if not a curious affair as to what the studio will do in order to standout amongst its competitors. Common to most racers the most prominent reason for playing resides within the career mode. Requiring the player’s details such as name, nationality and racing number, the player will also be asked to provide details of their team serving as an avatar within its career. 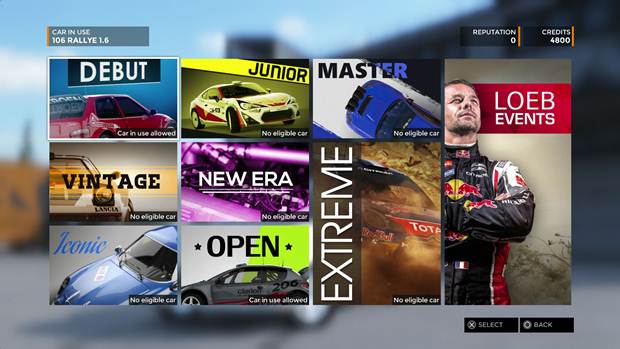 "Consisting of single stage racing, time trail, championship and rally cross, players can participate in any event so long as they meet the vehicle requirements."

While this is traditional it’s also contradictory to its primary feature: The Loeb Experience. While neither detracts from the other, first impressions have players assuming the role of Sebastien Loeb. This infact remains exclusive to the Loeb Experience. Browsing through the main menu the variety of content is satisfactory at best. Players are presented with a career, quick mode, garage and The Loeb Experience.

Consisting of single stage racing, time trail, championship and rally cross, players can participate in any event so long as they meet the vehicle requirements. Conveniently there’s a rental section should the player be in need of a ride. Once the player progresses and earns enough credits they can visit the dealership. This rental section is essentially a car selection screen and doesn’t require actual fees. The downside however is that credits and awards will not be earned upon completion. Naturally this differs in the career.

The good news is that some vehicles will be unlocked at specific moments in the game, assuming the player has become good enough to participate in these events. The game will always provide a reason to play and will do so without the mundane techniques of grinding for credits or force-feeding an ensemble of poorly developed filler-content. Making things a touch more interesting is Pikes Peak; an international time trail event which pits the player against a harsh and vicious hill climb which Loeb took the championship for in 2013. 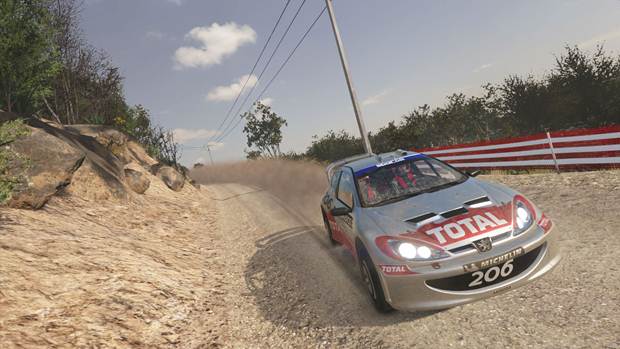 "There’s no doubting the enjoyability and the distinctive touch the studio has given in making the game unique, but in a similar manner to recent first-person-shooters it feels like it’s trying its hardest to bore players to death."

Reliving Loeb’s career through certain events that he experienced at specific times in his life, the game literally puts the player in the racer’s seat in The Loeb Experience. Appropriately titled The Early days, A Young Champion, The All-Time Greatest and so on there’s a lot to do, each with their own rules and game modes, all immersive and enjoyable.

In addition, this feature delivers commentary speaking on the highlights of his career. It’s almost as if the game’s paying homage to a dead man who’s still blitzing the track. Nevertheless, gaining some insight on his passion for the sport was interesting. Unlike Forza’s Jeremy Clark who’s oblivious to the fact that he’s outstayed his welcome, rest assure, Loeb doesn’t narrate your menus or bore you to sleep. It’s exclusive to the mode itself and is one of it’s only redeeming features. While all this is great the game itself holds an incredible amount of Deja Vu with an ever-lingering feeling of “I’ve done this all before”.

There’s no doubting the enjoyability and the distinctive touch the studio has given in making the game unique, but in a similar manner to recent first-person-shooters it feels like it’s trying its hardest to bore players to death. There are a few noticeable exceptions but the majority appear to be nothing more than refined regurgitations of the last, give or take a few lighting effects. It’s fine for newcomers and a norm for enthusiasts. One noticeable aspect is Loeb’s favouritism for Citroën. Other manufacturers are available but the game is highly set on delivering the Loeb experience. 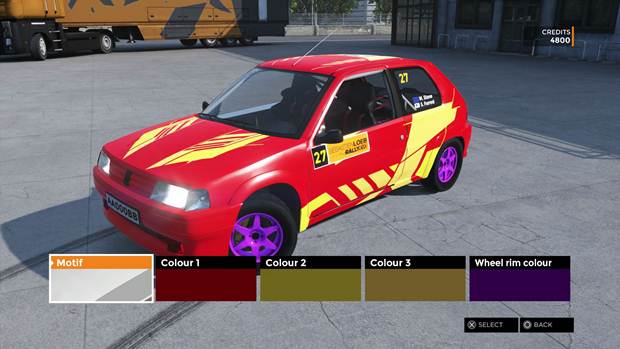 "It can’t be stressed enough as to just how claustrophobic the experience can become when it feels as though you’ve had your head duck-taped to the steering wheel in one car, only to be super-glued to the rear-passenger seat in another. "

Thankfully, the range of motors available do span the ages and each one feels authentic. Rally is an intense sport and while the game does well in managing its difficulty, I don’t expect newcomers to feel intimidated nor frustrated. It’s simple enough yet detailed for enthusiasts. As one would imagine, car tuning does hold a fair amount of depth for those willing to invest the time and there’s also an “Advanced Settings” menu to take things further.

The extent to which they’re incorporated is gratifying and proves noticeable during gameplay. While the game has every gear-shift, braking and surface transition feeling authentic, I sense the enthusiasts may be the only ones able to notice. I’d even go as far as saying DiRT Rally is more convincing and this stems from the lack of feedback I obtained from the handling model. In terms of the game’s environments and locations the variety is decent. Whether you’re smooth cruising across the tarmac mountains of San Romolo or skimming the harsh, snowy tracks of Monte Carlo, the locations on offer always deliver challenge.

As stated previously, the game caters to new-comers primarily through the means of preset difficulties and driver assists. But this doesn’t mean the game won’t bruise you when least expected, as the environmental terrain and weathering features go hand-in-hand with player feedback and vehicular control. Now, while the game is for the most part an enjoyable experience it’s not without issues, some quite major.

With such a mighty degree of emphasis and authenticity on delivering such an immersive and simulative experience, where’s the field-of-view slider? While it’s traditional for console games not to include visual and performance options, most recent games as well as upcoming ones do.

It can’t be stressed enough as to just how claustrophobic the experience can become when it feels as though you’ve had your head duck-taped to the steering wheel in one car, only to be super-glued to the rear-passenger seat in another. It’s disorienting and frustrating. The title claims to appeal to the “hardcore” yet, two of the three platforms it’s shipped on fail to incorporate such a basic feature. The game isn’t exactly visually stunning, therefore can’t be technically demanding. 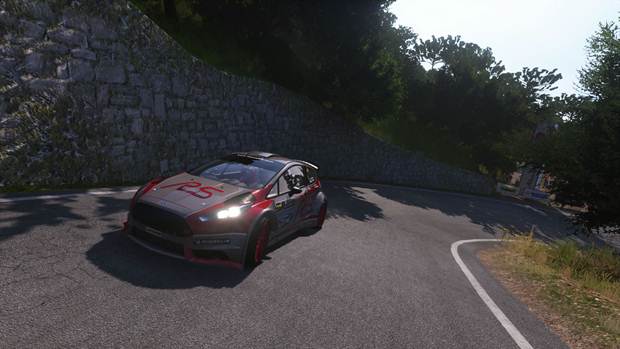 "Visually, it’s best described as “It’ll do”, so I at least expected it to abide by the standards of technical performance."

Which leads to my final point: This is simulation-based rally and that’s great too see but, there was one thing above all that completely hampered my experience. Seen by many as a subject of debate, my ignorance grants me elitism. Thirty frames per second is by no means playable when you consider the fact that anything below it becomes a nausea inducing slideshow. Especially for a racer.

Targeting the lowest common denominator in which people have forced to become accustom to is setting yourself up for failure, evidently. What’s worse? rear-view mirrors update at half the rate as the rest of the game…do the math.

Visually, it’s best described as “It’ll do”, so I at least expected it to abide by the standards of technical performance. PC owners, relax, drool over Fraps until your heart’s content. Did I mention there’s an extraordinary amount of pop-in with vegetation and trees? While some of the tracks faired okay and everything was rendered as it well, should’ve been, other tracks seemed to be random even if they weren’t as detailed or dense. In certain instances it seemed as though someone had crept onto the track and planted magic beans, leaving me to outrun a horde of wild beanstalks.

The comparisons to be had against DiRT Rally are justified. Both titles release on identical platforms during a similar time, people will be playing one or the other, not both. So where does this leave Sebastien Loeb Rally? Well, given a hypothetical situation where the casual player who buys five games a year seeks recommendation, let’s be honest. DiRT Rally is hands-down superior, but Sebastien Loeb Rally emphasizes a world rally champion.

“Which ever one’s cheaper, mate”.

This game was reviewed on the PlayStation4.

Decent gameplay mechanics, an interesting game mode and a variety of vehicles.

Final Verdict:
FAIR
Sebastien Loeb Rally Evo is a game that's solid with its gameplay and interesting within its content. Competition from other titles however, may prove to be the deciding factor in how long it remains interesting.
A copy of this game was provided by Developer/Publisher/Distributor/PR Agency for review purposes. Click here to know more about our Reviews Policy.