Sega continues trucking on with their digital downloadable re-releases of their substantial back catalogue of classic arcade and console titles, most of which only ever graced on their own legacy hardware. Of recent note, are three 3D fighters developed by their AM2 division, originally running on the proprietary Model 2 arcade chipset. A certain Yu Sukuki, known to be heavily involved with a lot of AM2’s work, was supervising the division and went on to give arcade hits such as the Virtua Fighter and Virtua Cop series. He also helped envision this interactive open-world action adventure about martial arts and sailors, but that’s different story.

What we essentially have here are three 10 year plus old one-on-one beat ‘em ups, brandishing some of the more basic elements you see in today’s more modern fighters. Sadly, you won’t find any 8-way directional movement, sideways tech-rolling, tag battles or super meters to keep your interest. Once you’ve looked past all that, gameplay-wise some of these titles do stand up to the test of time. But which of these will suit your tastes better? 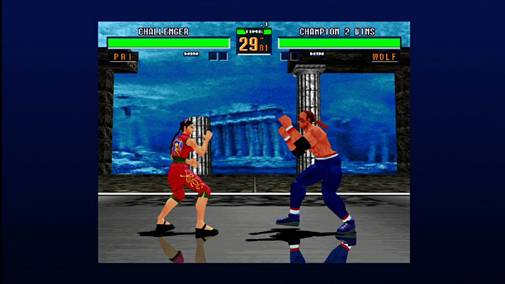 When I was but a youngling, Virtua Fighter 2 was one of my favorite 3D fighters to ever grace the local arcade scene, and was probably the one I spent the most tokens on. This was before Tekken and Soul Edge had came to claim my attention span. And sure, it was no Mortal Kombat or X-Men vs. Street Fighter. But it looked, at the time, downright exciting. It’s deep mechanics and interesting assortment of fighters sucked me in good. Seventeen years later, and it certainly has showed its age. The visual impact just isn’t the same, especially on the character’s plastered facial expressions. Apart from that, animations are still fairly believable.

At least one of the most common criticism I feel one would have over the controls, are the insane leaps of air your fighter can get while jumping. Its a bit unwieldy, but time it correctly, and you can try to use it catch opponents off-guard. While I do miss more modern features like side-stepping, and the character voices are still recorded at lower samples, Virtua Fighter 2’s raw, no-fluff feeling is formidable. 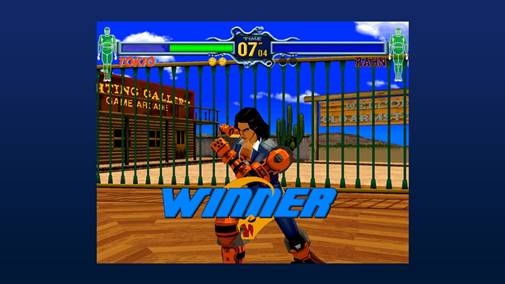 I’d liken Fighting Vipers to Virtua Fighter 2’s wackier, colorful and more upbeat cousin. While it still retains the same three-button layout, Fighting Vipers tosses in a punk-like demeanor, with fighters sporting armored padding. Not just for show, these armors can easily break off when met with enough force, leaving you at a disadvantage if you’re not careful enough (you may recall Namco Bandai’s Soulcalibur IV featuring a similar mechanic). Add to the caged arenas, which also can be broken off when an opponent as been flung hard enough, and you have a very pressure-inducing set-up.

Fighting Vipers is distinct enough in its own right and in some ways, feels a lot fiercer. I would even go on to say that the visuals hold up a lot better, thanks to the somewhat more anime-esque approach to colouring. And there’s just something really satisfying punching a skateboarder through a fence. 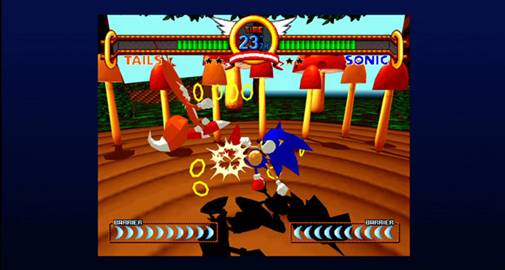 If Fighting Vipers is Virtua Fighter 2’s wackier cousin, I’m not too certain where exactly Sonic the Fighters fits into the family tree. To put it in simpler terms, it’s complete Looney Tunes. You have a whole army of Sonic friends crowding together, all pudgy and proud, pouncing all across the arena. Not quite the predecessor to Super Smash Bros, I assure you. The presentation feels a bit overdone (attacking enemies will have them drop rings each time, or even have their bodies deform), which can result in some confusion when trying to nail down the ebb of combat. As it is, the enemy AI won’t put up much of a fight, so I recommend increasing the difficulty up from “Normal.”

Interestingly enough, Sonic the Fighters is the only game in this list that actually has some semblance of a story. Defeating each fighter will net you an emerald, of which you must collect 8 in order to power a spaceship that will take you to Dr. Eggman’s space station and have you fight Metal Sonic. It doesn’t really make much sense if you put any real thought to it, but I do appreciate what AM2 was trying to accomplish. Sonic the Fighters also has probably the easiest set of achievements I have ever seen in a fighting game. Within 30 minutes of my play-time, I was able to unlock 90 percent of them.

If you’re looking to experience the series that helped define the 3D fighting game genre, you owe it to yourself to check out Virtua Fighter 2 and Fighting Vipers. Sonic the Fighters is something of an oddball, and I would only recommend to diehard fans.

No native wide-screen support, visuals will seem outdated, easy achievements are much too easy to unlock

Final Verdict:
GOOD
If you’re looking to experience the series that helped define the 3D fighting game genre, you owe it to yourself to check out Virtua Fighter 2 and Fighting Vipers. Sonic the Fighters is something of an oddball, and I would only recommend to diehard fans.
A copy of this game was provided by Developer/Publisher/Distributor/PR Agency for review purposes. Click here to know more about our Reviews Policy.