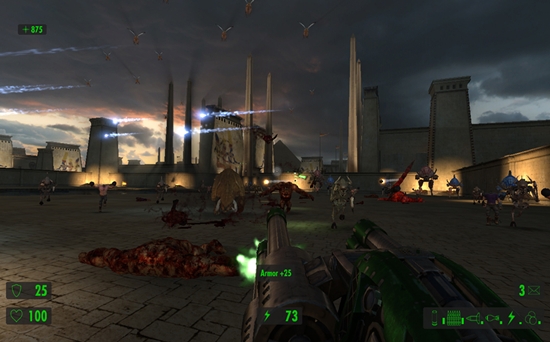 Mastertronic’s Product Director Neil McKenna said: “Serious Sam has been released on over five different formats over a 10-year period, most recently receiving a successful release via Xbox Live. We’re bringing Serious Sam back to the retail market and with recent statistics showing two out of three gamers prefer to buy discs rather than download, and with over 14million Xboxes in Europe and the UK, there’s a huge potential market out there for this title.”

Serious Sam HD First & Second Encounter is a first person shooter with attitude. The series follows the adventures of Sam “Serious” Stone and his fight against the forces of the notorious extraterrestrial overlord Mental who seeks to destroy humanity. Serious Sam offers traditional style first person shooting but with a new take on this familiar formula. Closed-in corridors are mostly replaced with wide-open environments, small groups of enemies are replaced by dozens attacking at any given time. Combat makes up most of the game, with Sam’s only help being NETRICSA (NE uro-TR onically I mplanted C ombat S ituation A nalyser), an advanced computer AI surgically implanted into his skull. NETRICSA serves as an in-game strategy guide, cataloging encountered enemies and weapons, and at the same time providing bits about the background story and hints on how to progress. Ammunition and weapons are plentiful, and guns, for the most part, do not need to be reloaded. Enemy designs often take inspiration from mythology and fantasy, and include anything from flying harpies, to giant bipedal cybernetic monsters, to headless suicide-bombers.