Tomb Raider is back, and this time it’s to close out the reboot trilogy in grand style with Shadow of the Tomb Raider. With the first game in the reboot, we had a chance to see Laura Croft begin her adventure as a young, daring woman set on a quest that could change history. She’s grown up a bit since then, and now she’s set on more than just artifacts, but revenge. We had a chance to talk with Chris Johnston, Brand Manager for Crystal Dynamics at this year’s E3 to ask him a few adventurous questions we’ve been needing answers to.

Are you using this game as an opportunity to set up exciting things for the future of the franchise?

Right now we’re just focused on Shadow of the Tomb Raider, and telling the end of the Lara’s story.

Eidos are working with Nvidia on the new Shadow of the Tomb Raider. What has that collaboration brought to the table?

We’re not talking specifics when it comes to the tech feature. We’re partnering with Nixxes and they’re extremely talented individuals. They share our commitment to quality. You can expect great things when it comes to Shadow of the Tomb Raider PC version.

Shadow of the Tomb Raider is obviously going to have a pretty large-scale narrative, with its very premise centered around the Mayan apocalypse. However, it’s also very much about Lara’s own personal story, about her growth as a character. How are you looking to balance those two? Is there any one thing you’re focusing on more than the other?

The inner conflict is definitely based on Lara, right? Lara’s going to have to understand that the decisions she makes have very big implications. As the stronger and more powerful she gets the bigger ramification of her decisions. That’s something you saw in the demo there.  This race against time, against the other evil, by getting there first, taking the artifact, she inadvertently triggers a Mayan apocalypse. It’s also Lara coming to understand how these decisions are going to impact the world.

You’ve claimed earlier that this is going to be a hard game.

It’s definitely got more tombs. It’s got under water systems. So now we have full 360 degree exploration, where players can find lost artifacts, extra gear. So we’re definitely cranking up the Tomb Raider systems. To answer your question: Yes. There will be lots of challenges in this game.

As far as stealth is concerned, which is obviously a big part of these games, are you going to go for a more systemic-based approach, like what we’ve seen in recent games like Hitman and The Phantom Pain?

Yeah. I can’t speak to those games, specifically. We didn’t reinvent, but we boosted our stealth systems. If you’re caught or detected, and you’re able to retreat and hide for a while, all of the AI will return to their normal patrolling functions. So it allows players multiple attempts in the same areas. But if you still want to go guns blazing, you can still do that, as well.

What makes Shadow of the Tomb Raider dark?

It’s really, again, about Lara’s inner conflict and what she needs to go through. For her to experience her highest highs, she has to experience her lowest low. The path that she follows is what’s going to forge her into the Tomb Raider that she’s destined to be.

Are we going to see any additions or changes to the stealth mechanics?

We’re giving the players new stealth mechanics. So Lara is able to use mud as camouflage. If she’ll find a mud path, she’ll cover herself in mud. That enables her to go into the foliage and hide from soldiers that are walking past her. We also have a lot more verticality in the game when it comes to a lot of the combat scenarios. Players are able to go up into the trees and higher areas, which allows them to become the apex predator from above. 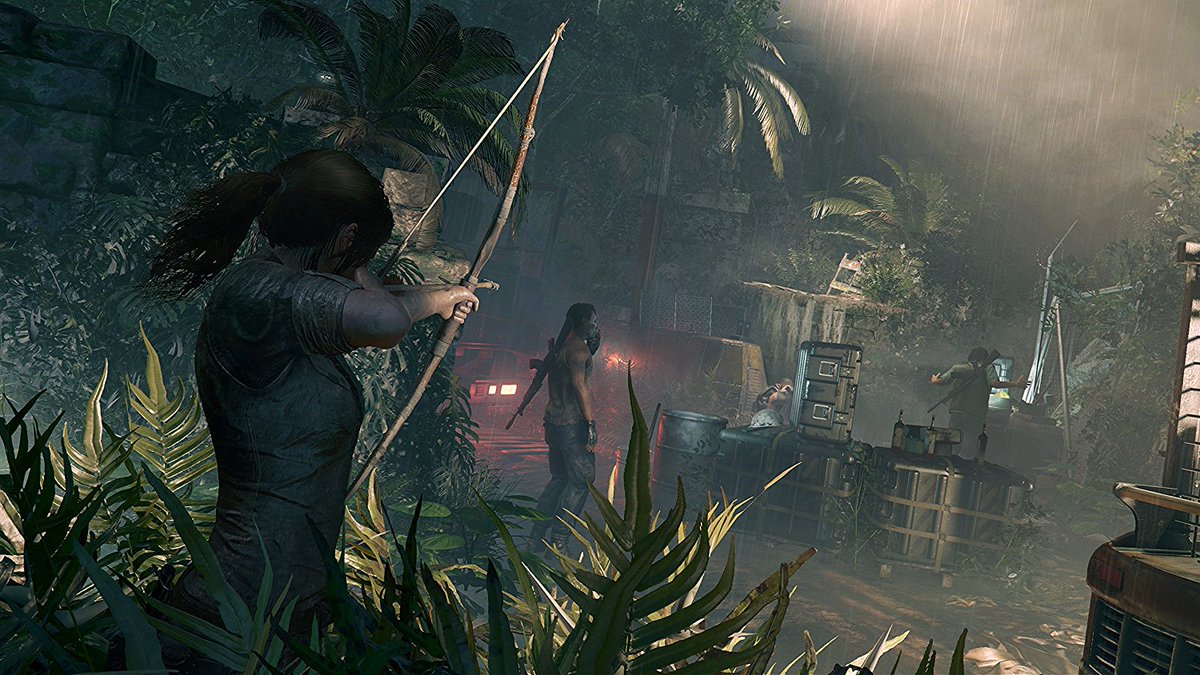 Can you go into specifics on how big the map is?

The hub that we have, the lost city is the biggest hub that we’ve ever created. That’s going to give the players tons of replayability when it comes to challenges and side missions, and picking up lost artifacts and relics.

The game will feature Xbox One X specific enhancements. What can players expect if they are playing the game on Xbox One X? Is it 4K/60FPS?

We haven’t commented on that yet, but it’s probably going to have multiple options, when it comes to 4K at 30fps, then 60fps at 1080p.

From a developer’s perspective, how do you find the Xbox One X to be power wise? With the extra GPU power we’re sure you’re doing amazing things with it.

YYou can see that the game looks awesome. It’s fun to use these new tech engines to push the game to its fullest potential.

How is Shadow of the Tomb Raider running on the original Xbox and PS4?

Do you have any plans to bring the game to the Nintendo Switch, and if not, why?

We have no plans right now. It’s just that our focus right now is on the other consoles.