Since the days of the Greeks we have had heroes questing to save/revenge their women. From the days of Donkey Kong we’ve had a similar thing going on in our video games. In 2,500 years of story telling (and 29 years of gaming) Shank would have us believe that we haven’t progressed very far at all. It attempts to be a fun and slightly gory 2D action romp but, by not going all the way, it just comes across as rushed and confused.

You play as Shank, the appropriately named guy with loads of knives, guns and muscles, who sets off to find those responsible for the death of his best gal, Eva. So in rather typical fashion you run and jump your way to the right side of the screen and kill anyone who gets in your way. Shank has a varied arsenal to help him including his trusty knives, along with various other heavy weapons and guns that he collects throughout his quest. The inclusion of the two melee attacks along with guns, grenades and two grapple options makes the combat fast-paced, fun and surprisingly deep. 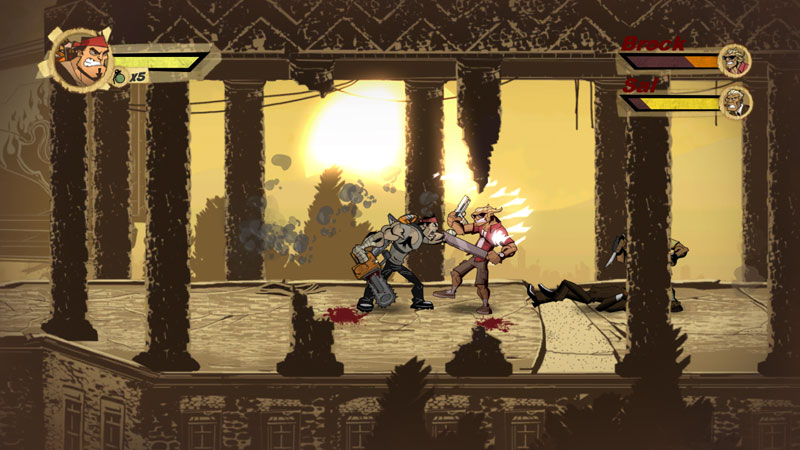 The combat is generally well implemented and can be satisfying when you pull off a cool looking move. It’s not without its flaws though. Various imbalances will see you always using the same weapon set (chainsaw FTW) and a stable repertoire of moves over and over again. It certainly makes the combat become repetitive very quickly when you find a lot of Shank’s weapons and techniques are next to useless. It also doesn’t help that certain enemies also use various annoying moves over and over again. The dogs will always grapple and the gun toting enemies will always just keep shooting so you can’t move until you die a cheap death. And you will die a lot of cheap deaths throughout Shank, especially during some of the later and more frustrating platforming sections. It must also be said of the basic engine that initial load times can take forever and very occasionally would just freeze on me entirely. It did start to really take the piss after a while but, as we only had a PS3 copy of Shank for review purposes, I cannot confirm whether this is an issue with all versions of the game.

Shank generally controls quite well and often feels satisfying, but I get the feeling that it missed a few obvious tricks along the way. You can roll out of the way by moving whilst holding the block button and, whilst this generally works well, it seemed to me that the unused right analogue stick could’ve been well appropriated to an all purpose evade command. In a similar vein are the two grab manoeuvres, the grapple and the pounce, that are assigned to R1 and R2 respectively. The two moves are very similar and the controls could’ve been simplified had the designers had the foresight to map both these actions to one button. These are small criticisms however as generally the controls work well in Shank and never get in the way of the over the top action.

The single player campaign sees you control Shank during the onset of his revenge quest, with a narrative composed largely of flash backs that explain our heroes motives. Unfortunately, the story’s generic and backward attempts at revenge tragedy permeate the single player experience to the core, and the ridiculous amount of gore and the seriousness with which the story unfolds seemed to utterly contradict the comic strip art style. It seemed to me like an attempt to please everyone that has wound up pleasing no one instead. The attempts to “grit up” the characters through foul language and mindless violence is immature and generally insulting to any gamers with an IQ higher than seven. I’m not such a prude to the point where I believe all games must be an artistic attempt to enrich the soul, but when I actually start to feel like the game I’m playing is making me less intelligent minute by minute, I realise that there is something seriously wrong here. I could see that they were going for an ironic and stylised Grindhouse vibe, but it just isn’t taken far enough and seems out of place as a result. 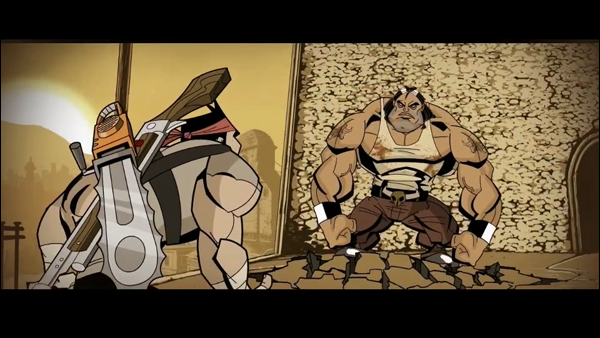 Two muscle bound gents stare at each other with intensity. Either this is a wrestling match or a Freudian nightmare

A local co-op story has been included that details the back story behind Shank’s revenge, where one player inhabits our protagonist, while the other controls his partner in crime, Falcone. The story seemed much clearer and concise in this mode and the mood was lighter and jovial, to the point where I actually found the irony and humour began to come through. The level design also seemed a bit stronger in this mode, although the larger amounts of enemies meant that there were many times where you just couldn’t make out what was going on. I enjoyed the hectic nature of the two player combat, but sometimes enough is enough. It would’ve been easily rectifiable if they’d either put names above the character’s heads or coloured rings at their feet; any way just to distinguish who was who. Sadly this wasn’t thought of, and the multiplayer campaign features many frustrating deaths as a result that detract from the experience. I must highly commend the multiplayer for including local play, but the lack of online co-op was slightly disappointing. That said, I’d rather have it with no online play as opposed to no local.

The art style at a glance has a very vivid comic book style, that adds a dose of visual intrigue to Shank. There are a lot of interesting techniques during the single player that fit into this aesthetic, such as split panels showing your movements on one panel and an escaping boss on the other. The animations too, are bold and over the top and complement the stylish combat well. Aside from a few bland textures and levels, it’s hard to deny that Shank is really stunning graphically. It’s just a shame then that the mood and tone of the single player seemed so at odds with the strong art direction. 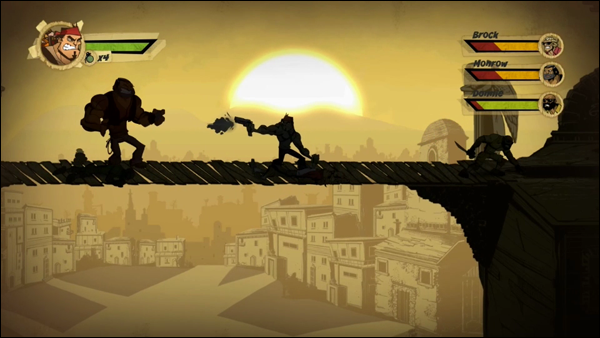 The graphical style of Shank is quite arresting, with some interesting visual flairs

It’s a shame the sound seems so uninspired in comparison to the graphics in Shank. The background music has a generic blues rock theme and, even though the music isn’t bad, it’s a highly derivative affair. The sound effects do a good job of raising the bar and generally add a very satisfying edge to each kill, but the whole package is marred by the generic and dull voice acting. You can try and act as macho as you want, but the more you ram it down our throats the more it seems like you’re overcompensating.

For a whopping 1200 Microsoft points/$15 it’s questionable whether or not there’s enough content in Shank to justify the purchase. The two campaigns are both fairly long and offer enough challenge that, depending on your skill level, you may find the game time totalling 8 hours or more. That said, aside from a harder difficulty setting, there is absolutely no reason why you would want to play through either campaign more than once. It’s doesn’t help that the achievement/trophy list is fairly simple to attain and really quite unbalanced as well, favouring the “kill x amount of bad guys” routine far too much.

Shank tries to take a different line on the 2D brawler, but it inevitably comes up far too short to make it an easy recommendation. The limp story and lame characters define why games are still being fobbed off as a juvenile medium, but by comparison the gameplay is really solid and actually a lot of fun provided you can ignore a few cheap deaths here and there. Inevitably I couldn’t help but feel disappointed with Shank, but if you just want to cut loose (no pun intended) and kill some AI dudes then you may well have some fun with it if you can ignore the story. With a free trial on XBLA and PSN, Shank is certainly a case of a game that you should try before you buy.

Confused art style makes the story seem too serious, Unbalanced moves can lead to frustration, Too hectic in co-op, Can get very repetitive, Long loading times on PS3

Final Verdict:
FAIR
Shank attempts to infuse fun and blood curdling 2D beat 'em up action with an ironic cartoon aesthetic, that fails to go all the way into Grindhouse, and just comes across as confused and far too serious.
A copy of this game was provided by Developer/Publisher/Distributor/PR Agency for review purposes. Click here to know more about our Reviews Policy.