SharePlay on PS4 Seems To Be Region Locked in Germany

But only in Germany. 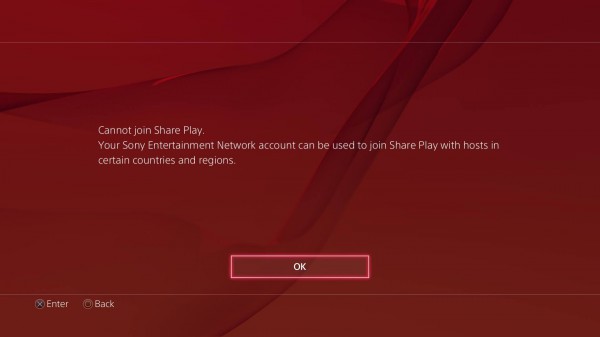 SharePlay is an amazing feature, that essentially lets you digitally share your game library with another player who owns a PlayStation 4 via internet streaming. Obviously, it comes with some restrictions (a cap of 720p and 30FPS), but honestly, that’s a very small price to pay for what is such a cool feature.

Unless you live in Germany, that is, where this feature seems to be substantially less cool. You see, German players are only allowed to SharePlay with other players from Germany. What this means is that you can’t play, or let another user play, games unless all parties involved are German (assuming you live in Germany).

Given Germany’s stronger censorship laws for video games, it makes sense, but still, it’s a bit of a bummer. It’s also a little scummy of Sony to not have actually come out in the open and made this very clear beforehand. But hey, it’s a free service, it works as promised, and if German PS4 players want to get mad at someone about this situation, Sony is probably not who they are looking for.