Do you know where I can find some sailors?

Few games and franchises in this industry have seen as much of an outpouring of love and devotion as Sega’s Dreamcast classics Shenmue and Shenmue 2 have. Originally released two decades ago, with the second game later being ported to the original Xbox as well, these action-RPG-life simulator hybrids have developed a strong and devout niche for themselves over time. With dreams soon becoming reality and Shenmue 3 being an actual tangible thing we can all look forward to in the near future, now seems like the perfect time to revisit the classics that lead into the highly anticipated sequel, and with this newly released collection of ports, Sega has graciously given us the opportunity to do that. Do Shenmue 1 and 2 stand the test of time, or would you be better served operating forklifts elsewhere?

Perhaps the most important thing that needs to be kept in mind while looking at Shenmue 1 and 2 HD is that these aren’t remasters, as Sega themselves have stated explicitly prior to launch. Rather than touching up and modernizing most, if not all aspects of the experience like remasters are supposed to do, D3t have instead merely ported over Shenmue and its sequel to current-gen systems. Beyond some light, cursory work done on improving a few visual aspects of the two games, everything else in the entirety of both the experiences has been left almost completely untouched, so Shenmue 1 and 2 feel and play almost exactly like the original releases with sincere faithfulness. 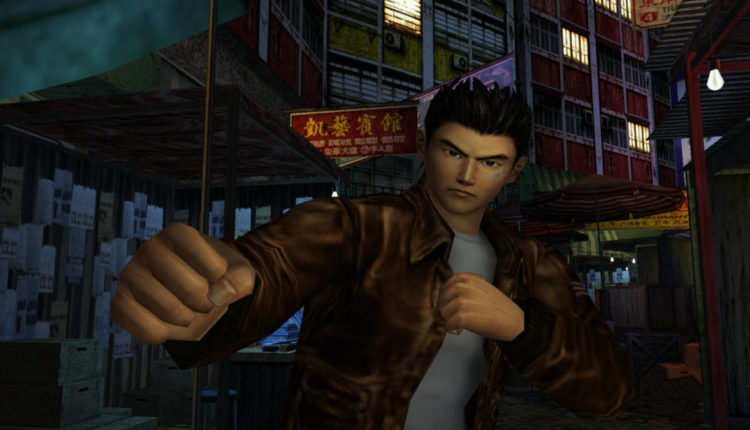 "Beyond some light, cursory work done on improving a few visual aspects of the two games, everything else in the entirety of both the experiences has been left almost completely untouched, so Shenmue 1 and 2 feel and play almost exactly like the original releases with sincere faithfulness."

As a result, for those who played and fell in love with these titles two decades ago, jumping back in should prove to be no problem at all. Readjusting to the eccentricities and design issues that were par for the course back when Shenmue 1 and 2 first launched will surely take some time, but since none of the issues present here would be new, that shouldn’t be a hurdle that seems insurmountable. As anyone who’s played Shenmue or its sequel would tell you, there’s a unique charm to these games that hasn’t ever been replicated in any other game. While modern open world games feel the need to hold the player’s hands along every step of the way, Shenmue 1 and 2 instead challenge you to live and breathe in their worlds like you were truly part of them. If there’s a certain place you need to head to to complete a task, you get no help from mini maps or compasses or pointers in any form.

Instead, you have to explore the open world, read signposts and boards in the environment, ask people for directions, and accrue clues from your surroundings. If ever any of that doesn’t appeal to you at any given moment, going to the arcade and playing some lovingly recreated Sega Arcade classics, or just playing a surprisingly addictive round of darts, is an extremely viable – and enjoyable – option. At their core, Shenmue games challenge the players to completely submerge themselves in their worlds, to absorb every tiny detail, the result of which is two games that are so thoroughly immersive, it’s hard to think of anything else that hits these same heights, even today. With both Shenmue 1 and 2, within a few hours you will likely have memorized major landmarks, directions, and locations, making you feel truly at home, and navigating through these areas and digging through to your next objective almost becomes muscle memory.

This core gameplay loop, once you get into it, is hard to get out of, and those fundamental pillars of the experience remain as strong as ever. With Shenmue 2 especially, that feeling of engagement becomes even more heightened. The setting of 1980s Hong Kong in the sequel is inherently more interesting than that of its predecessor, since not only is it larger and offers more to look at and learn about, but also because it plays host to a much more versatile and interesting variety of activities, with more part time jobs, more mini games, and the like. Shenmue 2 is also a much better paced game in general, and although it’s very much focused on getting players to become deeply intimate with their surroundings just as its predecessor is, it does a far better job of breaking the monotony with interesting activities and a regular stream of events in the story that keep things moving along nicely. 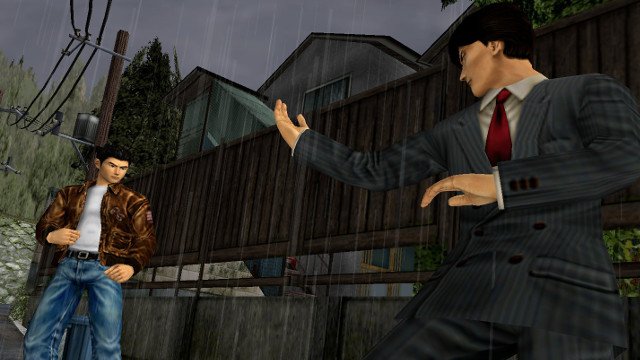 "While modern open world games feel the need to hold the player’s hands along every step of the way, Shenmue 1 and 2 instead challenge you to live and breathe in their worlds like you were truly part of them."

However, for those who completely missed out on these two games back when they first launched and are taking this opportunity to see what the fuss is all about – of which I suspect there might be a fair number of people – things could be slightly more complicated. That’s because the aforementioned gameplay loop is not exactly easy to get into, especially if you’re completely new to these games, and are going in with tastes and expectations that have been shaped by contemporary experiences. For the most part, video games in today’s day and age revel in moving at a brisk pace and throwing players for a loop on a regular basis- Shenmue, on the other hand, is all about absolute immersion, about taking things slow, about absorbing all the details. There’s a very good chance that if you’re playing these classics for the first time ever, that slow pace and the monotony might put you off. The fact that several prominent aspects of both the games simply haven’t aged very well, from their often unintentionally hilarious writing, to the wooden dialogue, to some occasionally jittery animations, might also contribute to that.

In spite of this not being a remaster, Shenmue 1 and 2 have both received some visual upgrades, which I mentioned earlier. Colours look brighter, with much better contrast than the original Dreamcast releases, things such as shadows and shapes are better defined and look crisper, the environments are bursting with sharp details that can be appreciated even from a distance, while things such as foliage and clouds in the sky boast far more detail than they did two decades ago. Everything is just much less muddier and a lot sharper in general, and though all D3t have essentially done is touch up all the original assets in both games to bring them up to 1080p resolutions, the resulting change is quite visible, and very much appreciated. There are a few pop ins every now and then, and I came across a glitch in Shenmue 2 that froze a section of the UI and prevented it from reacting to changing situations, but none of these issues are terribly intrusive in any way.

One area that definitely could have used similar polishing is the quality of the voice overs, but sadly, this is an area where Shenmue 1 and 2 HD finds itself noticeably lacking. Essentially, the very same heavily compressed audio files that were used in the original game have been taken and reused wholesale- or that’s what it sounds like at any rate. Sound quality during voice overs is unclear and simply not up to the mark, and some slight work to make improvements in this area would certainly have gone a long way, especially since the restrictions that called for low quality audio twenty years ago are no longer a factor. Additionally, while both Shenmue 1 and 2 obviously run in wide screen aspect ratios now, cinematic cutscenes in both games are still played in a 4:3 aspect ratio, for whatever reason. This letterboxing becomes even more pronounced in Shenmue 2, where black borders around the screen are even more prominent. It’s not a deal breaker, but it can certainly pull you out of the experience sometimes. 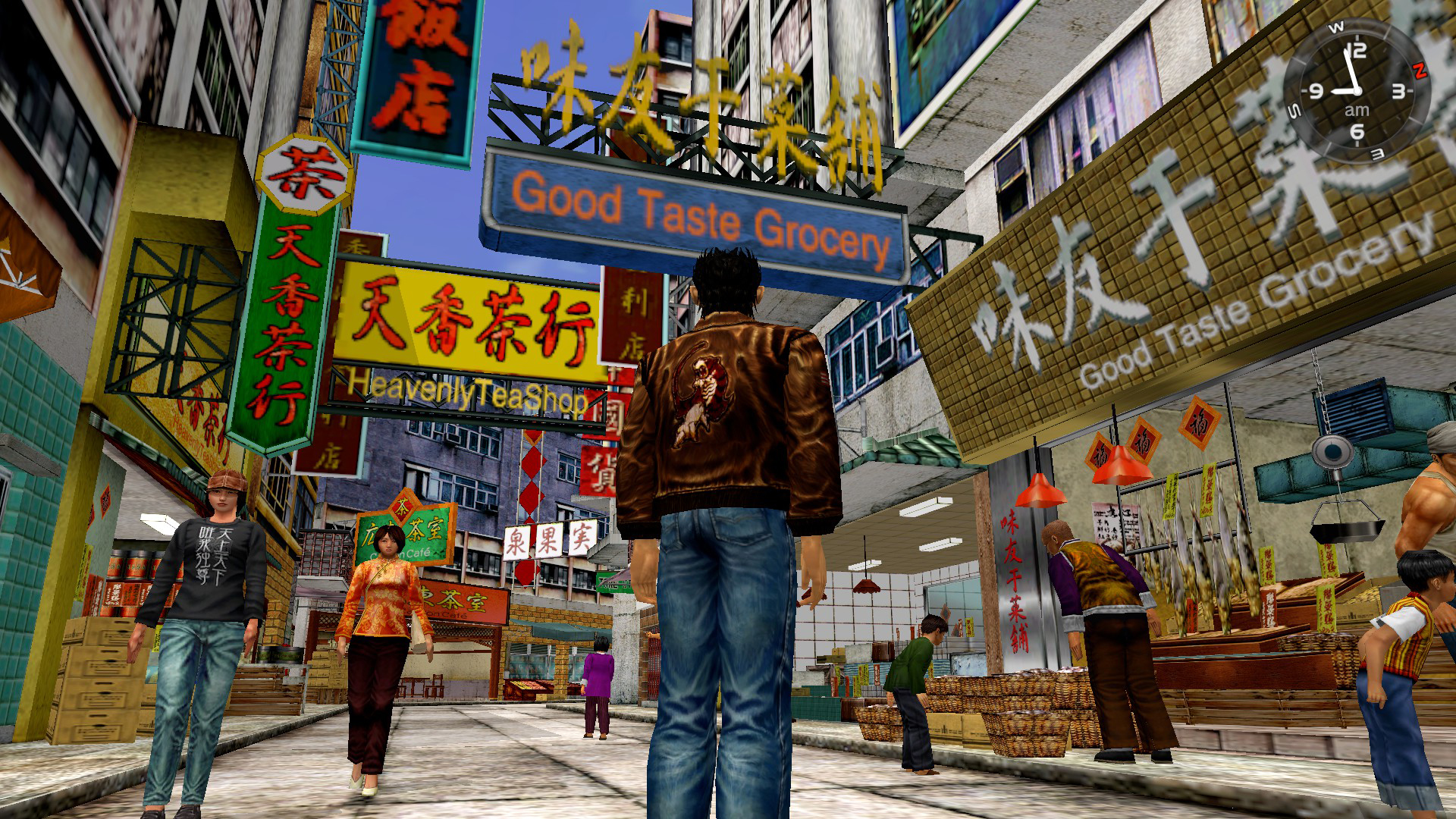 "Everything is just much less muddier and a lot sharper in general, and though all D3t have essentially done is touch up all the original assets in both games to bring them up to 1080p resolutions, the resulting change is quite visible, and very much appreciated."

Another area where at least some level of reworking or optimizing would have been appreciated is the controls. Though analog sticks can be used in both games for the purposes of movement and controlling the camera, the control schemes themselves are still very much based on D-Pad functions, which means movement is still digital, just mapped to the analog stick. This also means that movement and direction changes are both handled by the left analog stick. In and of itself this would not be as much of an issue, but camera control is tied to the right stick, which leads to something of a mishmash of control options. As a result, Shenmue 1 and 2 often end up controlling a bit awkwardly, making simple traversal, or even things such as turning in a particular direction, feel quite inaccurate at times. It’s not a game-breaking issue by any means, but it can take some getting used to.

It’s a testament to the timeless quality of Shenmue and Shenmue 2 that despite these issues, I don’t find it hard to recommend their HD ports. Sure, some aspects of both games haven’t aged as gracefully as others, while the lack of optimization in some deficient areas is also felt, but the inherent strengths of both games that created a legion of devoted fans twenty years ago still shine through. Newcomers might find it a little harder than veterans to get into the groove, but I recommend trying to get past the hump nonetheless. As we gear up for the long-awaited release of the third instalment in this tale of revenge, Shenmue 1 and 2 HD looks like the perfect excuse to jump back into these veritable classics.

The core strengths of Shenmue 1 and 2 continue to shine brightly, with strong and immersive world design and addictive side activities; Convenient way to catch up with – or revisit – the first two games; Visuals have received a noticeable boost.

Final Verdict:
GREAT
Despite a lack of optimization in needed areas and some aspects of both games that haven't aged very well, this collection presents a good excuse to jump back into Shenmue 1 and 2, both of which remain inherently engaging games even today.
A copy of this game was provided by Developer/Publisher/Distributor/PR Agency for review purposes. Click here to know more about our Reviews Policy.