Games like Forza Motorsport and Gran Turismo have basically dominated the GT/Racing Sim genre, but with new names like DiRT, MotoGP, F1 and GRID, the future for the genre looks competitive and strong, to say the least. A few years ago, when the Need for Speed series was all but destroyed, with one mediocre entry after another being released practically every year, Slightly Mad Studios gave the NFS series a new lease of life. They released Need for Speed: Shift, a GT/Street Racing/ Racing sim game, which, although had many faults of its own, was still a very enjoyable game, and a huge treat for all NFS fans (or the few that were still left), especially after the last few disastrous years.

Hot Pursuit (2010) saw the series returning to its roots, with its fast paced, flashy gameplay again, but now, Slightly Mad Studios is back with another installment to the franchise. Is Shift 2: Unleashed the next big competitor to GT and Forza as many are making it out to be? Does it improve upon all the mistakes from the original Shift? Is it worth your time and money? 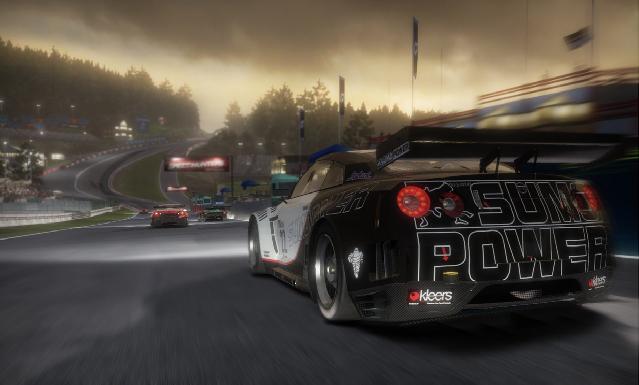 The game looks brilliant. IS it brilliant?

Plain and simple answer: yes, it is a very enjoyable game. It does have a few minor flaws, some that hamper the overall experience and stop it from being the fierce Forza/GT rival it had the potential to be, but overall, Shift 2: Unleashed is a damn good game.

Shift 2: Unleashed cannot really be described as a game of a particular genre. It technically should be a racing sim, but it has an equal number of elements for it to be classified as an arcade racer. For one, its handling can be a bit finicky at times- finicky if you are playing it as a racing sim, but thrilling and exciting if you’re playing it as an arcade racer. Turning around corner is unpredictable, which means you will almost always be on the edge of your seat. Sometimes, drifting and steering can be as crazily fun as in games like Hot Pursuit.

However, this takes away from the racing simulator feel of the game, making it feel less real, and more arcade, which means some might automatically strike it off as competition for Forza or GT. But that doesn’t really matter when you see just how fun Shift 2: Unleashed really is. It has awesome races, some of which will make sure you are glued to your seat.

What adds the most to this “awesomeness” of the races, and to the fast-paced, thrilling nature of the game in general, is the amazing sense of speed. Every time you hit the fifth gear, and your speed reaches over a couple hundred kilometers per hour, the sound that the cars make and the way the environment just blurs around our vehicle gives us excitement enough to match a shot of adrenaline. You get an amazing sense of speed, with the revving up of the engine, the blurring of the trees and the stands around you, it all just feels and sounds… exciting. That’s the only word for it.

Add to that the constant threat of crashing and totally smashing your car into little bits and pieces, and you are always tense, your heart always pumping. And make no mistake, the damage effects are absolutely brilliant. Just for the fun of it, please just crash your car into the boards on the side of the road, or turn your car suddenly on high speed. Not only are the animations impressive, it can give you sadistic pleasure to watch little scraps of metal and plastic flying through the air as your vehicle crashes. It sure looks ugly after that, but I think even loosing the race is worth watching how your vehicle gets wrecked. And it’s best viewed from the helmet view. 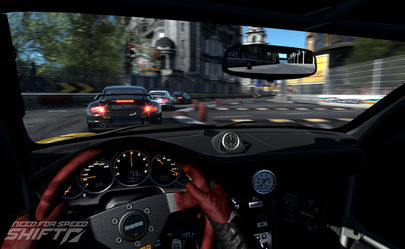 The cockpit view in Shift 2: Unleashed is the best ever in any racing game.

Oh, the helmet view. There just aren’t enough words with which I can describe how freaking awesome the helmet view was. And trust me, I know a lot of words. Not only does the helmet view make the crashes a whole lot better and more… frightening, it also gives the game a deeper sense of authenticity. The dashboard can be fully viewed with the help of this mode (obviously), and it looks great. Your jaw will drop. It’s so detailed, and the developers have paid attention to every tiny little detail, that if it were in 3D, you would have almost though you were in your own car. Without any doubt, the cockpit view in Shift 2: Unleashed has to be the best in the series.

It is these very crashes, however, that prove to be frustrating in the long run. If you crash near the end in one of the longer races in the later stages of the career mode, you would have to replay the entire race all over again. It can be very frustrating, and it makes the omission of a rewind feature a baffling one, seeing as almost all racers these days have the rewind feature. The faulty and non-responsive controls don’t help much either, and you will probably have to go ahead and buy the steering wheel accessory, which is nothing but extra money spent on a single game.

One of the many things that return from last year’s Hot Pursuit to make up for such flaws is the amazing Autolog feature. Having already been sold over the feature with its incredible implementation in Criterion’s entry into NFS last year, Slightly Mad Studios tweaked it a little bit and added it into Shift 2, which proved to be one of the best things they could have done. While it doesn’t work out quiet as well as it did last year, the Autolog feature is still great fun, and it lends a great deal of replay value to the game, making sure you keep coming back to it. What also helps in making the game more replayable is the revamped experience system, which has been heavily improved over the original Shift. It still needs a bit of polishing in some areas, like making it more expansive with the stuff we do all throughout the game and the achievements we accomplish, but that doesn’t mean it isn’t fun as it is.

The graphics are great as well. The car models look neatly detailed and the tracks are beautifully rendered. The interiors of the cars, as mentioned above, are jaw-dropping as well. The visuals and the animations are crisp and highly detailed, with little to no room for improvement. 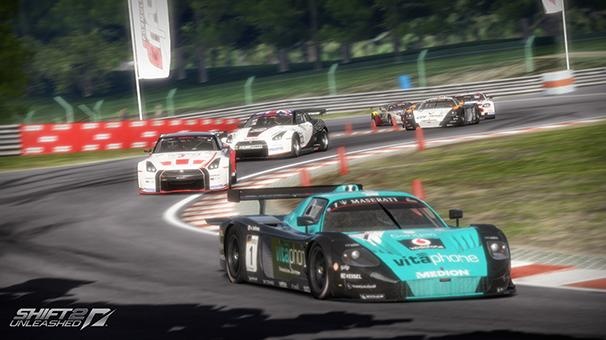 Shift 2: Unleashed, ultimately, is a great game. It’s a game with fast, thrilling races, beautiful visuals, great authenticity sometimes and the pure arcade fun sometimes. It has some flaws, and it surely wouldn’t hurt to polish them, and maybe give the game a definite identity. Right now, it’s basically stuck between arcade and simulator, which can be confusing for some of the players. Just fix the huge errors from this game, and we will have a Forza/GT/F1/What have you killer on your hands.

Great car models; Helmet view is awesome and lends a whole new level of immersion to the game; Sense of speed is great; Handsome looking game; Tracks are really well designed; Autolog feature lends a great deal of replayability to the game; Damage effects are awesome, it can be really fun to see your car wrecked

Elements like handling not as good as they should be in racing sims; Still not good enough to beat Forza or GT; Default controls are not very responsive; Lack of rewind feature can be frustrating

Shift 2: Unleashed may not be the Forza or Gran Turismo competitor everybody was hoping it to be, but it is a damn good game, with a lot of really enjoyable moments.

A copy of this game was provided by developer/publisher for review purposes. Click here to know more about our Reviews Policy.
Tagged With: EA, Need For Speed, pc, ps3, Shift 2, Shift 2: Unleashed, Slightly Mad Studios, xbox 360