Die to Matador again, this time in HD.

Nocturne begins with the end of the world. Your character and some friends are summoned to a creepy hospital by a teacher, things get extremely weird and then go very sideways, the world ends in an event known as the Conception, and you’re reborn as a demon. All in a day’s work for a JRPG protagonist, sure, but the speed at which Nocturne accomplishes all of it is breathtaking, and the reason I feel comfortable talking about it. It’s not a spoiler; it all happens within the first couple hours. Besides, Nocturne is nearly 20 years old. Spoiler territory this ain’t.

Once demon-ified, your silent protagonist high schooler – who is known as the Demi-fiend – is tasked with remaking the world. Again, a pretty normal day for a JRPG protagonist, especially one in an Atlus RPG. Once the stakes are established and you’ve run into the other major players, several of whom have the same motivation as you and very different ideas about what a new world should be, you’re kind of turned loose to do your own thing. 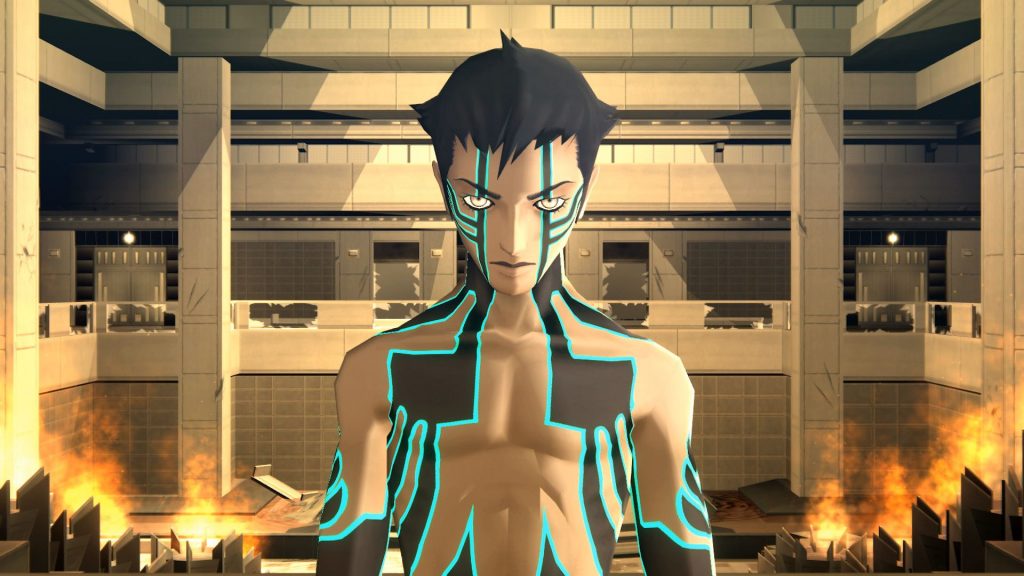 "Most of the time, Nocturne feels like a very dark Pokemon game. You travel the world, collect monsters, and use them to fight."

Shin Megami Tensei may be what spawned the Persona series, but Persona it is not. Instead of a grand adventure built around a party where the overarching plot is paramount, Shin Megami Tensei is more about individual scenes. Between them, the player is more or less free to do whatever they want.

Mostly, what they’ll do is run around and get into combat, acquiring new demons to fit into their party as they do so. Unlike the Persona titles, there are no permanent party members in Nocturne who are not the Demi-fiend (with one notable exception), so recruiting demons to fight alongside you is crucial. Most can be recruited by talking to them in combat and handing over money and items, and then answering a couple questions correctly. Most of the time, Nocturne feels like a very dark Pokemon game. You travel the world, collect monsters, and use them to fight.

It’s good that the combat is the star of the show, then. Nocturne’s combat is turn-based, with each side assigned a number of Turns that generally corresponds to the turn of units on each side. Each action typically takes a single Turn. After exhausting every Turn, control switches to the other side. Hitting a monster with an attack they are weak against, landing a critical hit, or passing your Turn to another party member, however, only uses half a Turn, allowing you to chain together several more moves than normal if you play your cards right. Land enough of the right hits and you can prevent enemies from having a turn at all, but there is a catch. Using an ability an enemy can absorb or missing an attack will take two Turns from you, so the margin of error is pretty low. 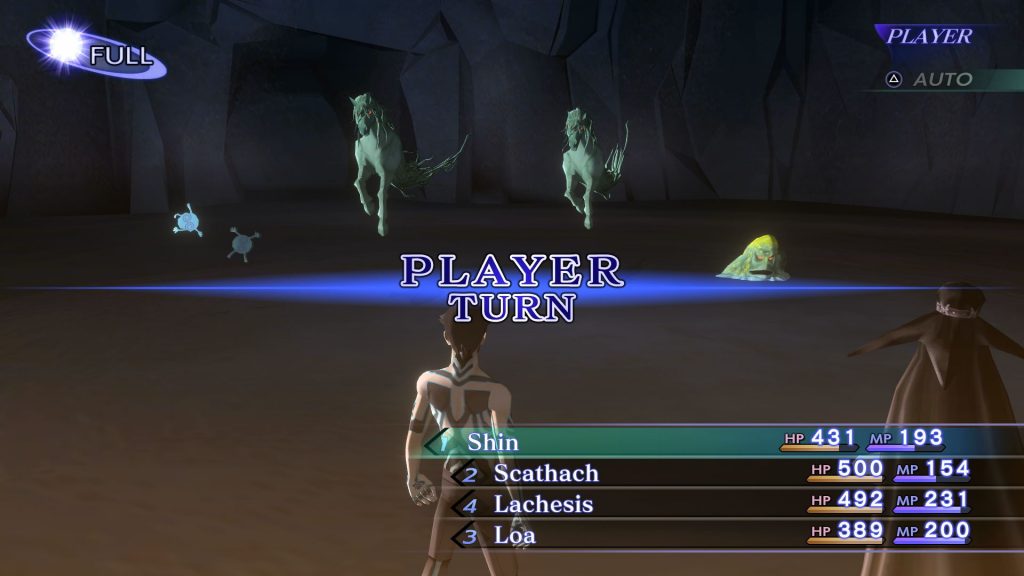 "The remaster does help, adding a much-needed suspend feature that allows you to save and quit even if you’re not at save point, as well as a Merciful mode that tones down the game’s difficulty."

Naturally, learning weaknesses and exploiting status effects are important, so having a good group of demons with diverse skill sets at your command is paramount. Like Pokemon, some demons evolve, but most are more useful when they’re fused together to make a stronger demon. Fused demons can even carry over some of their old skills. The Demi-fiend is no slouch, either, consuming items called Magatama to determine what skills to learn and boost specific stats. Magatama can be changed out at any time, allowing the player a great deal of freedom to build their Demi-fiend’s skills and stats as they play.

It’s all pretty complicated, though the game’s easy enough at the outset. It’s not until the player runs into the Matador, the game’s first true boss fight, that they’ll likely understand how little they understand the game’s systems. Nocturne can be an unforgiving game, but it’s rarely an unfair one. It does, however, expect you to learn how to play it, and will treat you accordingly if you don’t.

The remaster does help, adding a much-needed suspend feature that allows you to save and quit even if you’re not at save point, as well as a Merciful mode that tones down the game’s difficulty. The rest of the remaster’s additions are more standard fare: models and textures look better, and there are both English and Japanese voice over options, subtitles in German, Italian, and Spanish. 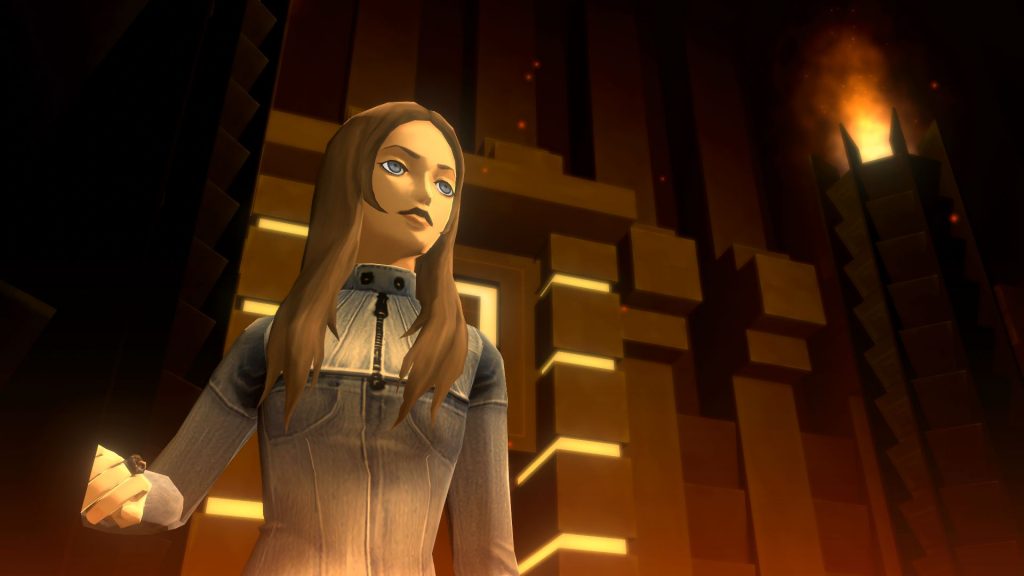 "The remaster is extremely faithful to the original PS2 release, for better or worse. While that means preserving the original’s brilliant art, deep combat, and wonderful soundtrack, it also means that this feels very much like a PS2 game. "

The remaster is extremely faithful to the original PS2 release, for better or worse. While that means preserving the original’s brilliant art, deep combat, and wonderful soundtrack, it also means that this feels very much like a PS2 game. The world often feels empty, even for a post-apocalyptic setting, and I can’t count how many times I entered a small room to find a single NPC with one line of dialogue and nothing else. Doubtless much of this stems from its origins as a PS2 title, but it can be jarring for someone new to the game.

Still, the game holds up remarkably well if you can get over its difficulty and lack of plot. If I have one criticism of Nocturne, it’s this: the game does a very poor job of teaching you how to play it. It’s easy to breeze through everything before the Matador fight without using any of the game’s interesting systems. While Nocturne does mention things like fusion and how the combat system works, it generally doesn’t show you how to or require you how to use them until you get to the Matador fight, at which point the difficulty curve skyrockets. Matador is really where the game starts, but it’s easy to imagine players getting bored before then or quitting when they get there because they don’t understand what to do. I’ll be honest: had I not had to play the game for review, I probably would have stopped a few hours in because of how dull the opening hours are. All of that changes once you get past Matador, but you have to get there first, and that will take most players several hours. And then you have to fight him. For most players, that will likely be extremely hard, and many will probably quit there, even with the option to lower the difficulty.

So the question remains: is the HD Remaster worth it? It’s undoubtedly the best version of Nocturne, and the new additions are welcome touches. If you can get past the game’s obvious PS2-era origins, barebones plot, rather boring tutorial, and extreme difficulty curve, you’ll likely have a good time. The combat, art, music, and setting are that good. If not, Nocturne will remain little more than a curiosity, the most famous part of the series that spawned Persona, a remnant of a past world, much like the Demi-fiend himself.

Everything looks and sounds good. Merciful is a nice addition for folks who just want to see the story. A deep and engaging combat system. The suspend feature is great. Voice acting is a good addition.

The tutorial does a poor job of teaching you how to play. The game's opening is pretty long and rather dull. An unforgiving difficulty curve. The world often feels empty.

Final Verdict:
GREAT
Nocturne's PS2 origins are obvious, but players who can get past the intense difficulty curve and barebones plot will find a great RPG that rewards mastery of its combat systems.
A copy of this game was provided by Developer/Publisher/Distributor/PR Agency for review purposes. Click here to know more about our Reviews Policy.