SHiRO 011 Interview – One Shot, One Kill

Multiplayer shooters have settled into a rhythm by now- we expect a certain few fundamentals to be present in every game of the ilk, and more often than not, what we expect is what we get. With SHiRO 011, currently in early access, developers BARS Studios are looking to provide something fresh and different, a game with a unique aesthetic and a unique gameplay feel that they hope will help it become “the Rocket League of shooters”. We recently sent across a few of our questions about the game to the developers- the following questions were answered by BARS Studios’ founder Dave Bars. 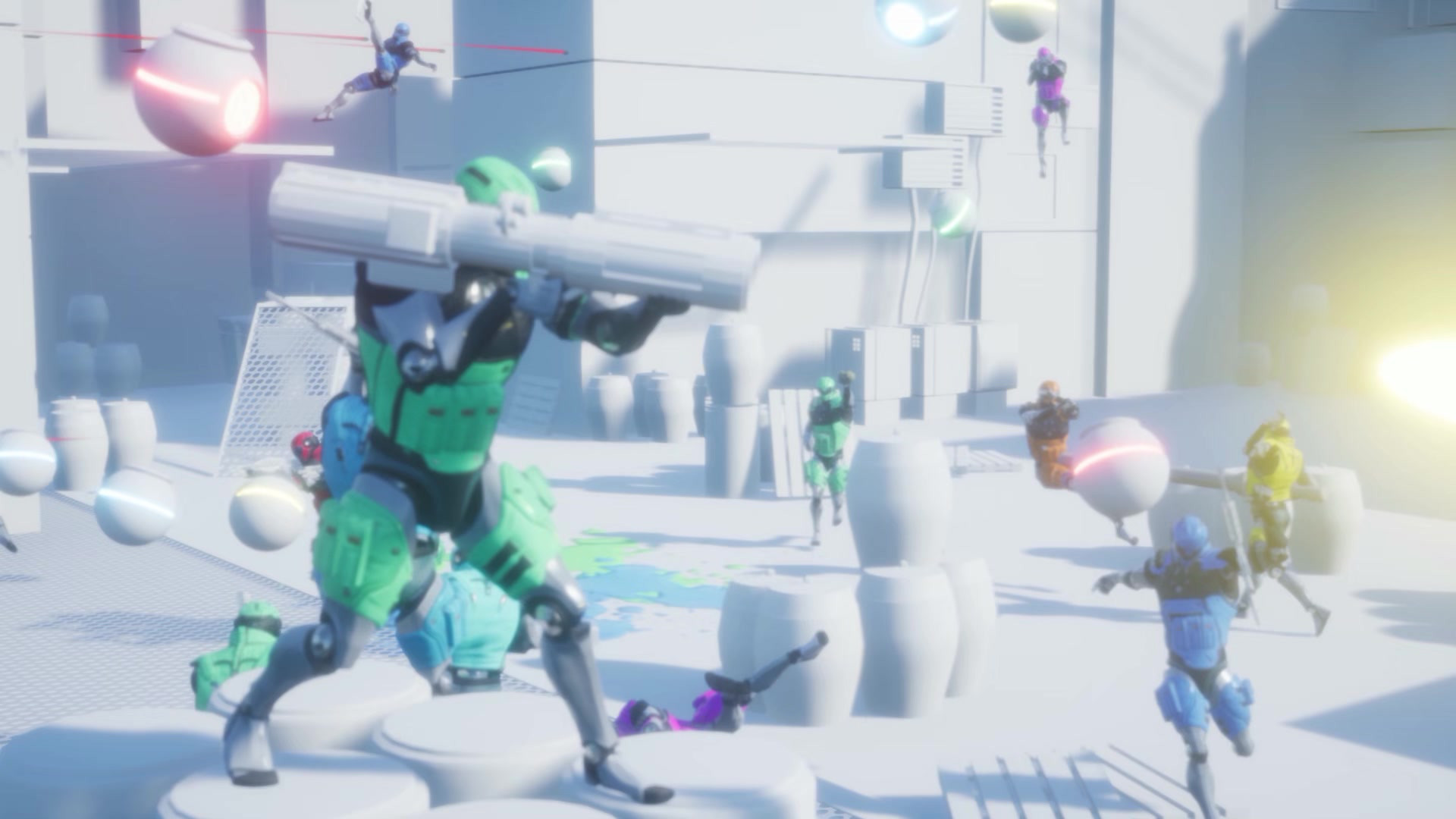 "The “one shot – one kill” mechanic was one of the very first things that we knew we wanted to have in our game."

What do you think SHiRO’s unique, uneven team compositions add as far as the flow of matches is concerned? Do you think it hampers balance and competitiveness?

We allow uneven team compositions because we want to give players the possibility to play however they want. Originally we implemented this, so visitors at game conventions could challenge both developers in a 2v4 match. If they won, they got the game for free.

How did the “one shot-one kill” idea come about, especially seeing as we hardly see stuff like that in online shooters?

At first we thought that this mechanic would make it hard for beginners to get used to it, but the exact opposite is the case. Because unlike other shooters, you don’t have to aim at your enemy a certain amount of time to get multiple hits. One lucky shot is enough to get a kill.

Can you speak to us a bit about how exactly bullet time functions in the game, seeing as that too is something that one wouldn’t ordinarily see in an online game?

We thought a lot about how we would implement bullet time in an online shooter, especially without damaging the fast paced dynamic in this game.

Every player has the ability to create a Timesphere, which slows everything within the sphere. This can be used to dodge bulletstorms coming in your direction as an assist to hit the opponent, since it gives you a small but essential speed advantage. The combination of the one shot one kill and bullet time mechanics gives this game this unusual and unique shooter experience.

Everything we’ve seen of SHiRO so far suggests that you’ve purposefully set out to create something that’s different from everything else in the market- is that a fair assertion?

We would like to see SHiRO 011 as the Rocket League of the shooter genre in the future- focusing on some basic elements and improving them to perfection over time.

So yeah, it’s something different and we are not trying to become a shooter that already exists. SHiRO 011 is a game where every kind of player can have fun, and it doesn’t matter if you’ve played shooters before or not.

Nevertheless, we were very surprised once we saw Counter-Strike, Call of Duty, and Halo e-sports players play our game for the first time and dominate it. 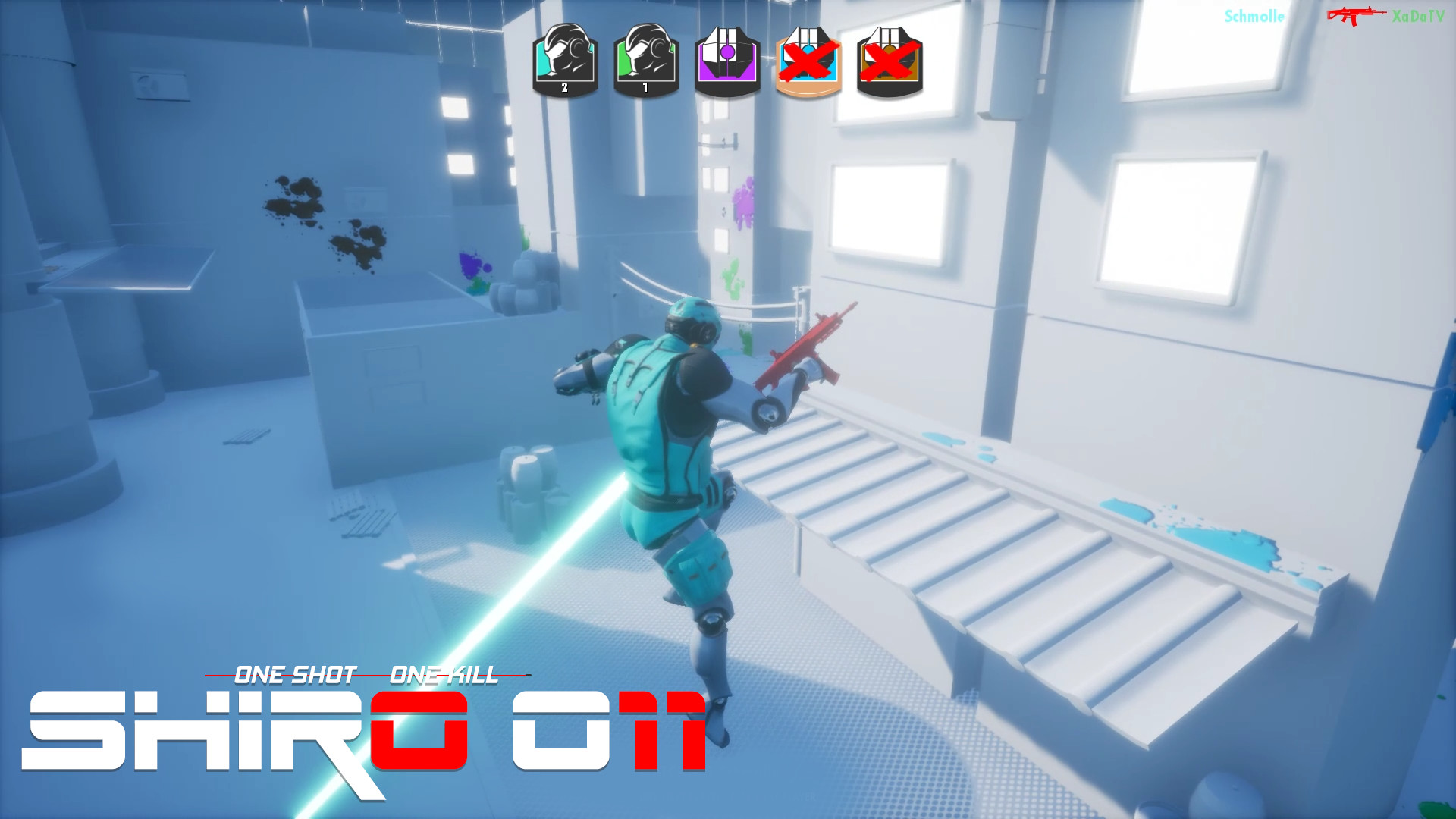 Do you have any plans for the immediate future to add major new modes, content, or features to the game?

We do have great plans for SHiRO 011, but it will take time because we have to enlarge our development team first, since we have a couple of other game projects that we have to finish this year.

Major updates like a new main game mode, customization, and rankings will come by the end of this year, because we would like to implement features based on community feedback first.

A popular wish from the community was, for example, to implement the classic game mode “Deathmatch”, where kills matters the most, since our main game mode at the moment is “Last Stand”, where every player enters the arena with 10 Life points.

So this is, for example, something that we can easily implement in the near future.

In the game’s early access period so far, what would you say is the most important change you’ve made (or decided to make for the future) in response to feedback from players?

We’ve got a lot of very positive feedback and e-mails, where people are writing to us that they love the game. But unfortunately, our player base is too low for an online-only game.

It’s our very first game release, so this is a valuable lesson. For a multiplayer-only game you need the right partners with the right media reach to have a stable player base.

The aesthetic choice of starting matches with purely white arenas that get spattered with blood as the match progresses is a very interesting one- how did that idea come about?

First, it was just a tool to see where on the arenas are the hot and dead spots to improve level design. But later on we saw that this looks pretty cool, and it was a coincidence that we named the game SHiRO (which is the colour white in Japanese).

Do you have a rough final release date in mind for the game?

Do you have plans to launch on any other platforms?

We do not have experience in publishing games on consoles yet, so our biggest expectation is to have a simple and direct access to developer tools which makes it easier to ship games on those platforms. 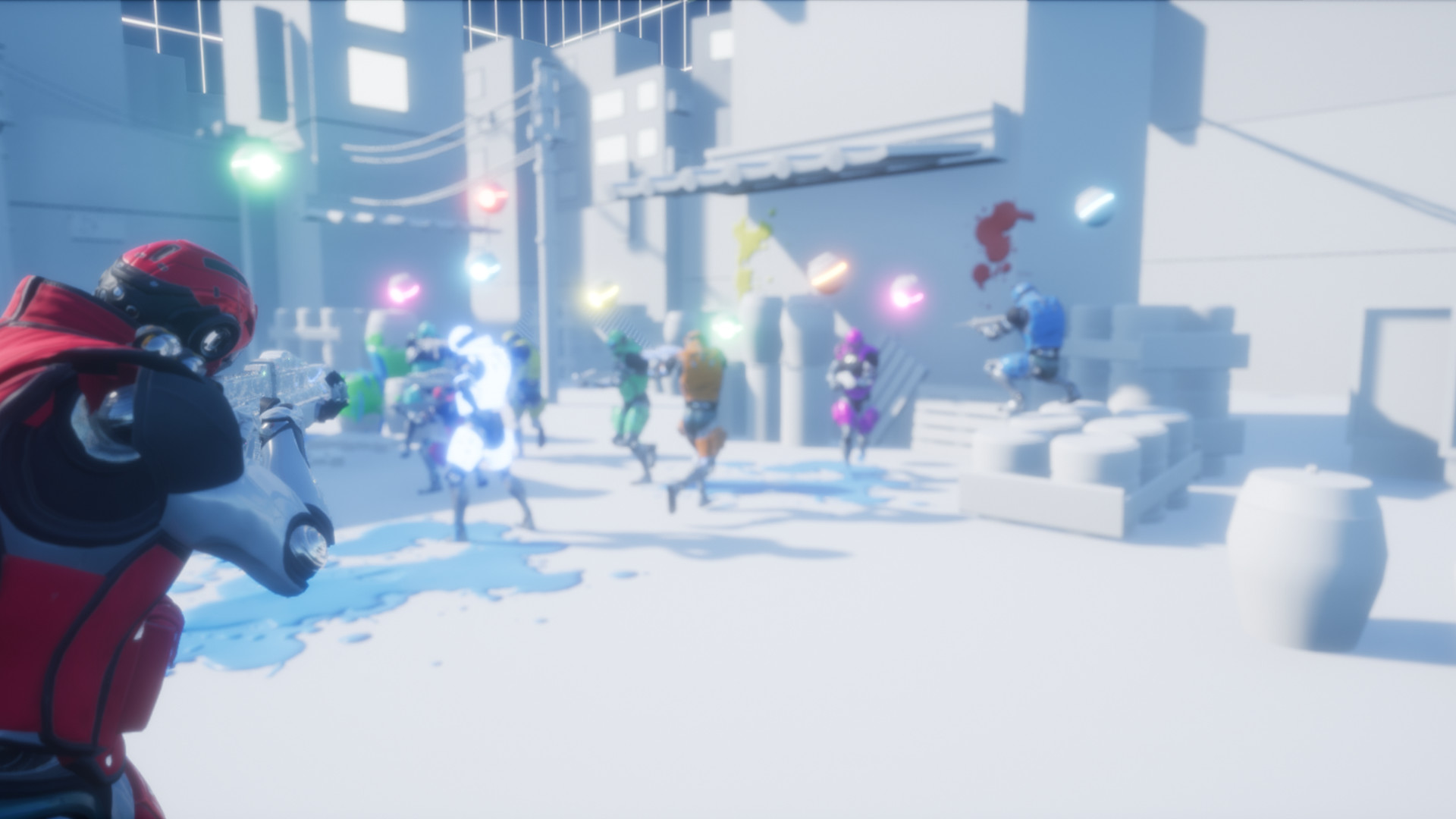 There are several reasons why you choose one console over the other.
Exclusive games, brand sympathy etc. But there is also a very strong reason, which is one of the most important ones. ‘All my friends are playing on console xy’. Once you decide to buy the other console, you decide not being able to play with your friends.

“‘I am buying a PlayStation because all my friends are playing on a PlayStation’ is one key argument that has a great impact on sales. It makes no sense for Sony to renounce that, since they have significantly higher sales figures than Xbox.

So from a gamer’s perspective this is really disappointing, because everyone wants to choose his/her favorite console and being able to play with friends across platforms. But from a business point of view it is comprehensible.

Yes, of course, because you want to play with your friends and there is nothing more disappointing than not being able to play with them because they use a different platform.

We are not big fans of loot boxes and microtransactions, but if they are limited to aesthetics only and do not give you advantages, it’s okay.

It’s too early to plan launches for Stadia, but we are very interested in developing a game for this platform.

Do you think Google’s Stadia has a future specially given the infrastructural issues?

Google’s Stadia definitely has a future, especially by letting players jump right into the game after seeing a trailer on YouTube or during watching a YouTuber playing the same game.

Of course, there are a couple of infrastructural issues, but technology will improve over time, making this more accessible for everyone. 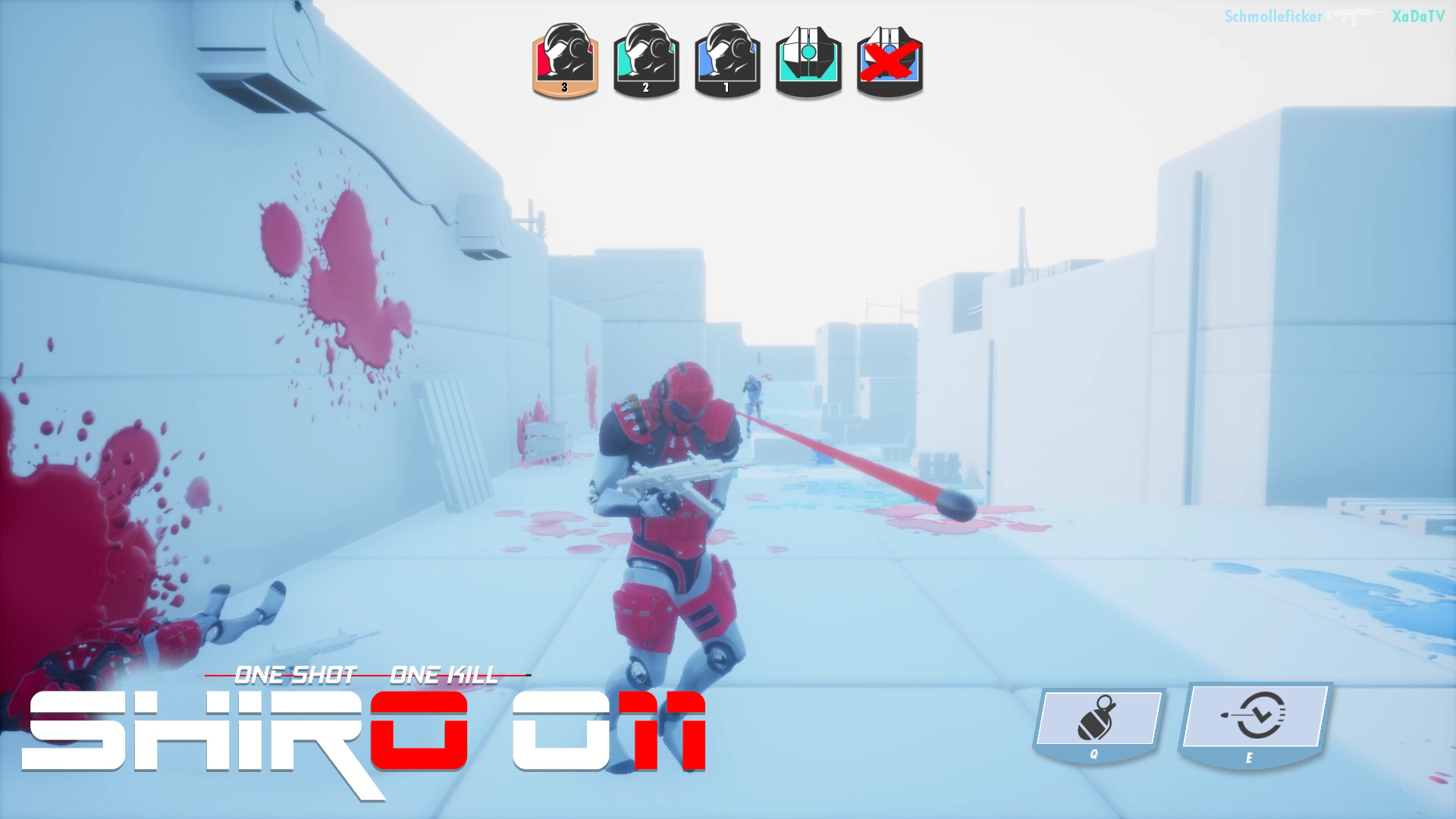 "It’s too early to plan launches for Stadia, but we are very interested in developing a game for this platform."

It depends on how much they will charge the gamers for their service. Nevertheless, it’s a huge advantage for developers if they can focus on specific specs, because it’s easier to optimize their games to get everything out of the hardware.

We expect great consoles and the very first cloud gaming platform, which comes to stay.

We think that the hardware will be quite similar, but as always the hardware is not the only thing that matters, because good content is what matters most.